Sure, he may be the least secret agent on the planet, but 007 has swagger. Bespoke suits, enough Aston Martins to drive into the river here and there and all the gadgets a tech bro could ask for, he’s pretty well-equipped. Not for clandestine work, obviously, but that’s beside the point by now. As apparently is any semblance of a release date for No Time to Die.

Still, as the 25th instalment hovers waiting in the wings, we can get our fix horologically-speaking with a wristwear retrospective. Because if there’s one definitive James Bond accessory it’s not the guns, the cars or the problematically objectified women – it’s his watches.

In Ian Fleming’s original incarnation, Bond was a Rolex man, but as of Goldeneye he switched allegiance to Omega – in case you missed the painful line in Casino Royale – with a good number of other timepieces thrown into the mix. Like a DB9 to a Fiat 500 though, not all wristwear is born equal.

Here then are our picks for the coolest Bond watches ever put to celluloid. 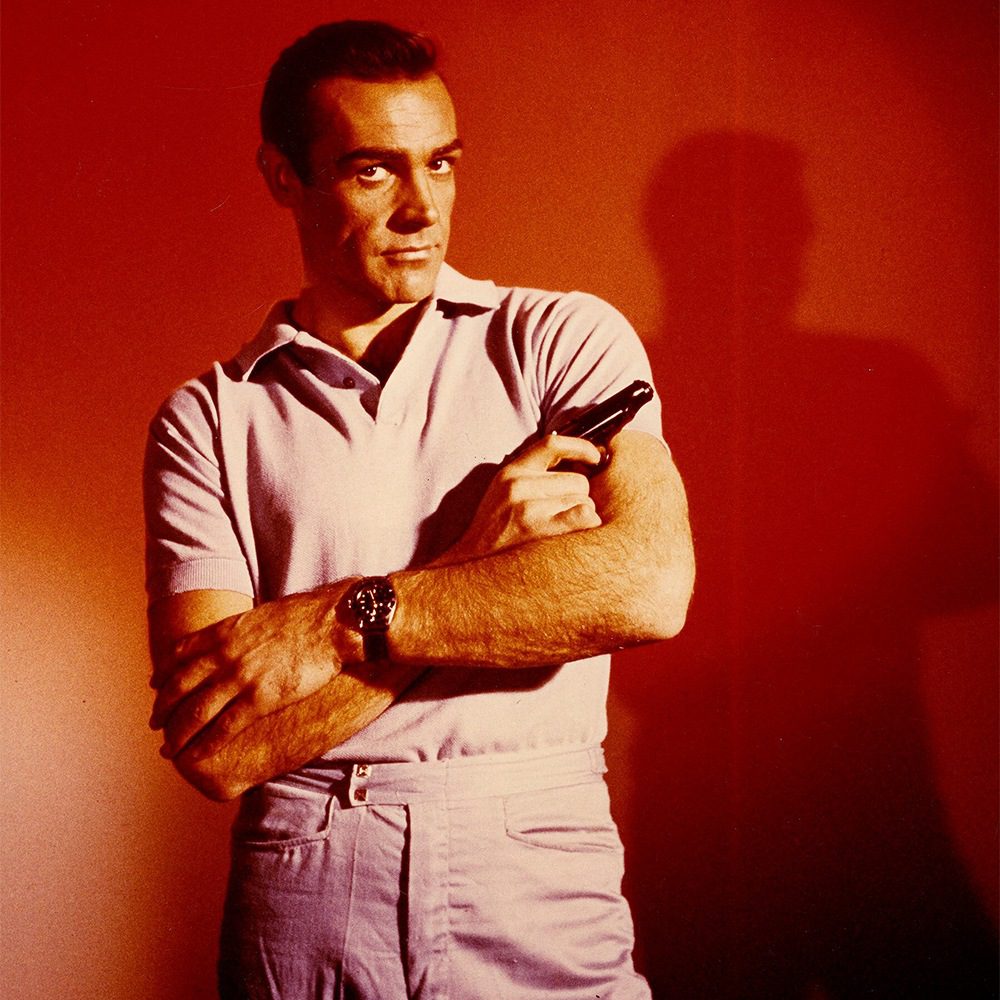 While most watches on film need to go through some kind of approval process, the Submariner included in James Bond’s debut big screen outing had one thing going for it: it was the personal watch of the late, great Sean Connery. It began a relationship that, until Omega got in on the act, cemented Rolex as the superspy timepiece.

The watch itself is a rarity. It was produced for just four years between 1955 and 1959, in large part due to its tropical dial, a finish that faded notably over time. Rolex considered it a defect; collectors have since declared it the most desirable trait a Rolex can have. Go figure. If that weren’t enough, the 6538 appeared again over the next two years in From Russia With Love and Goldfinger, famously paired in the latter with Bond’s iconic white dinner jacket. It’s still the watch for Bond purists, though they’d have to be monied ones. Prices for these bad boys are up there with some of the most important Rolex models around. Think anywhere between £50,000 to £150,000.

If that’s a bit rich for your blood, the Submariner was refined slightly last year and provided you don’t mind a potential wait (especially for the steel models) you can get one for £6,450.

Film: No Time to Die Has product placement ever been more egregious? Probably not outside of a running gag, no. Did it work? Definitely.

When Casino Royale came out, the 300m Professional – with its blue, wave-engraved dial and rugged diving style – became an instant hit. It made sense too. It not only had the class of a respected watchmaker, but was also suited to high-octane action. It’s been the de facto Bond watch ever since. The latest version though, designed specifically for No Time to Die, is arguably the best yet. Playing up Bond’s military history, it’s part diver, part field watch, even to the point of including the Ministry of Defence broad arrow front and centre. It has the modern, faceted Seamaster 300m bezel introduced a few years back, but it’s black and beige colour scheme is more suited to fatigues than than a wetsuit – though still looks killer with a dinner jacket. This Bi-Compax chronograph was a definitive 1960s timepiece with its high-contrast white subdials on black. It also might be a bit hard for casual viewers to recognise in 1965’s Thunderball.

The unique version in question has an entirely difference case made specifically for the film; a massive chunk of solid steel that blocks the chronograph pushers. What that means for depth resistance, only Breitling’s prop team knows. It does however (according to Q branch at least) house a Geiger counter. Yeah, we can’t see it being brought back into production. The standard Top Time, on the other hand, was reintroduced by Breitling last year in a slightly different dial variation. Rather than straight-up white on black, they opted for the ‘Zorro’, with black triangles echoing the swashbuckler’s legendary mask. The Pulsar was the world’s first fully electric watch. Whether that’s a good thing or not, we’ll leave up to you. However, the design’s origins are undeniably cool. When Stanley Kubrick needed a clock to suit his Jupiter-bound spaceship in 2001: A Space Odyssey, he went to Hamilton, who provided him with a cutting-edge electric clock. Six years later, Hamilton downsized the tech to wristwatch proportions and in 1973 it found its way into Live and Let Die.

You can see the Pulsar pretty clearly in the scenes in Bond’s apartment (where he also gets handed a Rolex Submariner) and it set a short-lived trend for LED watches to follow, including those from Seiko. The Pulsar these days goes by the name PSR and is still readily available with a slightly tweaked yet easily recognisable design. It remains cool, futuristic and, while it’s definitely not the only electric watch out there, is one of the scant few a watch collector can get away with.

Film: For Your Eyes Only Bond was no stranger to Japanese watchmaker Seiko even before 1981’s For Your Eyes Only, opting for a couple of the brand’s more tech-forward timepieces. Those particular pieces however wouldn’t do to dive down to a submarine. Enter the ‘Tuna Can’.

Like most of Seiko’s nicknames over the years – Turtle, Sumo, Samurai et al. – the moniker here is pretty self-explanatory. The oversized outer case ups water resistance with gaps to allow you to use the diving bezel and the whole thing is designed to be strapped over a wetsuit. This 49mm beast of a watch can hit depths of 600m – which back when it was released in 1975 was insane – and is incredibly rugged. What looks like gold is actually titanium nitride, an extremely hard ceramic.

If you’re looking for a modern equivalent, Seiko has recently released a few new Tuna models, including a smaller, more wearable number in a safari colourway.