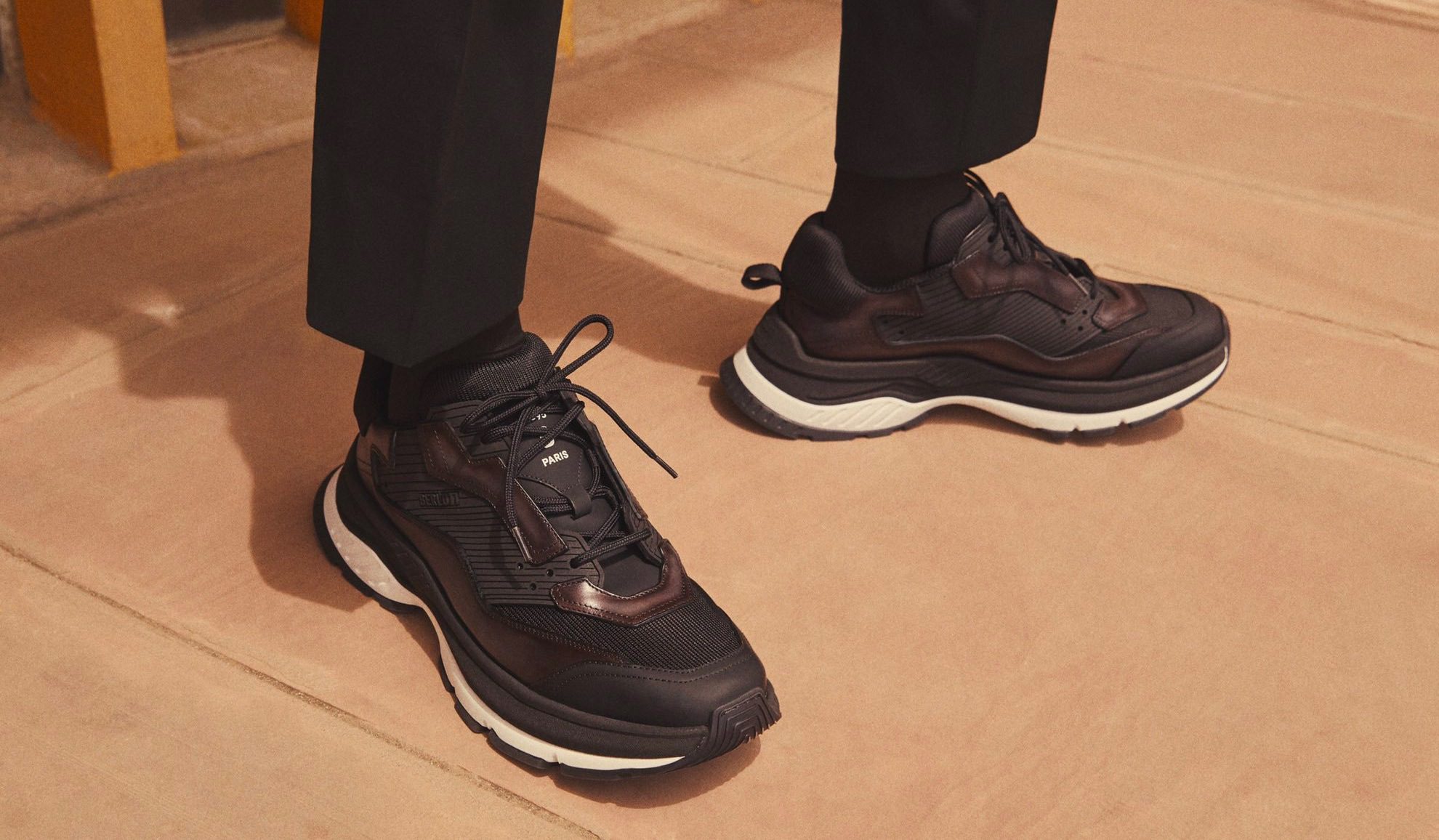 When thinking of investment pieces, sneakers aren’t typically the first thing to spring to mind. A leather jacket, yes; a navy, cashmere-blend suit, sure; but something that’s going to frequently come into contact with pub carpets and rain-spattered city streets? Not so much.

The usual approach where trainers are concerned is to spend somewhere around the £100 mark on a pair of mid-range kicks that’ll wind up demoted to gym or gardening duties come next year. We’re not saying a man shouldn’t have a pair of beaters or two, but if he’s willing to increase the upper threshold of his sneaker budget, there are bountiful rewards to be reaped.

The luxury sneaker market has seen exponential growth over the last decade. As sports footwear has cemented its place as part of the modern man’s day-to-day wardrobe, spending upwards of £200 on a pair of high-end sneakers has become a perfectly reasonable style splurge.

When Common Projects’ now-iconic Achilles Low sneaker first hit shelves in 2009 it was an instant success. But why? It was, after all, just a simple, minimalist leather sneaker, right? Well, yes and no.

The Achilles Low is certainly minimalist in terms of its aesthetic, but it’s anything but simple. A silhouette pieced together in Italy, using traditional shoemaking techniques, it filled a gap in the market between tennis trainers and high-end dress shoes. A piece of footwear capable of elevating a T-shirt and jeans, while also looking the part with tailoring.

Following its success, the New York/Italian label expanded its range and now applies the same level of design excellence and build quality to everything from Chelsea boots to chunky sneakers.

Wabi-sabi. For those unfamiliar with this Japanese term, it represents the belief that true beauty lies in imperfections. It’s the cracked pottery, glued lovingly back together. It’s the rusty old bicycle that still gets you from A to B. And, if Golden Goose Deluxe Brand has anything to do with it, it’s the perfectly worn-in sneakers you’re wearing on your feet.

Not everyone gets Golden Goose sneakers, but perhaps that’s part of the allure. These are shoes made from fine Italian leather that come beautifully battered right out of the box for that authentic vintage aesthetic. They’re not cheap either, which is what some consumers struggle to get on board with. For those who subscribe to the wabi-sabi way of thinking, though, it makes perfect sense. Golden Goose’s sneakers’ aren’t pristine and perfect, and that’s what makes them special.

Gucci’s contributions to the world of footwear haven’t traditionally included much in the way of sneakers. However, that (along with many other things) changed when Alessandro Michele took the reins back in 2015.

Michele’s colourful, 1970s-inspired designs and gender-neutral runway shows earned him plenty of praise from the critics. But it was his introduction of the house’s signature sneaker, the Ace, that marked him as a design master in the eyes of the mainstream masses.

Gucci’s Ace sneaker, with its iconic stripes and vibrant embroidery, was an instant classic and was followed by a whole slew of trainer releases, including trend-baiting oversized kicks, retro runners and beyond. It was a move that helped put the Italian label’s name back on the map for footwear, positioning it as one of the leading forces in luxury sneakers.

It’s been 120 years since Alessandro Berluti put his name to the house’s first pair of shoes. In the time that has elapsed since, Berluti (featured image, top) has become synonymous with exquisite craftsmanship, exceptional leather and the most beautiful, deep and rich patinas to be found anywhere on earth.

In the early days, Berluti’s output consisted almost entirely of dress shoes. But as the times have changed so has the brand’s focus, with high-end sneakers now accounting for much of its sales.

The label’s trademark Venezia leather features heavily and is what enables the shoes to take on that trademark lacquer-like richness that makes them so unique. If brown isn’t your colour, look out for the brand’s minimalist white options, too.

Based around a fascination with Americana style and an appreciation for Japanese attention to detail and construction techniques, Visvim delivers not only some of the coolest clothing around but also some of the most individual and beautiful luxury footwear.

The FBT is arguably the brand’s most famous silhouette. It takes a fringe moccasin-inspired upper and places it on a high-grade sneaker outsole. The result is a truly outstanding piece of footwear design that has sneakerheads salivating and fashion editors clamouring in equal measures. And that’s before we even mention the label’s Roland running shoe or Skagway canvas sneaker.

It would be remiss of us not to acknowledge that some of Margiela’s footwear designs can be a little… out there. However, we can let all of that slide based on the merits of the Belgian fashion house’s most notable sneaker, the Replica.

Maison Margiela’s Replica model is a premium reimagining of a mid-century, military-issue German Army trainer. Styling is simple, colourways vary from stripped-back to paint-splattered, and materials and construction leave little to desire.

If we were playing the word association game and someone shouted, “Tom Ford!” there are likely many things you would say before arriving at the word “sneakers”. In actual fact, though, while he spends every waking hour in a perfectly cut two-piece suit and Oxford shoes, the former Gucci creative director has a genuine knack for designing trainers.

Ford’s sneakers are everything you would expect from a man who values clean lines, restraint and elegance above all else. They’re subtle, versatile and made using only the finest materials and most skilled labour. Expect supremely high quality with price points to match.