Ape to The Dornoch Firth

Looking out eastwards over the Dornoch Firth sits the magnificent Hilton of Cadboll Stone. Located on the Tarbat Peninsula it’s a Pictish sculpture, dated to around 800AD.

The stone has a number of different depictions on its landward facing side, with perhaps the most interesting displaying a hunting scene of a woman riding sidesaddle. It’s the depiction below this indication of a matriarchal society however that is more recognisable to whisky aficionados. And it’s this carving on the lower third of the stone that has been adopted as the signet of one of the world’s most avant-garde whisky producers, Glenmorangie.

Ape to Gentleman headed to Ross-shire, the home of Glenmorangie, to learn more about the brand, its distillery, the people who work there and its latest creations.

A Brief History of Glenmorangie

Morangie farm and brewery was acquired in 1843 by Mr. William Matheson. Not long after, Mr. Matheson set in motion his mission to convert the brewery into a distillery, equipping it with two secondhand gin stills. The location of the Tarlogie springs relative to the farm provided Mr. Matheson with the perfect conditions to create a product that would go on to become one of the world’s most distinguished single malts. Overlooking the Dornoch Firth, the backdrop is stereotypical of a single malt distillery in Scotland: picturesque, dramatic and stunning.

Fast forward to the latter part of the 20th century and the distillery, under the stewardship of Dr. Bill Lumsden, continues to thrive. And whilst in-keeping with the traditional methods and practices required by the SWA (Scottish Whisky Association), the operations at Glenmorangie are cutting edge, harnessing time-tested techniques with innovative new solutions. The tallest stills in Scotland, for example, allow for Glenmorangie to pioneer the maturation process, delivering the purest spirit and, as a consequence, the purest taste.

The unerring efficiency of the distillery operation enables Glenmorangie to sell over 500,000 cases annually worldwide, to a highly knowledgeable customer base. To this end, the brand holds the title of the best-selling single malt in Scotland since 1983. With 98% of its output being traditional whiskies, such its acclaimed 10-year original, the remaining 2% are drastically different drams. 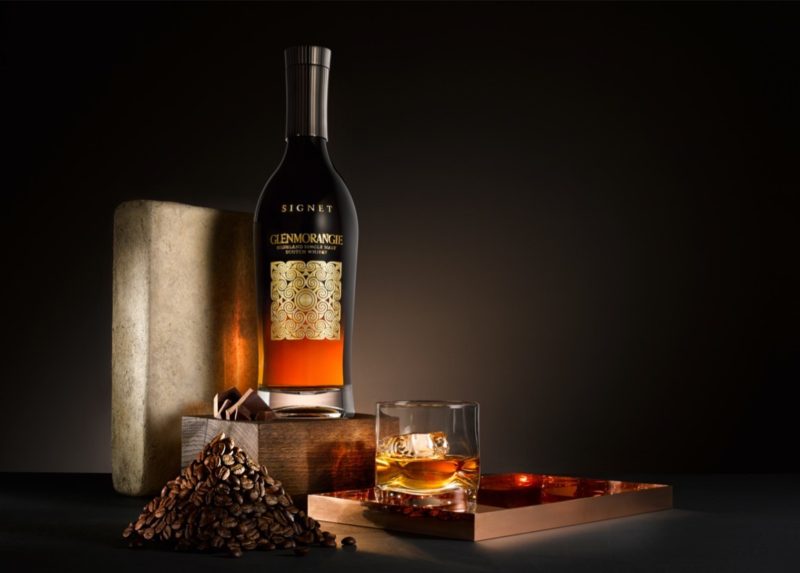 Not many whiskies can be described as trailblazing, but that’s exactly what Signet is. This chocolate malted barley roast expression is something never seen before in the world of whisky. It was this very reason that the SWA were not so keen to allow this to be launched to the world. Not only was this superb interpretation almost banned, it’s incredibly difficult to manufacture.

“Processing it through the distillery, grinding it and doing it in the mash tun is very, very tricky. If we get this stage right, that’s exactly where the flavour is.”

Since the inception of Signet, the Men of Tain (the select craftsmen entrusted with the secrets of the Glenmorangie distillery) have toiled with its sophisticated mechanics and behaviour within the mash tuns. However, this undertaking is made easier with the knowledge passed down by the five generations of the Men of Tain coming to the fore as technique, innovation and expertise collide. Dr. Lumsden goes on to highlight that Signet in itself isn’t so much a blend of sorts, but more of an assemblage, similar to wine.

The four major constituent parts are as follows.

The assemblage, with its cornerstone chocolate malt spirit, is “blended” in quantities unknown to the public and remains a closely guarded secret kept well within the walls of Morangie farm. 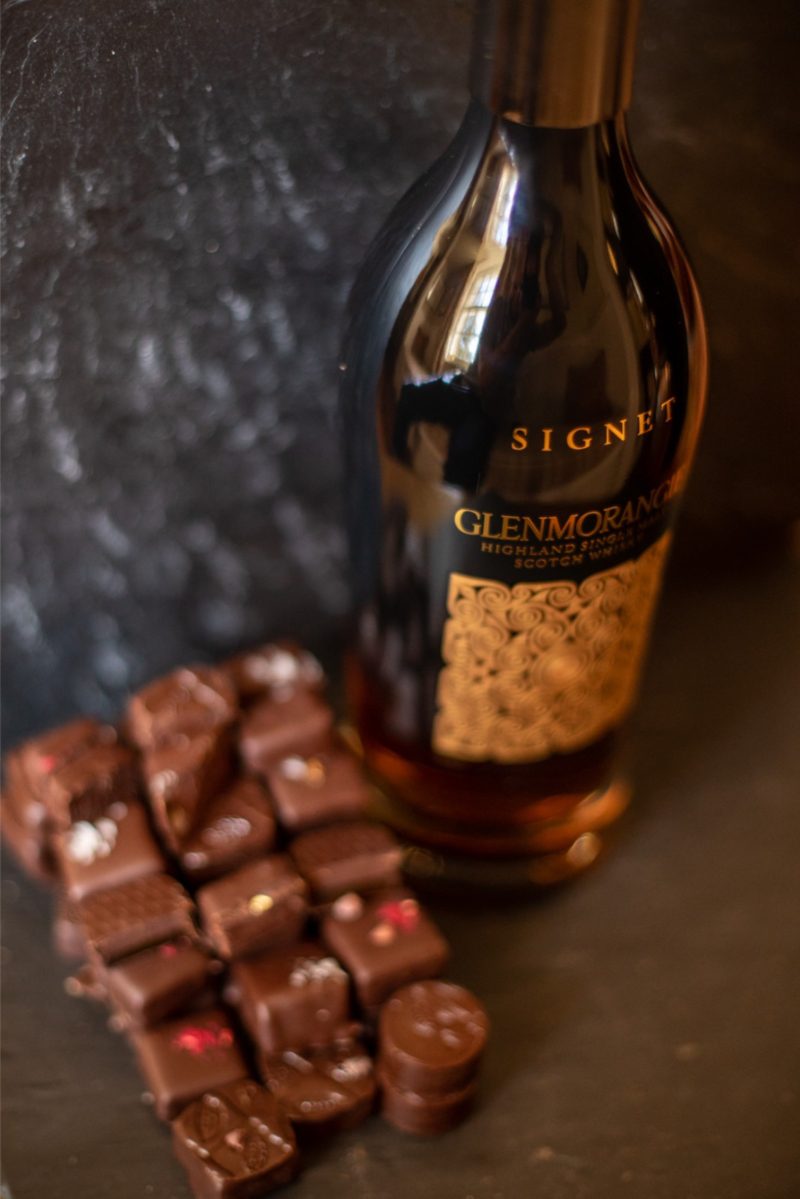 Signet has no age statement but, based on research from other sources, the average age of the assemblage when taking into account each of its constituent parts is said to be circa 21 years. Dr. Lumsden was keen to emphasis that he “unequivocally disagree[s] that old means better. Personally, I like 8- to 12-year-old whiskies where the work isn’t down to just the casks.” 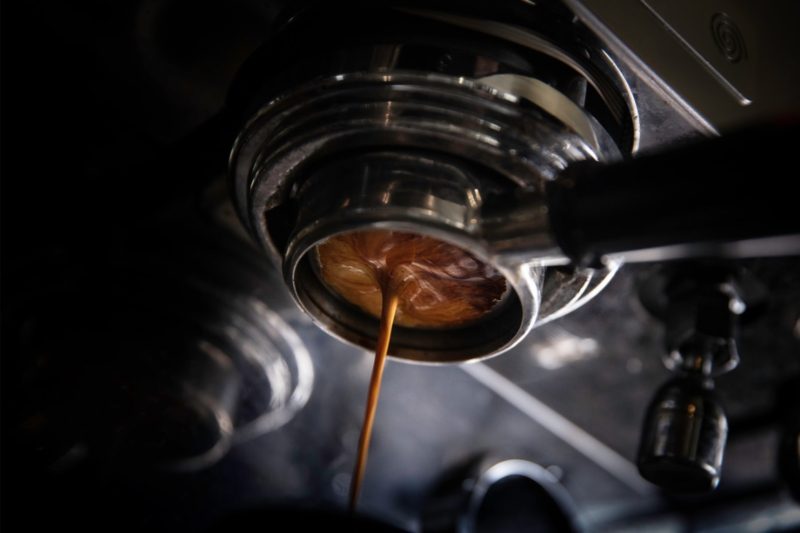 Whilst I’m unable to decipher the specific quantities of each of the constituent parts, I can give you an indication of the end product. It is… different. The colour is dark amber and the nose is superb. Sticky dark fruits, waves of sweet sherry (courtesy of those Oloroso sherry butts), sultanas and orange zest is followed by tiramisu and dry spices.

The taste is made up of a composition of chocolate, coffee, orange and vanilla. It’s perfectly balanced and brilliantly composed. I found an overwhelming finish of chocolate, sherry and spiced fruits which left me wanting more and more. 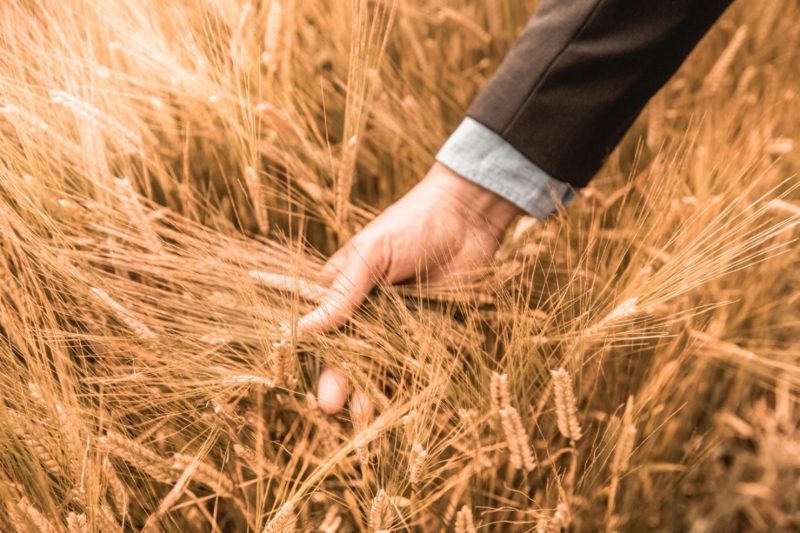 Dr. Lumsden’s motivation behind leaving the malted barley to roast just that little bit longer in the mash tuns came from two principal inspirations: coffee and (you guessed it) chocolate. And to learn more about his reasoning, during our stay at the charming Glenmorangie House, we were treated to an immersive masterclass in chocolate and coffee by world renowned chocolatier William Curley and the globally-recognised barista Claire Wallace. These experiences perfectly illustrated the inspirations Dr. Lumsden drew upon when creating this one-of-a-kind whisky. The Glenmorangie distillery is expanding. A new distillery is being constructed on-site as we speak, providing further opportunity for a range of new innovative single malts. This, coupled with the marriage of Dr. Lumsden’s and Glenmorangie’s parent company LVMH, provides the perfect storm to further Glenmorangie’s position as Scotland’s whisky pioneers.

What became apparent during my time at the distillery was the passion behind the inspiration from the people of Glenmorangie. From the shift operators working on the mash tuns and stills, some with over 40 years’ of experience, to the Global Brand Ambassador, Karen, and of course the Master Distiller and Head of Whisky Operations, Dr. Bill Lumsden – the pride and satisfaction in their craft and creations was plain to see. 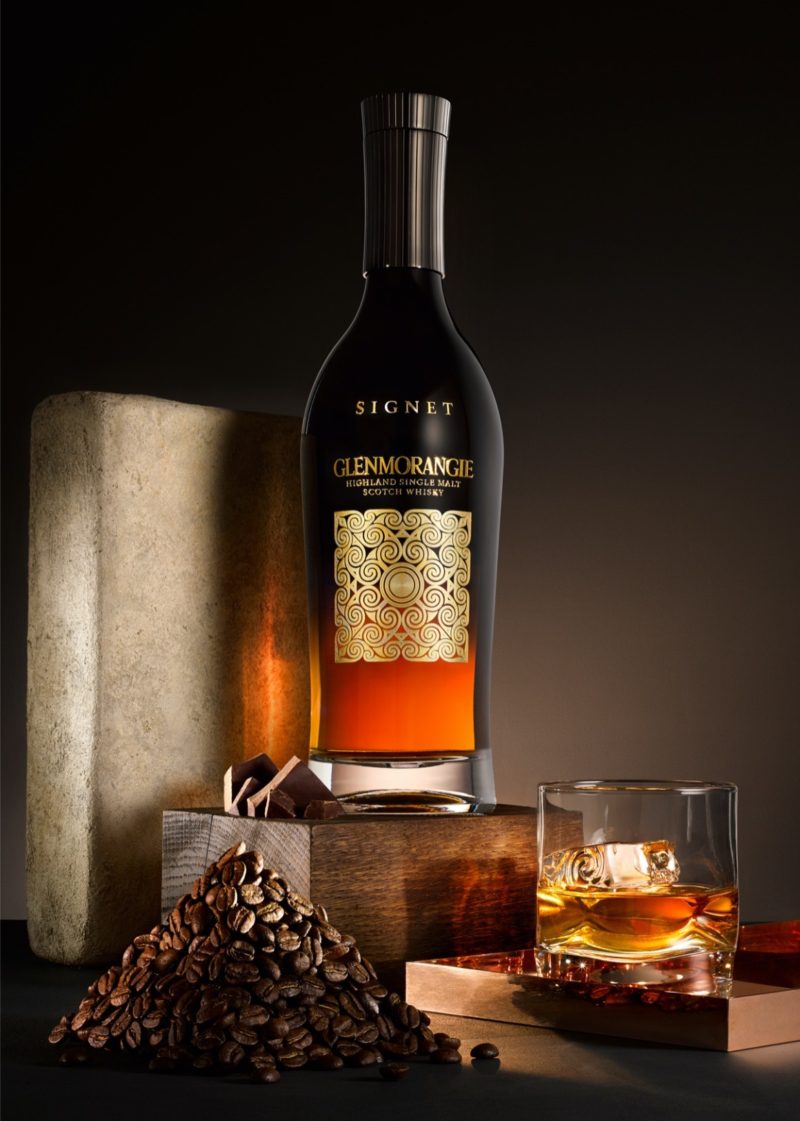 The long and short of it is that Signet whisky was created and presented to make an impression. The look, the considerable feel of the bottle in hand, the significant weight of the stopper, the nose, the palate… all combine to deliver a fully formed and expertly realised package which is befitting of the mystique it creates.

As we approach the festive season, I can’t think of a better dram to see out Christmas Day in front of a warm fire wearing your new Christmas socks.

Visit glenmorangie.com/en-gb/our-whiskies/signet to learn more, or to buy visit clos19.com where each bottle of Signet is priced at £168.

Straight Up: A Gentleman’s Guide to Vodka