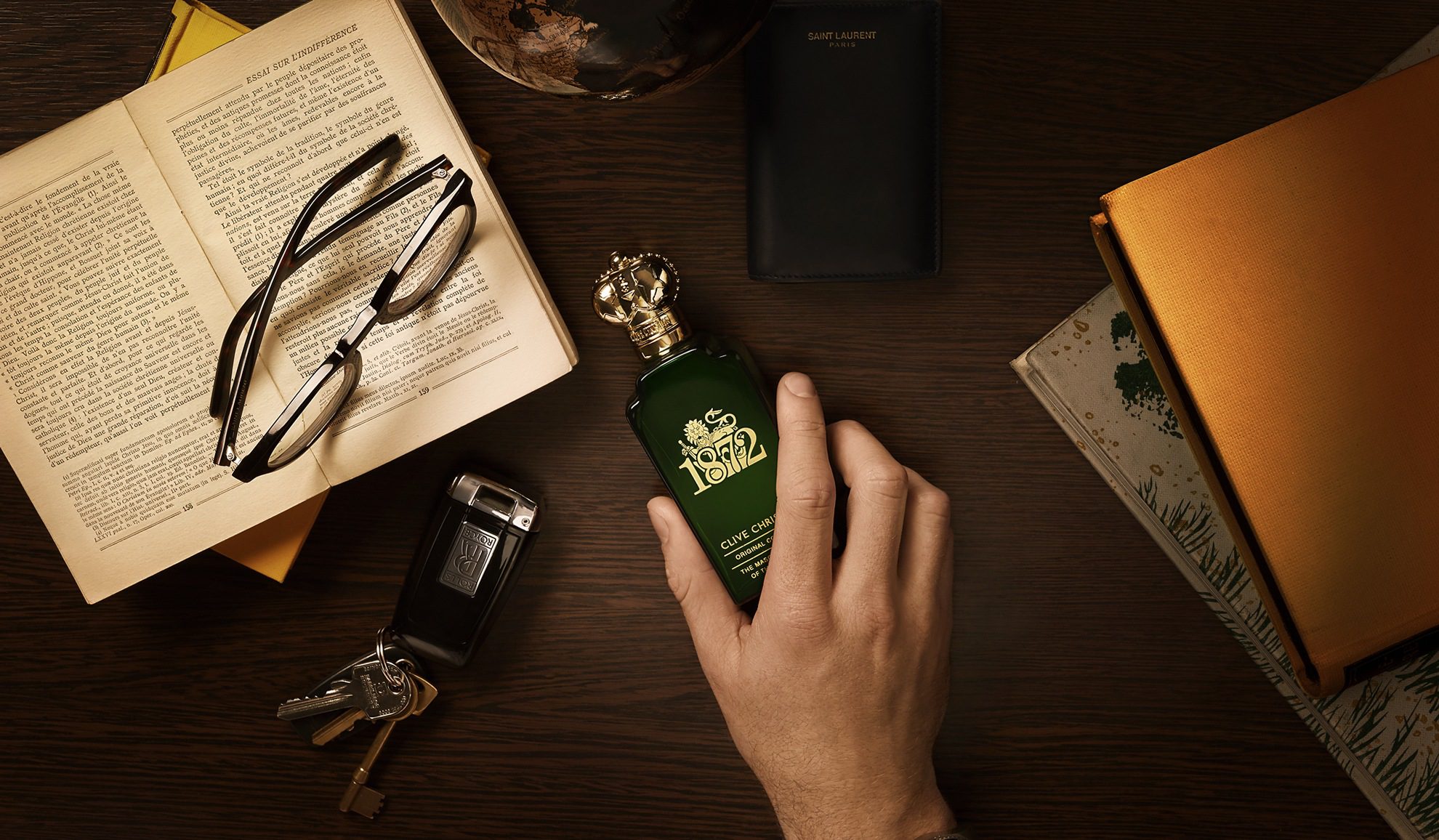 Discovering that someone else wears the same scent as you is kind of underwhelming. OK, if you like the person it’s bearable, but many iconic fragrances have been killed by bosses from hell, idiot classmates and irritating colleagues. Fragrance is often a very personal, considered choice and we like to pretend we’re the only ones who know about it. Of course, this is pretty unrealistic given that the major brands lurk on every continent, in every duty free, in every department store across the globe. Retaining exclusivity for the major houses comes down to restricting the availability on a single line or special collaboration and customisation services in the form of engraving or ribbons to make your bottle seem unique, while pumping the rest of the product into as many outlets as possible: it’s boring and predictable. Meanwhile, a truly bespoke scent is so expensive it’s reserved for kind of people who snap up a Tom Ford suit on their lunch break.

These days consumers are often missing a sense of discovery and a product that feels personal to them – and this is where the niche, luxury fragrance house comes in. The shopping experience is usually a more rewarding one with well trained, knowledgeable staff able to guide you through the collection. These brands tend to ignore gender marketing, eschew paying dead-eyed celebrities megabucks to front their creations and expect the customer to judge a scent on the quality alone (plus the sexy packaging, naturally). Clearly, you will pay a premium for the privilege of wearing something less people have access to. Still, it’s better than catching Dave from accounts wafting around in your signature scent.

So, if you’re in the market for something both interesting and personal, here’s our rundown of some of the finest – old and new – luxury perfume houses.

During the 1990s perfumer Frédéric Malle became frustrated with the commercial direction of some of the major perfume houses. To help preserve the creativity in the industry, he established the Editions de Parfums Frederic Malle as a “publishing house for the industry’s very best Perfume Designers”. Over the years the house has given a platform to some of the biggest names in the business including Dominique Ropion, Jean-Claude Ellena and Edmond Roudnitska (the fabled creator of Dior Eau Sauvage) and collaborated with fashion houses such as Dries Van Noten and the former head of Lanvin, Alber Elbaz.

The collection now contains a veritable list of modern classics. If you get the chance, the standalone boutiques are worth a visit too. One of the most well-known scents in the collection, Musc Ravageur is powerful, sweet and sexy; heavy on vanilla, spices and animalic musk.

Sometimes it feels like Clive Christian perfumes are more well known for diamond studded lids and gold-plated bottles than for the actual juice inside. We’re not always convinced by the old, “it’s so pricey, it must be good” theory. Certain natural ingredients, like orris or jasmine, might cost more than gold but truthfully, beyond a certain point you’re paying for the name and the halo of mystique. Still, the perfume heads approve, so if want to drop £500 on a good scent, Clive Christian won’t disappoint.

It’s a house with a history that stretches back to Queen Victoria’s reign. In 1872 she gave permission for the image of her crown to be replicated on the bottles of The Crown Perfumery. Clive Christian acquired the company and archives in 1999 – and set about making reassuringly expensive scents that often come in pairs. The 30ml bottles are a good entry point for those on a budget – use sparingly. From the original collection launched in 1999, X is a woody, spicy vetiver with amazing staying power (due to the high 20% concentration).

Chad Murawczyk and Mindy Yang launched Scent Stories, a collection of 11 scents, in 2014 that’s now grown to 18. Having curated and sourced unique fragrances for private clients since the late 1990s, Murawuczyk had access to some to the top perfumers in the world.

Known for its innovative, abstract fragrances, it’s the scent destination for customers who want something modern and conceptual. With evocative names like Moon Dust, Long Board and Dahab, each scent is like like a chapter in a bigger story and a long way from stuffy, traditional perfume. Imagine a chopping board full of fresh herbs and produce and you’ve got this: fresh, green and very edible.

The French fragrance house was established in 1760 and is still run by the Creed family, with Olivier and son, Erwin, currently at the helm. It’s long attracted an exclusive patronage of Royals and celebrities alike and creates scents that the rest of the market scrambles to “emulate” (read: shamelessly copy). Silver Mountain Water, Green Irish Tweed and Millésime Imperial are all solid performers that deserve their spot in any gentleman’s collection. Perfumer Killian Hennessey comes from good stock: he’s part of the famous Cognac family and the “H” in LVMH (Louis Vuitton Moët Hennessey). He swerved joining the family business to concentrate on bringing his own passion project to life in 2007: a luxury fragrance house. His innovative designs have also included scented cuff links and accessories. Behind the scenes, he works with big names like Alberto Morillas. Since the early days his fragrance bottles have been refillable, so you only need one – unless you want to collect them all…

Try: Back to Black, Aphrodisiac Honey and tobacco are not the most likely combination but this works like catnip – on some!

Before Swedish/American Jan Ahlgren founded New York-based Vilhelm Parfumerie he was working in fashion. Then, in 2015, a collaboration with perfumer Jerome Epinette to create scented leather accessories led to the swift decision to establish his own fragrance label. Packaged in squat bottles with signature orange caps and simple labels, VP is an exercise in minimal luxe. Cire Trudon are known for their cult scented candles but the fragrance line still flies a little under the radar. We were surprised when the fragrance collection launched with seven entirely new scents, and not eau de parfum versions of the home fragrance lines (we’d love the chance to wear Ciel, but there you go). Sophisticated in scent and design, there’s a fragrance here to suit even the most discerning of tastes. Clove, benzoin and myrrh are the main components in smoky, spicy Olim.

The Perfumer’s Story by Azzi

Azzi Glasser is known as the private perfumer to the stars. She’s spent much of her career creating bespoke scents for private clients including Hollywood actors Orlando Bloom, Tom Hardy, Jude Law and Johnny Depp. She’s also created fragrances for Topman, Bella Freud and Agent Provocateur and London hot spot, Chiltern Firehouse. In 2015 she launched her signature collection and has since collaborated with creatives such as Rankin, James Lavelle, Jonas Äkerlund and Kingsman. She matches her scents to characters and style to help customers navigate the collection. Bookworms who love the nostalgia of vintage paperbacks will appreciate this earthy patchouli accord.

The British answer to Creed is Floris London. It was founded in 1730 by Juan Famenias Floris, and opened his first store at 89 Jermyn Street, where it still stands today, run by his direct descendants, the Bodenham family. Floris obtained its first Royal warrant in 1820 for a smooth comb made for King George IV. Winston Churchill wore Stephanotis and Special No. 27, whereas Bond author, Ian Fleming, preferred No.89. These are classic perfumes, steeped in heritage. Vanilla and lavender with a fresh bergamot opening and spicy undertones of clove. It’s rich and smooth in equal measure.