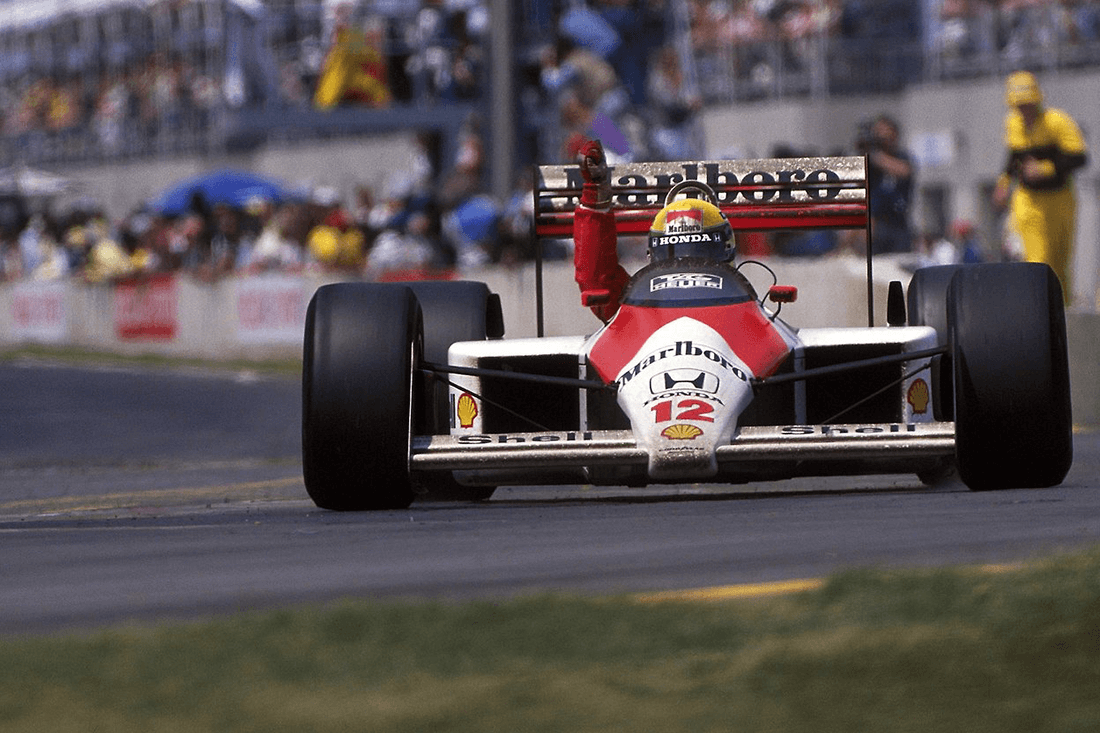 Watches and motorsports have always been close bed fellows- out of the 11 teams competing in last year’s Formula 1 (F1) championships, only four were without a watch sponsor. Following on from Ape’s British Grand Prix guide to Silverstone, we have investigated more about a few F1 icons and the watches that defined them. 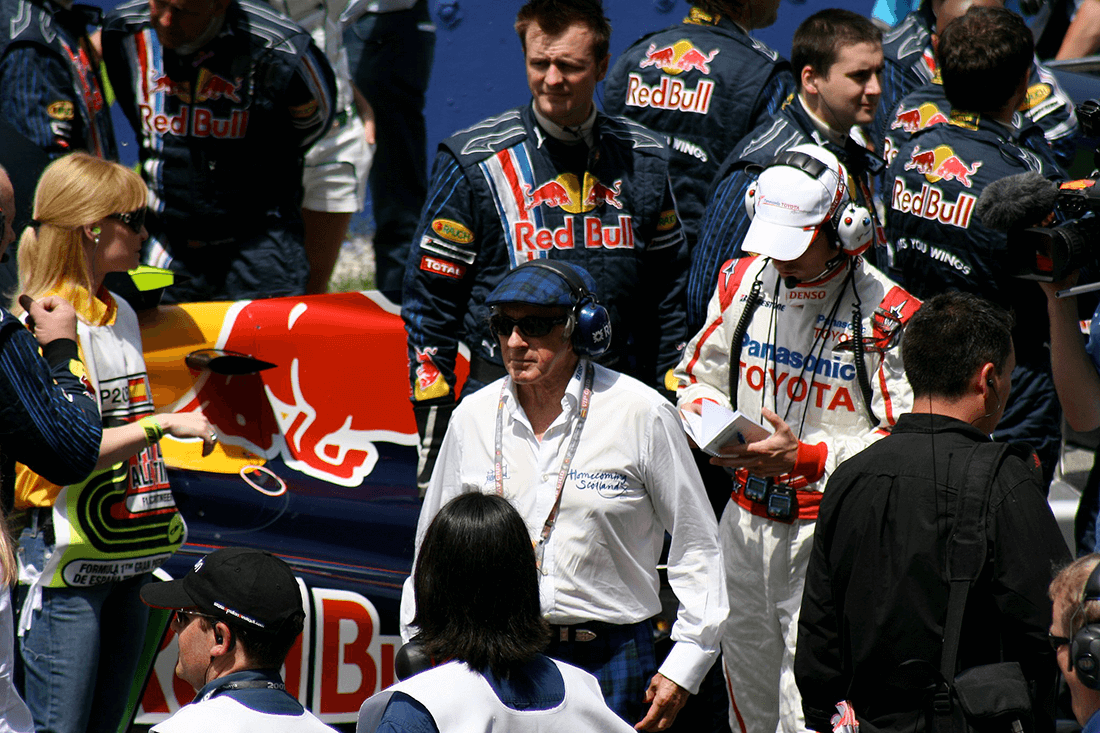 Sir Jackie Stewart- the Flying Scot with a cool head

Three-times F1 World Championship winner, Sir Jackie Stewart picked up a total of 27 titles throughout his career. A fantastic wet-weather driver, a pioneer for dyslexia awareness and for F1 racing safety, he remains a respected, charismatic figurehead for the sport and received his knighthood in 2001. Stewart also happens to be one of Rolex’s longest-serving ambassadors, thanks to a relationship that stretches back five decades. 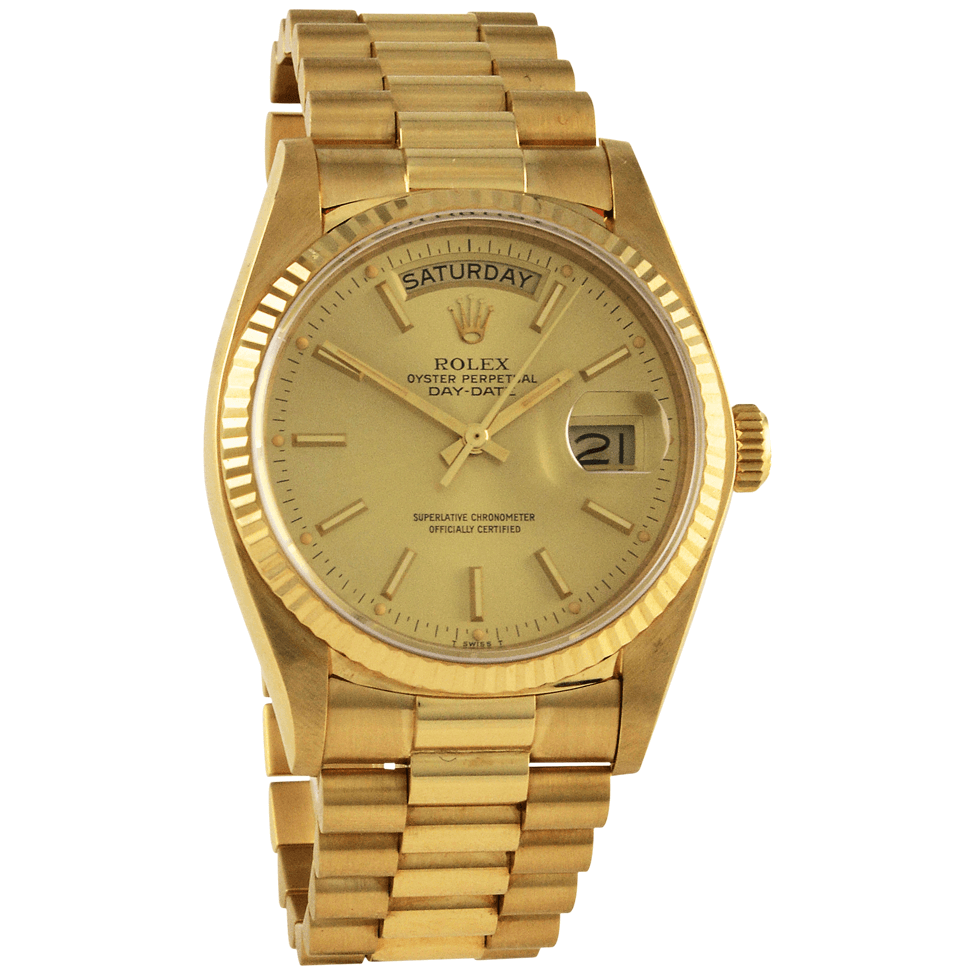 The Flying Scot bought his very first Rolex with money he earned for qualifying in the Indianapolis 500. It was a yellow gold Day-Date. His team owner drove him into Houston to choose it and decided that it needed a diamond-set dial added while the bracelet was being adjusted, to celebrate the occasion properly. Not the showy type, Stewart promptly changed it back. 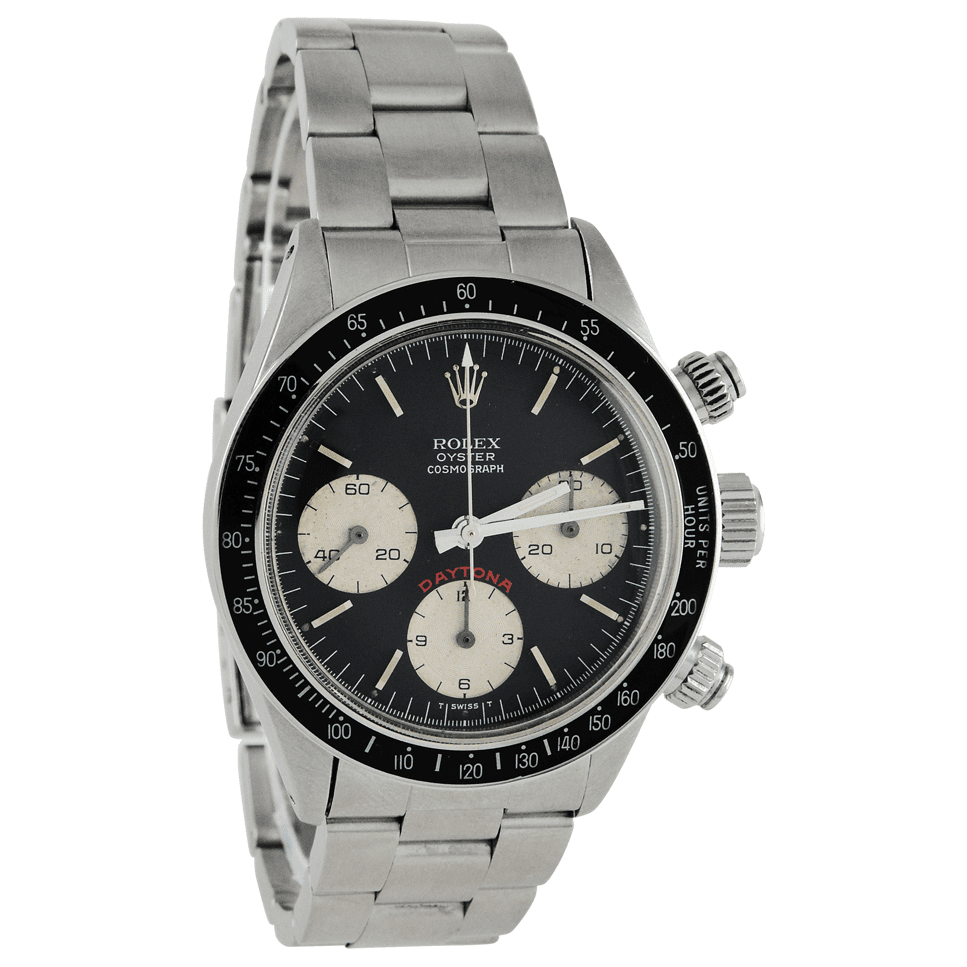 Since then he has been clocked sporting a steel Rolex GMT Master, one of his favourites, as well as the Cosmograph Daytona, which he received when he won his second of three Monaco Grand Prixes in 1971. Introduced in 1963, the timepiece was designed with professional racing drivers in mind. The watch remains a favourite with Stewart and in 2016 Rolex presented him with their updated version, with the words “1966 – 2016 50th Anniversary 1st F1 Win Monaco GP” engraved on the back. Best enjoyed with a tartan flat cap and aviator glasses.

Ayrton Senna- the Magic Man who broke the world’s heart

Still considered one of the best F1 drivers of all time, Aryton Senna joined the McLaren-Honda team with would-be rival Alain Prost in 1989. Not only did Senna fit the archetypal racing hero, but he actually wore TAG Heuer watches and had a large personal collection of his own. The first of many Senna-TAG timepieces – the 6000 Senna – was launched in 1994, only two days before his untimely death in the Italian San Marino Grand Prix. In the months following the tragedy, TAG Heuer released the Senna timepiece and donated money to the Senna Foundation for Brazilian street children. It has proved one of its longest-standing collections, each updated timepiece adopting the iconic red lacquered ‘S’ – the Senna insignia.

Omega’s Speedmaster first made its name in 1969 in another, no less risky, business, when it survived the journey to space while strapped to Buzz Aldrin’s wrist, becoming the first watch worn on the moon. But in the world of F1, Omega is forever linked with German racing legend Michael Schumacher. With a career that spanned 20 years – in which he won seven World Championships, five of them back-to-back – Schumacher is, going by the statistics, the greatest racing driver of all time. And since becoming an Omega ambassador in 1995, there have been 11 different editions of the Speedmaster celebrating Schumacher’s achievements. 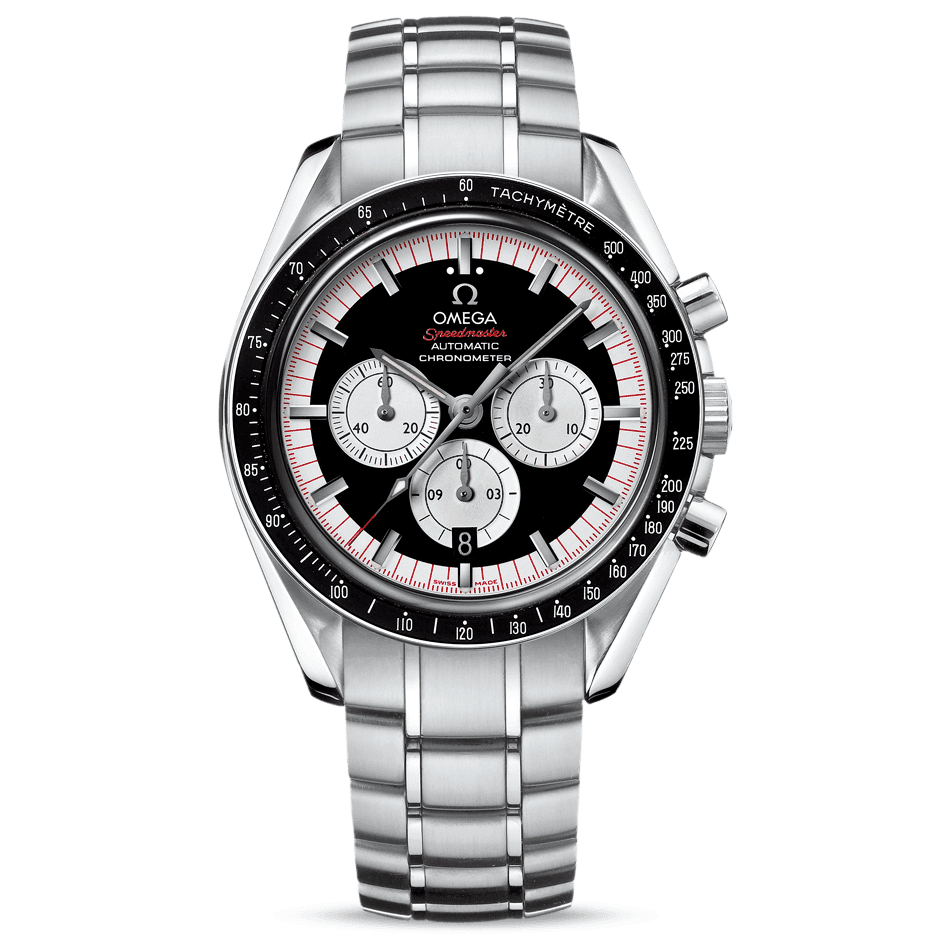 The first joint line was launched in 1996, with fun, bright red and yellow dials that directly referenced his Ferrari team’s colours. Following Schumacher’s win in 2000, the Omega Speedmaster Racing Schumacher World Champion 2000 Limited Edition was released, with another version following swiftly in 2002. Schumacher’s name even made it on to the dial in 2003 when the 18k rose gold Broad Arrow Michael Schumacher was released, in honour of his fifth world championship title. His final Championship title saw the release of the Omega Speedmaster Legend Limited Edition, which boasts an elegant chequered flag on carbon fibre dial, and featured the driver’s accomplishments orbiting the bezel: 250 F1 races, 68 pole positions, 91 victories, 154 podiums, seven world titles.

Brazilian driver Felipe Massa and premium luxury watch maker Richard Mille have been friends since their initial collaboration in 2004. The Brazilian driver was their first brand ambassador, wearing one in every F1 Grand Prix he ever raced in. Mille’s skeletonised, futuristic aesthetic, with distinctive tonneau-shaped, triple-decker cases are directly influenced by F1 and car racing; the watch house consistently uses case and baseplate materials normally reserved for F1 cars themselves.

The RM 006 was the first Felipe Massa watch to launch the collection, a lightweight, radically innovative timepiece able to withstand the accelerations and vibrations associated with high speed racing. Several years and F1 timepieces later, the RM 011 is Mille’s 10th anniversary edition; a titanium number with the brand’s first flyback chronograph, apt for the man who flew back successfully after a nasty accident in 2009.

Lewis Hamilton- Renegade Racer with the Lifestyle to match

When Hamilton moved from McLaren to Mercedes in 2012, that also meant a new partnership between him and Swiss watch giant IWC Shaffhausen. Already a watch aficionado, Hamilton is regularly seen sporting some of the larger timepieces in IWC’s collection, such as the Big Pilot, Aquatimer and Pilot World Timer. All of this you would spot from a quick glance at his Instagram account. 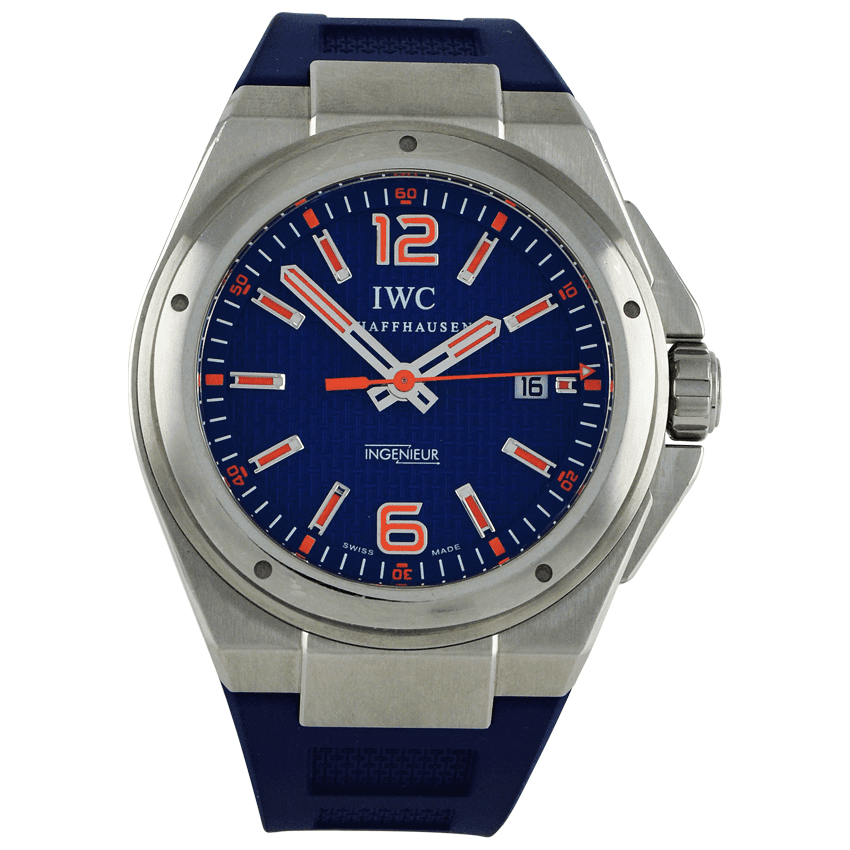 In 2014, Hamilton, with ex-teammate and joint IWC ambassador Nico Rosberg, designed special edition versions of the Ingenieur Chronograph, one of the brand’s most iconic models.  Hamilton’s version features a dense titanium case and matching bracelet, while Rosberg’s has a similar titanium case with a rubber strap in embossed calfskin and yellow detailing. Both watches sport a carbon medallion on the back, engraved with their logos and sourced from one of the Silver Arrow cars used by Mercedes-AMG Petronas.