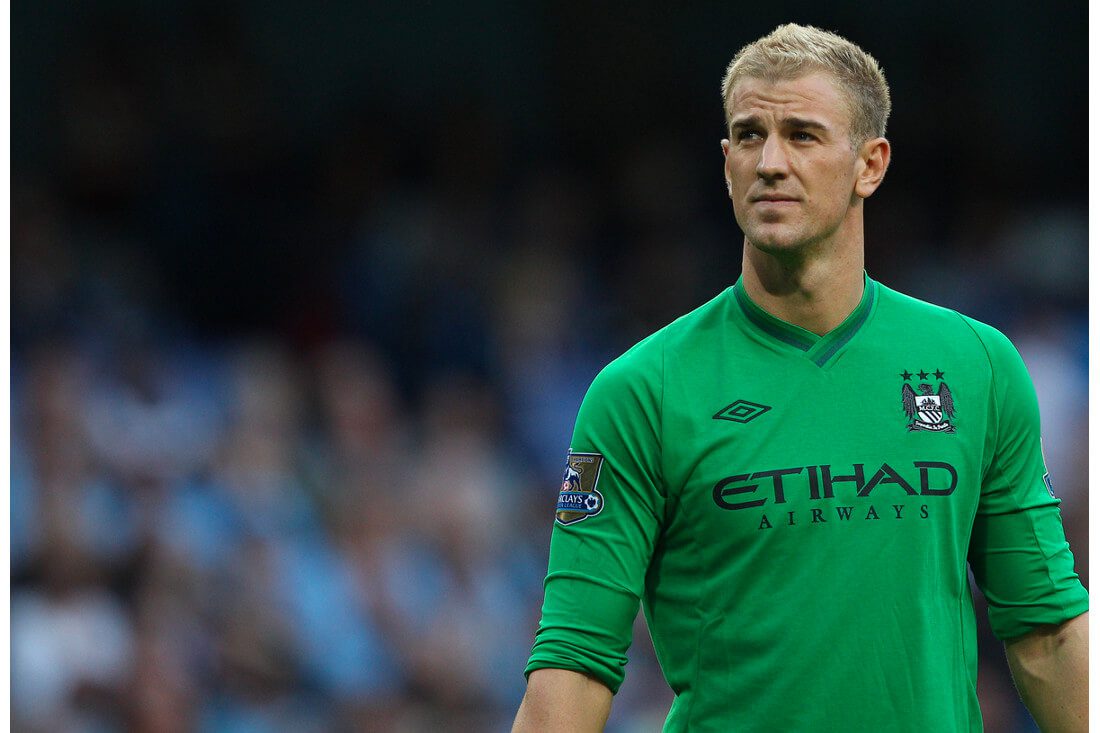 With the new Premier League season recently underway we thought you would appreciate getting to know England and Manchester City keeper Joe Hart a little better. Whether you support Manchester City or not, Joe’s commitment to the English national team and footballing ability certainly earn him some plus points.

CB: How did you get into football? At what age did you first start?

JH: I got into football when I was about eight or nine. My memory is not very good with being young. I’ve got flashes of my love for Sunday leagues and playing football with my friends at primary school. I just got into it because everyone else didn’t. I love all sports, so it’s one of the many that I played.

CB: And when you first got into football did you stand out amongst your friends? Were you the best player? Did everyone think that you would be the Premier League player of the future?

JH: When I first started playing I don’t think anyone ever thought I’d be playing in the Premier League, or for England. I don’t think anyone had any idea, myself included, I just played for the love of it. I was always quite good, I’ve always been quite a lot bigger and stronger than most of the kids, which is a big difference I think when you’re young but it changes as people catch you up. So I supposed I stood out but only for height reasons.

CB: When you were a kid, did you used to play FIFA? Which teams did you choose to play for and which players did you respect as a kid growing up?

JH: When I was a kid, I played for England, they were my idols. I quite liked Arsenal too, Arsenal was my team. David Seaman was one of my boyhood heroes, being a goal keeper and England’s number one. Obviously Peter Schmeichel was a huge influence as well, I think those two were two of the biggest names in English football when I was a boy.

“When I was a kid, I played for England, they were my idols.”

CB: When you’ve got time off training what do you do to relax? Do you have any pastimes?

JH: To relax, I like to go for food, see my friends, play a lot of golf with the boys from training from football. Everyday things, normal stuff, I like to take opportunities as they come as well. I’m quite privileged and lucky that things come my way.

CB: During the off season, obviously you get some time to relax away but do you still have to have quite a strict fitness regime?

JH: In the off season, you don’t particularly need a strict regime, but for me personally I can’t stay still for too long.

CB: Is there one thing that the nutritionist says that whatever happens you can’t eat this? Is it ice cream? Chocolate bars?

JH: No they’re really good actually. They understand that we work hard, so if you really want to I think you could literally do as you please, because we work so hard. But I think a lot of the lads, are quite good because you want to get that one stage better, so your diet is really key.

JH: I like to wash my hair with head&shoulders as it makes your hair feel really clean. Then after I’ve dried it, I use a nice pasty wax. Seems to work for my hair!?

CB: At Man City or England, is that anyone that spends way much more time in the mirror than the other guys?

JH: I think people joke about who spends more time in the mirror but at the end of the day, everyone’s pretty vain. In both teams, we would like to look good. Some are more open with it and some like to do it behind the scenes. I’m not too bad. I know what I’m doing to get myself ready, I’ve done it for years, so it’s a pretty quick routine.

CB: If you hadn’t been a goal keeper what would Joe Hart be doing?

JH: If I wasn’t a goal keeper playing football, I think I would be someone trying to play football because it’s such a good job and I’m so lucky that it has kind of worked out for me that what I want to do is what I am doing.

CB: If you had the chance to win either the Champions League or the World Cup, which would come first?

JH: Both! I wouldn’t want to win just one, I want to win both the Champions League and the World Cup. You can’t put one in front of the other.

“I want to win both the Champions League and the World Cup.”

CB: Who is the best player you’ve played against or with?

CB: Last one, what would we find on your iPod?

JH: You would find a very varied array of music on my iPod, right from Rolling Stones to Jay-Z, to anything. I don’t really like anything specific, I like everything.