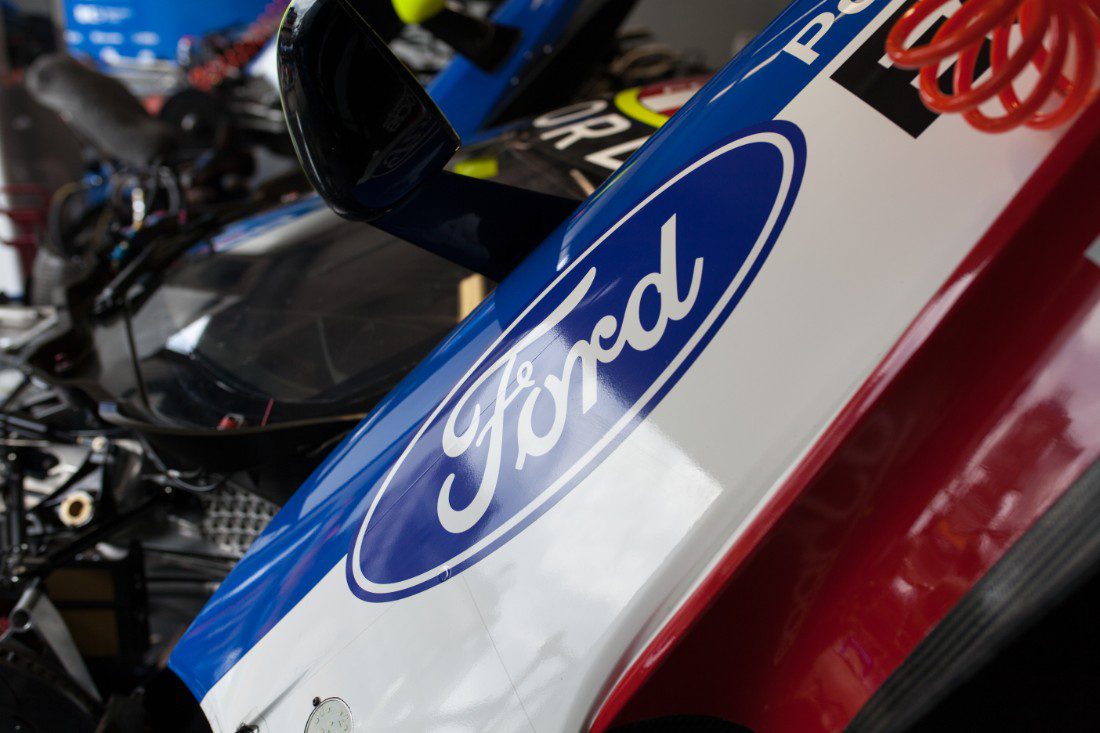 This story starts in 1966 when 50 years ago to the day Ford finished 1-2-3 at the 24 Hours of Le Mans in France, the world’s toughest endurance car race. Racing the now iconic Ford GT40, Ford were the overall winner which coupled with Henry Ford II’s desire to beat Enzo Ferrari after the Ferrari founder backed out of a Ford buyout, would spark a fierce rivalry with the Italian car marque, romanticising a challenge which represents the ultimate test for man and racing-machine in the heart of Northern France.

Fast-forward to 2016 and the Dearborn, Michigan based Ford Motor Company are back with a vengeance at Le Mans. The story here harks back to the 2015 unveiling of the all-new Ford GT supercar which is propelled by a 3.5L twin-turbocharged EcoBoost V6 600hp engine capable of 0-60mph in 3.2s and a top speed of 200mph. This is essentially the third incarnation of the Ford GT, with the Ford GT40 Racer which won Le Mans in 1966, the 2005-06 Ford GT and the aforementioned redesigned Ford GT planned for production in 2016 as a 2017 model. Winning Le Mans would represent a return to the front line of racing and revisiting a reputation for performance engineering across Ford road cars, not just the GT.

Ape to Gentleman were invited out to Le Mans as guests of Ford to witness the history-making in progress, the only problem- this wasn’t a done deal by any stretch, how would the Ford Le Mans story end? Racing in the GTE Pro class which is below the two prototype classes, four Ford GT’s were tasked with enduring 24 hours of track racing and outlasting challenges from Corvette, Porsche and of course- from Ferrari, who were running an all-new 488 car.

We drove down to Le Mans from Ape HQ, Derbyshire in a new Ford Mustang- the motorway awash with Le Mans-goers upwardly pointing thumbs and mobile phone cameras a-clicking, as the iconic beast ate up tarmac en-route to the Channel Tunnel. Three hours of driving the other-side of the Channel we arrived at our accommodation- a delightful French chateau just ten minutes from the Circuit de la Sarthe, a circuit where 85% of the time is spent at full throttle, meaning immense stress on engine and drivetrain components- a true test. 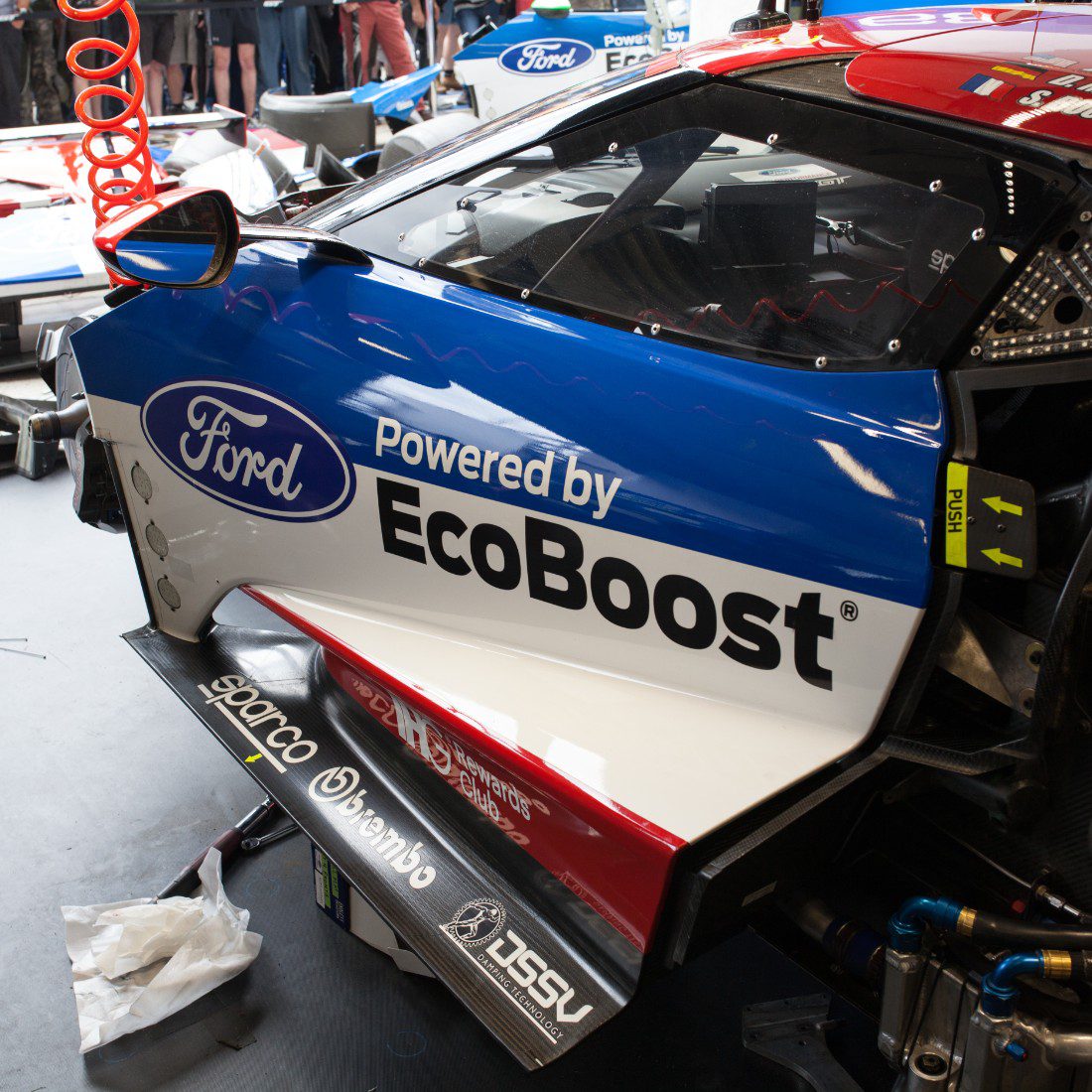 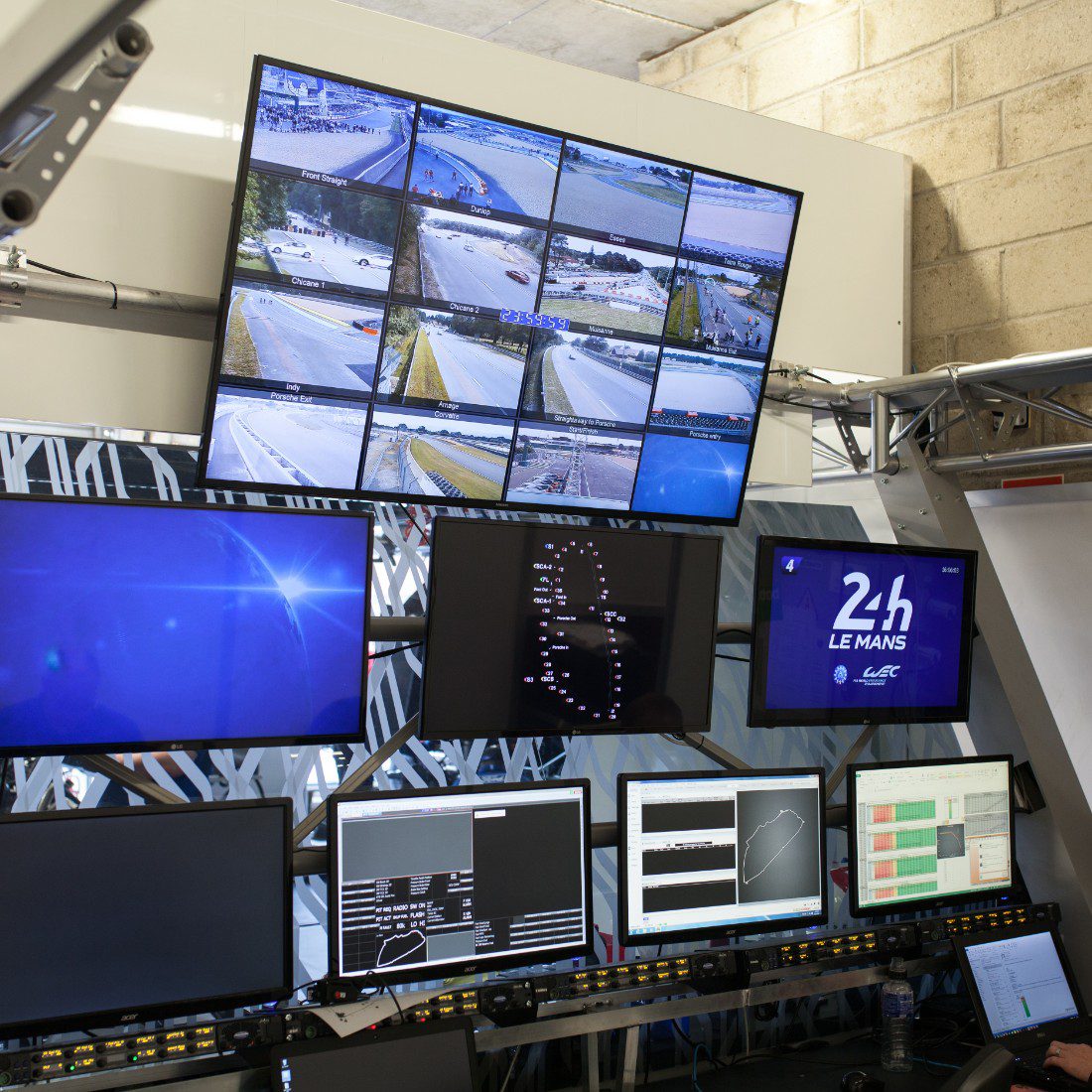 We spent Friday dipping in and out of the Ford Performance Chip Ganassi Racing teams’ inner-workings with access to the team garage where we witness the team completely disassemble the cars post-practice then reassemble them through the night ready for the race to begin on Saturday at 3pm. In all honesty; being in the garage was a little uncomfortable with the engineers clearly focused on the task in hand versus us who were in awe of their skill at assembling a complete car so quickly, and busy taking pictures, also known as getting in their way. 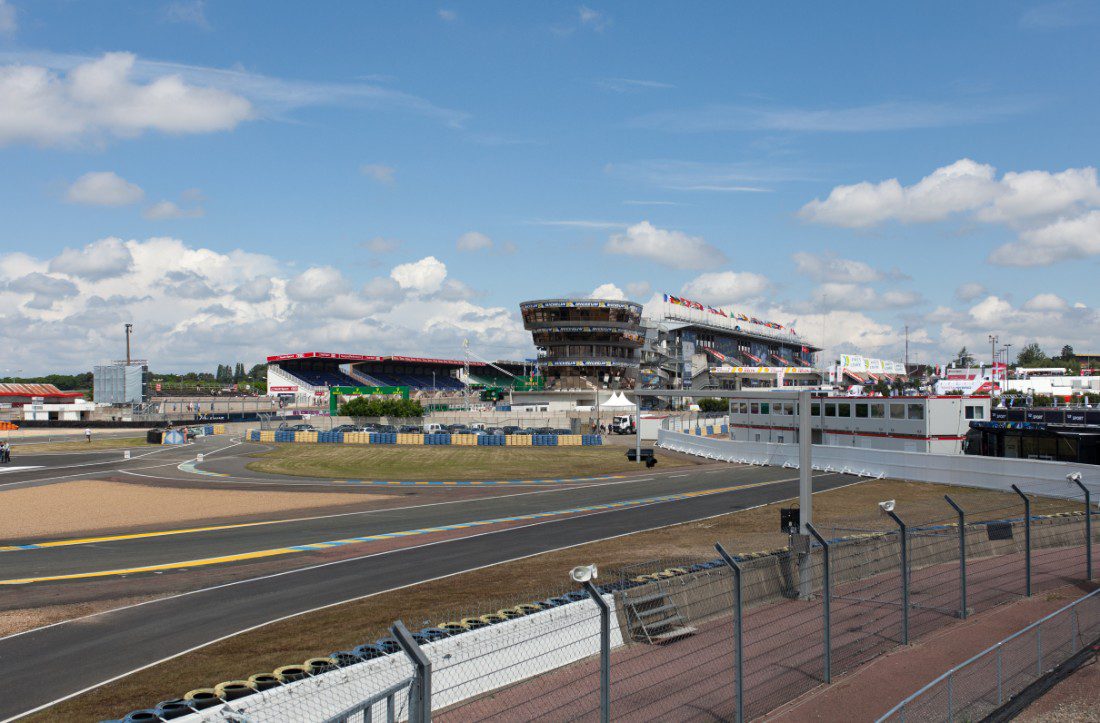 As Saturday arrived the buzz and volume of people around Le Mans gathered pace like a rising tide. Mechanics, cars, spectators, golf buggies and more were busily finding their place at the circuit. We were watching the ‘show’ from the comfort of the Ford VIP centre near the start-finish line which was also right by the pit lane access. As we settled into our seats watching the warm up laps the roar of the cars were interrupted by Ford staff proffering the chance for us to take part in the parade lap in one of their remarkable Ford Focus RS cars, a 2.3L 350hp, 4-wheel drive master-piece. What an honour. 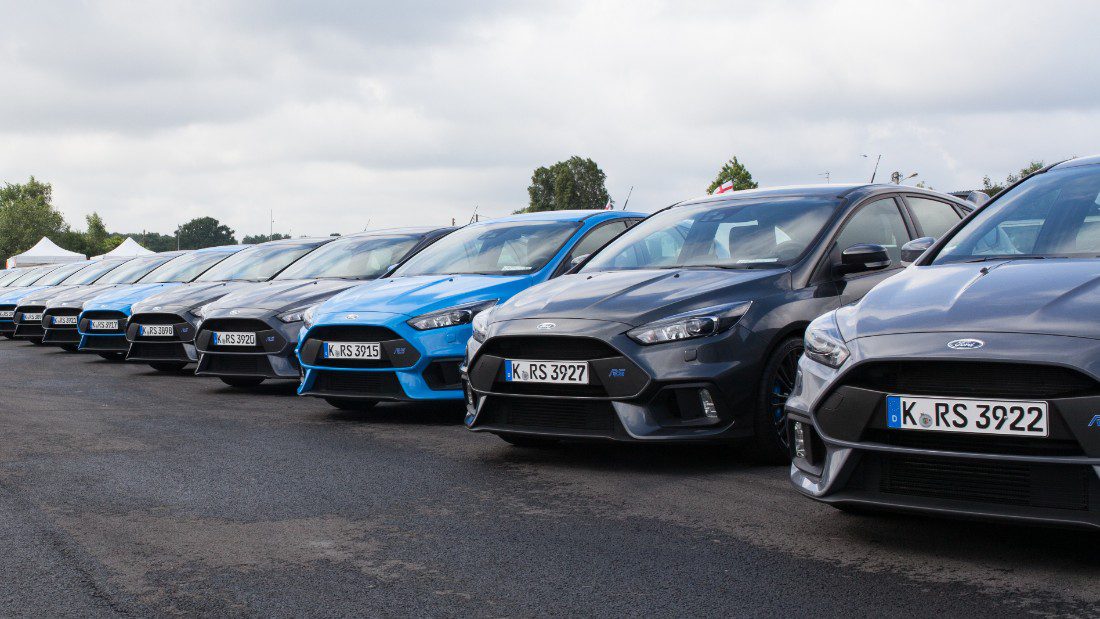 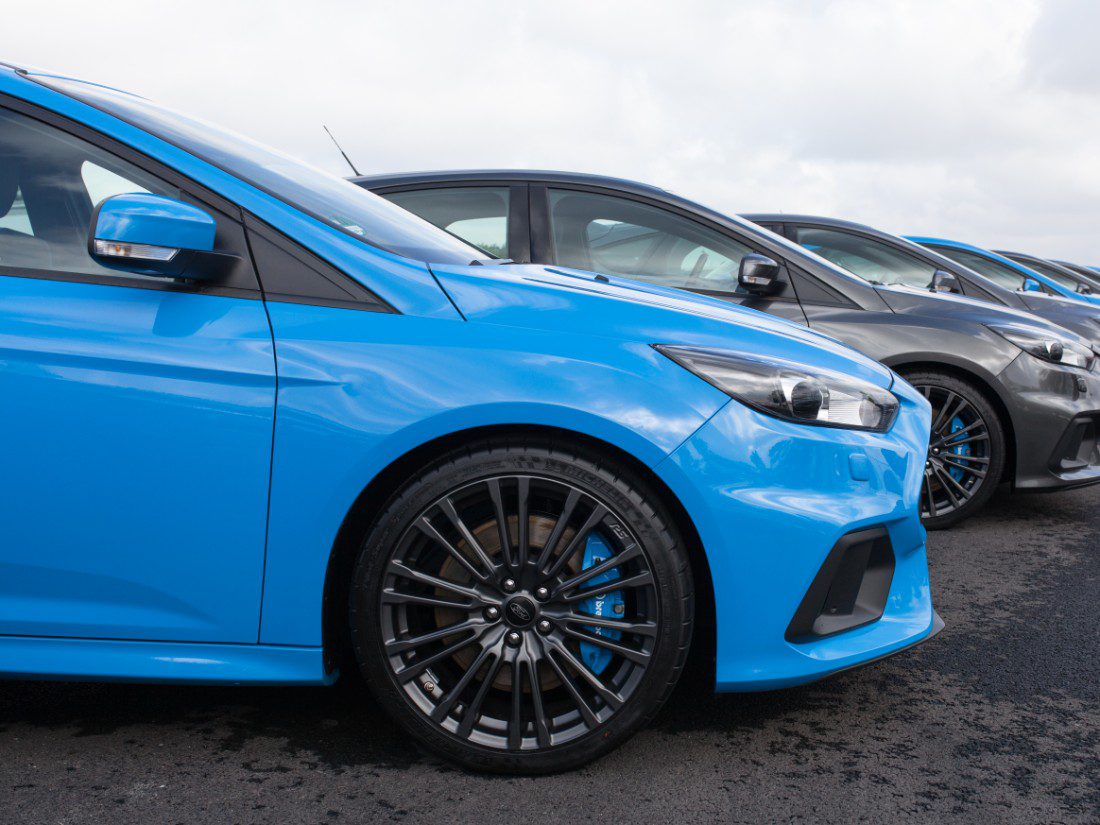 I buddied up with Vince, a delightful gentleman from California who is a 2005-06 GT owner here with his wife to see Ford go about their racing business. As me and Vince tore around the track taking some fairly clean lines and delighting the crowd with some unauthorised engine revving, it certainly heightened our anticipation for the race. 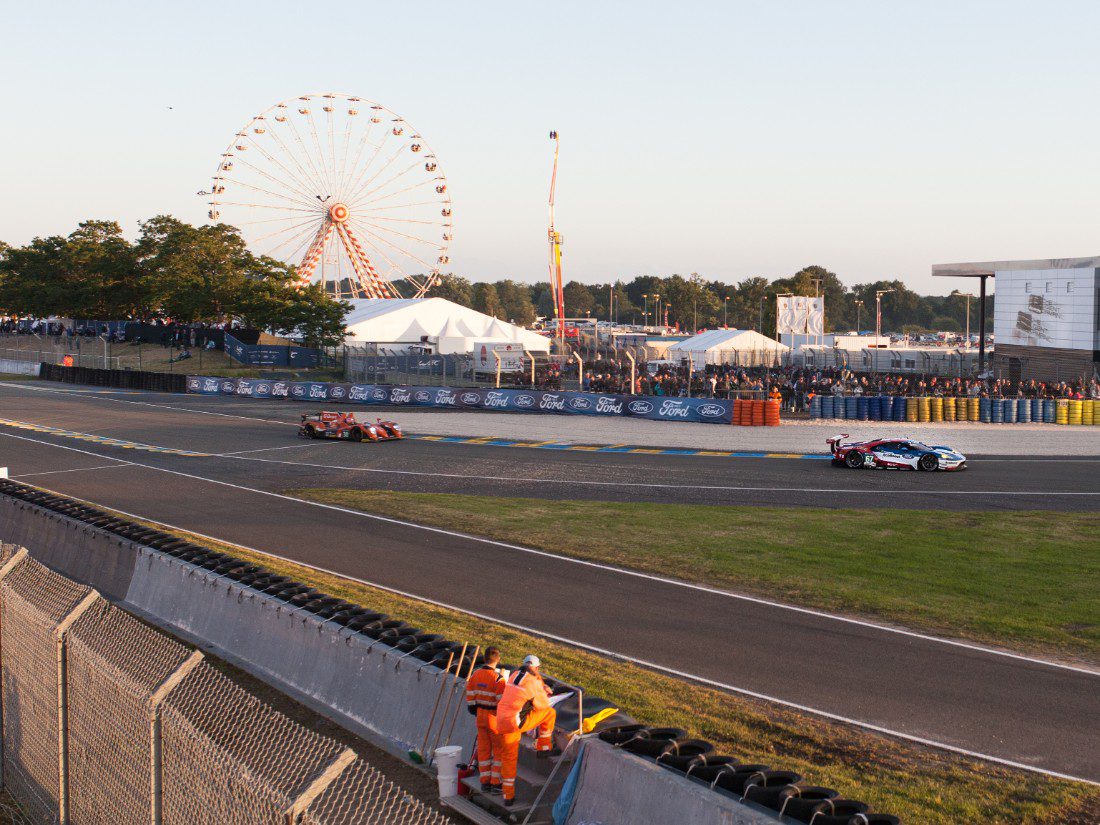 3pm arrived and the race started, the first thing we noticed is the sound- akin to thunder and lightening colliding, with a hint of fighter jet and a gorilla beating his chest. The Ford GTs flew around the track- almost warranting the need for the Ford earplugs supplied at reception, almost I say- who’d want to drown that sound out? As the story played out it was a strange feeling unlike F1 where a race lasts just 2 hours; with 24 hours being a long time to watch cars whizzing around a track but in truth- it was captivating. Never did I tire of seeing, hearing and smelling these beasts speed around the track. We paused for dinner, which was by the track and only momentary, watching on as the drivers battled into the night with track and their machine. 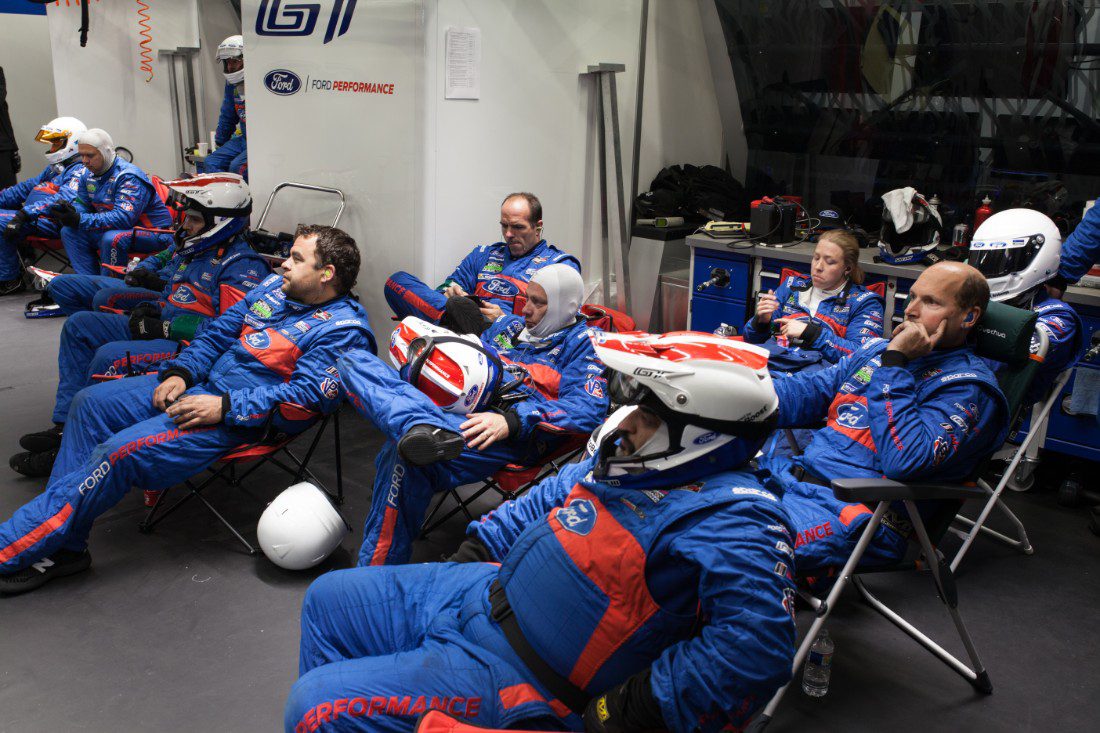 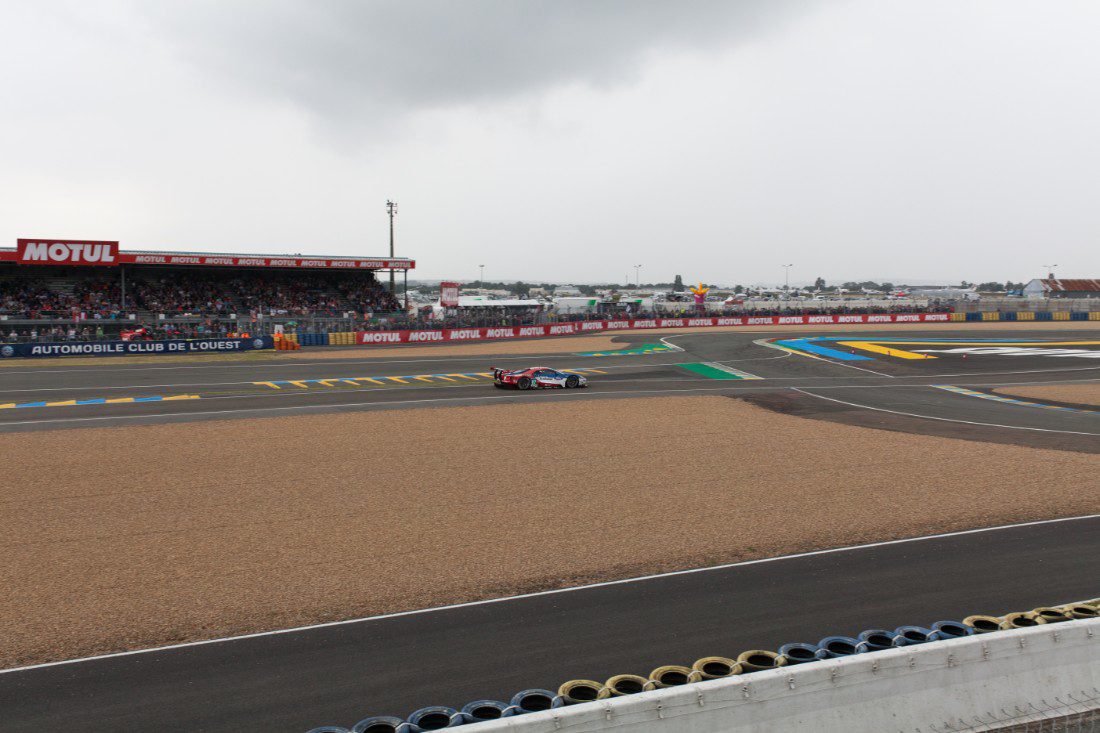 As the sun rose, so did the tension with the 82 Risi Competizione Ferrari 488 hot on the Ford GTs tailpipes. The closer the 24 hour timer came to being up, the more nervy things got- in particular for the Ford family who were watching at Ford VIP with clear emotion, including William Clay “Bill” Ford Jr. the great-grandson of Henry Ford and Executive chairman of the Ford Motor Company. 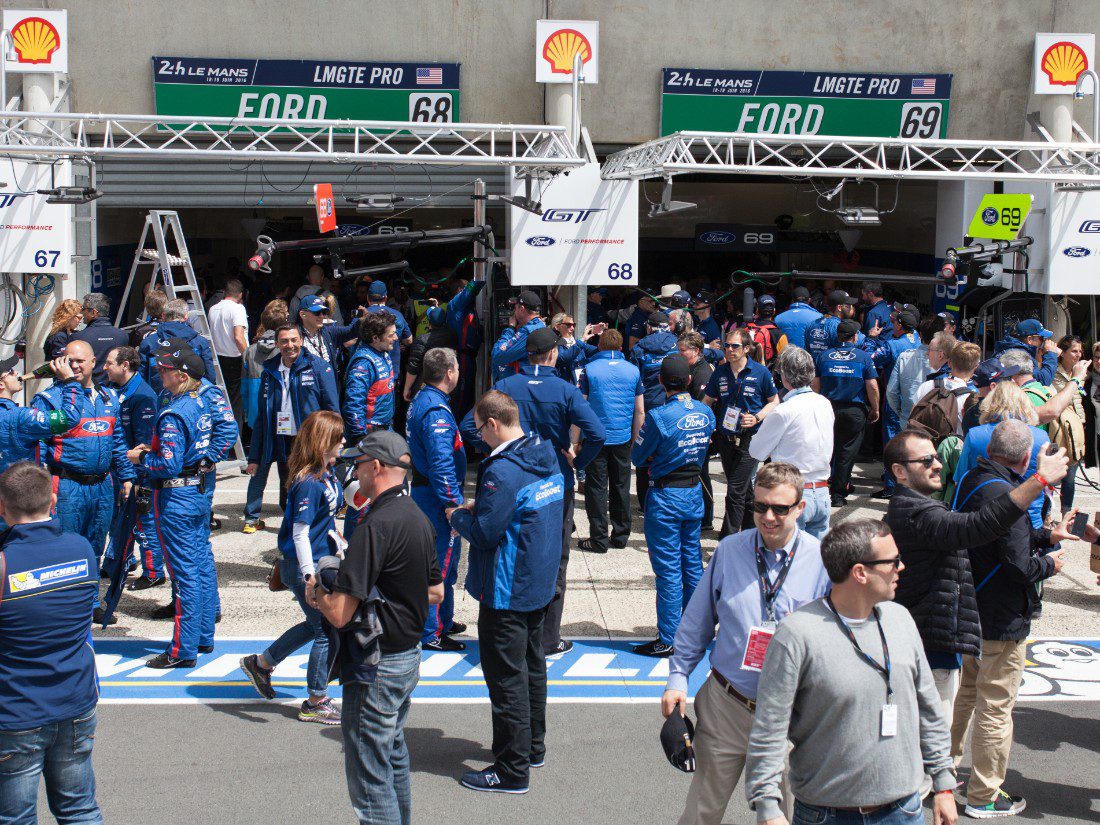 By 3pm and the end of the race all tension was relieved as driver Dirk Müller competed 340 laps in the world’s most famous endurance race to take the victory. He and teammates Joey Hand and Sébastien Bourdais had kept the number 68 Ford GT ahead of Giancarlo Fisichella in his number 82 Risi Competizione Ferrari 488. 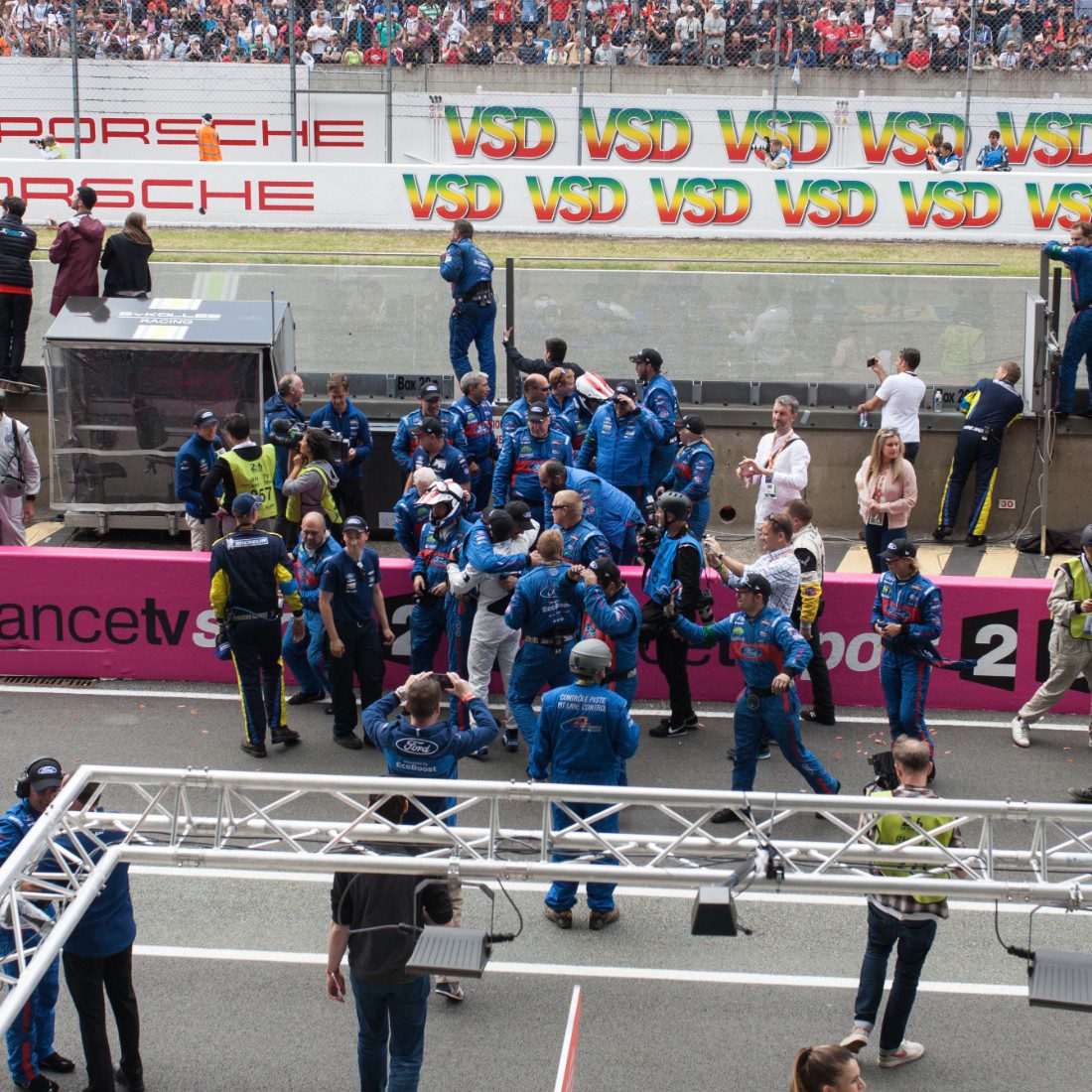 Porsche were the overall winner in the top prototype class, LMP1-H, where 1,000hp cars lap quicker than the GTE Pro entrants, but the latter of which are based on road cars. The victory for Ford completes a campaign that began at the Detroit auto show in January 2015 when the GT supercar was revealed and Ford announced a return to Le Mans after an absence of decades to celebrate the 50th anniversary of the epic 1-2-3 in 1966. 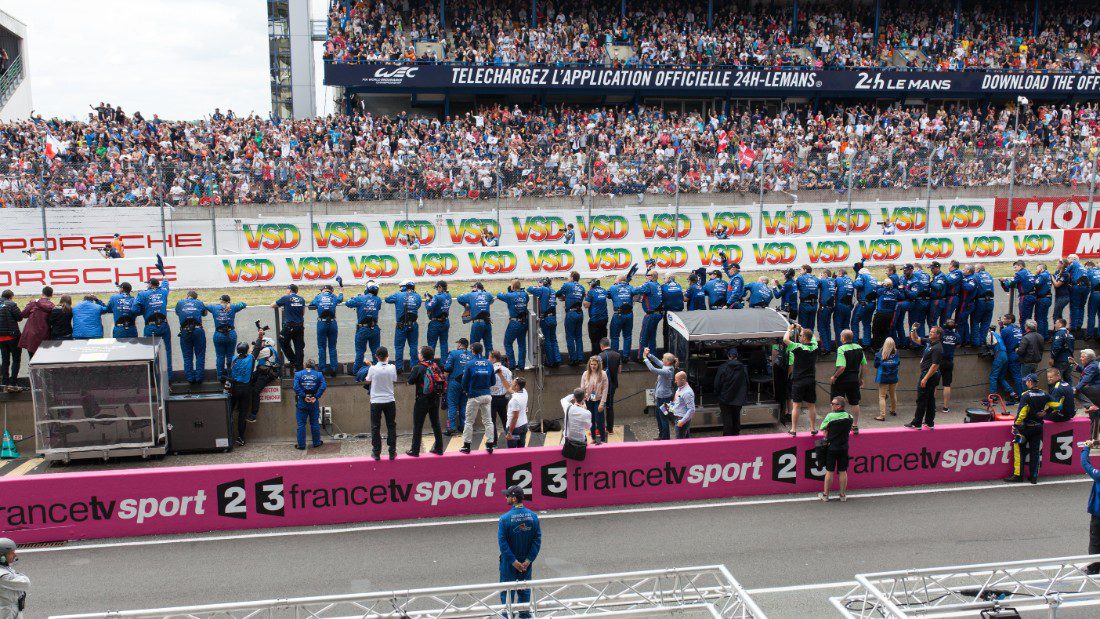 Ford might not have exactly matched the 1-2-3 1966 win, but with the number 68 Ford GT of Sébastien Bourdais (FRA), Joey Hand (US) and Dirk Müller (GER) crossing the finish line as the overall GT winner, and cars 69 of Ryan Briscoe (AUS), Scott Dixon (NZ) and Richard Westbrook (GB) joining the winners on the podium after finishing third place, and the 66 and 67 Ford GTs finished in fourth and ninth places, respectively, Ford won! And in style, with the best car, the best drivers and the best team in Chip Ganassi Racing. 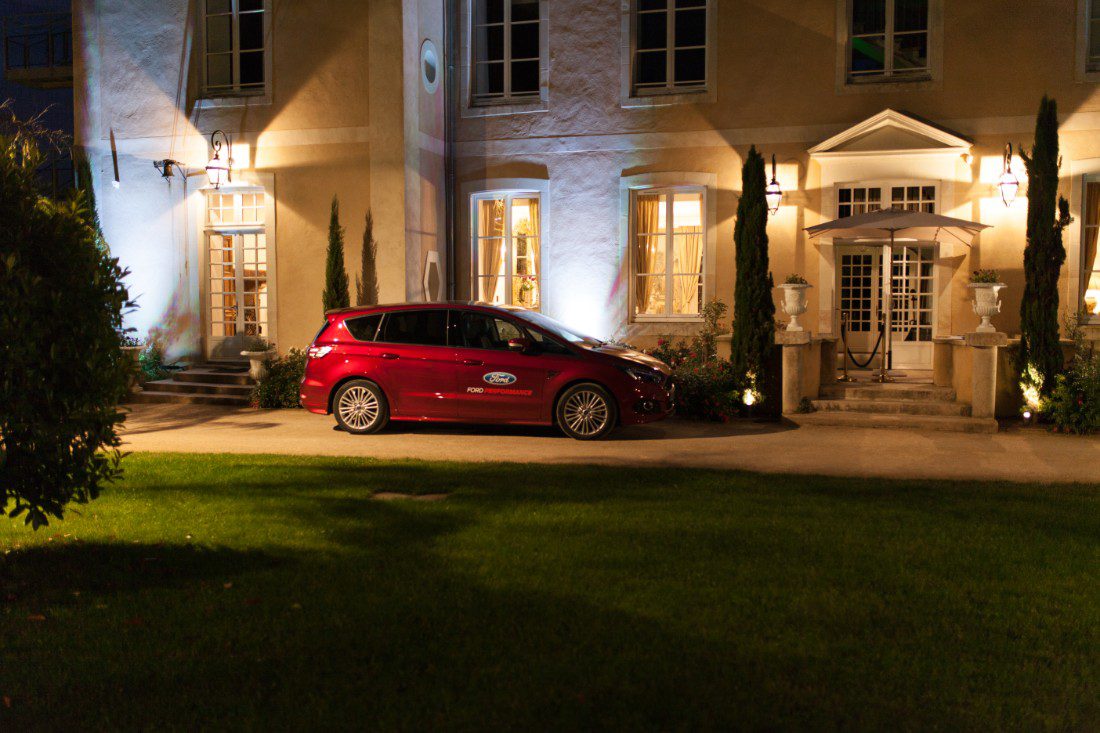 After a night of dinner and celebrations at another superbly handsome French chateau we were given a Ford Focus RS to make our way home in. 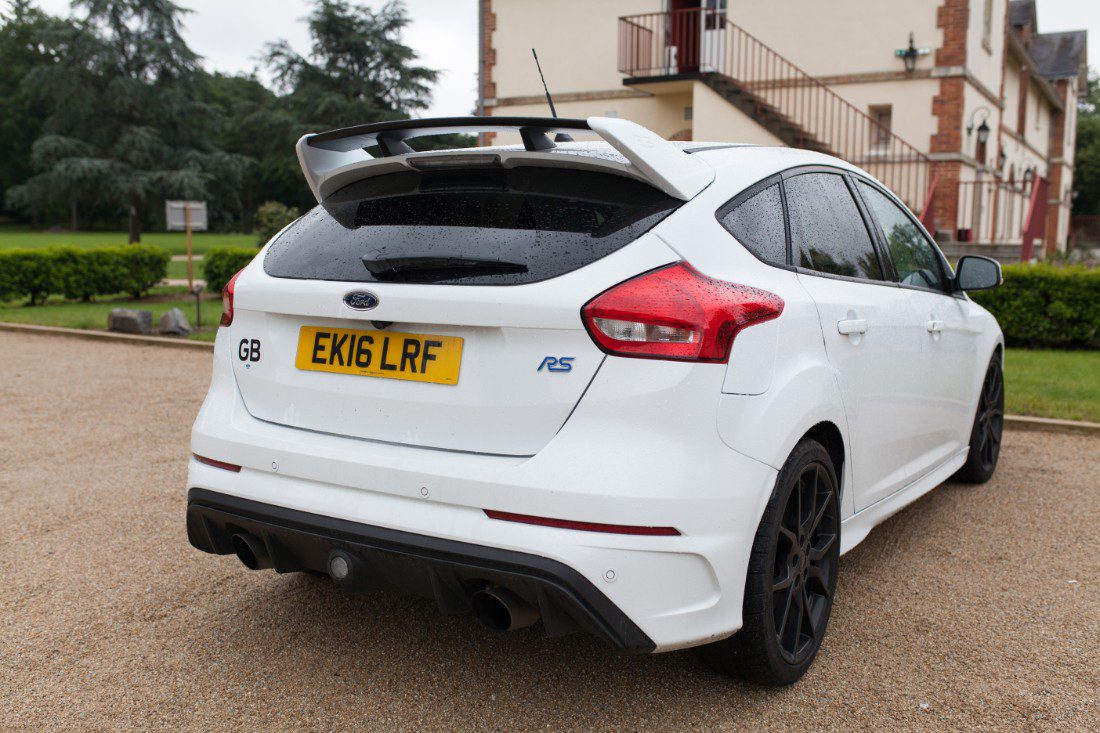 With the 2.3L 350hp engine propelling the 4-wheel drive RS from 0-60mph in 4.7s and to a top speed of 165mph we couldn’t help but feel like Le Mans endurance racers as we cruised back to Calais. 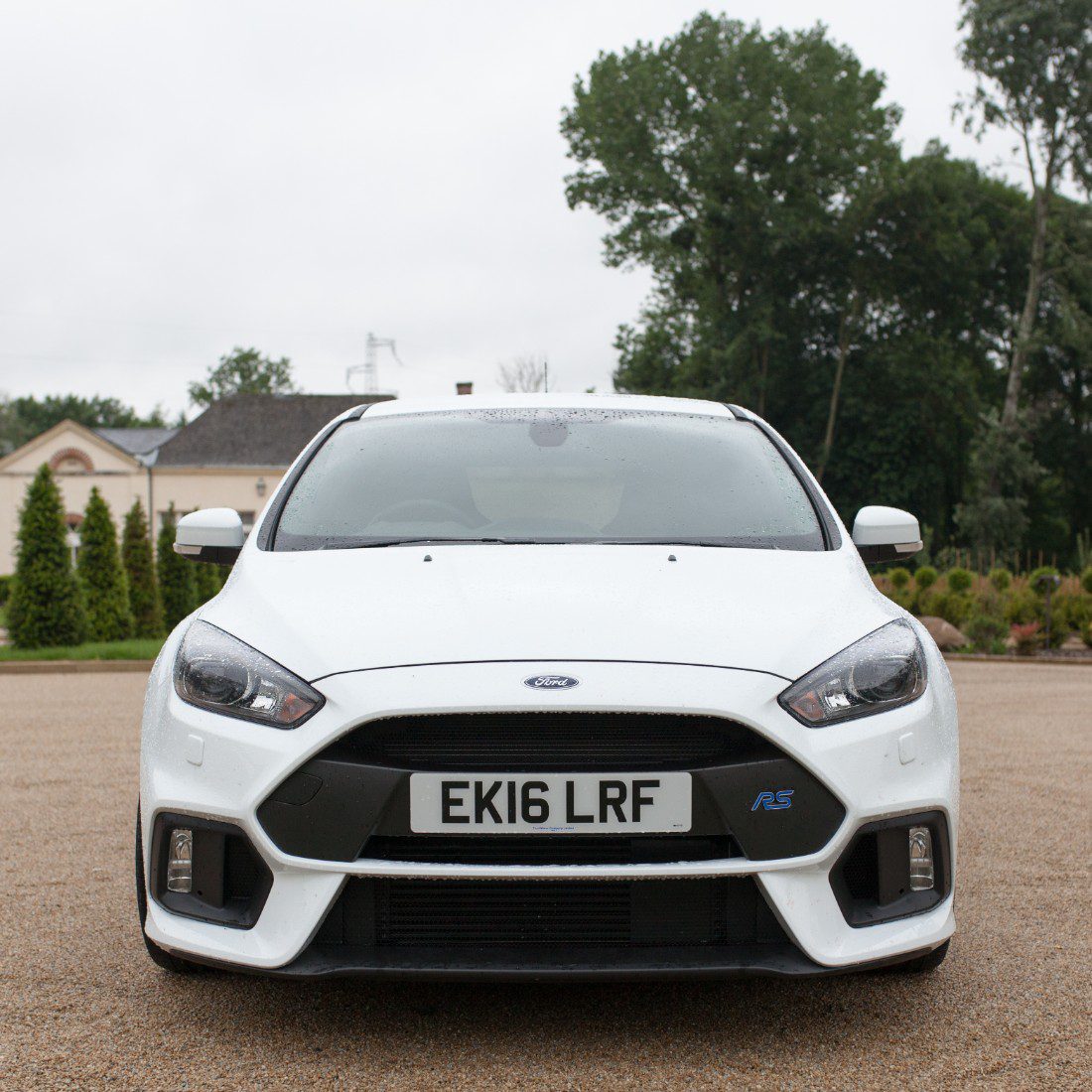 The weekend in Le Mans was obviously epic- great hospitality, experiences, a win for ‘our’ team but it also served as a reminder that Ford have passion- stemming from the very top with the Ford family, who care deeply about their company from staff to product to customer and everything in between. Winning Le Mans (again) sets a new standard for performance GT racing, and we expect it to filter down through Ford’s veins and into their everyday road cars. If the Focus RS is anything to go by, the future is bright for Ford.