Hamilton is a chameleonic brand, moving easily from military-inspired beaters to futuristic Venturas, elegant dress styles and bold digital designs. It is a star of the silver screen, having been in 500 films, starting with Shanghai Express (1932) starring Marlene Dietrich to, most recently, Christopher Nolan’s time-bending epic Tenet (2020).

Now firmly a Swiss native, it was originally one of the stalwarts of the US watch scene, first set up in 1892 in Lancaster, Pennsylvania – one of the oldest inland cities in America and the home of the Amish. As with many companies, it was war that formed Hamilton’s identity as a wristwatch brand when it became official supplier to the US Armed Forces in WWI. From then, Hamilton inserted itself in US culture. It presented engraved versions of its Piping Rock model to the New York Yankees when they won the World Series in 1928; its Ventura was worn by Elvis Presley in Blue Hawaii (1961), and it announced the invention of the world’s first digital wristwatch on The Tonight Show in 1970, hosted by Johnny Carlson.

Hamilton may have swapped its American passport for a Swiss one when it was sold to SSIH (known as Swatch Group today), but it still retains that American swagger. Just now with a Helvetian heartbeat.

The same combination of horological prowess and US personality lies at the heart of Ashford, the pioneering luxury timepiece online retail space based in NYC’s trendy Tribeca. First launched in 1997, at a time when luxury watches just weren’t sold on the web, it has developed a reputation for sourcing the best brands at the most competitive prices.

This expert knowledge of the watch industry is why Ape to Gentleman has asked the team at Ashford for their picks of the five Hamiltons that should be at the top of your wishlist. We defy you not to be tempted. 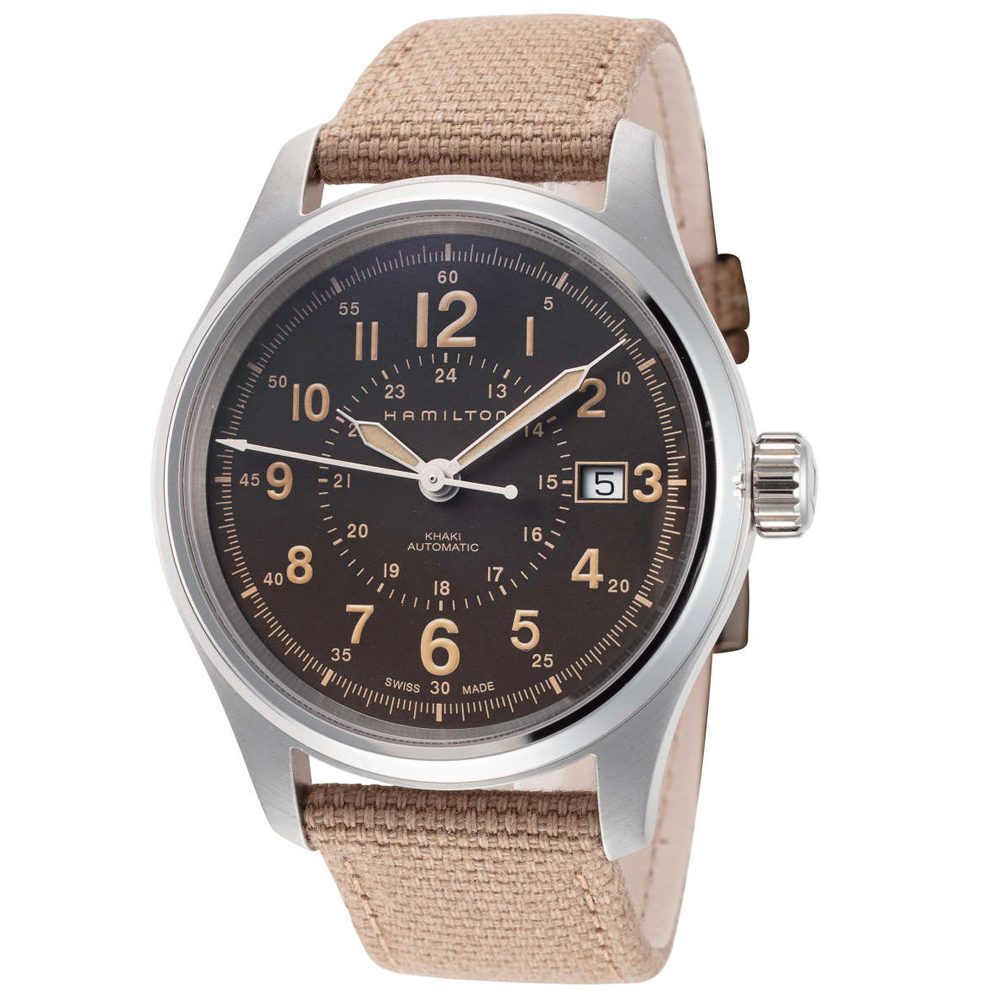 Aside from the quirky case shape of the Ventura, this is one of Hamilton’s most recognised, and imitated, timepieces. Field watches were designed for the military and this version was specifically for the Army.

Everything about it is dedicated to functionality. The 24-hour and minute rings are legible at a glance, and the lume in the hands means it can be easily read at night. It is powered by the H-10, which is based on the iconic ETA 2824, and has an impressive 80-hour power reserve.

It may no longer be on a NATO strap, but this is a practical, good-looking design that is a trusty companion even if you’re not spending time in a trench. 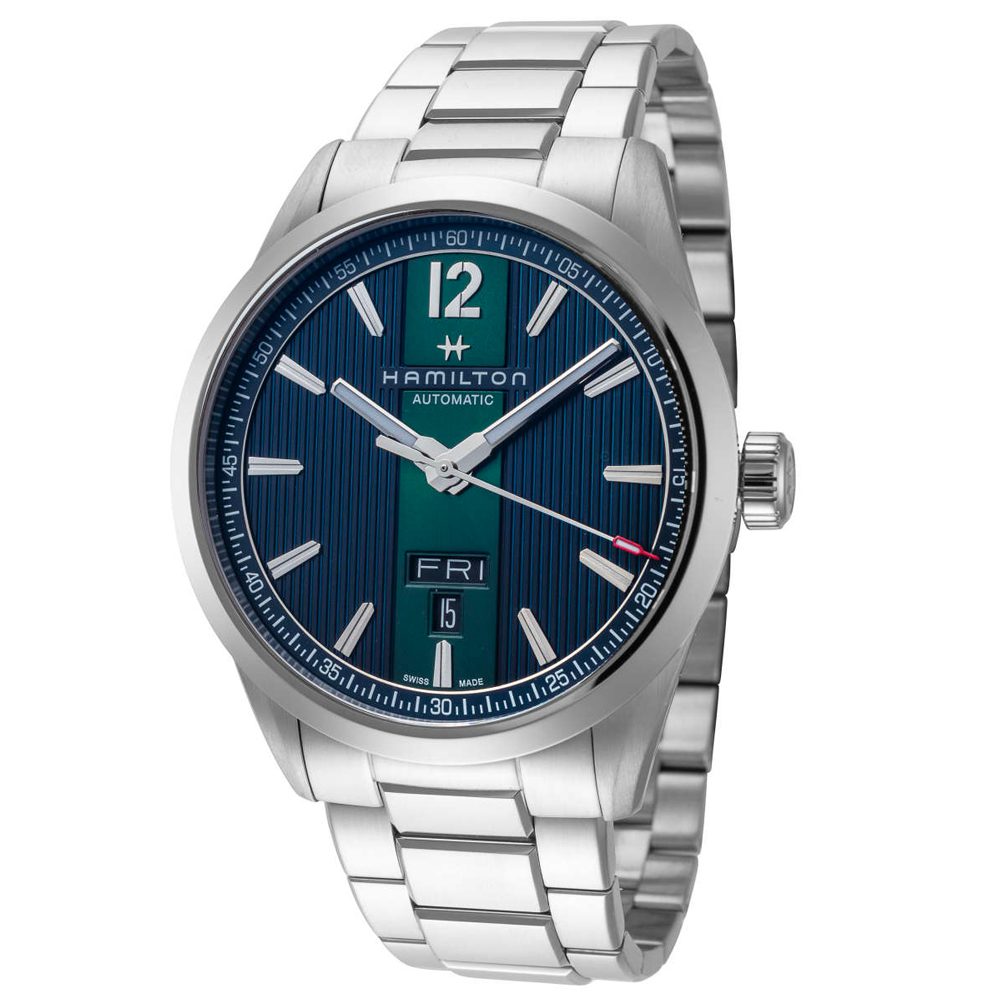 Inspired by the New York city skyline and the street of its famous theatre district, the Hamilton Broadway definitely gets a round of applause. Despite the name, this is actually based on a pocket-watch design from the 1890s, which Hamilton has updated for the 21st century.

The collection comprises three styles: a quartz day-date, a chronograph and this mechanical day-date. It is not for those who like their dials minimal. The contrasting blue and green grab the attention, while the oversized indices and substantial day and date windows make a bold statement. The steel bracelet brings a sporty vibe to the piece, which is powered by the H-30 visible through the sapphire caseback.

At 42mm, it’s not a dainty watch and probably more suited to your weekend wardrobe. That said, it’s a great-looking timepiece that proves there’s more than one Hamilton Broadway success story. When Hamilton’s field watches were under military mandate, they had to conform to government-issued specifications. Under the conditions of the MIL-W-46374A specification, the timepieces needed to be accurate and disposable, in either a plastic or metal case, and with a tritium-painted 12 on the dial. Over the years it modified to cover changes in dial font, and lume application before eventually becoming defunct in the 1980s.

When Hamilton ceased to be under mandate, it decided to have fun, which is why you now have this desirable design. The blue is very mid-century, lending an air of urbane cool to the military design. The white numerals and markings really pop, and the grey canvas strap completes the look.

This is a Khaki Field that has ditched the uniform and is living it up instead. As well as supplying the Army with watches, Hamilton also supplied the Navy and, as this watch illustrates, the Airforce too. It goes without saying that this is not what would have adorned the wrists of WWI pilots – this is a very modern timepiece. It’s quartz for starters and has a worldtimer, which wasn’t placed in a wristwatch until 1931.

However, it was created in collaboration with a French pilot and flying instructor, Nicolas Ivanoff, who races in the Red Bull Air Race Series under the number 7, which explains why it has extra functions, such as showing Coordinated Universal Time (UTC), used daily by private and professional aviators. Other things to play with include a chronograph, 24 time zones and day/night indication.

Its 45mm is sizeable, but if you want this many complications it’s a detail you’ll just have to live with. Despite the trend for vintage designs to have smaller case sizes, this 42mm version of Hamilton’s iconic Khaki Field doesn’t wear too large on the wrist. Also known as trench watches, because they were issued to the Army, they were designed be to dust- and waterproof, in order to endure military life; qualities that make this design ideal for everyday wear.

Just because this is a functional watch, it doesn’t mean that the aesthetics haven’t been considered. The numerals are inspired by the original timepieces, which taps perfectly into the current movement for retro reissues, and that vibe is emphasised by the warm brown of the dial and the cream numerals.

Water resistant to 100m and with a power reserve of 80 hours, this is a military timepiece that’s just as at home on Civvy Street.

A paid partnership with Ashford – words and opinion Ape’s own.