Summer is not a good time for the man who has to wear a suit, or even for the man who wants to. Suits drape best in a heavyweight fabric and that’s not a friendly fact when the temperature climbs.

A jacket is an additional layer that one might feel best without. Of course, it’s precisely for this reason that one might well choose to wear a suit: because more and more men will be seeking to abandon theirs. And to wear one well: because more and more men will be looking terrible in theirs. The summer suit is a real opportunity to stand out from the sweaty, grey flannelled flock.

This doesn’t mean even you will look as pristine as you might when wearing the fully-canvased, bulletproof style that sees you through the autumn/winter months. Suits that are unlined or made of cotton or cotton blends will crease quickly. But at least you’ll be elegantly crumpled. Chances are that you’ll probably be elegantly crumpled in just the one suit – realistically only the most dapper of men have an actual choice of summer suits to see them through all possible occasions that might arise over the few weeks when it’s actually hot enough to warrant such attire.

So if you’re settling on one, aim for something that’s multipurpose. Counter to all advice above, aim for a half-lined, lightly canvassed navy suit in a lightweight wool – yes, you’ll be a tad warmer than you really need to be, but wool breaths well, wicks moisture (especially if unimpeded by a full lining), holds its shape better and lasts longer. It’s the practical if not the coolest option, literally or figuratively. A summer suit at workplace with dress rules is no easy thing to pull off. If you work in the kind of role that is, as they say, client-facing, then you may have to bite the bullet and sweat away in your more standard tailoring. That’s all the more case in traditional industries the likes of finance and the law. But if you have the leeway, opt for an unlined two-piece suit in a plain dark navy linen blend, with two button fastening and notch lapel. Make sure that internal seams of the jacket are nicely trimmed – in case you need to take your jacket off.

Pleated trousers are both more summery and give extra room for your nethers to breath. Team the suit with a long-sleeved shirt in an understated self stripe with French cuffs and cuff-links/knots (thus retaining a touch of formality) and a plain knitted tie, which both looks less restrictive and, indeed, breaths more around your already clammy neck.

For A Special Occasion 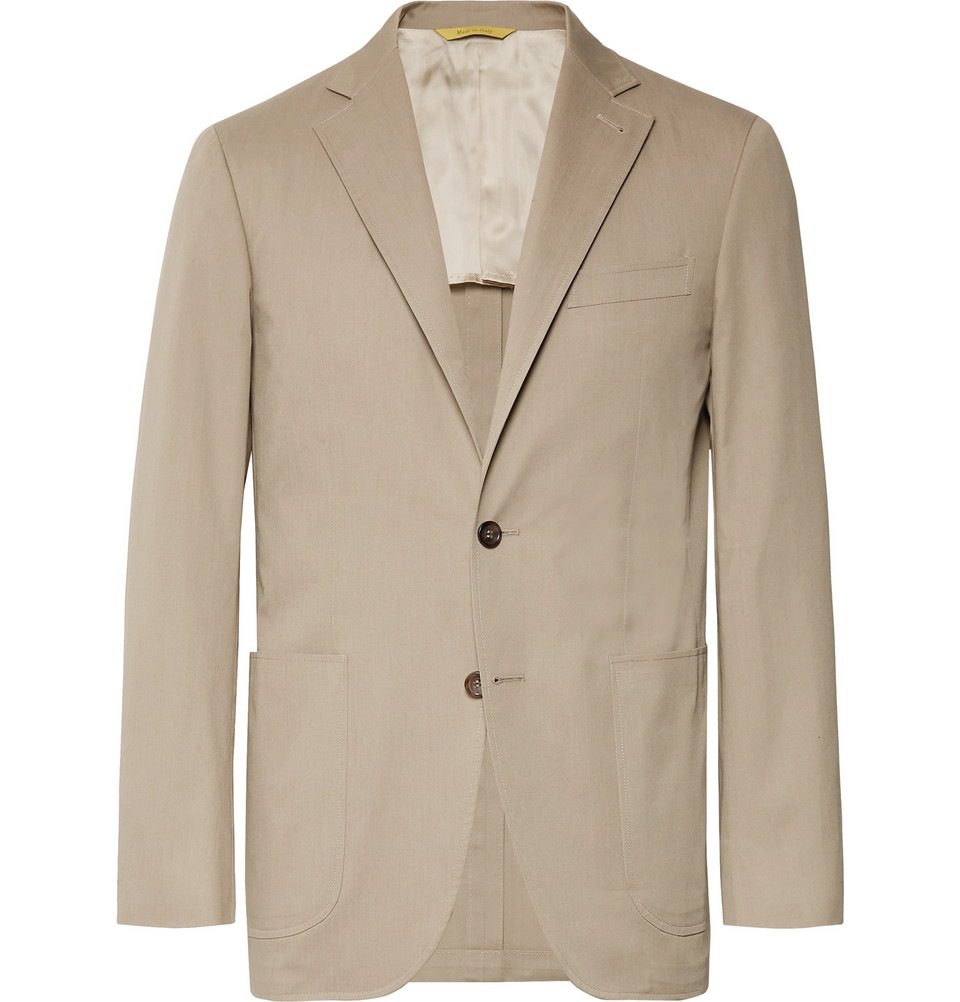 Special occasions tend to afford a little more pizzazz in dress, so worry less about looking sufficiently formal – the mere fact that you’re wearing a suit speaks enough of that. Opt for a cotton blend two-button, notch lapel jacket – with matching trousers of course – in a shade of light tan, dark beige or mid blue, with perhaps a subtle windowpane check. Lighter coloured suits are better in the imagination than in practice – unless you’re wearing off-white (see below).

A second option is to bring interest through the weave of the fabric itself – seersucker is a quintessential summertime cloth, comprising alternate slightly crumpled and subtly shiny stripes of the same colour. That crumpled effect gives the fabric a 3D quality that encourages it to stand away from the body, thus keeping you cool. It also means that your seersucker jacket looks best when lined to help retain a fitted structure. You win some, you lose some.

For A Weekend Away Wear it over a loudly patterned camp collared short-sleeved shirt, so you still look summery if you need to remove your jacket. Dress etiquette dictates that a gentleman never removes his jacket in company, no matter how stifling it gets. But sometimes heat exhaustion demands drastic action.

Note too that, while a jacket should always be worn with a tie – to avoid looking like a politician seeking to be a “man of the people” – a camp collar evades this stricture by being unwearable with one. It’s the archetypal summer style too. It’s not easy to pull off but the off-white suit is the classiest of high-summer suiting options. Don’t think Tony Manero. Don’t think Colonel Sanders. But do think Kentucky as being the right geography for inspiration: the archetypal US southern gentleman wore off-white tailoring because his position demanded tailoring, but the heat demanded something other than the traditionally sober and dark. It was a look Mark Twain made his own and, in the mid 20th century, by Brits abroad: think Graham Greene’s “Our Man in Havana”.

Wear yours in a mid-weight linen – a best-of-both-worlds option – as a three-piece, and dress up or down accordingly. It’s the ideal summer suit for a touch of artful shabbiness. Wear with a white linen button-down shirt undone at the neck and a loud tie.