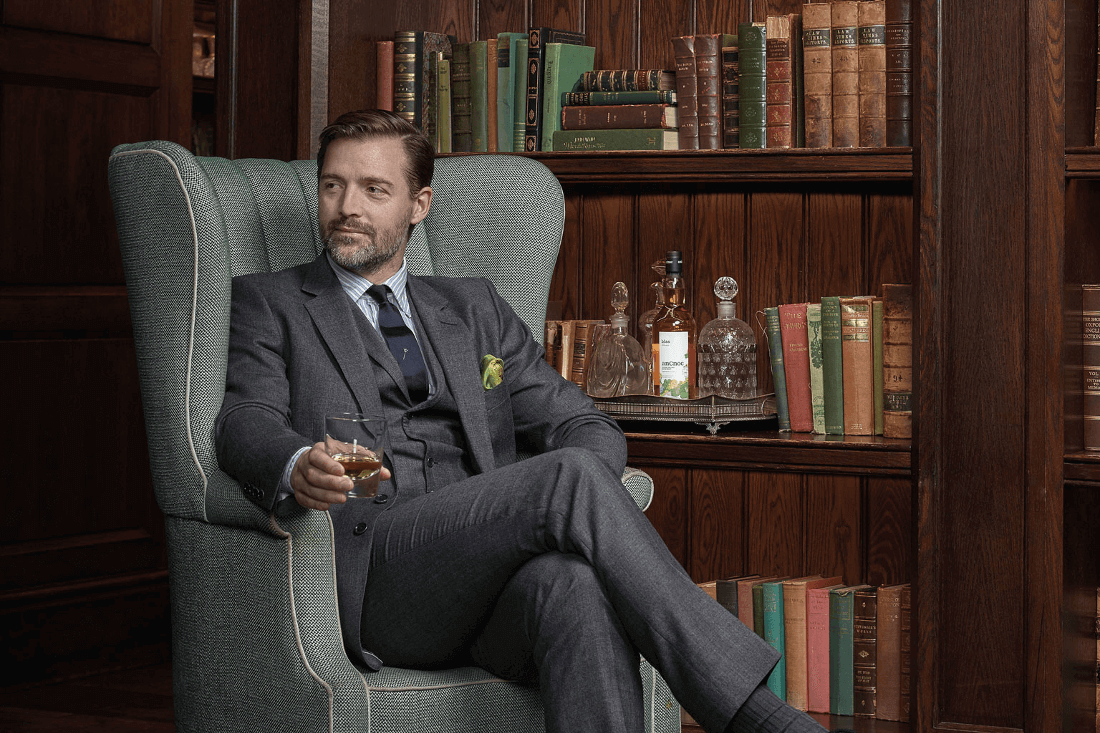 Ape to Gentleman had the pleasure of meeting with Mr Patrick Grant; Savile Row tailor and Creative Director of his labels; Norton & Sons and E. Tautz. While also being one of the most stylish men in the world, he’s incredible charming and knowledgable.

Patrick is soon to be part of the judging panel for Amway’s up-and-coming competition; Britain’s Top Real Role Model, which searches for Britain’s most inspiring entrepreneur. We spoke about being a young designer in todays climate, as well as what Patrick uses to maintain his beard and how galoshes are the way forward.

What is your role with Britain’s Top Real Role Model?

My role in this is quite simple – I’ve been asked to be one of the judges on the panel. The competition has been running for a few years already. They ask a couple of entrepreneurs to dive in and help the judging, and promote the idea of entrepreneurship in general. I think we’ve had a good track record in Britain of producing new businesses and everyone kind of forgets fashion has a strong entrepreneur spirit. It’s not like you’ve invented a new widget that does something amazing or written a new piece of software that changes the world. Fashion seems to get bypassed by those who think about entrepreneurship in ‘normal’ terms. If you look at the schedule at London Collections: Men about 90% of brands were British.

Nobody seems to question just going out and starting your own business straight from university with no money and no plan. Just going for it. I think that’s amazing. People don’t stop to reflect on that very often. Some fashion graduates, with no experience or work, let alone experience running a business go out and start their own – this is what helps makes the fashion business become successful.

Most get there by determination, a bit of common sense, often a bit of good fortune and talent.

But everyone forgets that when they see a show on a catwalk, that behind the scenes there’s a business that’s one or two people that are designing, developing, manufacturing, showing, selling, producing, delivering, invoicing. They’re doing it most of the time with absolutely no resource but with lots of enthusiasm.

What advice would you give to aspiring designers starting out their own business?

I think it’s quite easy to maintain a level of enthusiasm and effort that it requires to keep doing it, if you see the business grow and have success, even if it is quite small. The physical determination to keep going is there in quiet a lot of young entrepreneurs. The skills required, you learn through experience very quickly.

If I think back to how it was for me – I started my ready-to-wear business five years ago and it was me on a board at the back of Norton & Sons creating a little collection. We sold a few pieces and took orders. We only had three factories which were quite easy to manage, and we learnt from every experience, all the time. I picked it up as I went along. I then started and managed to get success with E. Tautz.

It’s a real mixture of learning through experience and common sense. I don’t think many designers have written a business plan. If you look at the designers who have been successful in recent years, most of them have someone assisting in other areas. Look at Marc Jacobs who had Robert Duffy, Christopher Kane has his sister Tammy, Jonathan Saunders has Evie – a lot of these businesses has somebody solid taking care of the nuts and bolts of the business while the other is designing and marketing.

Do you think mentoring is useful?

There’s formal mentorship that the BFC and Fashion East offer which is helpful. There’s also informal mentoring happening, when for example the BFC takes groups of designers away to places like Hong Kong or New York – when they’re there, they’re stuck together in the same room to talk. I’d be more than happy to talk and share ideas with other designers.

Would you suggest to entrepreneurs on BTRRM that they find someone to partner with?

It’s much easier to share the emotional burden as well as the work burden. I think it has to be somebody who’s a natural fit. For some of the young British designers, like Agi and Sam, they naturally split the work. Sam does the sketching and Agi does all the hard work. At least if you believe Agi. But it’s nice to have somebody that naturally fits into the business with whom you compliment.

If you start together that’s great, if you start your own business and have to hire someone like that it would probably be quite expensive. So it needs to be very much a partnership sort of thing to work. It’s just about finding your way – so if someone appears on your radar don’t be afraid to bring them in and give them a bit of your business.

East London has become a hub for fashion, what are your thoughts on this?

There’s a real sense of community amongst all the emerging fashion designers in the UK, many of whom have gone to the same three or four colleges and turn up on the same schemes such as NewGen and Fashion East. But at you say, there are lots of them in that area. People are always willing to share their experience and their knowledge. Which is probably one of the reasons why London, both women’s and men’s, appears to be on an upward trajectory because actually none of them have great big businesses with anything to lose. We’re all working together. We understand the rising tide.

If you look at Italy; they’re bitching about each other and trying to stab each other in the back – and that may be just an innately Italian approach to things – but there doesn’t seem to be same unity amongst them. I was on a panel for SHOWstudio with some journalists and they were saying that talk in Milan was that there’s the feeling that London is on an upward track. I think that’s one of the things to have hope for as an entrepreneur in anything. You want to be part of something that’s moving. Being part of a movement is advantageous. Milan was the fashion capital for decades. That’s changing now.

What do you recommend men to consider when getting items for their Autumn/Winter wardrobes?

For me I dress very simply and what I do have in my wardrobe are good things which I keep going back to. You can’t go wrong with hefty overcoats in good heavy wool in a selection of lengths and weights.

But with certain staples, the same rules apply – get a few good things and you wont go wrong. Don’t buy five pairs of poor quality shoes, buy one or two really good ones. In all your clothes selection, get great high quality simple materials that will last and age well.

Hats are always good in the winter too. Not a cloth cap but a felt fedora – but give it a good bash so it doesn’t feel too formal. Sit on it a few times and roll it up and stuff it in your pocket. I think in the winter especially, that crisp pristine look looks a bit inappropriate.

As the weather turns wetter what are your thoughts on galoshes?

I’m a fan of them! I was actually looking for mine this morning. But yes, galoshes are great. a. they project your shoes and b. the pavements are so slippery so they offer some extra grip compared to the leather soles. They’re also really comfortable.

On a parting note, how do you maintain your beard?

I normally grow it out during the winter and it’s great because I cycle everywhere so it keeps me warm. I use a bit of Mr Natty’s beard elixir to condition it, partly because it smells so nice. I tend to keep it different lengths and I have a set of Philips beard trimmers to trim and then tidy up with scissors. My beard was born primarily out of laziness more than anything else and I’ve had it for about 8 years now. It’s great how it’s become perfectly acceptable now to have a beard.

This year’s young contenders will have to impress a judging panel of some of the UK’s most successful entrepreneurs including last year’s BTRRM winner and CEO of Pulp Friction; Jill Carter, fashion designer Patrick Grant, young entrepreneur and Made In Chelsea star Francis Boulle and Amway UK’s Corporate Affairs Manager Sheryl Franklin-Worth.