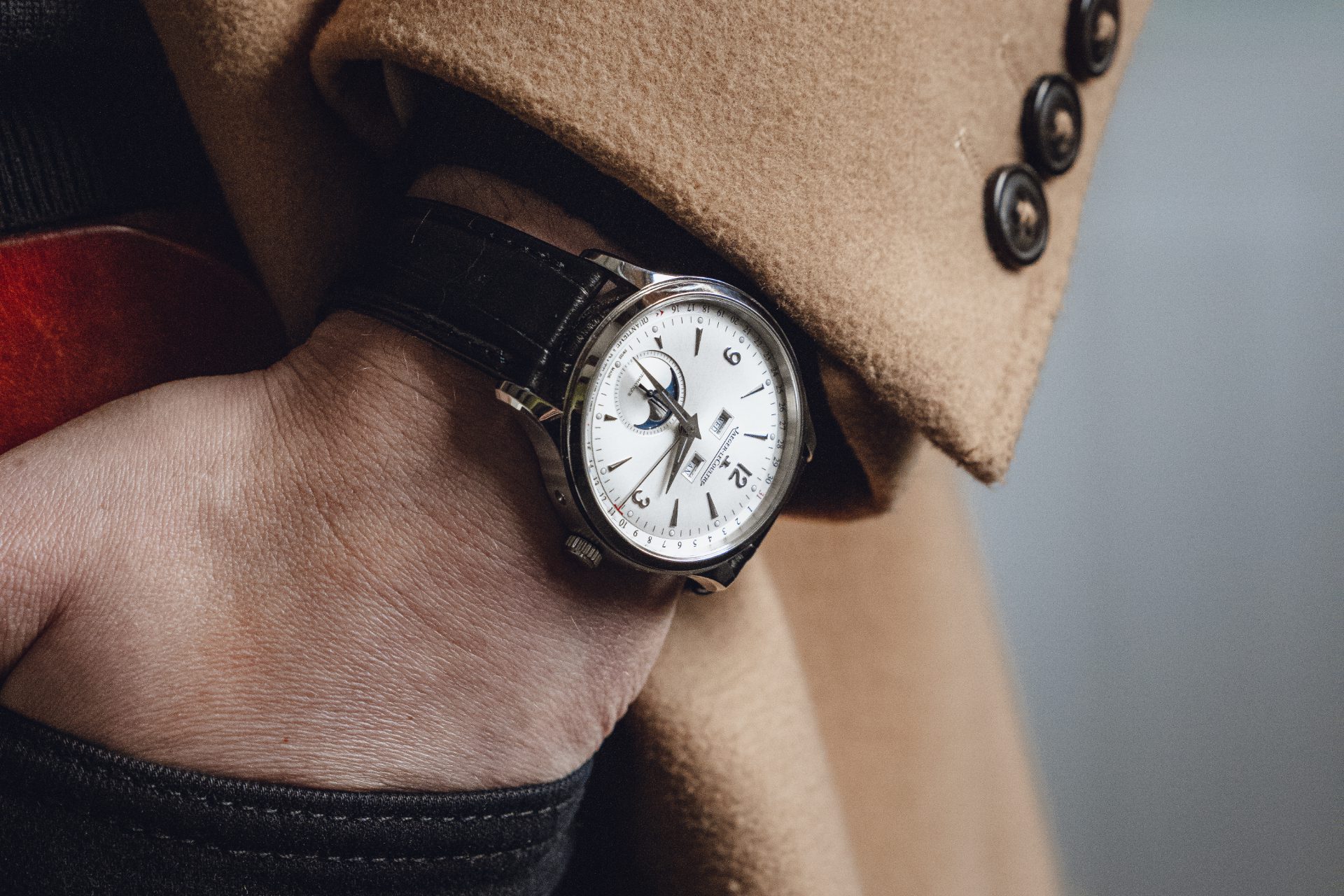 If there’s a brand that knows where the Vallée de Joux’s bodies are buried, it’s Jaeger-LeCoultre. As the oldest watch manufacturer in the region, it’s been there for 189 years, which equates to a lot of change, even in the slow-moving world of watches. It is also one of the few remaining companies to design, make, and assemble nearly 100% of its movement parts as well as its cases and dials. In fact, there is very little this Le Sentier-based manufacture doesn’t do.

Charles-Antoine LeCoultre and his Workshop in Le Sentier, Switzerland

But before there was Jaeger-LeCoultre, there was just LeCoultre – Charles-Antoine, an apprenticed blacksmith whose job involved hardening and heat-treating steel parts for use in pocket watches. His handling of these pieces gave him a unique insight into the challenges watchmakers faced, so he stared designing and building machinery to help produce pars more efficiently.

By 1833, Charles-Antoine had set up his own shop where he garnered plaudits for his Millionmètre machine, which measured to a resolution to 1/1000 of a millimetre. He subsequently started making complete watch movements, inventing a crown-operated winding system that negated the need for a key. The next step was to transform the shop into a watchmaking plant, which Charles-Antoine did with his three sons, Elie, Paul, and Benjamin.

It was the first in the Vallée; steam-engine powered and with electric lights. It became so successful that, by the end of the 19h century, it employed 500 people and was the go-to for complicated movements, such as repeaters and perpetual calendars. 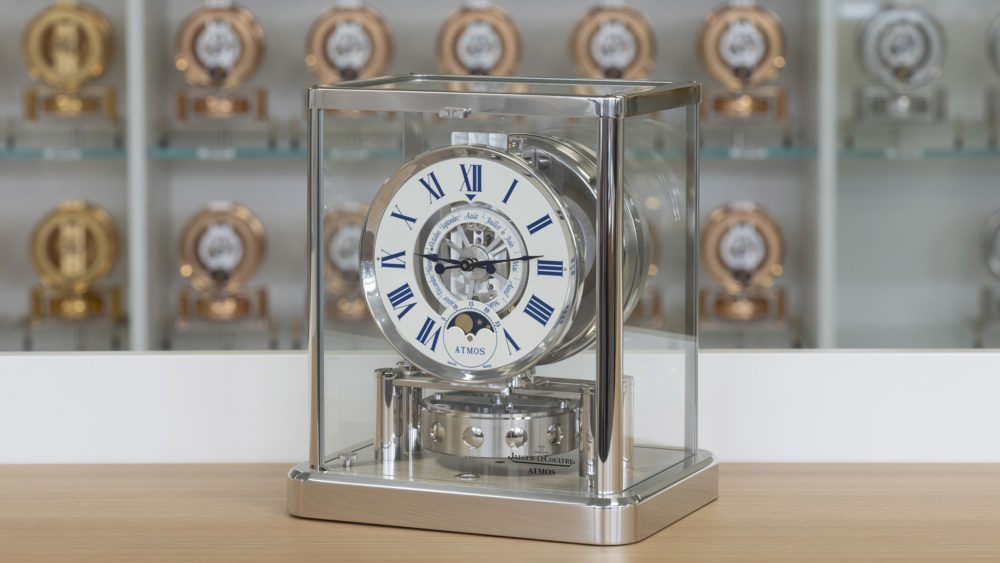 It was war, specifically WWI, that brought LeCoultre into contact with Paris-based instrument maker Edmond Jaeger and, when the wristwatch market boomed after the war, the two were in a position, in 1925, to launch a co-branded watch with a dual-level baguette movement that could be easily replaced in minutes and repaired later.

Jaeger also brought Parisian flair to the Le Sentier marque. His Paris connections meant the designs took on a more artistic bent, while the materials changed as well, with stainless steel for cases and sapphire crystal covering the dials.

The next few years were creatively rich for Jaeger and LeCoultre. 1928 saw the launch of Jaeger’s Atmos clock, which uses temperature variations to generate energy, and in 1929 the duo unveiled the world’s smallest mechanical movement, the hand-wound Calibre 101. A delicate design that would, 24 years later, be seen on the wrist of Elizbeth II at her coronation. But 1930 was the big year – it was the year the Reverso was launched. A present day Jaeger-LeCoultre Reverso, the design has stood the test of time

The Reverso has become like the Submariner, or the Royal Oak – no brand name necessary and an iconic silhouette. It was born on the polo fields of India after a Swiss watch dealer, César de Trey, was asked, by a polo player, to design a watch strong enough to withstand a collision with a polo ball. De Trey approached Jacques-David LeCoultre, Charles-Antoine’s grandson, to make the movement and asked Jaeger for the case.

It was French designer and engineer Rene Alfred Chauvot who came up with the “slip and flip” mechanism and history was made. Despite being an instant success, with watches ready to wear just nine months after patents were awarded, WWII killed off the Reverso.

It was only resurrected again in the 1970s, thanks to the tenacity and insistence of Jaeger-LeCoultre’s Italian distributor Giorgio Corvo who was canny enough to buy the last 200 Reversos on the market. 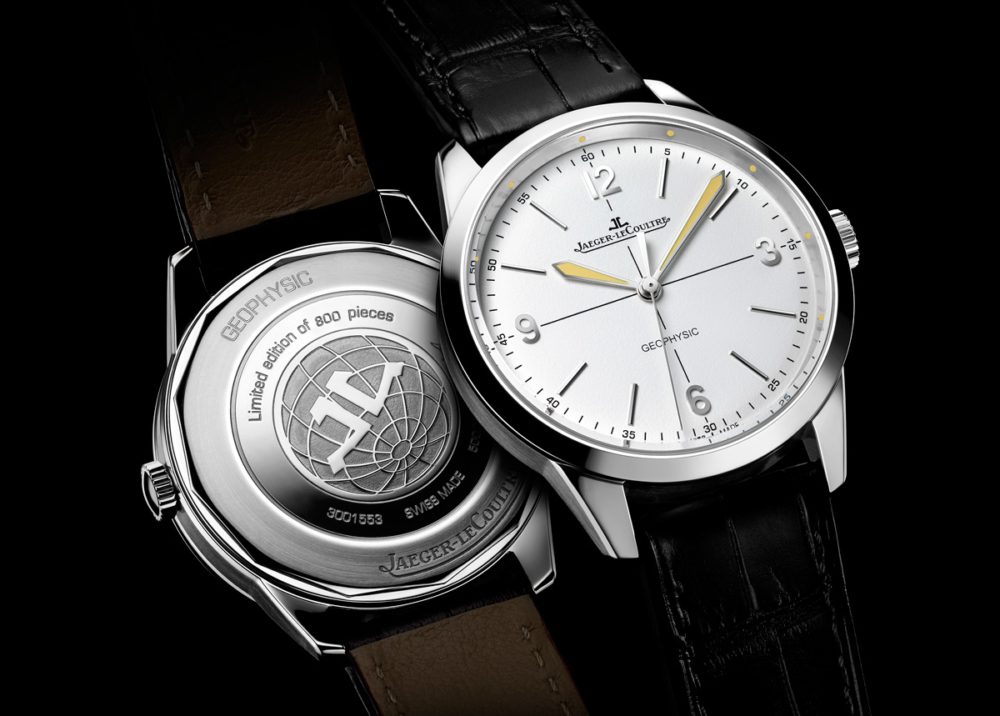 Through the 1950s and 1960s, Jaeger-LeCoultre, which had become a registered company in 1937, continued to innovate. It launched a self-winding movement, devised a power reserve indicator, created the Memovox alarm wristwatch, and the magnetically shielded Geophysic. It did get involved with quartz movement development as a shareholder of CEH (Centre Electronique Horloger) where the Beta21 originated. Jaeger-LeCoultre brought out a disc calendar quartz design with a modified Girard-Perregaux calibre, but it still continued to develop mechanical calibres alongside.

After being bought, along with IWC, by German car instrument maker VDO in 1978, it was acquired by Richemont in 2000. And that is when the resurrection of the Reverso really began. Realising its iconic potential, Richemont put it front and centre, taking that rectangular case as a base and a platform for experimentation.

Since then, this instantly recognisable elongated rectangle has been given a tourbillon and a platinum case (not exactly polo-pitch fodder), been given a dial on both sides powered by a single movement and called DuoFace; had chronographs and minute repeaters added to its compact form. 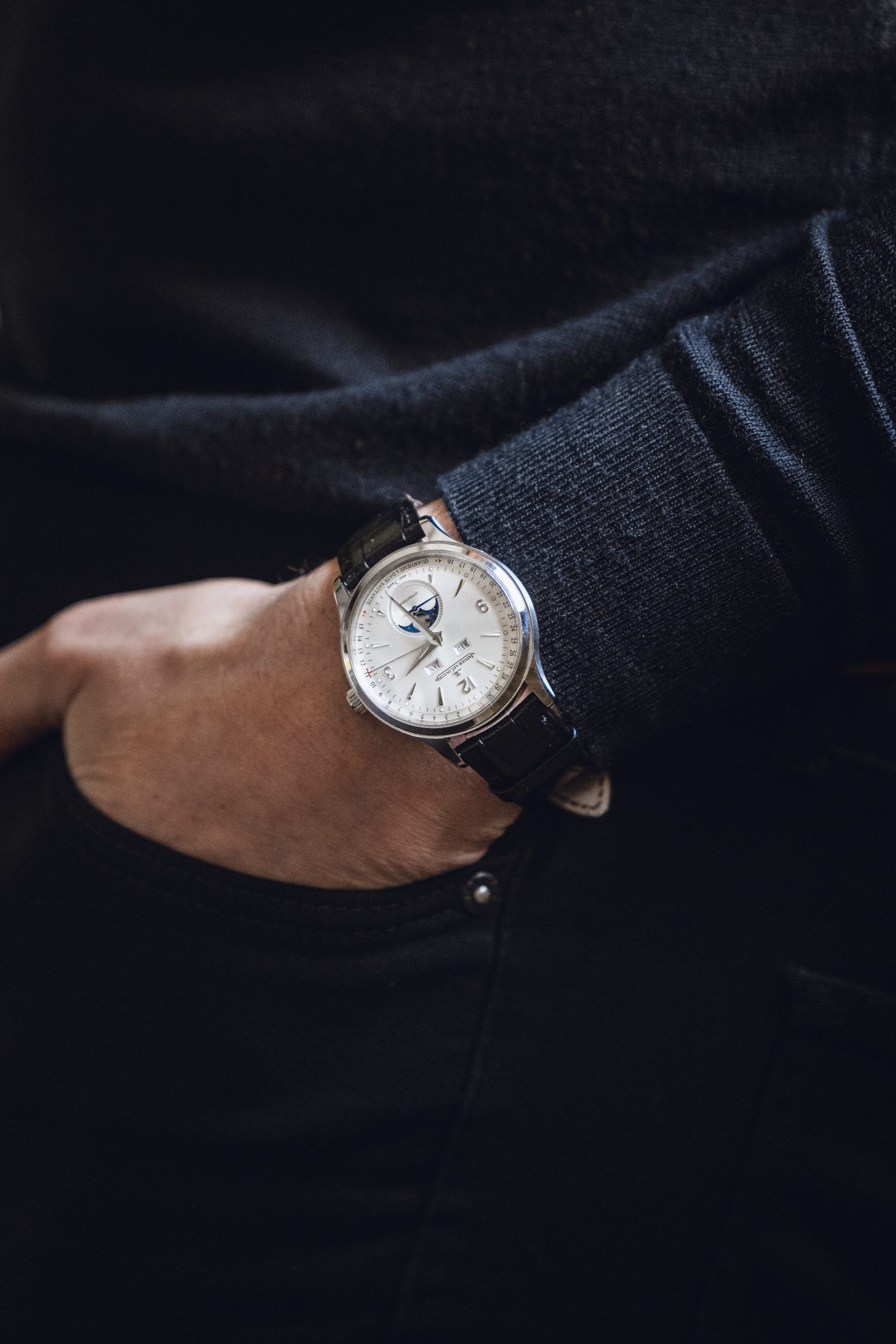 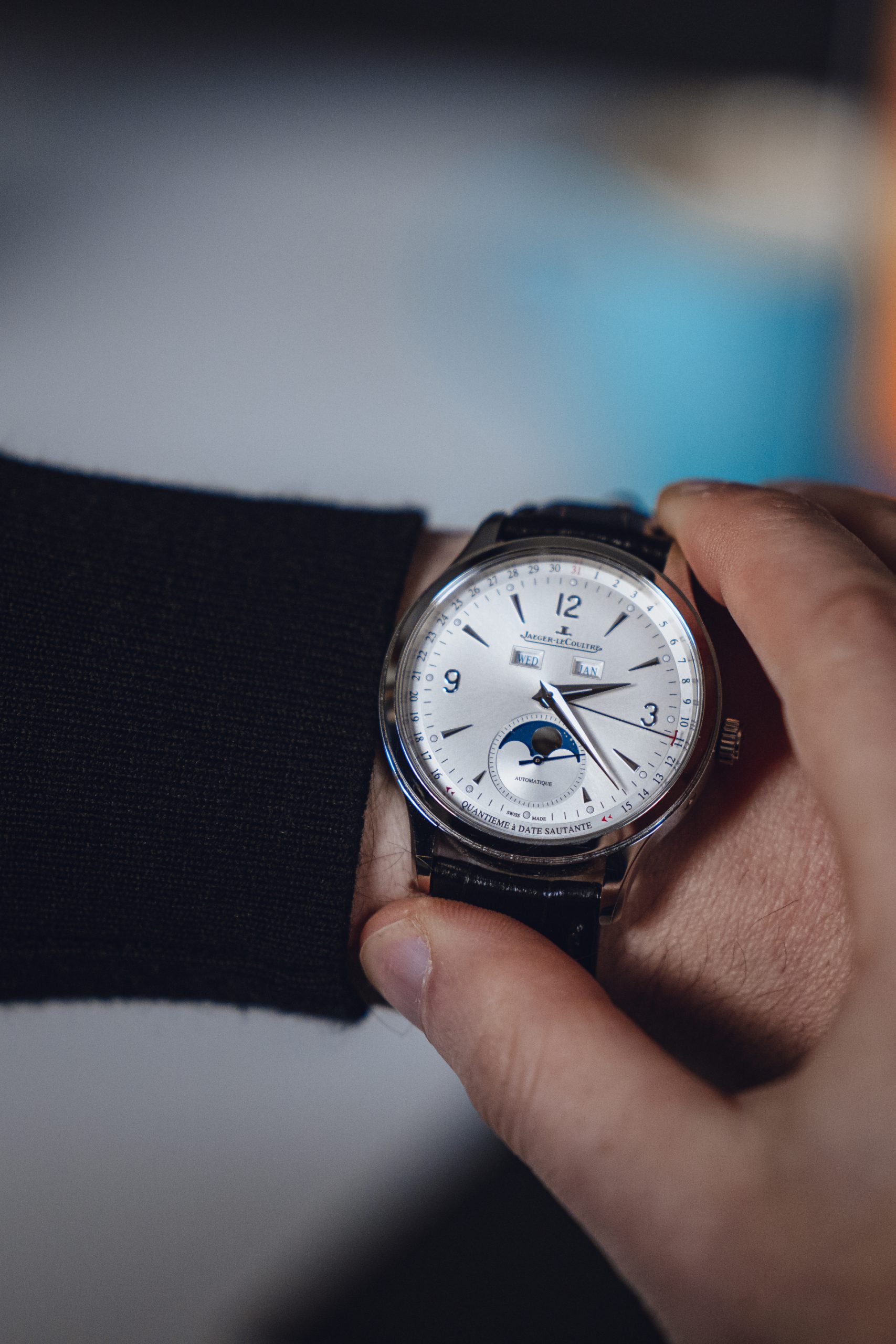 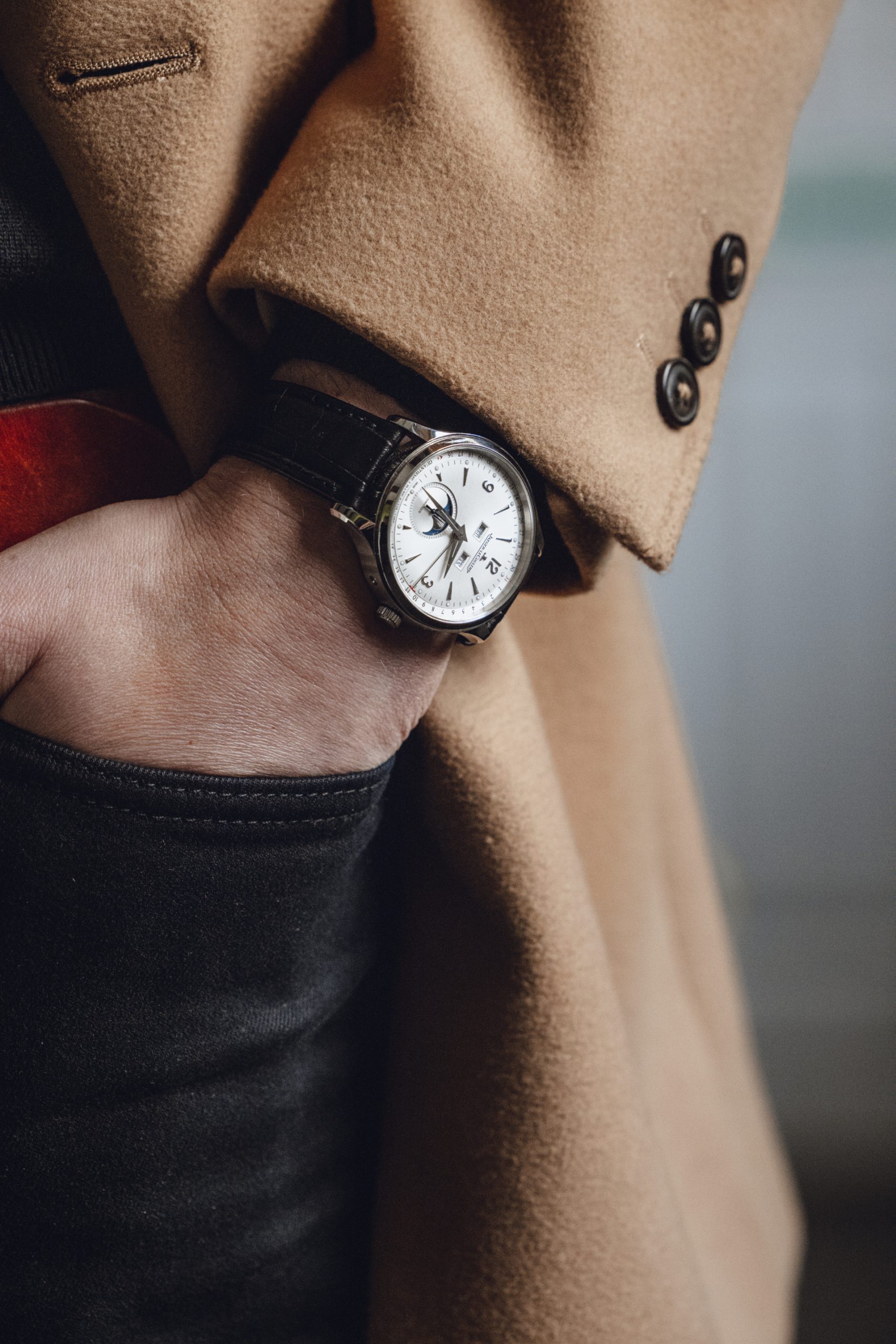 And then in 2021, it entered Jaeger-LeCoultre’s Hybris Mechanic line of extremely complicated watches as the Hybris Mechanica Calibre 185 Quadriptyque. This is a watch with a jaw-dropping four dials and 11 complications, including a flying tourbillon, minute repeater, and one dial dedicated to showing the three different versions of the lunar month.

There’s the synondic – the amount of time from one new moon to the next, usually rounded up as 29.5 days. Next is the draconic, which takes into account the slight incline of the plane of the elliptic of the Moon’s path around the Earth, 5.14º, and the north and south Nodes where the moon’s orbit and the elliptic’s plane intersect. It equates the lunar month as being 27 days, 5 hours, 5 minutes, and 35.8 seconds, with the Nodes rotation in the sky taking 18.6 years to complete.

The third display is for the Anomalistic cycle. Given the Moon’s orbit is elliptical it has a point furthest from the Earth, the apogee, and a point nearest, perigee; the line between the two being the major axis of the orbit. Apsides is the collective term for the apogee and perigee and the Anomalistic cycle is the length of time for the Moon to return to an apsis, which is 27 days, 13 hours, 18 minutes and 33.2 seconds.

And this all works via mechanics. Complicated doesn’t even being to cover it. 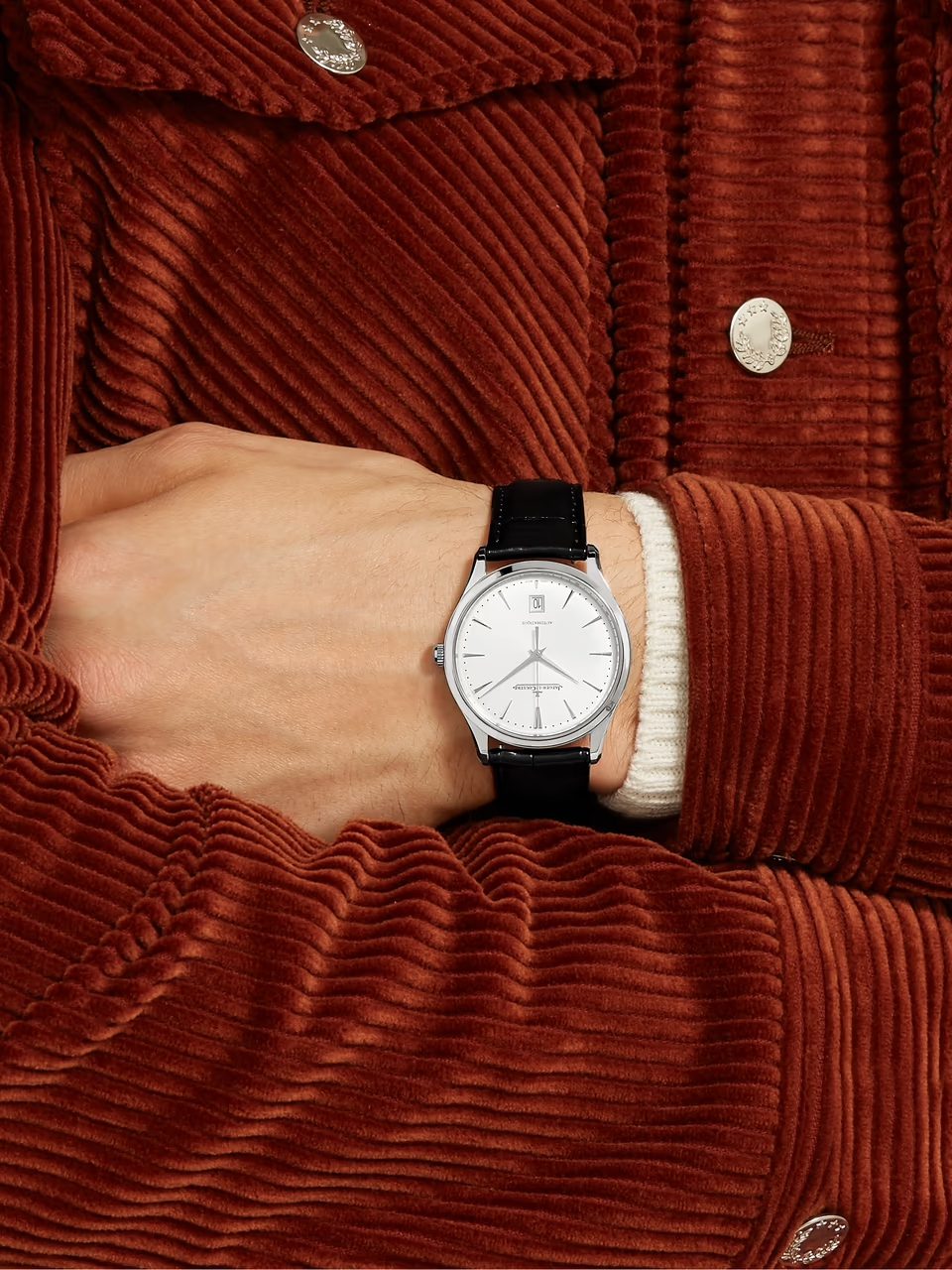 It’s not just about the Reverso, Jaeger-LeCoultre’s line has expanded to cover all your watch wardrobe needs. There’s the chic Master Ultra Thin collection of classically elegant timepieces, while its compatriots, the Master Control and Master Grand Tradition, pay homage to the brand’s 1950s and 1830s heritage respectively.

The Polaris is your quintessential steel sports style, while the Duometre, with its two independent balances wound by a single crown, illustrates Jaeger-LeCoultre’s spirit of mechanical innovation.

Everything is still made and assembled in Le Sentier, bar the sapphire crystal and straps, and each watch is subjected to a series of six exacting tests, such as water, temperature, shock, and magnetic resistance. These tests are done over six weeks, or 1,000 hours, as part of Jaeger-LeCoultre’s “1,000 Hours Control” verification process the brand set up in 1992.

It’s just another example of how, despite being entrenched in the history of the Vallée de Joux, Jaeger-LeCoultre continues to have its sights set on the future.

Three Watches To Own 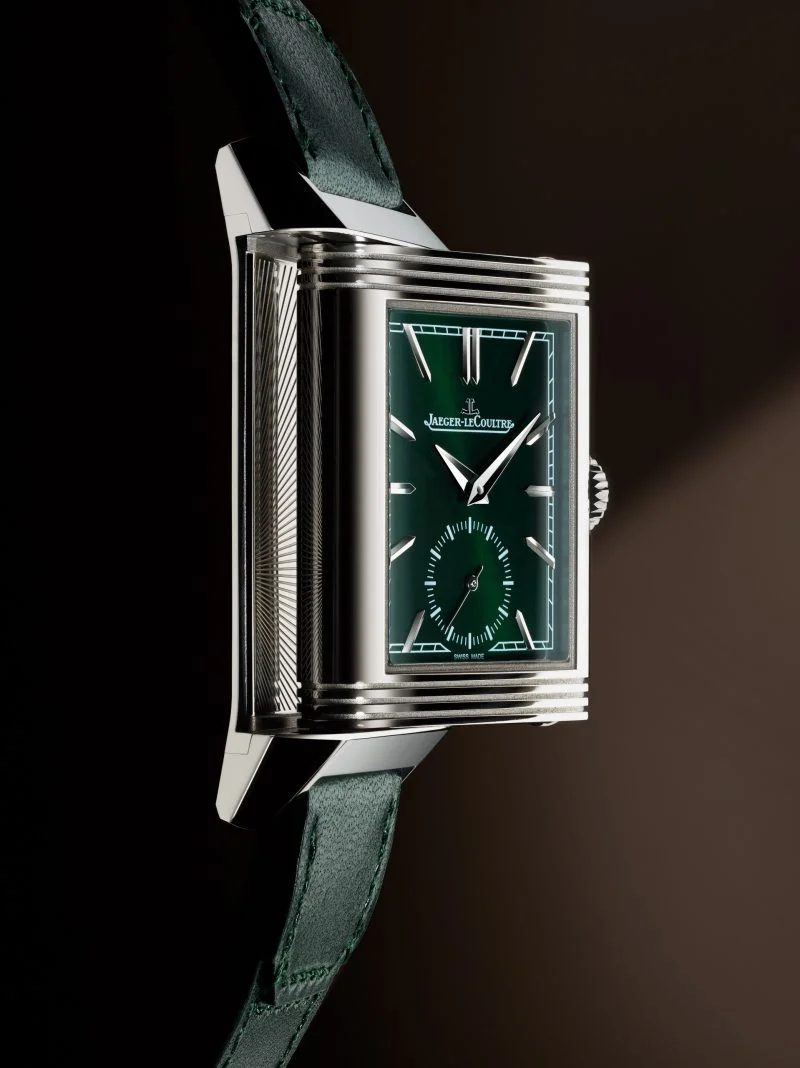 If you’re going to own a Reverso, it has to be steel and it has to be manual wind. However, Jaeger-LeCoultre has a reputation for dial and strap combinations in fabulous colours, hence this green model. It takes the classic Reverso and gives it a dash of modern panache. 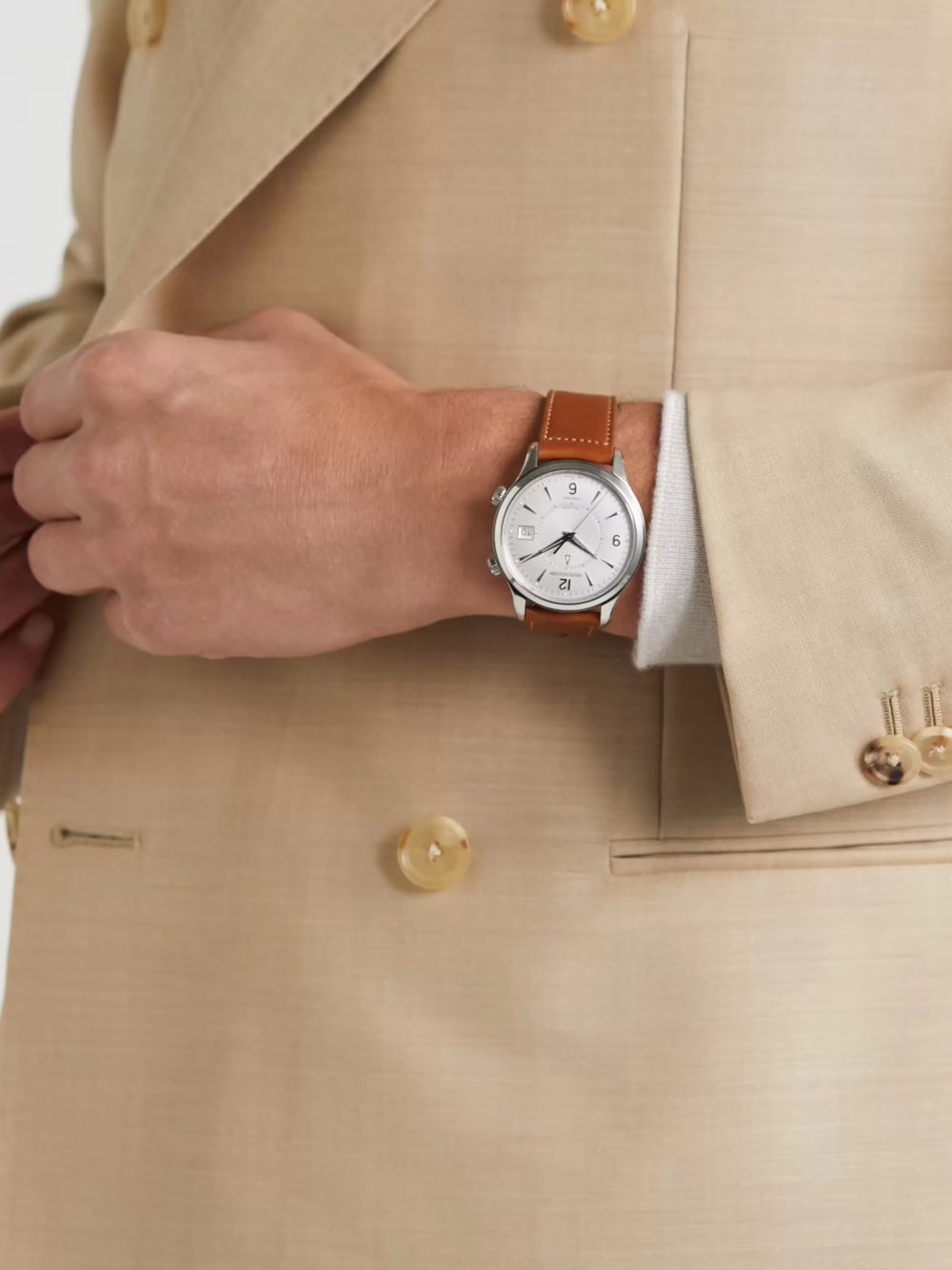 This is the original alarm watch given a bit of a 21st century makeover. The dial takes the design cues of the original – smaller inner circle and slim-line indices, and just sharpens them a little, adding numerals at 6,9 and 12, and a date window at 3. It still makes the old-school bell sound, which just adds to the charm. 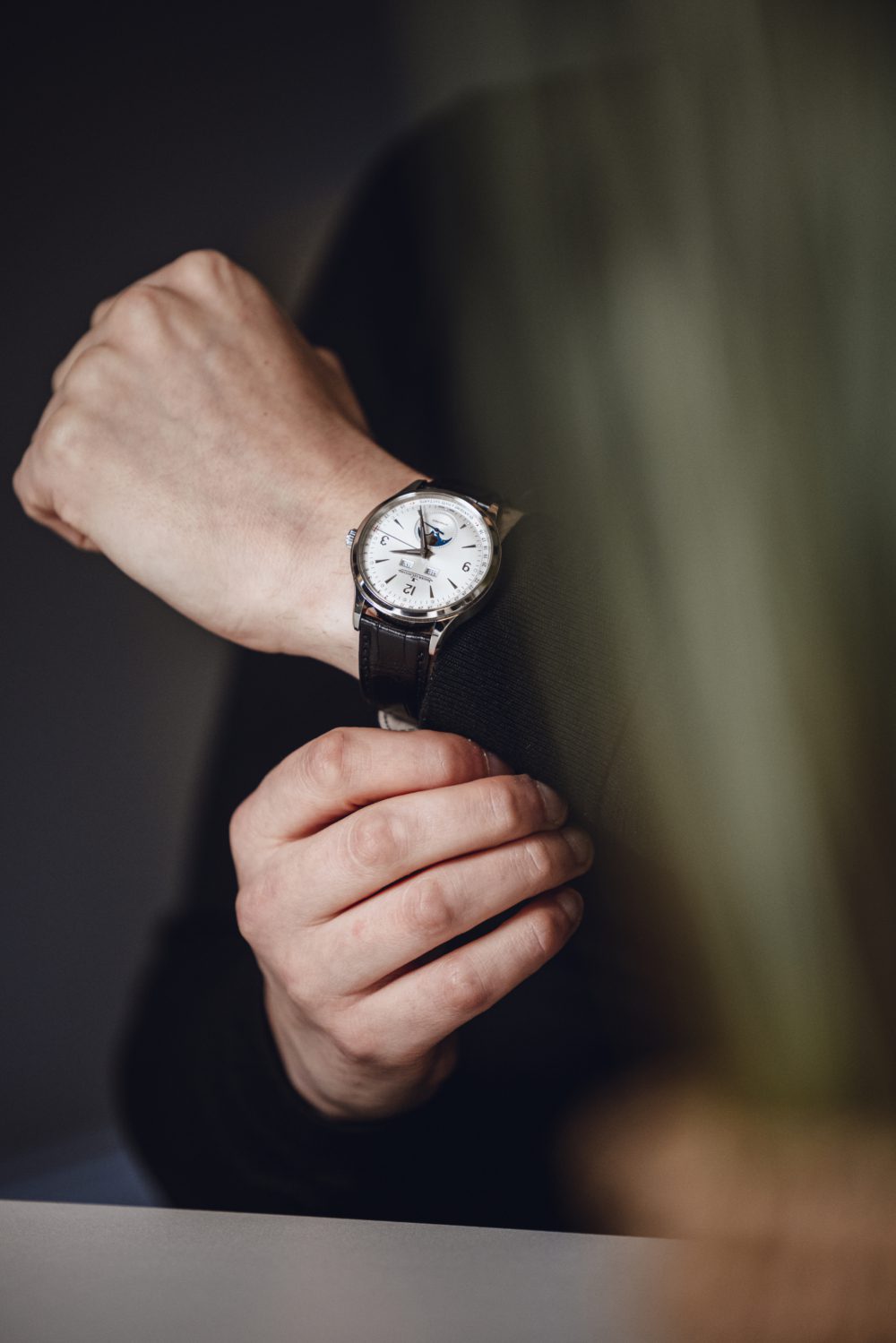 Jaeger-LeCoultre has found an elegant solution to the problem of cluttered dials on calendar watches – use the outer ring for the date indication. Rather than move the moonphase from six o’clock, Jaeger-LeCoultre has made this a jumping date, so in between the 15th and the 16th you also have the added frisson of joy from seeing the date hand fly past the moon. It’s a witty touch usually only seen in its Rendez-Vous collections, which makes it even more of an enjoyable surprise here.

Original photography of the Jaeger-LeCoultre Master Control Calendar by Ape to Gentleman.