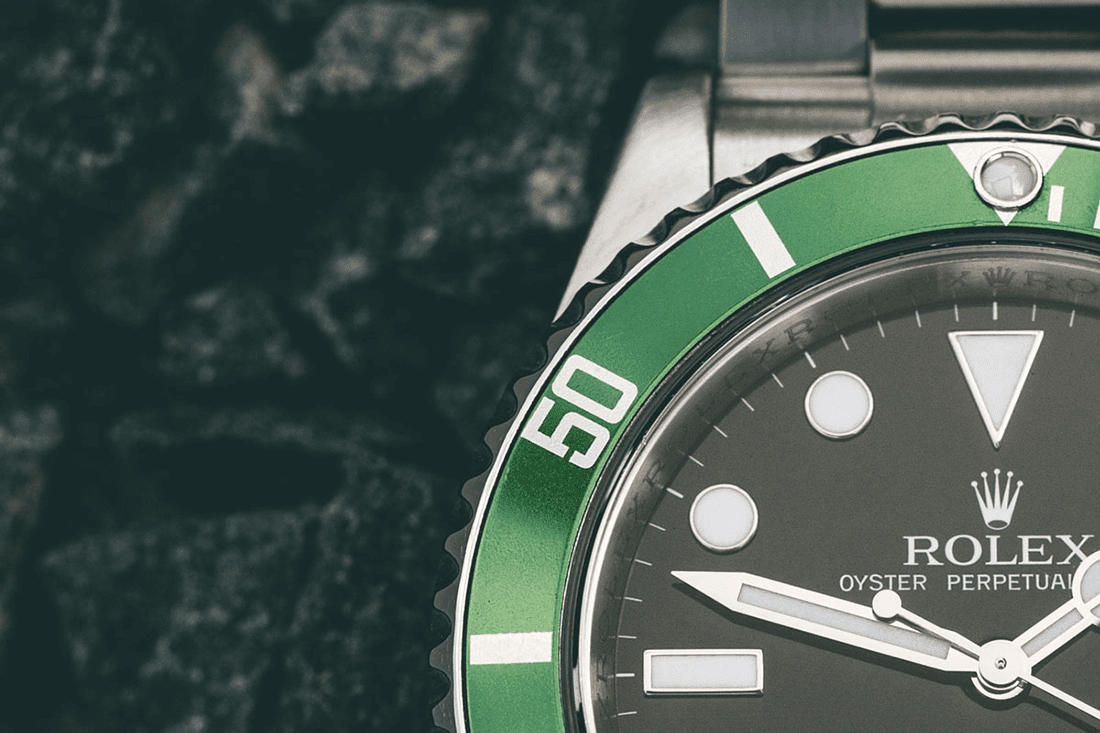 Why pre-owned? You might ask. The truth is pre-owned luxury watches have been an excellent investment sector since the financial crisis and values continue to show growth year-on-year. We are by no means saying don’t buy new- there’s nothing like putting on a fresh timepiece for the first time, but pre-owned vintage watches are not to be discounted.

Demand for pre-owned watches has been rising over recent years led by brands like Rolex whose watches now resell for similar to and at times more than first hand editions. Rare and interesting vintage watches have been hitting record prices at auction houses- Rolex & Patek Philippe are far and away the main draws at watch auctions. The rise in price does depend on the brand and model and it can often be impossible to know which watch will turn out to be the next vintage Daytona.

Watches that are very popular but in limited supply as well as discontinued and limited edition models are usually the best options. We recommend looking for watches with a short production run that may not have been too popular at the time of retail- the recently discontinued Rolex Sea Dweller 116600 is being touted as a good one for the future for instance.

Like any pre-owned market, fakes and counterfeits are a problem and in the watch market there are much better made than before examples, so it’s essential to buy from a credible retailer.

Beware of “Frankenwatches” – these are watches that may consist of some original parts, but the more expensive elements of the watch will have been swapped for aftermarket or counterfeit parts. As a mechanical item, you need to make sure the watch is functioning properly and that none of the parts have been swapped out or replaced with counterfeits.

It can often be difficult to tell the condition of a watch due to poor quality imagery, so make sure the retailer is trustworthy or has somewhere physical you can view the watch. If the watch comes with its original box and papers you can check to see if its not been reported stolen too.

Released to celebrate the Rolex Submariners 50th anniversary, the Rolex Submariner 16610LV can be identified by the green bezel insert and black dial combo- nicknamed the ‘Kermit’ amongst collectors. A relatively short production run has made genuine models harder to find.

Beware of regular Submariners that have had the bezel insert swapped for an aftermarket one. Look for models with the original guarantee papers and make sure the reference number ends in ‘LV’. This stands for lunette verte and indicates that the watch is a genuine anniversary model. Look for F serial models – this indicates a production year of 2003 which is the actual anniversary year of the Submariner. M serials (end of production line) are also popular with collectors and can sell for high prices. The later versions of the 16610LV also have the rehaut Rolex engraving around the inside of the bezel.

Prices for the 16610LV start from approximately £6,500 and can rise to over £10,000 for rare serial number models in unworn condition.

There is fantastic heritage behind the Day Date range – it has been worn by many world leaders since its introduction in 1956, earning the nickname ‘Presidents watch’.

The 1800 references were produced between 1963 and 1978 and comes in a variety of dial colours, the most common being champagne. Prices have been steadily rising over the past few years and the watch represents fantastic value in the current market. 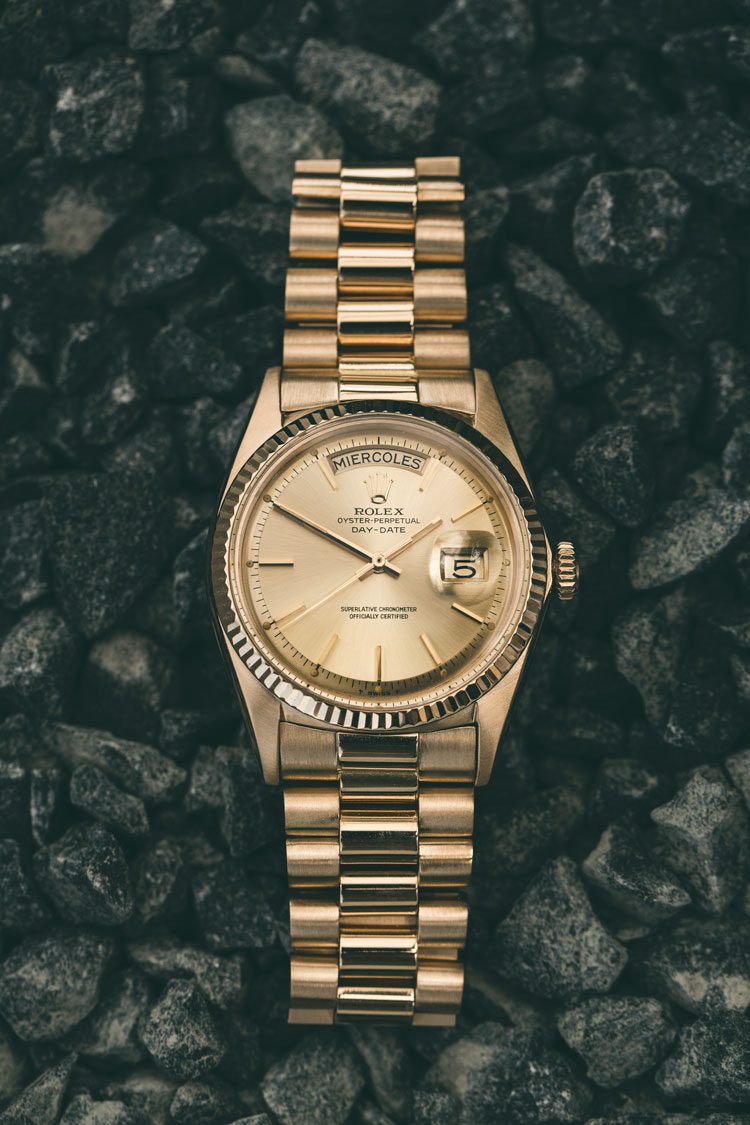 Only available in precious metals – yellow gold, pink gold, white gold and platinum- the reference is easily recognisable by it’s ‘stepped’ dial – looking towards the edges show a steep slope into the side of the watch case. Most were sold with the ever-popular President bracelet, which can be spotted by its rounded three-link design. Also available on leather straps and Oyster link bracelets.

Prices for these models can be as low as £6,000 when purchased on a leather strap. Expect to pay upwards of £8,500 for one on a president bracelet.

Known amongst collectors as the ‘Zenith Dayonta’ due to the movement being manufactured by watch company Zenith. The Rolex Daytona 16520 is identifiable by the sub-second register being on the left side of the sub-dial cluster – on newer models it is positioned low-centre. The black dial versions have solid black rings around the sub-dials, as opposed to the newer models that have silver. Prices have been steadily rising over the past few years with current models in good condition starting at around £12,000 and rising to over £25,000 for rare models. 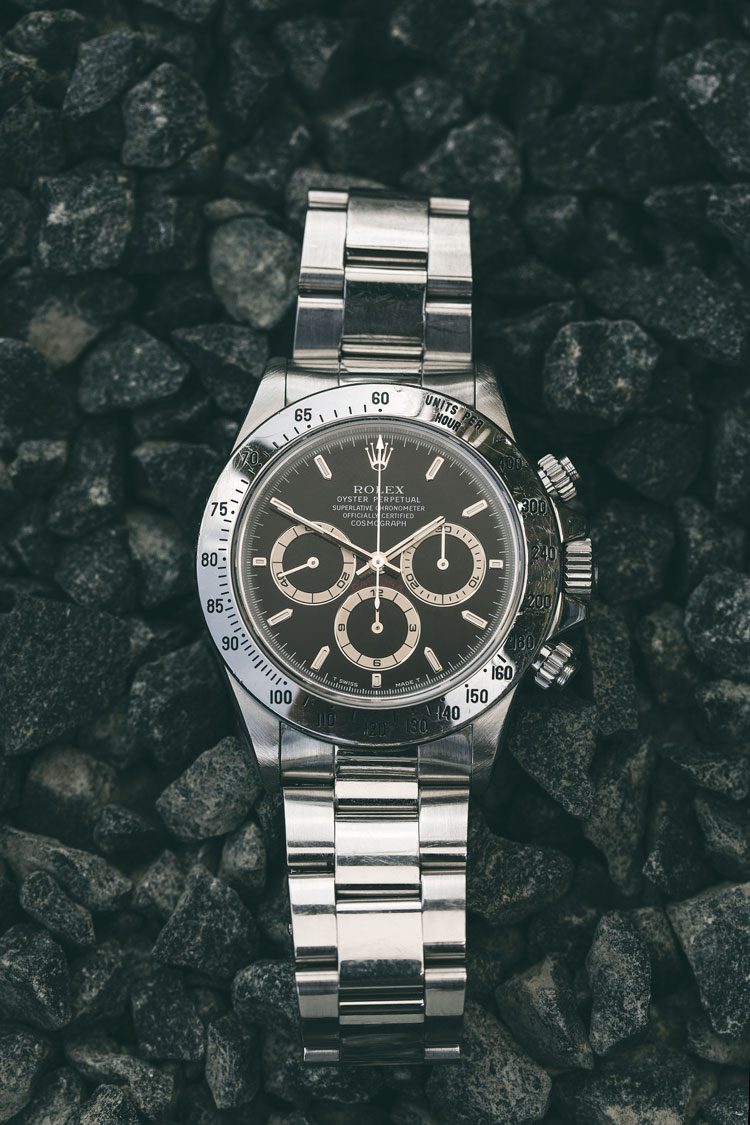 A special mention should go to the “Patrizzi dial” 16520 which is a rare variant within the Zenith Daytona reference. It’s identifiable by the brown coloured sub-dial rings which is caused by a fault in the application of the protective layer of varnish that covers the dial. This has degraded over time and has caused the silver in the sub-dial to oxidise and change colour. The defect was discovered by auctioneer Osvaldo Patrizzi and has been sought after ever since. Prices for these watches can fetch over £20,000.

The newest model Royal Oak chronograph with a new larger 41mm case size sticks faithfully to the design of the original watch by famed designer Gerald Genta. The retail price for this model is £19,500 but can be found on the pre-owned market for circa £15,000. 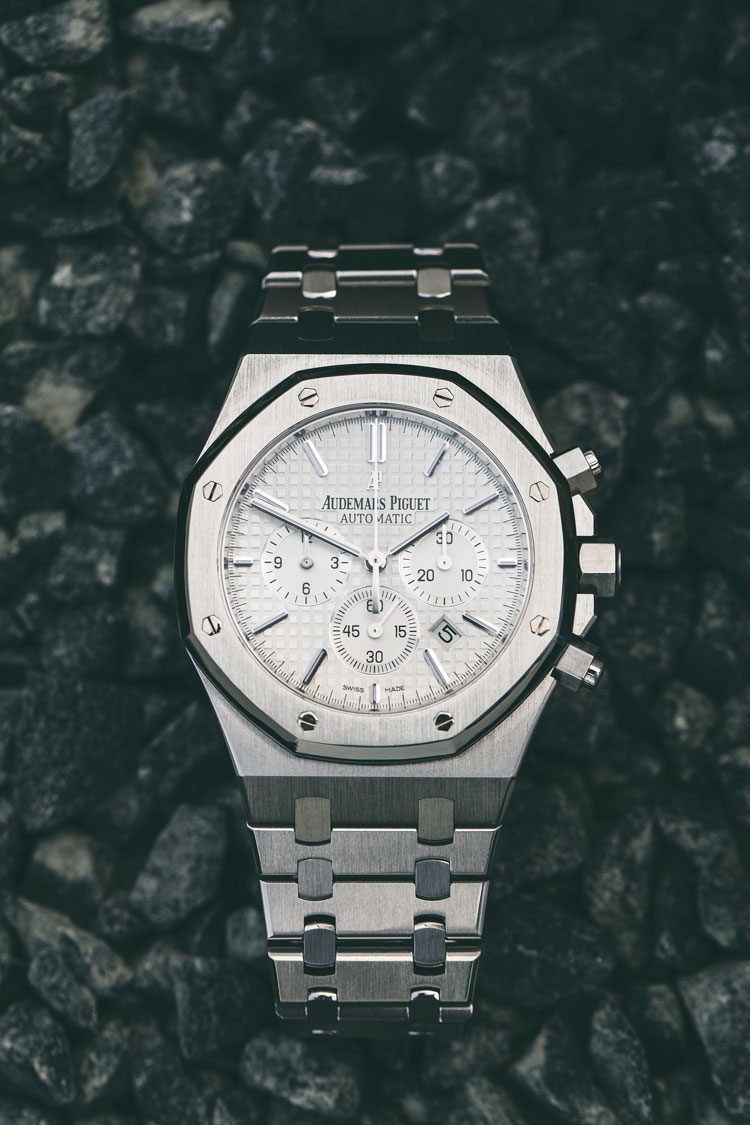 There is an incredible amount of craftsmanship in these watches and the finishing on the bracelet is of the highest quality. It could be a potential future classic with Audemars Piguet growing in popularity each year and the Royal Oak being the best selling model in the company’s line up.

This fantastic looking Rolex watch boasts a decent splash of colour and is useful for frequent fliers with the ability to track a second time zone. It’s available in three bezel colours; blue and red ‘Pepsi’, red and black ‘Coke’, and plain black. The Pepsi and Coke variants are more popular and command a higher price. The Rolex GMT Master II is consistently increasing in price as demand for the watch goes up- further helped by Rolex who do not make either the Pepsi or Coke versions in stainless steel anymore. 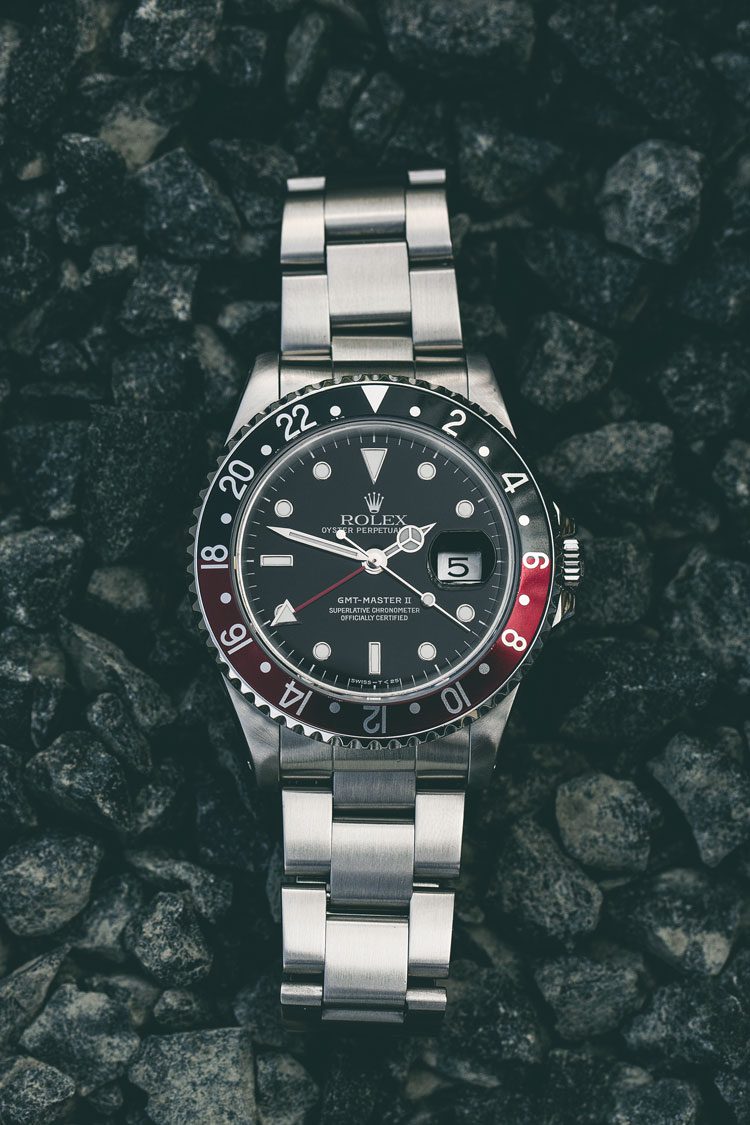 Prices start from approx £5,750 and can rise to over £10,000 for rare models with original documentation. Model references of note are the 16760 “Fat Lady” – named after the larger case lugs and crown guards and the 16710 with an M or Z serial number indicating production in 2007 – the final year this reference was made. The latter is currently available at a reasonable price and will likely increase over the next few years.

A great astronomical heritage to this watch – an early version was used in the Apollo 11 Moon landings and has been the choice chronograph for astronauts and space agencies for over half a century. 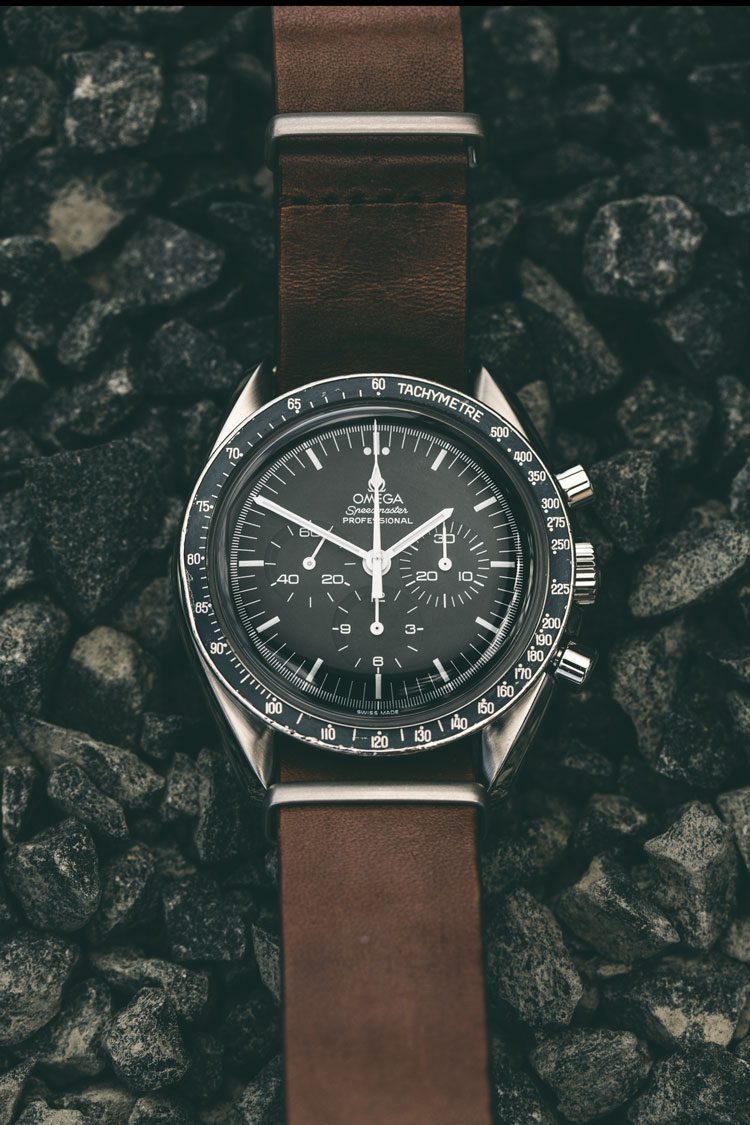 Instantly recognisable by the black dial, contrasting white hands and markers and indented sub-dials- prices can vary depending on age and condition, but Speedmasters are generally a good entry point into vintage chronographs. Expect to pay around £2,700 for the later vintage models, rising north of £10,000 for pre-moon landing models.

Look for watches in original condition with even patina – a discolouring of the luminous paint – on the hands and hour markers.

This is the larger version of the Submariner made for professional divers, recently discontinued and replaced by the 126600 this year. Rolex fans are not as enamoured with this version which is good news for owners looking to sell the now discontinued 116600.

A short production run (2014-2017) and not a particularly strong seller – has all the hallmarks of a future classic investment piece. Prices are starting to creep up, so it’s a good idea to buy quickly- it’s definitely one for the future. Expect to pay between £8,500 and £9,500 for one in pre-owned condition. Unworn models, especially those with 2016 production serial numbers will likely be the models to fetch the highest prices in years to come.

Where to Buy, Who to Trust

There are a few good pre-owned luxury watch specialists around but after various conversations with xupes.com – these guys really know their stuff, and are Ape Approved. They’ve also shared a very interesting ‘calculator’ which proves purchasing a pre-owned luxury watch is a better long-term investment than placing your financial savings in a traditional Bank of England ISA, take a look here.