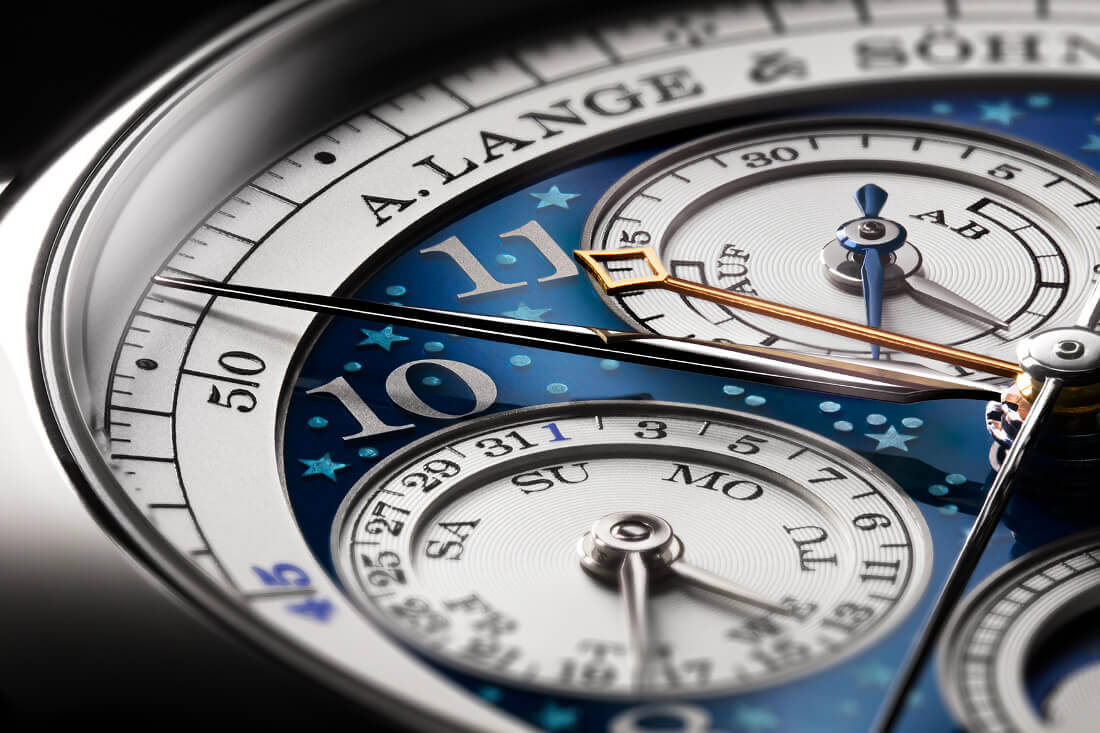 The dial and the hinged cuvette of the watch consist of blue enamelled white gold with elaborate relief engravings. The movement also stands out, with the combination of a split-seconds chronograph and a perpetual calendar with a moon-phase display. In January 2013 at the Geneva Salon, the 1815 Rattrapante Perpetual Calendar was revealed as a demonstration of the complications and sophisticated mechanical ensembles involved in precision watchmaking.

This complex instrument was used as the starting point for a limited 20-watch Handwerkskunst edition. It is the sixth A. Lange & Söhne model with this attribute, which describes artistic decoration of the movement, dial and case. With this model, the finishers, engravers and enamel artists were confronted with the challenge of raising the decorative opulence of the watch to the next level by using rare and revived techniques.

The watch is the first model to combine enamel art and engraving on its dial. Solid white gold combines with the deep-blue enamel, beneath which the engraved stars appear as a decorative extension of the moon-phase display. Arabic numerals are used to mark the time and calendar indications with the rhodiumed white-gold hands, as well as the power reserve indicator. The colour of the enamel is matches the lunar disc as well as the blued-steel minute-counter hand, contrasting with our recessed subsidiary dials in argenté-coloured white gold, with the chronograph hand standing out particularly, being crafted from gold-plated steel. The hinged cuvette that protects the sapphire-crystal caseback continues the moon theme, depicting the goddess Luna, the ancient mythological personification of the moon. The split-seconds chronograph allows the measurement of lap times and consecutive times, and is controlled by two column wheels – one for the chronograph and one for the rattrapante mechanism, which is activated by a pusher at 10 o’clock. The perpetual calendar mechanism correctly displays the individual durations of each month in the course of a calendar year, including all leap years until 2100. Integrated in the subsidiary seconds dial at 6 o’clock, the moon-phase display is calibrated to remain accurate for 122.6 years, and the manually wound movement has a maximum power reserve of 42 hours. A power-reserve indicator reminds the owner when it is time to rewind the watch.

The 1815 Rattrapante Perpetual Calendar Handwerkskunst Watch, by A. LANGE & SÖHNE