Cargo pants have been through a lot. Beginning life in the British military, they were originally designed as a functional garment, playing their part in making the soldier’s life easier on the battlefield. But following World War II, their admirable reputation was ruined by the Western tourist, who adopted them alongside their sandals and socks, and wrap-around sunglasses – a look that instantly marked out the wearer as someone who had no idea of how to dress, or indeed where they’re going.

So how exactly did cargo pants turn it around, becoming one of the coolest trouser options available in our arsenal today? This remarkable transformation didn’t occur overnight; instead it took 90s skate culture and menswear’s workwear obsession to bring them back to the fore. Thinking of taking the plunge yourself? Here’s everything you need to know.

In a similar vein to many of menswear’s greatest hits – from trench coats to bomber jackets – cargo trousers were dreamt up for use in the military, specifically by the British Army. Prior to the World War II, the British wore ‘service dress’, a sort of semi-formal uniform introduced in the early 1900s. While undeniably smart, service dress was hardly practical, so in 1939 ‘battle dress’ began to be issued to soldiers getting ready to fight on the continent.

Designed for ultimate functionality on the battlefield, this new uniform was made up of a short, unstructured blouson-style jacket that buttoned to the outside of high-waisted trousers. For the first time, these trousers featured a large map pocket on the front of the left leg, making them as practical as the multi-pocketed top half. This was the birth of cargo trousers and they haven’t left the military since, with current day forces continuing to make use of the style’s practicality. 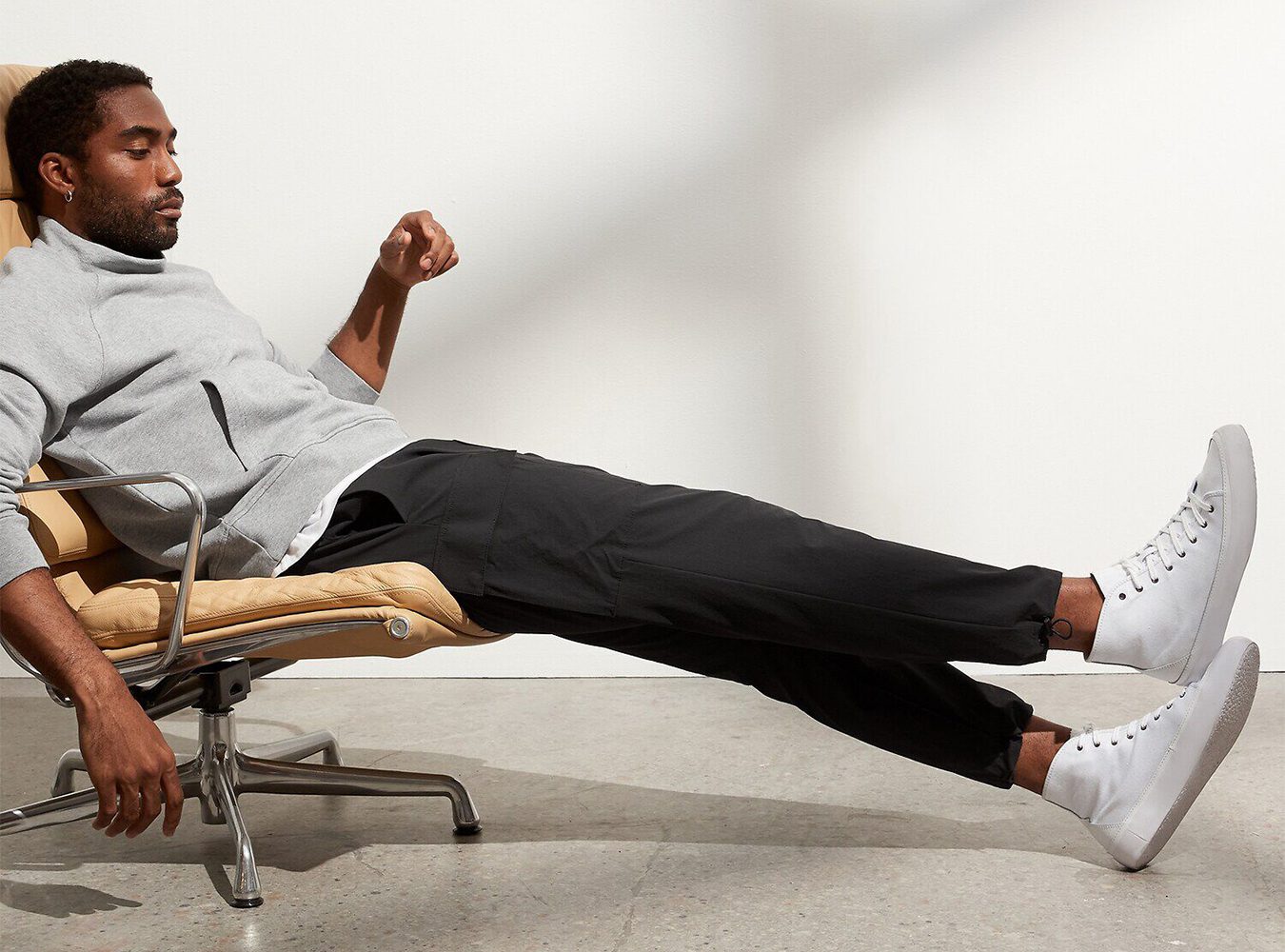 Cargo trousers did make the transition into civvy life, but it wasn’t particularly smooth. Short of their popularity with skate culture in the 90s and early ‘00s, they’ve not always had the best reputation. Perhaps it’s their traditionally bulky silhouette or the awful, zip-off three quarter length versions that plagued the wardrobes of ‘outdoor’ types and tourists, but cargos have always been near the bottom of the menswear ladder.

With the rise in the popularity of workwear, and with functional designs like chore jackets and work shirts, cargo trousers have had something of a renaissance in recent years. Brands have been refining their typically baggy cut and crafting them from more interesting yet still durable fabrics, giving the style a new lease of life.

When To Wear Cargo Pants Cargo trousers are rarely ever going to be suitable for wearing formally. While it might be possible to pair certain smarter cargos with tailoring, you’re largely going to want to wear cargo pants on more laid-back occasions.

The style is particularly good for when you want to switch up your usual casual bottom half. Cargos can replace jeans, chinos or drawstring trousers and be worn in virtually the same way, as they naturally pair well with T-shirts, Oxford shirts, classic knitwear and smart-casual outerwear. 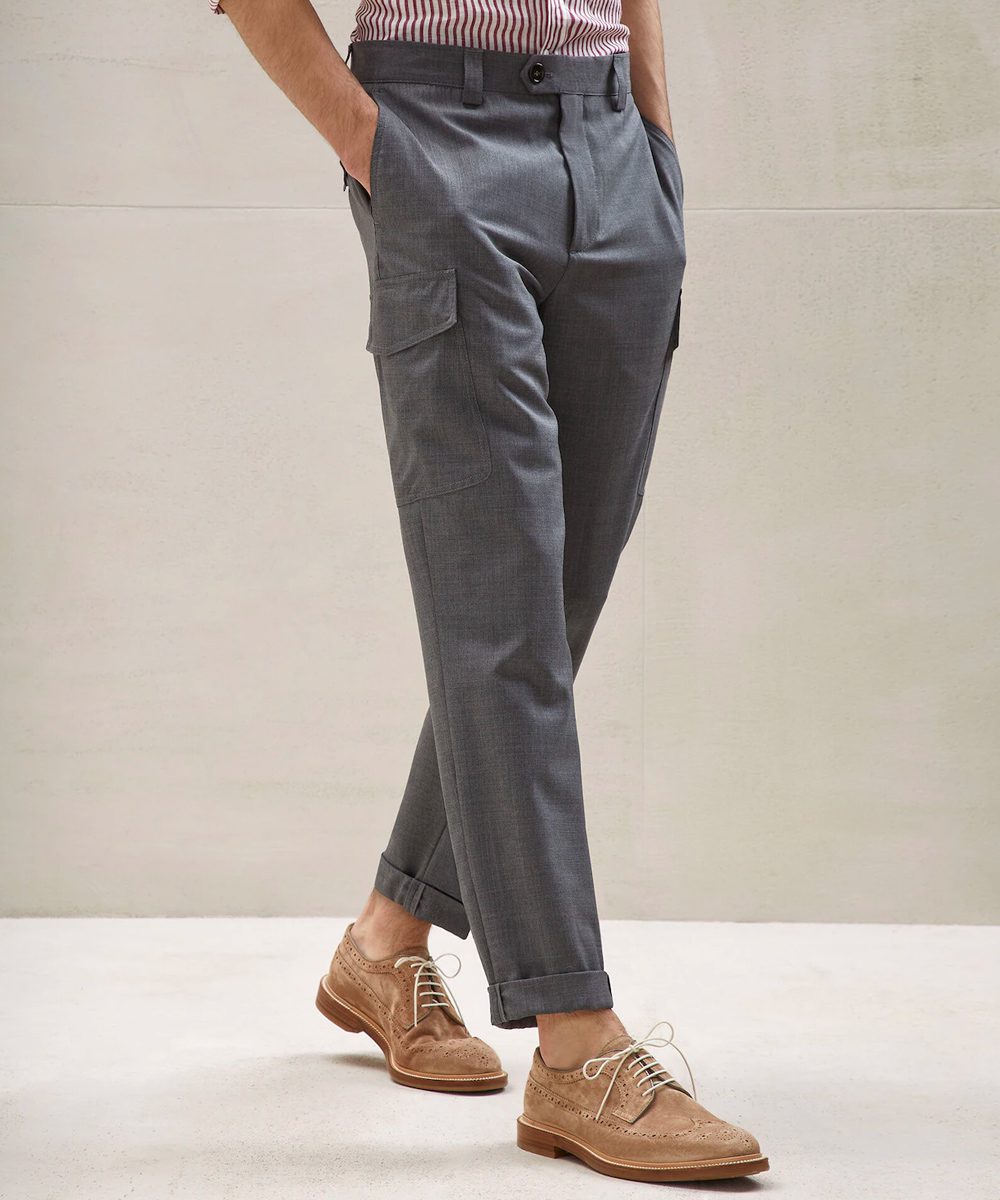 When you’re investing in cargo trousers, the most important element to pay attention to is cut, as this will largely define how and when you wear them. You can find cargos in fuller cuts with high rises from a number of workwear brands; styles that are essentially designed for manual jobs.

For a classic workwear-inspired look, you shouldn’t be afraid to go this route, but for something slightly smarter and easier to wear, look for a more tailored, slimmer leg. Slimmer styles are easier to dress up if you wish, and pair well with bomber jackets, Harringtons and merino wool knitwear. 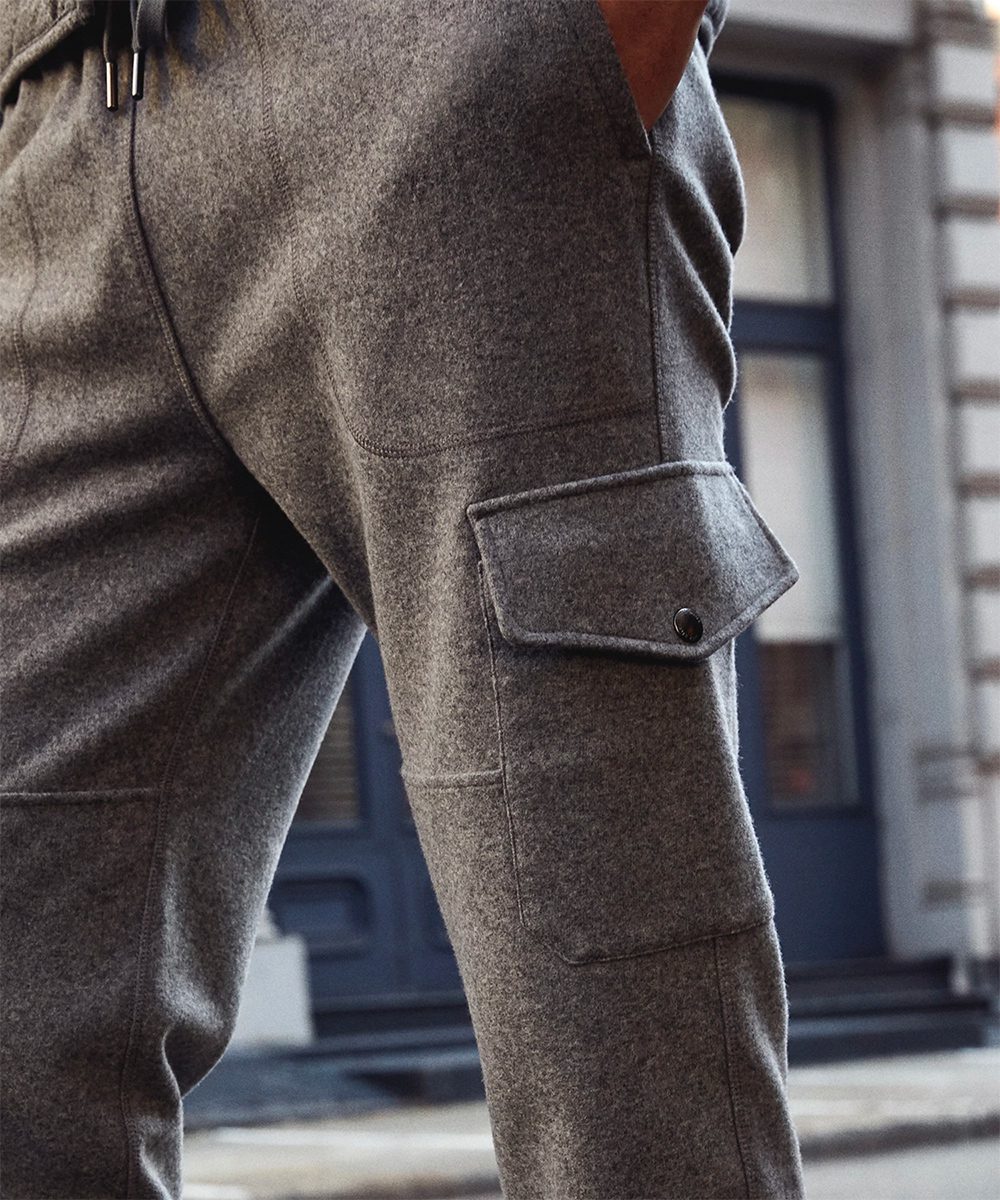 Due to their military and workwear heritage, cargos are widely available in hardy, durable fabrics like cotton twill and moleskin. These classic fabrics will of course give the trousers a more casual edge, making them perfect for wearing off-duty.

For a sharper look though, try cargos cut from more elevated fabrics including wool herringbone or even lightweight versions in lyocell-blends. These more formal fabrics perfectly contrast with the casual nature of cargos, resulting in a look you can make entirely your own. 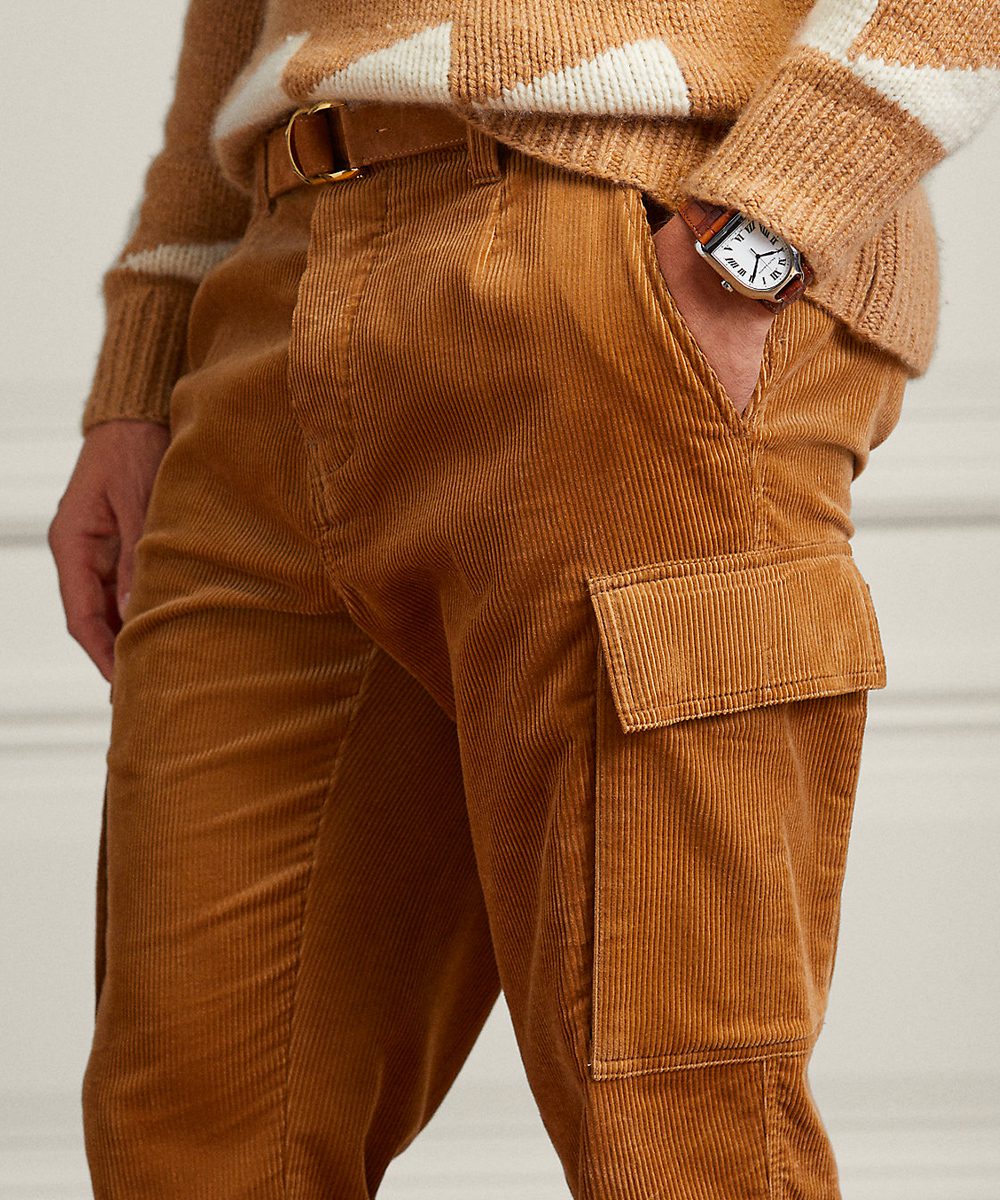 Look out for the pocket designs and placement when buying cargo pants. Traditional pairs come with bellows-style pockets with a pleat that allows them to expand and carry more in them. But numerous takes are available today; you might find flap pockets, button-down pockets or minimally-designed velcro pockets, which all offer their own flavour.

For classic American workwear, as well as modern updates to throwback styles, Carhartt is tough to beat. Naturally, the US brand produces a range of cargo styles to suit virtually all needs, from cotton canvas takes to more technical cargo jogger styles.

Stone Island is known for its use of highly technical fabrics, so if you you want cargo pants with a bit more of a contemporary militaristic look, the Italian brand is a safe bet.

While more commonly regarded for its preppy wardrobe staples, Polo Ralph Lauren isn’t shy of a military-inspired garment or two, as proven by its classic take on battlefield-ready cargos. Cut from sturdy cotton, they boast details including large bellows pockets and ankle ties at the hems.

Brunello Cucinelli could design a bin bag and it would still be refined and elegant. The Italian brand has crafted its unique style by playing close attention to fabric and cut, as proven by its cargo pants. You’ll find extremely soft cottons and silk-blends, as well as minimally-designed pockets that give its cargos a dressy feel.

Todd Snyder’s trouser range is one of the most impressive on this list. You’ll find everything from classic denim jeans to Gurkha-style tailored trousers complete with an integrated waist belt. Its cargos come in a number of styles too, from joggers to drawstring versions, all cut from soft yet durable fabrics.

Levi’s is a no brainer when it comes to denim – the US brand invented the five pocket jean, don’t forget. Because of this knowhow, its trouser range is among the best fitting you’ll find. For its cargo pants, expect slimmer, flattering cuts combined with classic flap pockets.

Popular with skaters and workwear fans alike, Dickies has long been a go-to for straight cut chinos. But its cargo pants are tough to beat, especially with functional detailing including reinforced knees, as well as rear flap pockets.

For a smarter take on the classic military style of cargo pant, Incotex might be the best option out there. It’s essentially taken its signature slim-fit chinos and crafted them with large bellows pockets on the side, making for trousers that are smart enough to wear with a cropped blouson jacket or even a blazer.

Similar to Stone Island, CP Company made its name experimenting with technical fabrics and innovative takes on classic designs – its goggled outerwear a case in point. Its cargo pants are contemporary in style, with simple snap button pockets, wide belt loops and slim legs, which pair perfectly with contrasting sneakers.