Long, swooping, suave and stylish, this former military mainstay was honourably discharged some time ago. Since then, it has gone on to find great sartorial success in the civilian world, having been remixed, reworked and reappropriated by countless designers and fashion subcultures over the years.

Originally designed for Army officers, and later adapted for the trenches of World War I, the trench coat has been around for well over a century. In that time it has graced the shoulders of Hollywood royalty, given the mods’ parkas some well-deserved time off, and captured the imagination of some of the fashion world’s most influential tastemakers.

Despite all of this, the trench coat has remained unchanged throughout. Always between knee and ankle length, always double-breasted, always with wide lapels, and always cinched with a belt at the waist. Outside of this, there’s some room for experimentation, which is perhaps why some brands make better trench coats than others.

Below, you’ll find our pick of the best trench coat brands in the world – from the founding fathers of this outerwear great, to the labels putting their own unique spin on a classic piece of design. But first, a subtle but important distinction.

What’s The Difference Between A Trench Coat And A Mac? There’s a degree of interchangeability between these historic coat styles but there are ways to distinguish them. The trench is the coat described above, with distinctive military features like epaulettes, D-rings and a storm flap. A mac is another long, waterproof coat but it has minimal design, usually single breasted with concealed buttons.

The name comes from the Mackintosh brand, whose founder developed a rubberised waterproof cotton in the 19th century. The same brand later made trench coats for the army, which is part of the reason for the confusion.

Despite the trench being a menswear icon, the amount of contemporary labels producing the style is small. Therefore, if you’re going to make this investment purchase, these are the specialist names you should be considering. Each can be trusted to deliver style and quality in equal measure.

London’s Burberry is one of two British labels widely credited with inventing the trench coat, the other one being Aquascutum. Founder Thomas Burberry built his eponymous brand on the back of the trench coat. To make the first versions, he weatherproofed individual strands of cotton and wool fibre, creating a resilient material that was highly water-resistant and breathable. He called it gabardine, and the label’s trench coats are still made from it today.

Burberry’s trench coats are instantly recognisable thanks to the iconic Burberry check pattern on the lining. The silhouette itself has been reworked by the label’s numerous creative directors over the years – most recently Ricardo Tisci, who infused it with a touch of streetwear for his first collection in 2018. Even so, the classic version has always been present, and is available today in five different cuts, from slim to oversized.

Founded in Glasgow in 1846, Mackintosh first became known for its rubberised raincoats. In functional terms, they were excellent, keeping the wearer completely dry and shielded from the elements. However, they did have a slight issue with breathability and could end up smelling a little off, so it wasn’t long before the brand branched out to other winter coat styles and different materials.

The trench coat is a silhouette for which Mackintosh is now very well known. The brand’s St. Andrews coat is a classic trench featuring a flattering fit and cut from traditional gabardine fabric. There’s also the option of interchangeable linings, which can be attached to the inner tab for added insulation in cold weather.

Prior to 2018, Parisian fashion label Celine was strictly womenswear. That all changed when renegade designer Hedi Slimane took the reins from Phoebe Philo and put out the brand’s first-ever menswear collection. Among the looks he showed, the trench coat featured heavily and has been a staple of Celine Homme’s fall/winter collections ever since. Expect form-fitting cuts, untraditional materials and subtle off-kilter details.

If it’s remotely smart and in any way preppy, you can bet good money that New York’s Ralph Lauren has made its own version of it. Trench coats, of course, are no exception, with almost every label under the RL umbrella having put out its own version over the years. Polo Ralph Lauren currently makes a rather nice take on the original, featuring an oversized cut and goat-suede fabric.

Celine Homme wasn’t Hedi Slimane’s first rodeo in terms of trench coats. This iconic overcoat style was also on heavy rotation when the Parisian designer was heading up Saint Laurent. In fact, trench coats have been a key part of Saint Laurent’s collections since the early years and remain one of the label’s staple outerwear offerings to this day. Expect exceptional quality, slim cuts and traditional details throughout.

Trench coats can be expensive, but they don’t have to be. If you want to get the look but aren’t particularly bothered about the fabrics, heritage or craftsmanship then Swedish high-street retailer COS has some attractive options for you. Are they made in England from traditional gabardine? No. Do they look the part and allow shoppers on a budget to get that classic trench coat look without bankrupting themselves? Absolutely, yes.

Shop now at COS

Traditional trench coats are fairly fussy designs: lots of buttons, fasteners, wide lapels and other bits and bobs. French designer Christophe Lemaire (who also does collections for Uniqlo) doesn’t go in for that sort of thing. His take on the trench is elegantly minimal. Without as many bells and whistles, the coat becomes something softer, less militaristic, especially in Lemaire’s drape-friendly cuts and earthy palette.

Trench coats have been cropping up in Bottega Veneta’s collections for years and this one has been no different. Creative director Daniel Lee has been reimagining the outerwear classic since his appointment in 2018, adding modern touches like an angular belt buckle and oversized epaulets, while getting rid of some of the traditional details for a cleaner, more minimalist look.

The Kooples has a habit of taking traditional fashion staples and lending a little French chic, androgynous styling and rock ‘n’ roll attitude. That said, the label’s trench coats are pretty faithful, albeit with more modern cuts and a rich colour palette. They’re practical too: the brand produces some styles in gabardine, for roughly half the price of some of the designers on this list.

Shop now at The Kooples

A lot of our homegrown brands here in the UK have taken their production overseas to bring down costs. But not Manchester’s Private White V.C. This premium outerwear label is built around classic silhouettes, reimagined in the highest quality fabrics, and proudly manufactures all of its pieces in England.

Private White V.C. recently produced a twist on the classic trench coat in collaboration with Simon Crompton of Permanent Style. It’s made from Ventile fabric and features several modern details, such as a slanted chest pocket and a detachable cashmere liner, as well as all of the original features that make the trench coat such a great piece of design.

How To Wear A Trench Coat The trench is one of the few coat styles that genuinely looks good worn over a suit. Wide shoulders and an ample body – especially on double-breasted styles – mean it slips over a blazer comfortably, without unsightly lumps and bumps. Opt either for a strong tonal look (black suit, black trench) or subtle contrast (grey suit, beige trench). And consider buying a size up if this is how you’re going to wear it. The practical benefits of the trench coat mean it can work as an everyday coat. Style it in the right way and it’s the perfect companion for winter strolls and restaurant dates, and it passes the business-casual test for the office, too. Try a layered tonal look with wool or twill trousers, an overshirt and, when the weather dips, a roll neck or funnel-neck zip-up. Finish the look with a beanie in a contrast shade. Sportswear doesn’t seem like a natural ally of the trench coat but it became a part of the football casuals uniform in the 1980s, possibly because the subculture was very keen on Burberry and Stone Island. To recreate the look, wear a beige trench over jeans and either a sweatshirt or zip-up track top. The contrast still works today and can be applied to modern dress-down staples like hoodies and cropped or baggy trousers. Wear it open and loose if the weather permits. 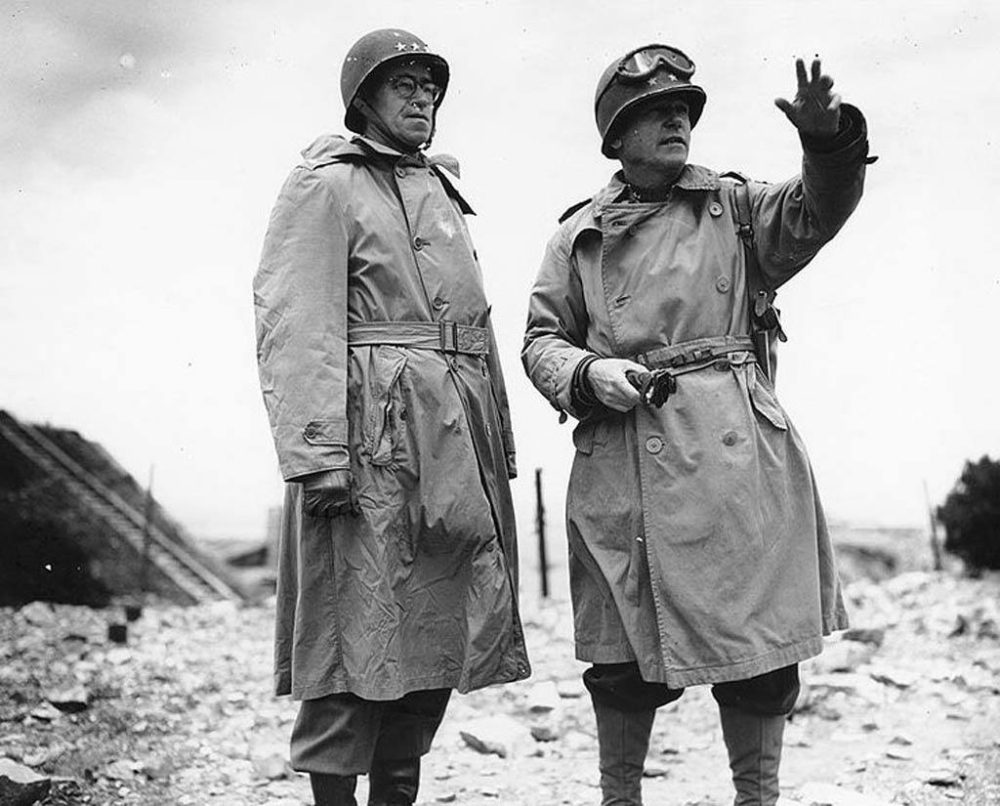 Back in the early 20th century, war came with a dress code. Ranking officers in World War I were required to dress appropriately, and the trench coat – named after the trenches where millions of men lived and died – offered a mix of tailored poise and practical design.

The long, double-breasted style would keep the rain and mud off your uniform and the cold off your body. D-rings at the belt would hold ammunition and other accessories, while the storm flap cushioned the recoil of a rifle. The epaulettes signified your rank. That all of these wartime features survive to this day tells you something about our ongoing fascination with old fashioned-masculinity and utilitarian design. 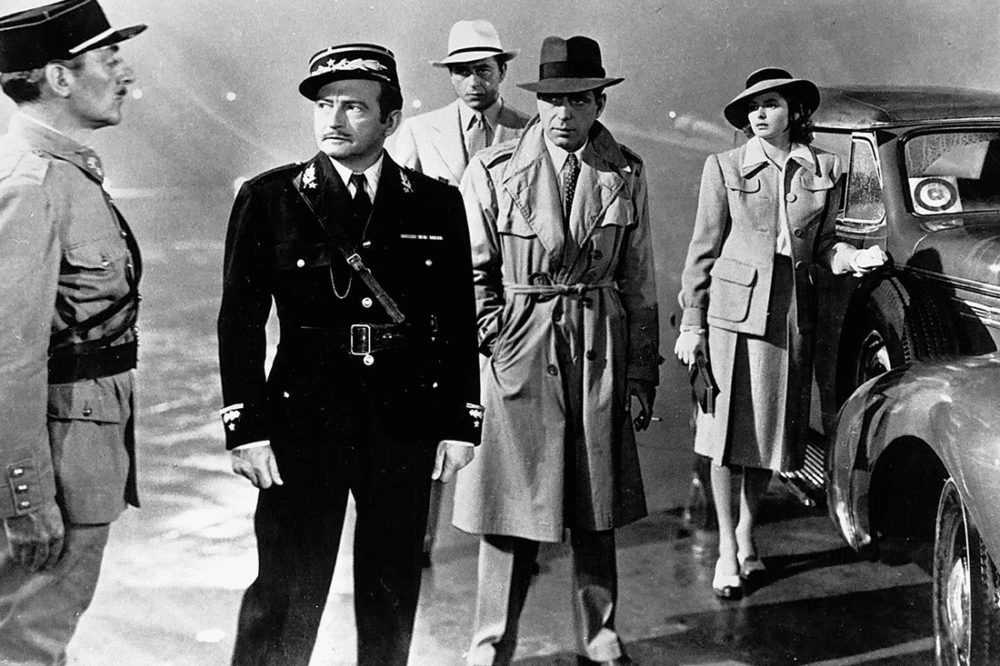 Burberry and Aquascutum are squabbling to this day about which company was the first to produce the style, but it’s generally accepted that both had an important role in its development. Thomas Burberry invented and patented the waterproof gabardine fabric in the latter half of the 19th century. Aquascutum, meanwhile, developed a waterproof wool and, in 1914, designed a trench for the British Army.

After the war, the style found new fame on the shoulders of Humphrey Bogart and other silver-screen detectives. And later, it would be adopted and subverted by style tribes like football casuals and goths. Today, its status as an iconic and historic coat means it’s worn by everyone from members club regulars and street style posers, pairing with streetwear, tailoring and practically everything in between. 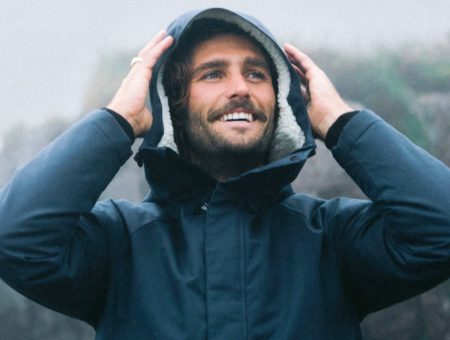