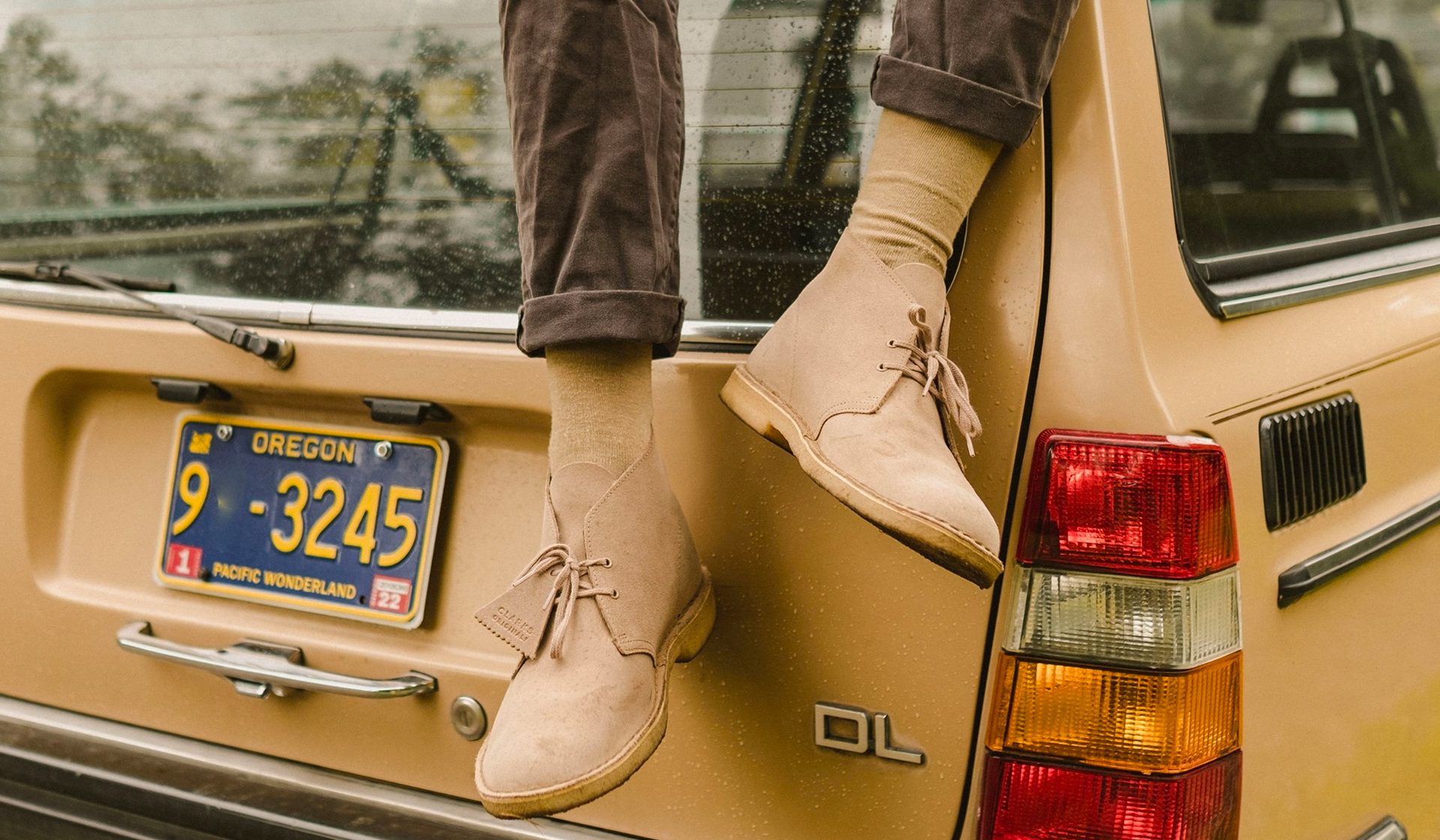 Looking for a laid-back alternative to shiny leather shoes? A pair of suede boots might be the answer. These soft, textured stompers work brilliantly for giving outfits a more relaxed touch, and are the perfect companions for smart-casual settings.

Don’t let the fear of rain damage put you off either. As long as they’re coated in a good protector spray, brushed regularly and taken off before you get in the shower, there’s no reason a suede boot can’t be worn for most of the year. Sure, you’ll probably want to avoid wearing them in torrential downpours, but that’s par for the course with most footwear.

To help you pick the right pair, we’ve compiled a list of what we believe are the best suede boots on the market. These are the icons, the bestsellers and the tried-and-tested workhorses. Pick from this curated selection and you’ll never put a foot wrong. 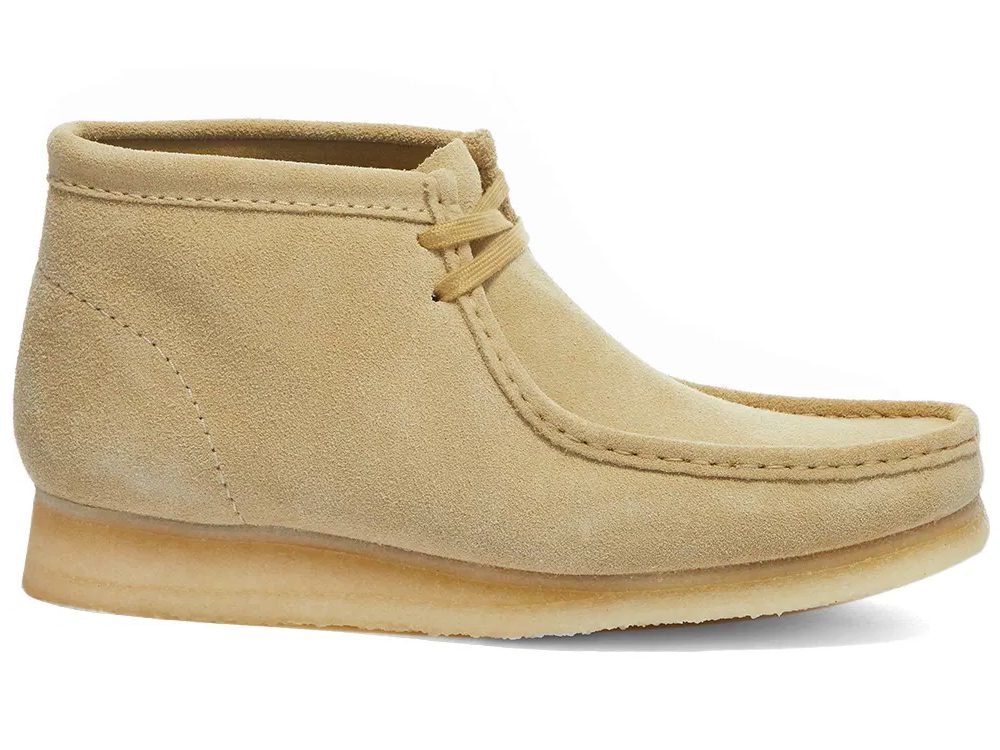 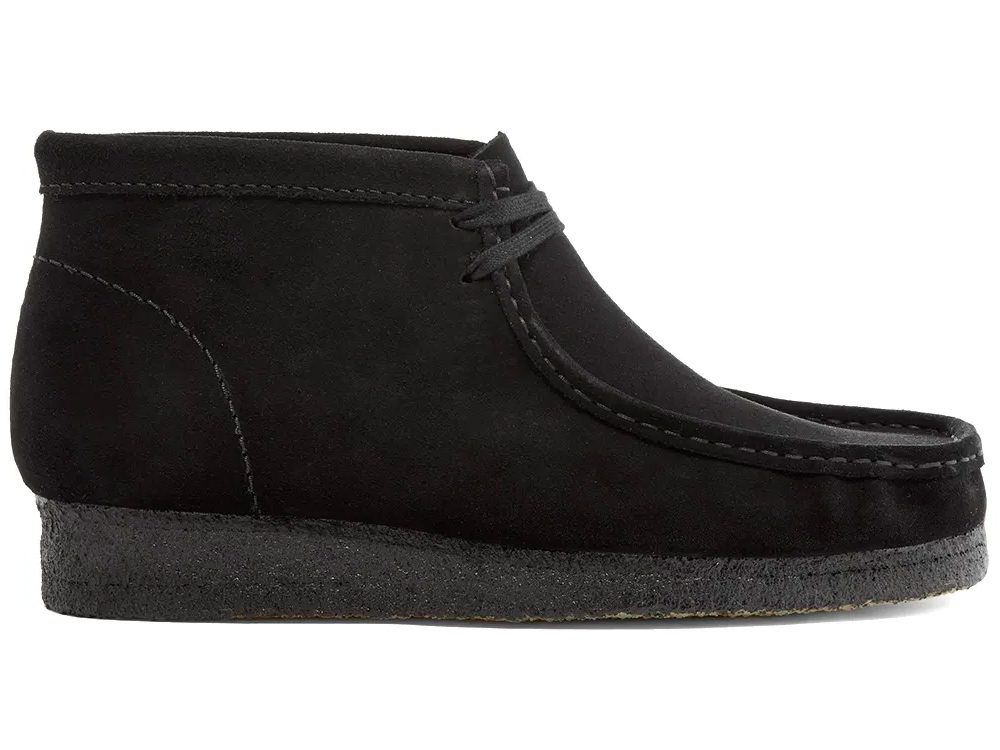 The humble Wallabee might just be the most versatile shoe in existence. It can kick back with casualwear, keep pace with sporty pieces and even rub shoulders with tailoring. It’s also famously comfortable, particularly when made from lovely, soft suede.

As luck would have it, it’s available in mid-top boot form too, which is perfect for wearing with cuffed or cropped trousers, or during the cooler months when the ankles need a little more cover. Go for the iconic maple suede colourway for a casual look, or cola suede or black for something a little smarter. There are plenty of wilder colour options available too, for anyone looking for something a bit more eye-catching. 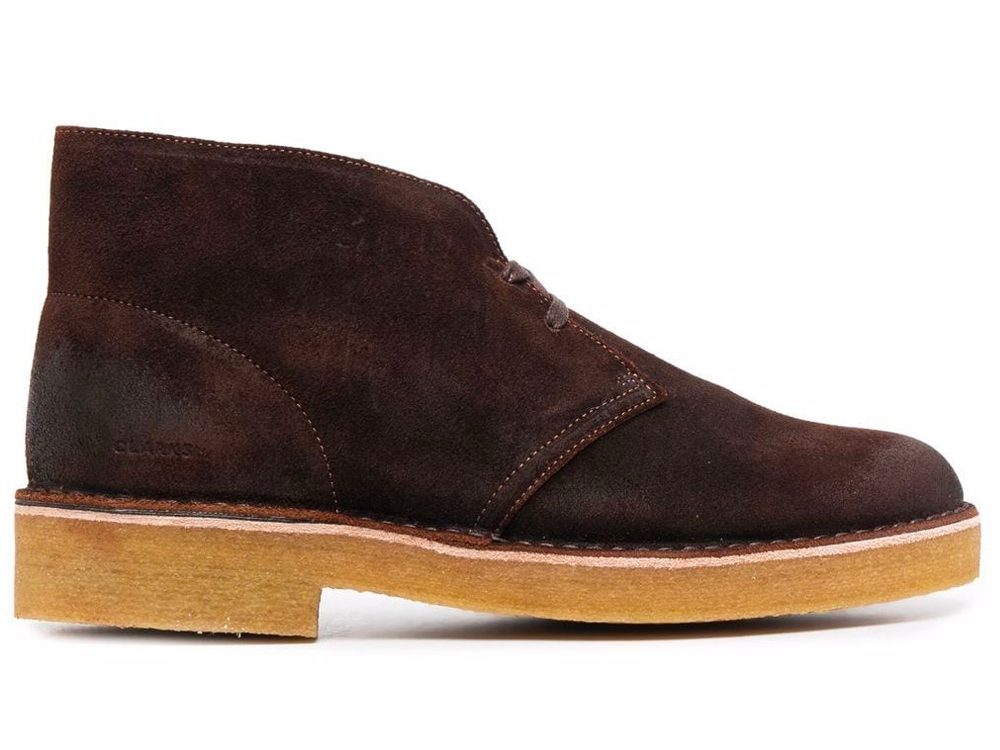 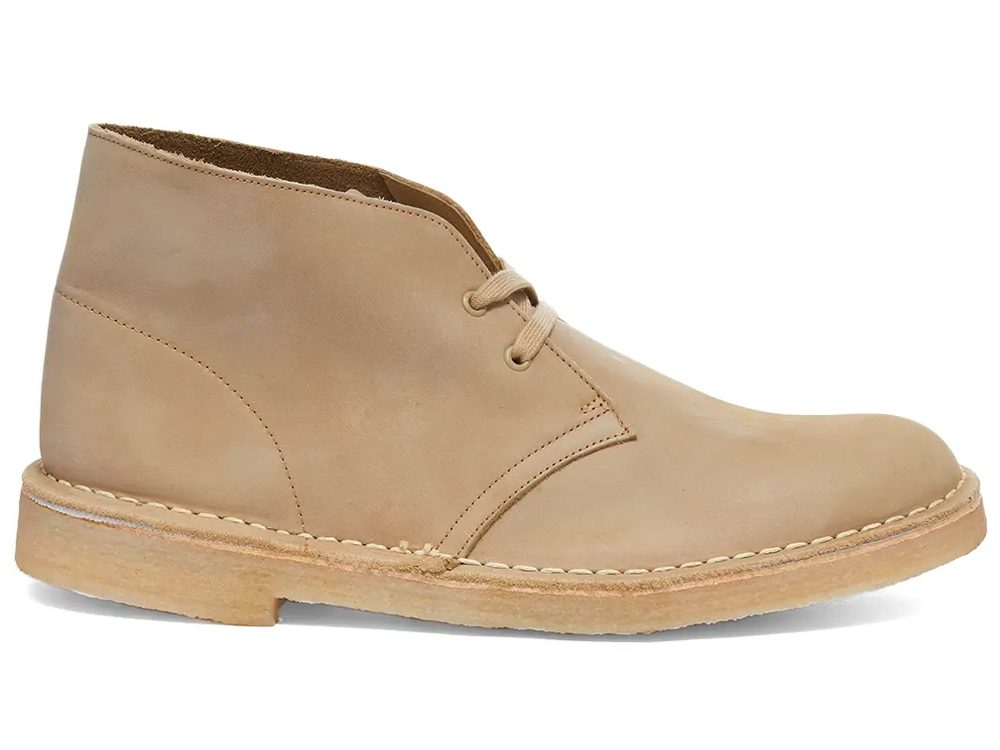 It’s impossible to overstate the significance of the Clarks Desert Boot in modern menswear. Since its launch in 1950, this simple two-eye chukka boot has spurred countless imitations and found its way onto the feet of numerous influential subcultures and style tribes.

We love the original Desert Boot for its simplicity. There’s no fanciness, no frills and the core design has barely changed in over 70 years. And why should it? The uncluttered styling and minimalist design means that it pairs marvellously with almost anything. Throw a pair on with anything from a T-shirt and jeans to a suit, and just watch it blend in beautifully. 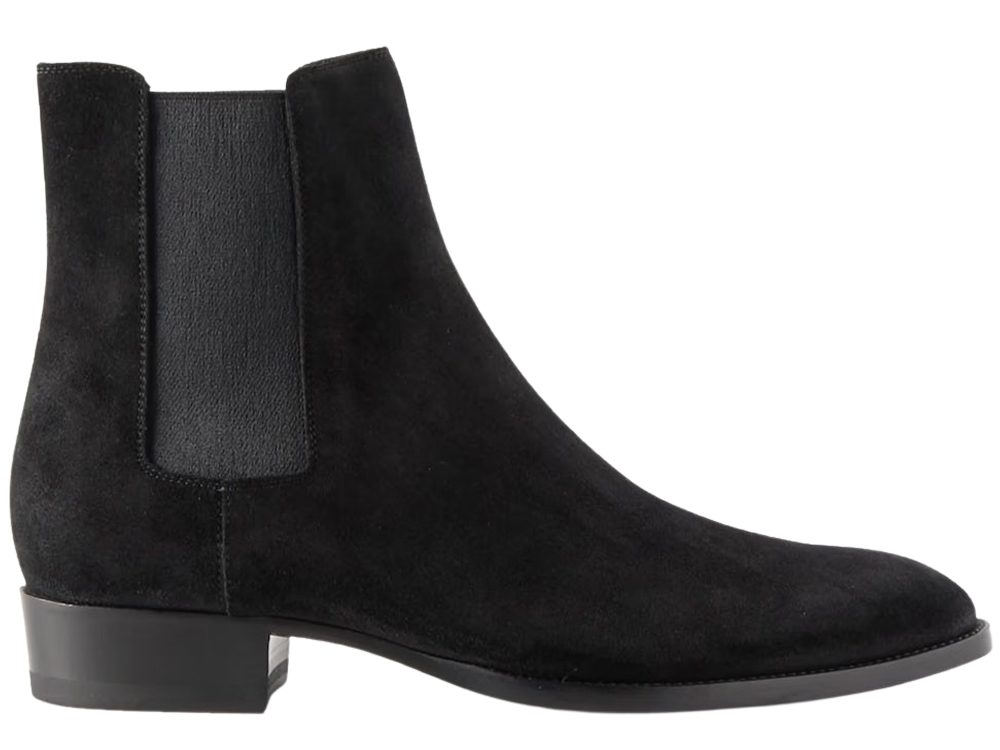 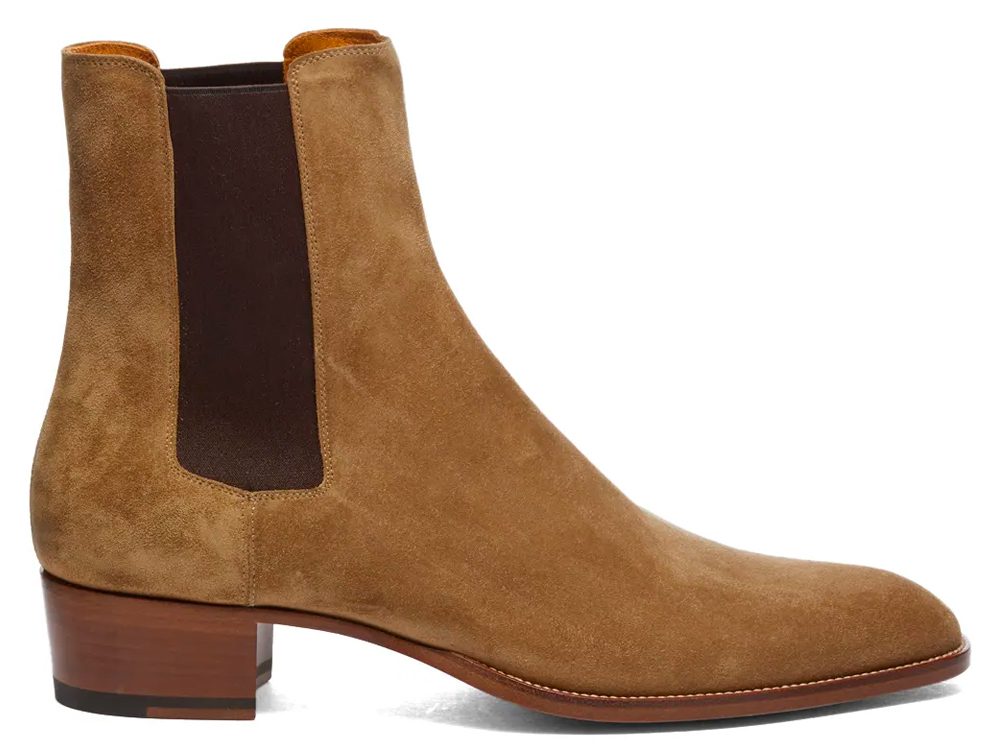 Debuted in Hedi Slimane’s inaugural show for Saint Laurent in 2013, the Wyatt boot is a modern classic that goes heavy on the designer’s signature rock ‘n’ roll aesthetic. It features a substantial heel, a slightly pointed toe and either a gusseted ankle or a zip and harness, depending on the model.

Granted, this is far from the easiest boot to style and not exactly versatile. Still, if your dress sense revolves around slim-fitting denim and leather jackets then it’s one of the best Chelsea boots there is. Not to mention it’s a piece of fashion history from the era that saved the now-thriving French fashion house from the depths of irrelevance. 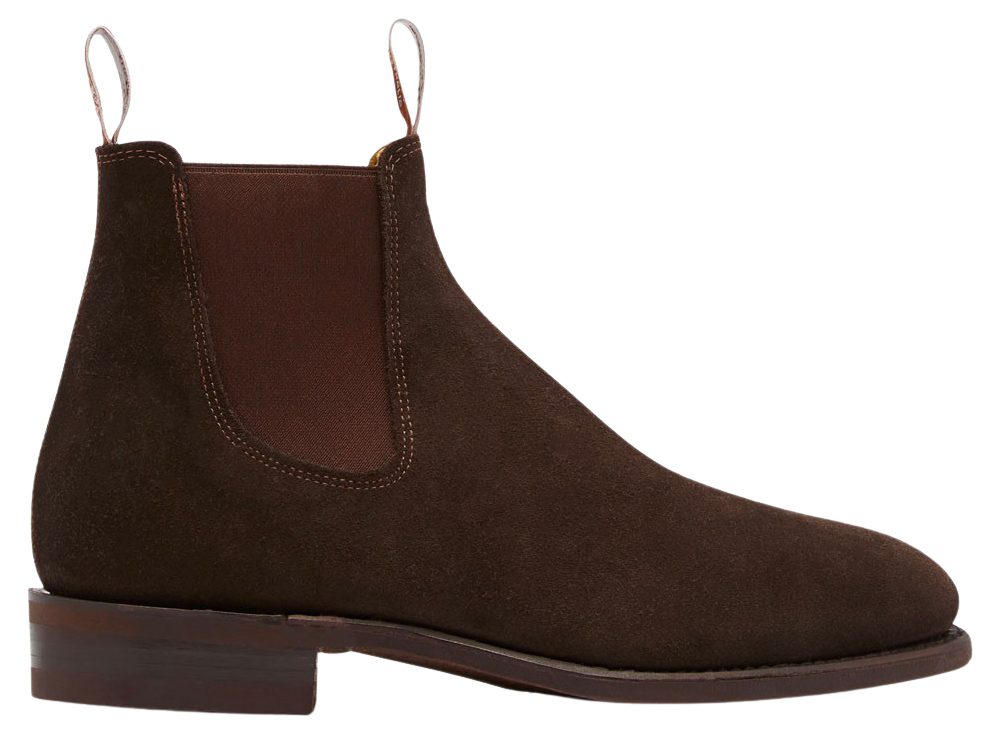 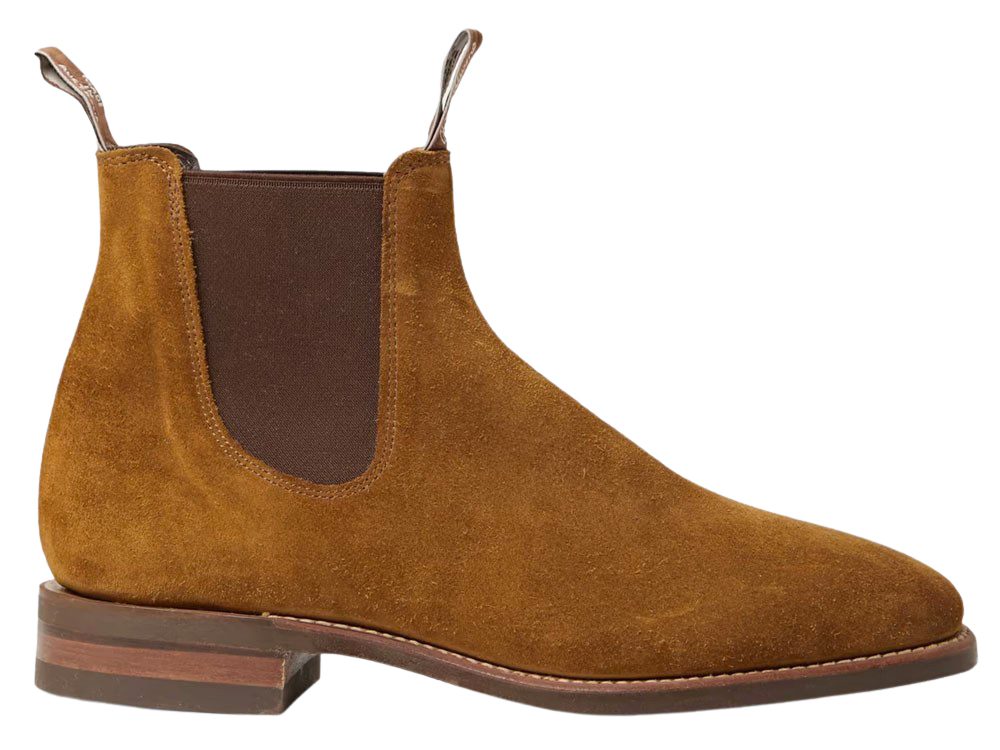 Australia’s R.M. William’s has been making its signature gusseted riding boots for not far off 100 years. They were popular with farmers and workmen during the 20th century, who chose them for their sturdy build and ruggedness. In more recent years, the brand has made a shift into the luxury market, producing high-end footwear for everyone from celebs to Australian politicians.

The Craftsman boot is one of the brand’s oldest models. To this day, it’s still handcrafted in R.M. Williams’ Adelaide workshop using only a single piece of leather. It’s an extremely versatile and timeless piece of footwear, and has a Goodyear-welted sole for added longevity and the option to resole further down the line. 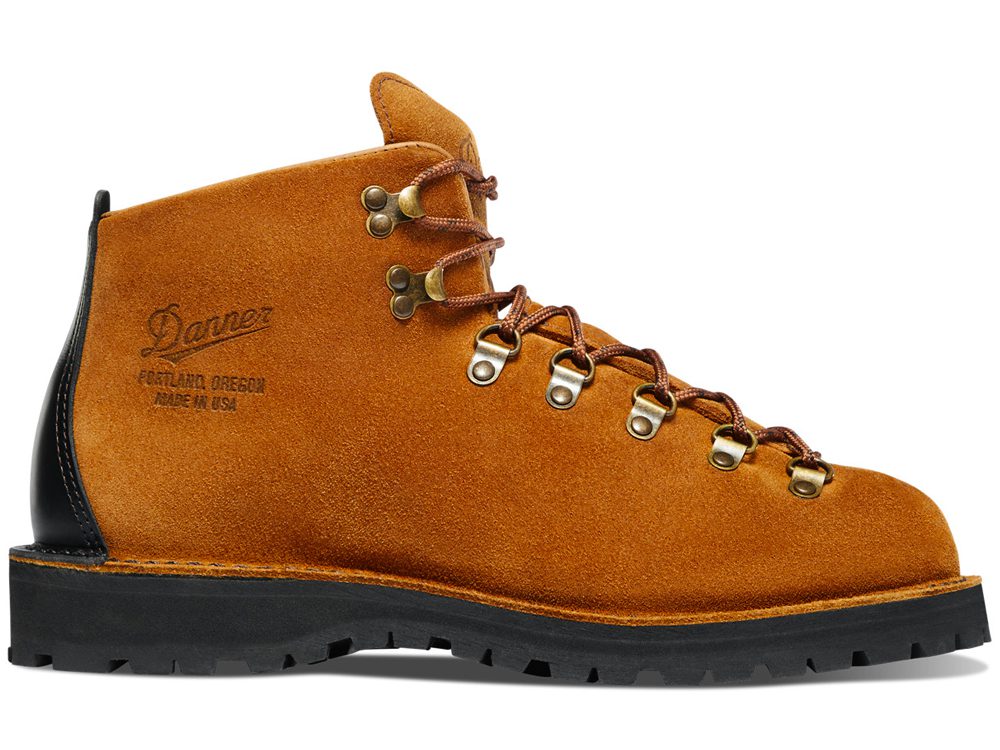 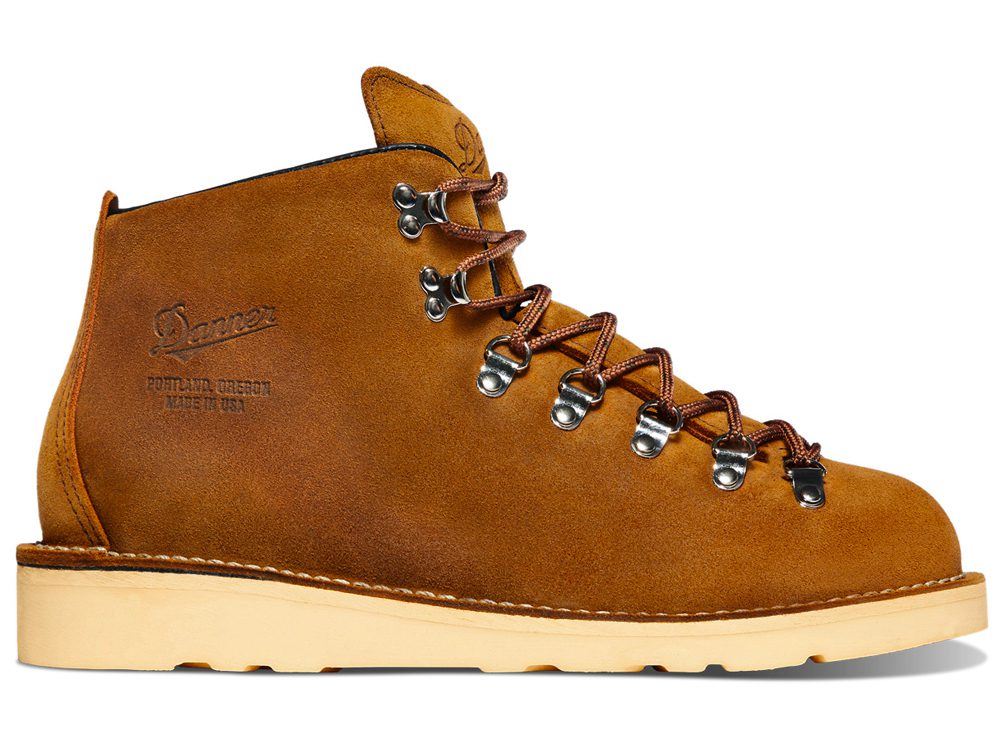 The Mountain Light is Danner’s classic hiking boot and has been in production at the brand’s Portland factory since the 1960s. It’s a great-looking boot regardless of material, but opting for suede over leather definitely gives it a more stylish, less utilitarian edge that works great with winter workwear-inspired pieces like straight-leg jeans, flannel shirts and heavy outerwear. 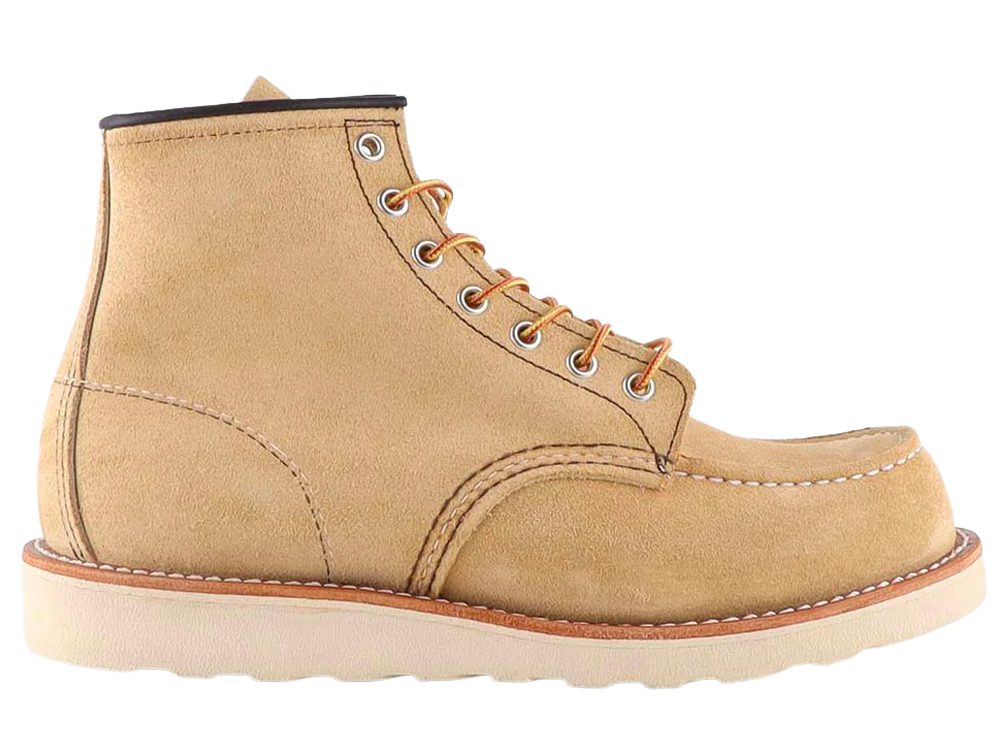 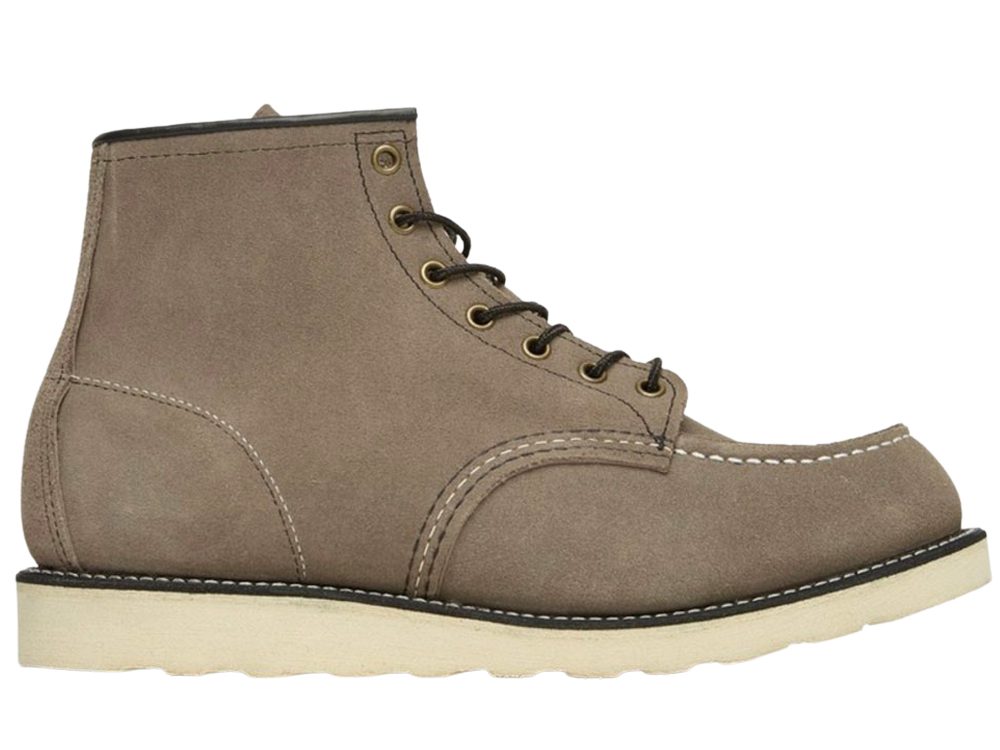 Red Wing’s iconic 6″ boot is one of the definitive workwear pieces. With a white wedge sole and high moccasin toe, it’s a boot built for the workshop that has crossed over seamlessly into the world of men’s style.

The 6″ Moc is most recognisable in Red Wing’s 875 tan leather colourway, but it looks great in beige or olive suede too. It’s a slightly more relaxed alternative that’ll likely outlast you if it’s looked after properly. 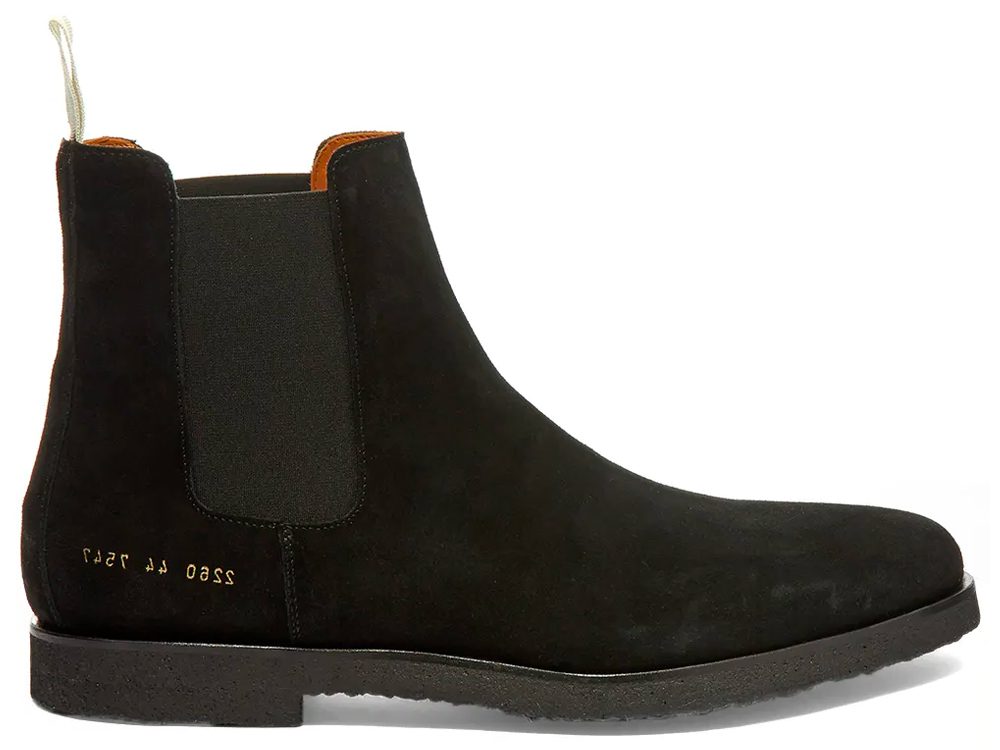 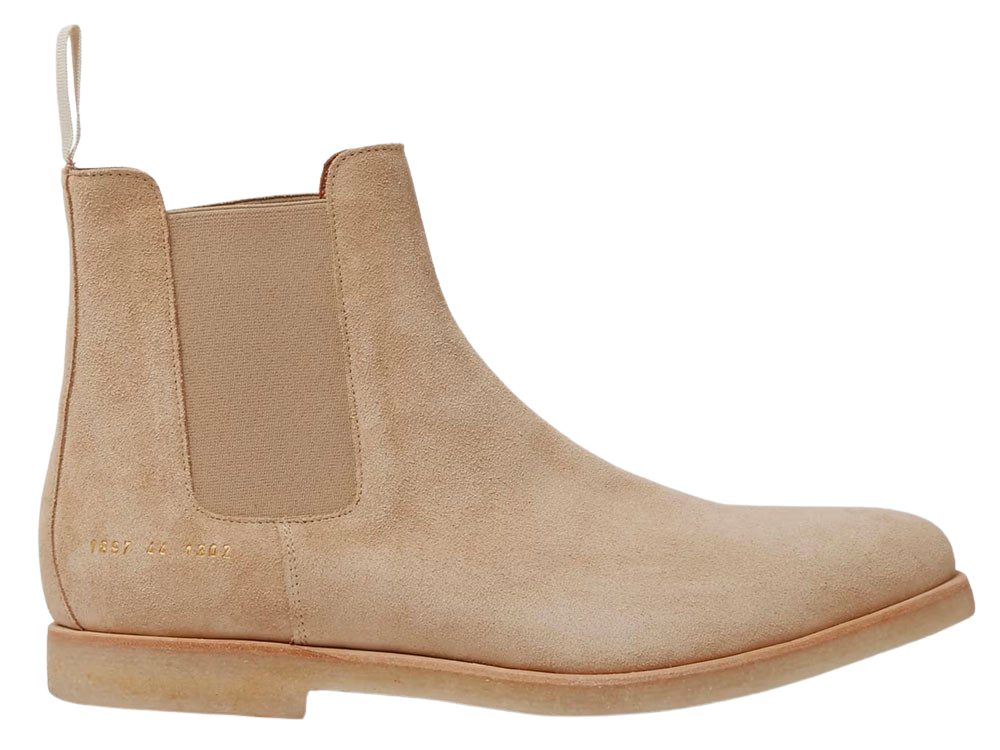 The Achilles Low is Common Projects’ bestselling and most recognisable design, but there’s more to the NYC-based footwear brand than just minimalist kicks. After the success of the upscale leather sneaker, Common Projects expanded its range and this understated Chelsea boot was one of the first styles to be added to the line-up.

It’s a relaxed take on a classic Chelsea, with a crepe rubber sole and soft suede uppers. Like all Common Projects footwear, it’s handmade in Italy and come’s stamped with the brand’s signature gold numbering to the heel. 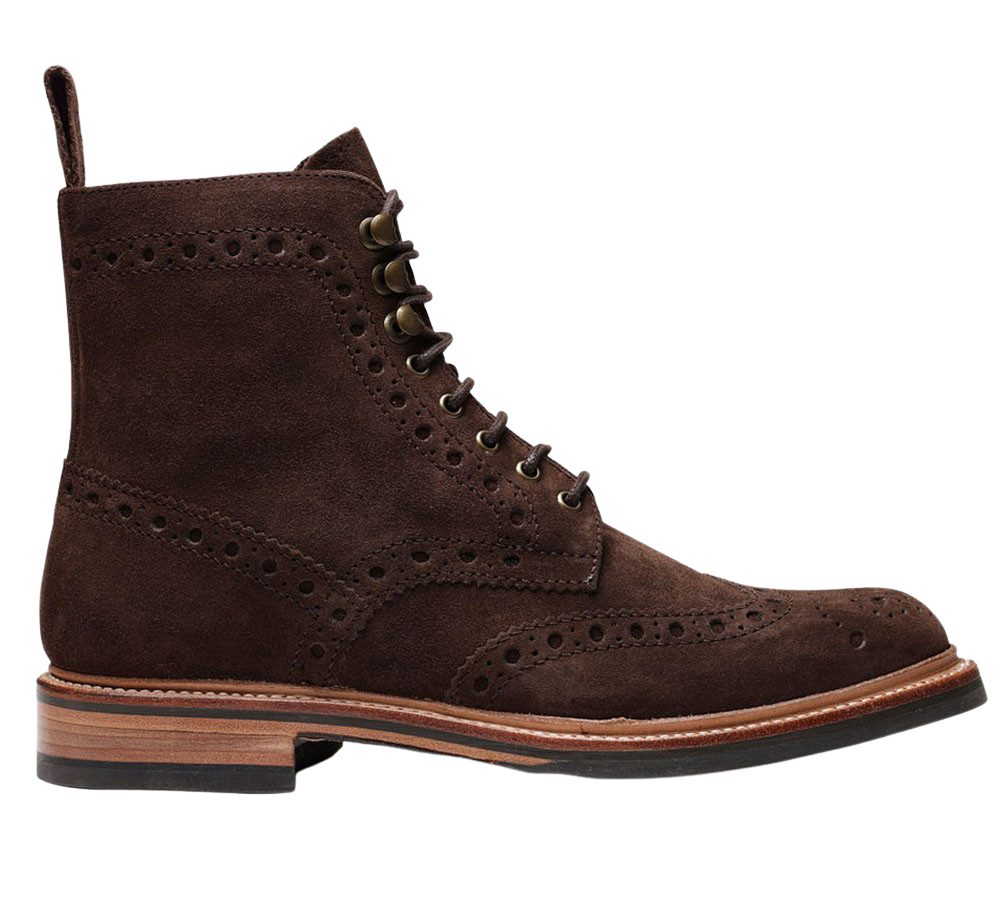 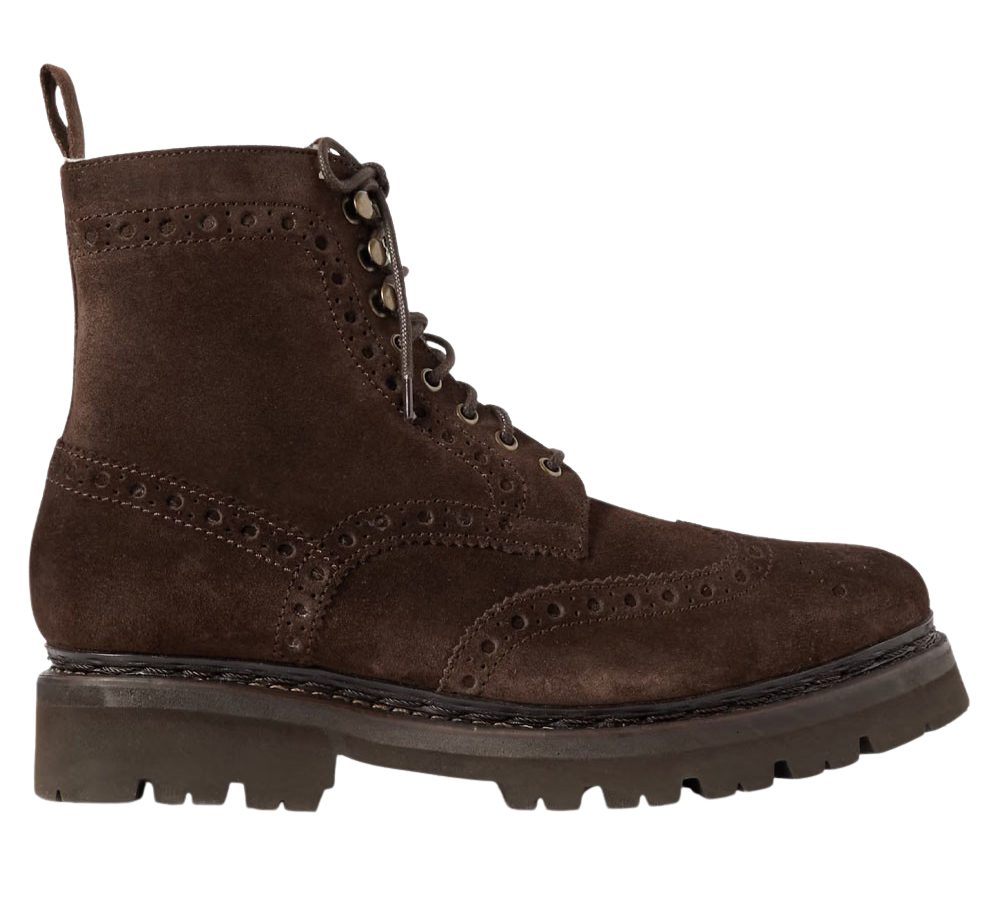 Featuring intricate punch-hole patterns and a calf-grazing cut, this lofty Derby boot is one of the signature styles from Grenson – a Northamptonshire brand famous for its broguing. It’s the high-top version of the historic shoemaker’s Archie brogue, featuring the same handmade construction and Goodyear-welted sole that made its low-top counterpart one of its bestselling shoes.

Wear it with wool trousers, knitwear and soft tailoring for a fall-friendly smart-casual look. 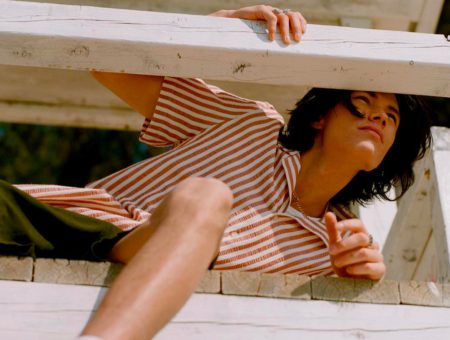