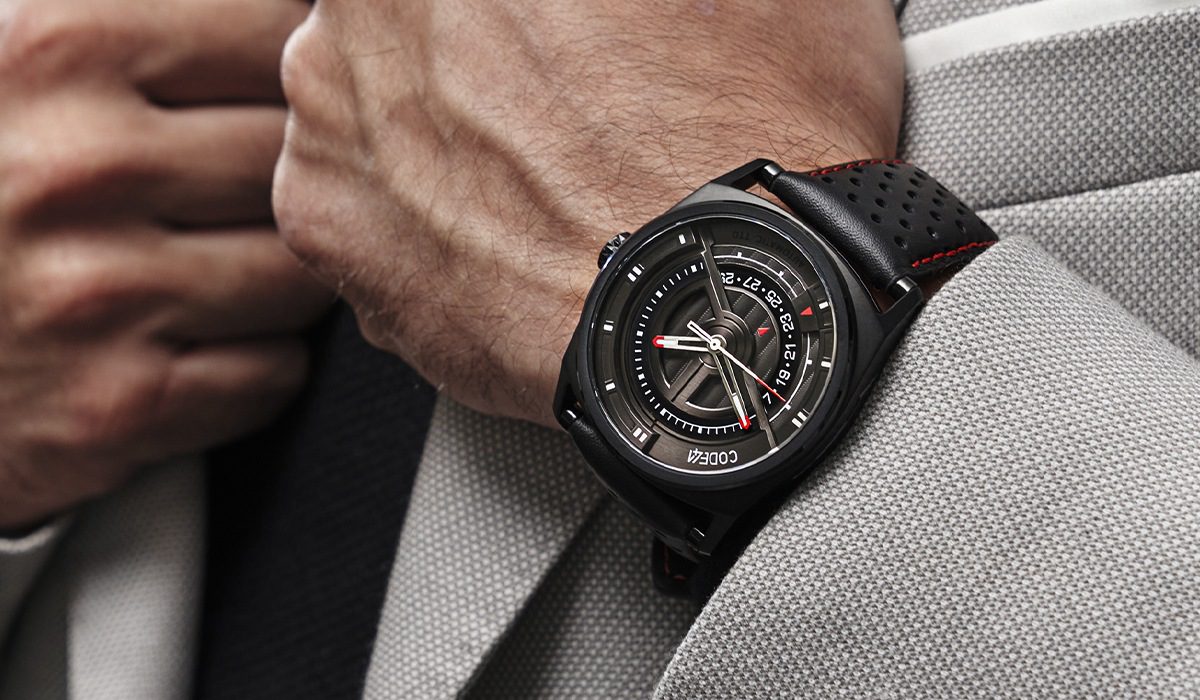 Five years is a long time. Back in the now comparatively halcyon days of 2016 we could go outside, cough without fear of death and had no idea what TikTok was. It was also when a new watch brand by the name CODE41 burst onto the Swiss watch scene, with their disruptive, transparent approach to watchmaking.

Back then their first watch was a strange singularity in the watch world; an odd, off-kilter approach paired with an eye-catching design like nothing else out there. Hence the name ANOMALY.

While everything else seems to have gotten worse over the years, one thing hasn’t: the ANOMALY is back with a new lease of life with its new EVOLUTION.

The ANOMALY EVOLUTION is, put simply, the best elements of the previous editions of the watch combined into one piece. From the ANOMALY-01 it takes the cut-out, multi-layered dial revealing a textured finish underneath, as well as a larger, full-dial version of the watch’s wheel date indicator, complete with red highlights.

On the other hand, it’s dropped the more technical-looking open elements of the movement, a core characteristic of the 1, in favour of the more streamlined style of the ANOMALY 2. Otherwise, it still has the faceted crown and short lugs of previous editions, as well as the same solid cushion case, albeit in a shiny new size option.

41.5mm isn’t a huge watch by any stretch, but it is large enough to put some wearers off. Especially now retro is in vogue, sizes are coming down across the field. Just take a look at the latest 36mm Rolex Explorer. CODE41 hasn’t gone quite that extreme – it wouldn’t suit the watch at all – but have allowed a nod to more svelte wrists with a new 38mm version of the ANOMALY.

It’s All In The Detail, And Movement

There are other changes you won’t really notice between versions, but it’s good to know they’re there. 100m water resistance, improved lume across the dial and a strengthened crown make it that bit more hardwearing; a reduction in thickness of 1.5mm makes it more comfortable on the wrist and the ANOMALY EVOLUTION is equipped with a shiny new movement besides.

That movement is a distinct uptick from previous models, upgrading from the standard Sellita SW200-1, a mainstay of microbrands everywhere, in favour of the Elabore version. The new movement is better in every way, upping accuracy, reliability and shock absorption.

Despite all these improvements, the ANOMALY EVOLUTION still comes in with a near impossible price tag of £785 for the early bird Creator Edition. It’s a seriously good price. If you want to know why, just check out CODE41’s breakdown of their casts. When they talk about transparency, they mean it.

The ANOMALY EVOLUTION is available in a few different colourways, with blue, black or anthracite PVD, raw silver steel and green, red or plain old white highlights. There are just as many options for straps and bracelets, too.

Sure, many of us have been pretty stagnant over the last year, but not only has CODE41 survived through these tough times, they’ve thrived, and the ANOMALY EVOLUTION is proof of just how far they’ve come. The only question is where the ground-breaking brand will head next.

A paid partnership with CODE41 – words and opinion are Ape’s own.