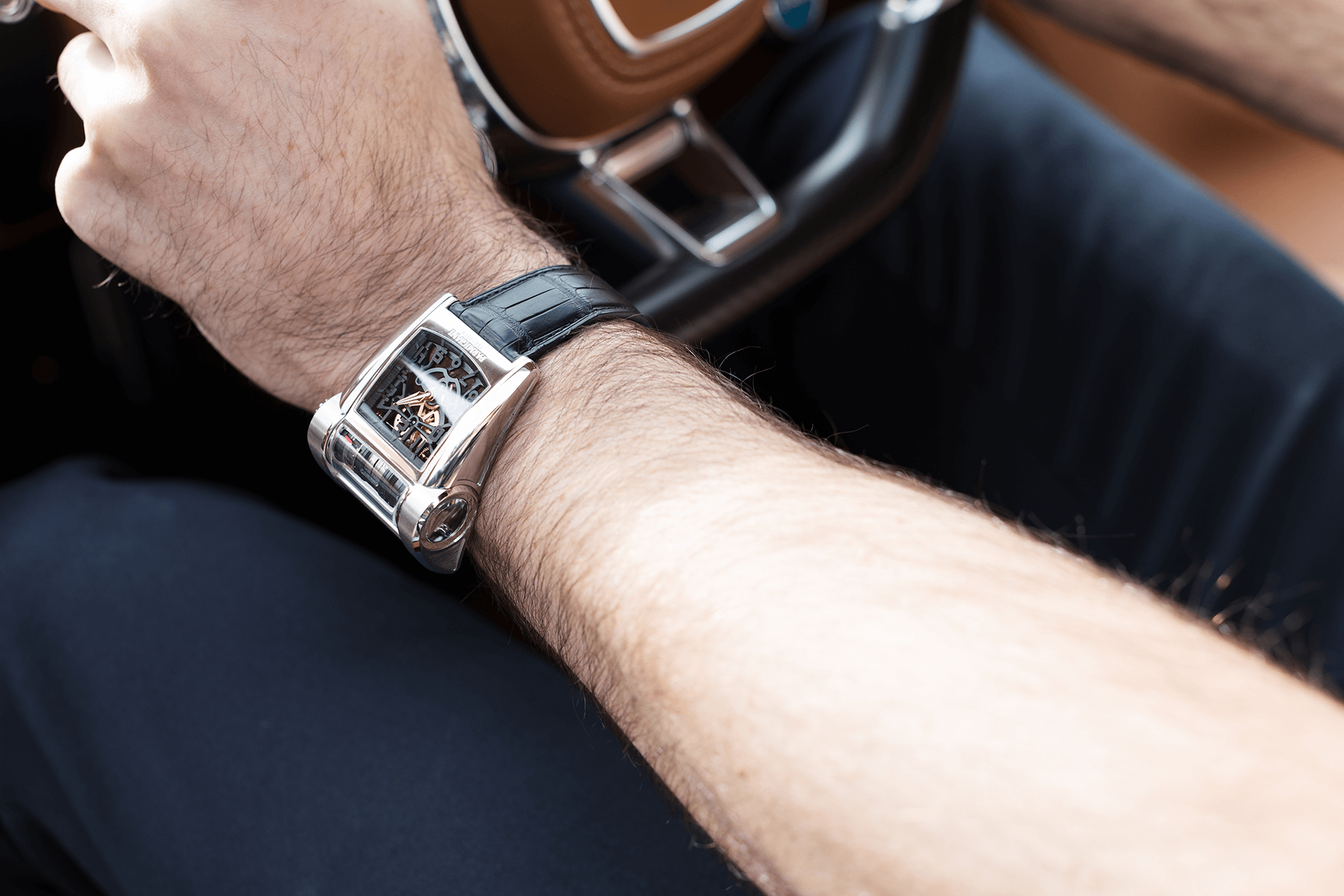 Incredible power, reliability and performance- words often associated with a Bugatti Chiron, the world’s most powerful and quickest car, and the latest creation from the luxury car manufacturer. The subsequent challenge- conveying this almighty feat of engineering into a watch – capturing the power of an 8-litre, 1500-hp, quad-turbocharged W16 monster into a timepiece. I headed to Molsheim in north-eastern France, home of Bugatti, to find out how the geniuses of Swiss watch brand Parmigiani Fleurier achieved it.

We were guests of Michel Parmigiani, President of the eponymous watch company Parmigiani Fleurier, and the man tasked with orchestrating the creation of such a timepiece. This isn’t Parmigiani Fleurier’s first collaboration with Bugatti, the two firms have partnered since 2004 producing the ludicrously handsome Aerolithe, Super Sport and Type 370 watches. 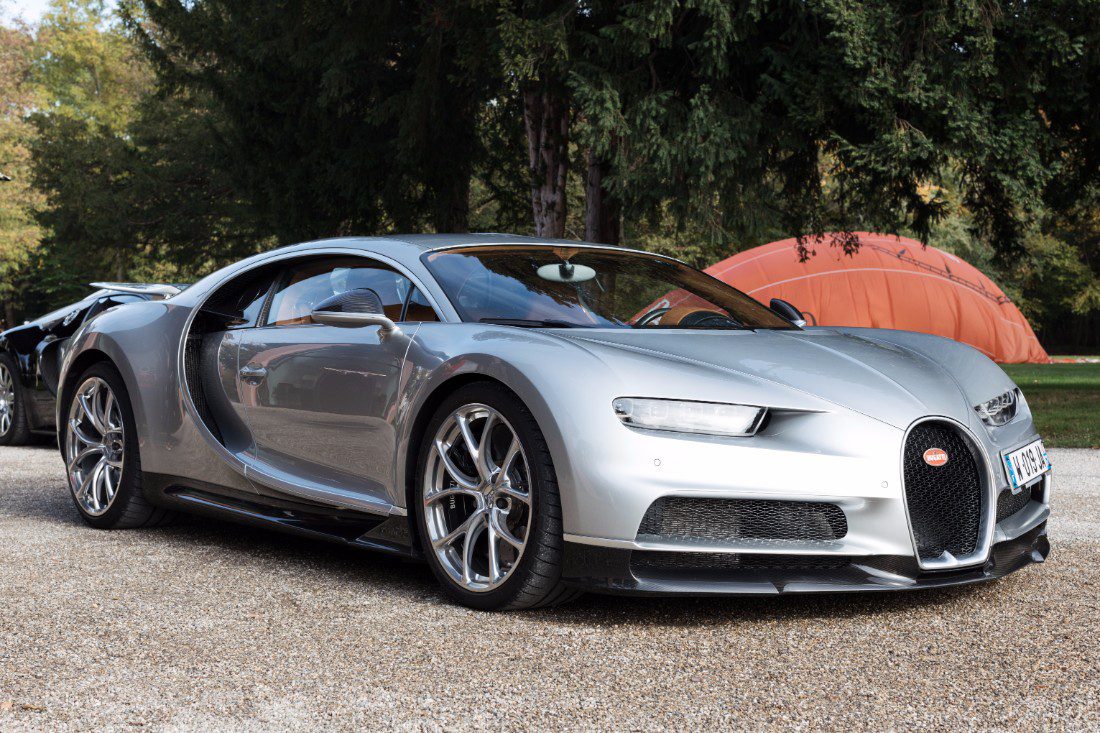 The car-watch historical crossover is longstanding across many a brand- it makes total sense with both man made, technical machines wowing with their intricacies, performance and style. However, it doesn’t get more skilled and ‘top end’ than the Bugatti Chiron and similarly, Parmigiani Fleurier who’s pursuit of excellence is equally impressive. 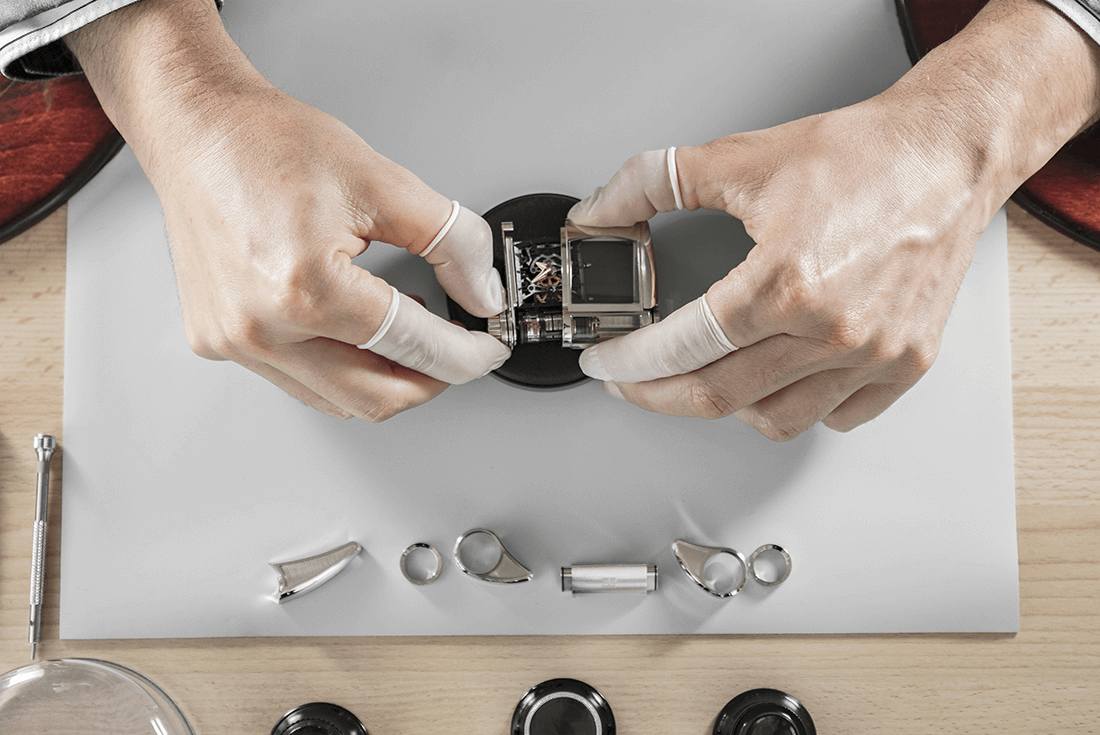 The creation which I witnessed the unveiling of last week at Bugatti’s impressive headquarters is the Parmigiani Fleurier Bugatti Type 390 Watch, ‘fuelled’ by its unique, patented calibre PF390 crafted with a flying tourbillon and housed in a cylinder boasting an 80-hour power reserve. The power of a Bugatti Chiron in a wristwatch.

The Bugatti Chiron in Watch Form ‘The Details’

This brand new planetary gear train uses the smallest ball bearing in the world: just 1.28 mm in diameter for 12 ceramic balls measuring 0.2 mm in diameter. The ball bearings used on the Bugatti Chiron may be very different in terms of size, but they are very similar in terms of technology! Each of the three planetary gear trains features three bearings, making a total of nine ball bearings in all. Another key point is the fact that the assembly requires no lubrication: a significant advantage in terms of reliability and maintenance.

Moreover, the manufacturers have designed a rod clamp- by replacing four common components on an ordinary watch movement (setting lever, setting lever jumper, yoke and yoke spring on the winding mechanism)- to perform the dual function of winding the two barrels and setting the time. This optimised development helps boost the performance of the mechanism. Using a single component instead of four makes it simpler and more reliable, thereby reducing maintenance. Exactly what we look for in any technological advance. This rod clamp mechanism is used to wind the two connected barrels (energy reservoirs), which are series-mounted coaxially.

The triangular coupling used for the Calibre PF390 enables self-centring of the two barrels, while their series-type coupling guarantees a constant transfer of energy- just like the fuel pressure regulator on the Chiron – and rate regularity for optimal timekeeping. The energy is then transferred via the planetary gear trains to the flying tourbillon regulator, at the end of the transmission chain which oscillates at a frequency of 4 Hz (28,800 vibrations/hour). The variable-inertia balance and the overcoil are made at Atokalpa, one of Parmigiani Fleurier’s manufactures. Just like the Bugatti Chiron, the assembly offers an excellent size-power-weight ratio and remarkable rate stability. Another innovation of this Calibre PF390 is a torque limiter which protects the movement during winding by preventing any accidental breakage with a free return function.

Also inspired by the components used for the Bugatti Chiron, the PF390 movement is equipped with a bevel gear differential to show the power reserve. By designing a display tube (made from sapphire) which is peripheral to the movement, the Parmigiani Fleurier manufacture developed this unique construction in which a power-reserve train wheel drives a fixed toothed ring gear inside the tube. This taper pivots on two guide rings thereby enabling the power reserve to be read on the tube, by means of a fixed hand.

The Calibre PF390 – this cylindrical “engine” – benefits from another advance developed by the Parmigiani Fleurier manufacture: mounting the bridges coaxially guarantees absolute precision assembly. Such precision becomes all the more essential on the two bridges and main plates usually used in mechanical watches; the calibre PF390 is composed of seven layers featuring a total of 302 components. The blackened bridges accentuate the high-tech nature of the movement and its modular construction. 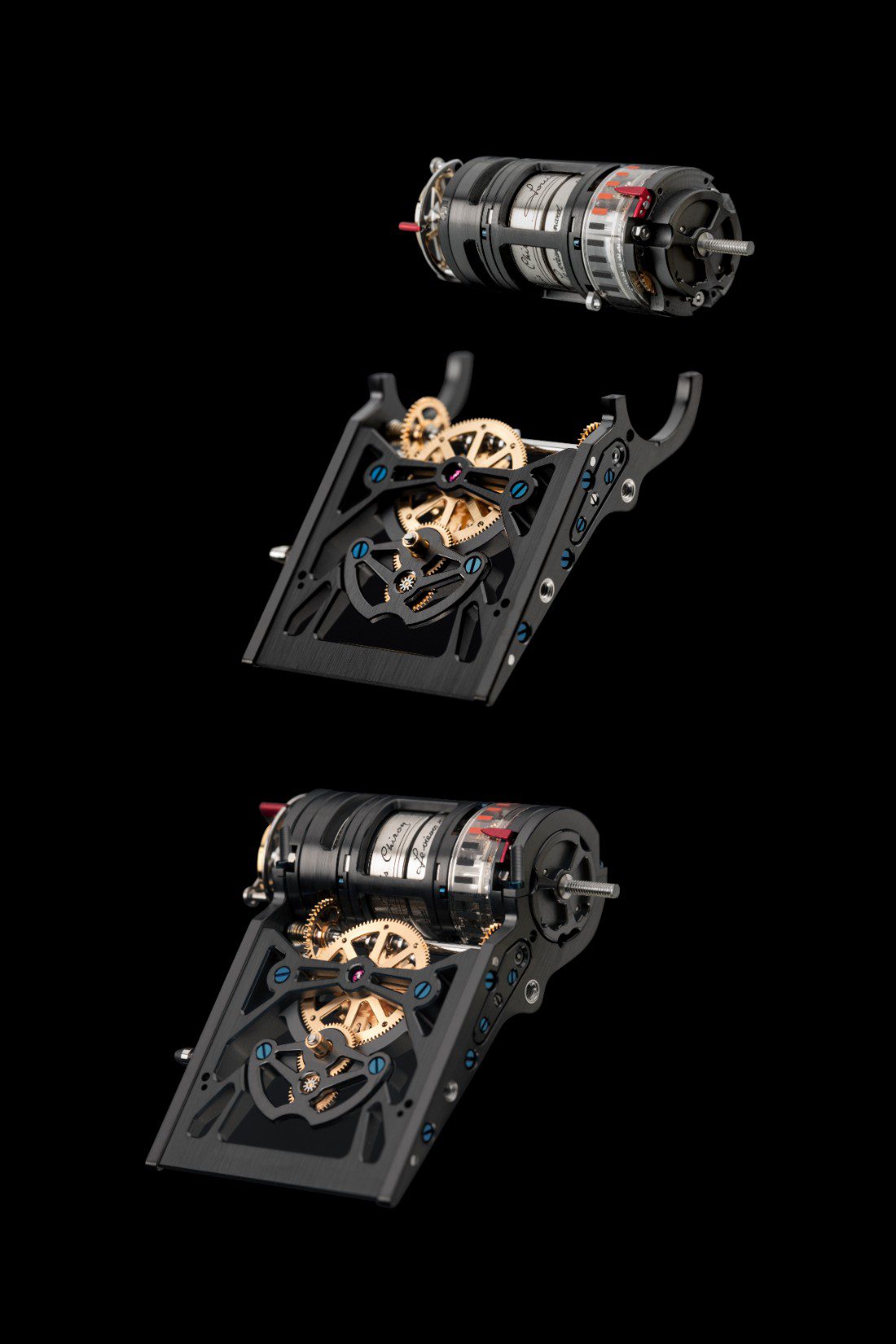 In terms of the architecture of the movement, the cylindrical engine block is fixed to the display module using a “conrod” type principle – inspired by the piston mounting for a car engine – secured by a component shaped just like a conrod cap.

True to Bugatti’s motto “Form Follows Performance”, another distinctive feature of the calibre on the Bugatti Type 390 is the use of a worm screw to transfer information from the train wheel to the dial. This worm screw is also used for the transfer from the engine cylinder to the dial displays, by twice moving through a 90° angle. This marks a first in watchmaking. This angle transmission function serves three aims: it enables a 90º transfer of energy, out of the closed cylindrical circuit and into the display on the dial. The central planetary gear train is responsible for this transmission to the dial. Moreover, this worm screw eliminates all the problems of indenting (caused by the hand sliding on the spindle) often found in ordinary watches. Finally, a spring at one end of the worm screw ensures regularity and comfort when setting the time on the movement via the crown.

Despite innovative construction techniques there is still a traditional touch applied to all timepieces. This is seriously high-tech craftsmanship we are talking about: the ultimate in precision execution matched with the rare dexterity of a watchmaking expert. In fact, the Calibre PF390 on this futuristic watch boasts exceptional finishes across all its components. Enclosed in a titanium cage designed to control the forces at play without any deformation, the two barrels are engraved – one with the signature of Louis Chiron, the other with the inscription “le vieux renard” (the old fox), in reference to the nickname of this legendary racing driver.

In light of the watch’s innovative features and the unique solutions it offers, this Calibre PF390 heralds a new era in Parmigiani Fleurier’s Bugatti collection. In fact, it has been designed and created to become the platform for development of future Bugatti models.

Continuing in the sporting spirit of the Bugatti Chiron, the black open-worked dial makes this a lightweight yet high-performance timepiece. The luminescent appliqué indices and hands create a stark contrast to ensure optimal legibility. Thanks to the 60-second tourbillon, the seconds can be read through the magnifying effect of the sapphire crystal at the end of the cylinder.

Inspired by the fluid curves of the Bugatti Chiron, the case is also created from gold, (white gold or rose gold, depending on the version), and engraved on the back with the inscription “EDITION LIMITEE 10 PIECES” (10-piece limited edition). This case was created by Les Artisans Boîtiers – one of Parmigiani Fleurier’s manufacture divisions; constructed around the cylindrical structure and water resistant to 3 ATM, it stands out thanks to its ability to pivot 12° around its drive shaft (patent pending), to ensure perfect ergonomics around any wrist. The remarkable technical sophistication of the timepiece can be admired via the large openings topped with sapphire crystal, which is extremely complex to create. Via the top and the end of the tubular structure, the sapphire crystal thus invites us to dive deep into the heart of the timepiece’s incredibly complex mechanisms (the “engine” and flying tourbillon), while the openings over and under the dial reveal the watch’s many gears and enable the time to be read. The alligator leather strap is signed by Hermès and is fitted with a gold folding buckle.

The Parmigiani Fleurier Bugatti Type 390 Watch is not only a masterpiece of technical ability, as is the Bugatti Chiron but a seriously handsome timepiece, as rare and exclusive as the car its inspired by. Who wouldn’t want this handsome ‘machine’ on their wrist.

With the Bugatti Type 390, Parmigiani Fleurier wanted to equip a timepiece with all the technology and the power evocative of the Bugatti Chiron, the most impressive supercar on the market today. During the four years that it took to develop this remarkable timepiece, Parmigiani Fleurier clearly made no compromises. When all is said and done, it is clear that the Bugatti Type 390 is far more than a watch stamped with a car marque logo; it is the Bugatti Chiron reborn in watch form and an equally impressive achievement.