We all have pretty different tastes in watches, whether that’s classically-minded gold numbers with stripped-back dials or something rugged more suited to the great outdoors. Tastes aside though, one of the most important aspects of any wristwear, especially with so many options out there, is value – and no brand offers more than Hamilton.

Originally an American watchmaker, the Switzerland-based Hamilton of today still echoes its Stateside roots throughout its collection, running the gamut from stripped-back field watches built to survive military operations to the world’s first battery-powered watch, the Ventura.

You’ll have seen them plenty on the big screen too. They’re pretty much the de facto Hollywood watchmaker, with prime roles in Men in Black, Interstellar and 2001: A Space Odyssey. Most recently they starred in Christopher Nolan’s latest, Tenet. Those cool, oversized, blacked-out stopwatches in the latter half of the film? Hamilton.

A Timepiece For Every Gentleman

Where Hamilton really comes into their own is value for money. Between their solid build quality, impressive range of classic designs and in-house movements the equal of any ETA-based calibre out there, they’re a no-brainer wristwear option.

Given their extensive catalogue, you’ll also find something to suit any taste. No matter whether you’re buying as a last-minute Christmas present or a well-deserve addition to your own collection, here are some fail-safe Hamilton models for every type of man. 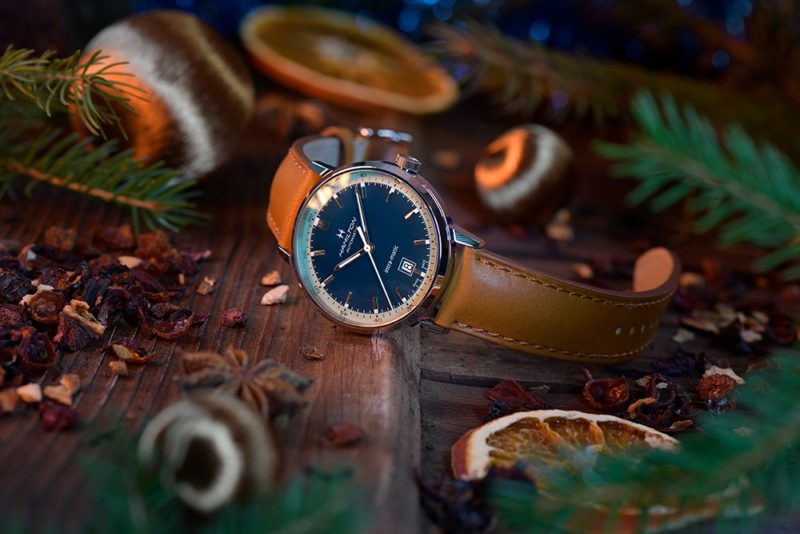 Everyone needs that one watch that can tackle anything. The kind of timepiece that’s as at home in a bar as in the boardroom; tasteful without being showy, practical without being utilitarian. If that comes with a healthy dose of retro charm then all the better.

The Intra-Matic Auto (ref. H38425540) has all that and more. The 40mm diameter will suit almost any wrist and fit nicely under a shirt sleeve, without looking as dainty and delicate as a proper vintage watch. The two-tone dial is pure 1960s class with its white outer minute track and contrasting main dial and, let’s be honest, blue goes with everything.

The movement’s just as versatile. Made using a handful of Nivachron components – a high-tech, anti-magnetic alloy that helps improve reliability over other movements – it keeps things precise on a daily basis. Well, more than three-daily basis actually; the automatic movement comes with an incredibly impressive 80-hour power reserve. At this price point that’s bordering absurd.

We’d hesitate to say this watch can do anything, but if there’s something it can’t do we’ve not found it yet.

For The Would-Be Racer 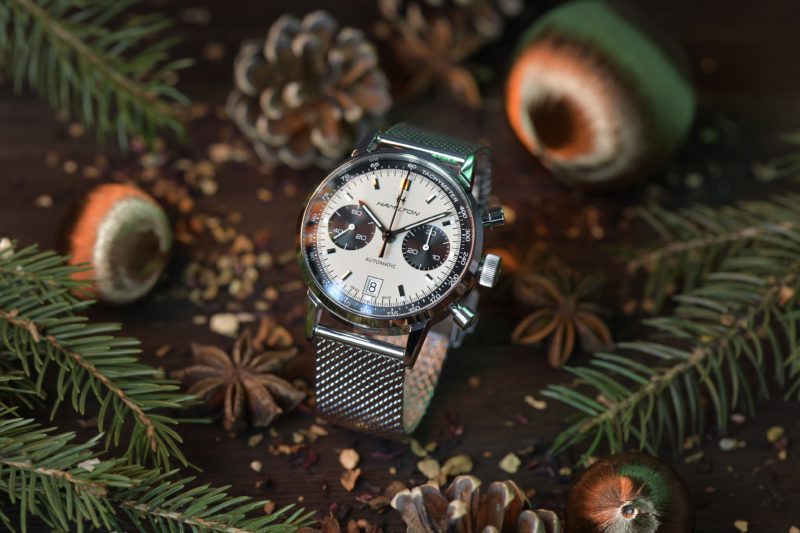 Based off a design from 1968, the Intra-Matic Auto Chrono (ref. H38416111) is essentially a modern take on a classic racing watch. It has everything a proper heritage chronograph needs, from the mushroom pushers to hammer home that retro silhouette to the high-contrast tachymeter scale around the edge of the dial, allowing you to judge the average speed of cars in a race.

Where this particular watch is a cut above the rest though is the much-loved Panda dial, with black contrasting bi-compax (two) counters against a white dial. The combination’s essentially short-hand for 1960s trackside timers and, paired with nicely chunky indexes, is pure retro racing bliss.

At 40mm across, it’s slightly larger than most of the vintage-inspired chronos out there, which is no bad thing. It keeps the dial readable and the watch suitable for all wrist sizes.

Powered Hamilton’s own H-31 automatic movement with an impressive 60-hour power reserve, it’ll have you re-watching Grand Prix religiously over the festive break.

For The Classic Aviator 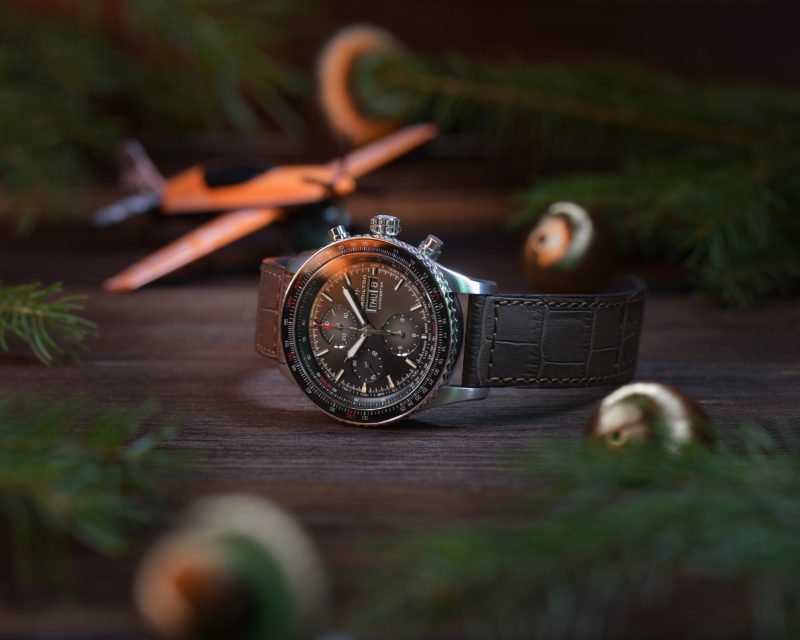 The Khaki Aviation Converter Auto Chrono (ref. H76726530) features a slide-rule mechanical flight calculator – a professional tool that pilots and watch connoisseurs alike will appreciate. The bezel is used to convert feet to metres and miles to kilometres, both pretty useful if your mental arithmetic is failing, even outside of the cockpit.

At 44mm it’s a relatively large watch, especially by Hamilton standards, which is to be expected in an aviation timepiece, where legibility – and therefore a roomy dial – is the be-all and end-all. Paired with an oversized crown and bezel designed for use with flight gloves, it has everything a proper aviator needs.

The movement inside is an advanced automatic calibre that uses a hairspring – the most delicate yet arguably most vital part of the watch – made of anti-magnetic silicon. For everyday wear, that means you don’t need to worry quite as much about risking your fine mechanical timepiece near loudspeakers, though we wouldn’t suggest throwing it in an MRI machine.

It’s a useful, timelessly technical timepiece whether you’re 30,000 feet up or trying to convert imperial to metric during a festive quiz night.

For The Modern Man 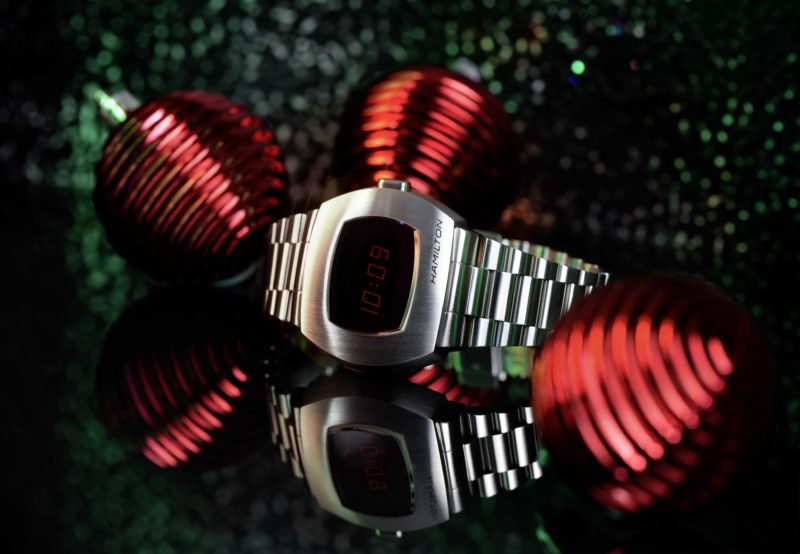 Back in 1970, Hamilton announced something that would change horology forever: the first digital wristwatch. It was like nothing the world had ever seen – and had a price tag to match, costing the same as a car. Today it’s still a cult classic – if you can even find one of the just 400 built.

Half a century on and the revamped modern version of the Pulsar, the PSR (ref. H52414130), isn’t quite as pricey; you wouldn’t get much more than a beaten up Fiesta with three good wheels for the money. A good part of that is because it’s swapped the original’s solid gold with far more practical (and far, far more lightweight) stainless steel. What it does share though are the overall case shape, a masterpiece of space-age futurism, and the display, which lights up at the press of a button.

Powered by a quartz movement and measuring in at a surprisingly-wearable 40.8mm, no other digital watch comes close to the OG LED. 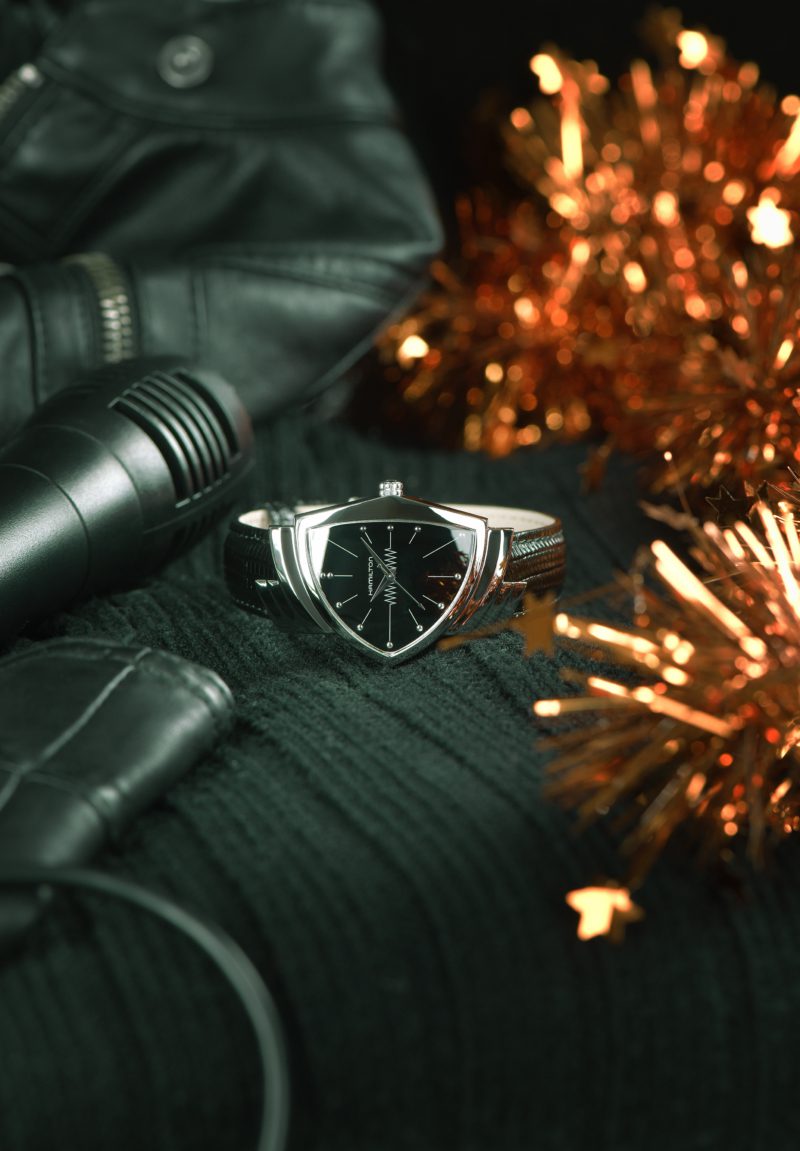 Before the Pulsar there was the Ventura, the world’s first battery-powered watch. Not that it really needed that technological first to stand out. The eye-catching design was adopted by none-other than Elvis Presley himself and, more recently, it’s futuristic looks saw it as a vital part of the kit for the Men in Black.

The mid-century modern look has aged far better than most tech-forward pieces from the 1950s and 1960s and remains one of Hamilton’s most instantly-recognisable icons. Sure, it’s a bit out-there, but if you’re after something a bit quirky then the Ventura (ref. H24411732) is an easy way to up your wristwear credentials. It’ll stand out, that’s for sure.

Now, it is available in an automatic version, too. Honestly though, we’d advise sticking to the quartz. Given that the Ventura was the first battery-powered watch, opting for an automatic in this updated reissue just seems… wrong. Plus it’s the one quartz piece you can wear without disapproving grumbles from watch snobs the world over. That alone’s worth the (delightfully slight) investment. 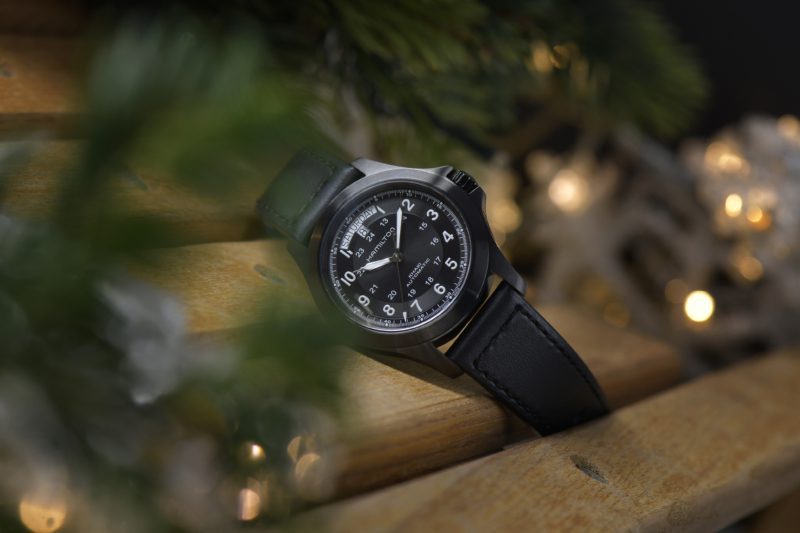 Hamilton has, historically, gone hand-in-hand with the military, ever since they began providing service watches to the US armed forces back in 1942. And in the modern Hamilton, the ancestors of those watches are firmly entrenched in the Khaki Field collection.

The Khaki Field King (ref. H64465733) though, is not a heritage military watch. With it’s blacked out PVD-coated case (a thin layer of high-density material) and rugged field aesthetic the case is more suited to modern spec ops than Saving Private Ryan. That coating also adds an extra layer of durability to the stainless steel case. After all, this is a watch built to survive.

Still, while the case may be militaristic, the functionality is most definitely civilian, with day and date indicators at 12 o’clock. It’s an unusual combination but one that lifts it above the purely practical.

Otherwise, the Khaki Field King’s stealth style more than lives up to its name, especially when equipped with the robust H-40 in-house automatic movement with its 40-hour power reserve. When adventure calls, this is a watch that’s more than ready to answer.

In partnership with Hamilton – words and opinion Ape’s own.