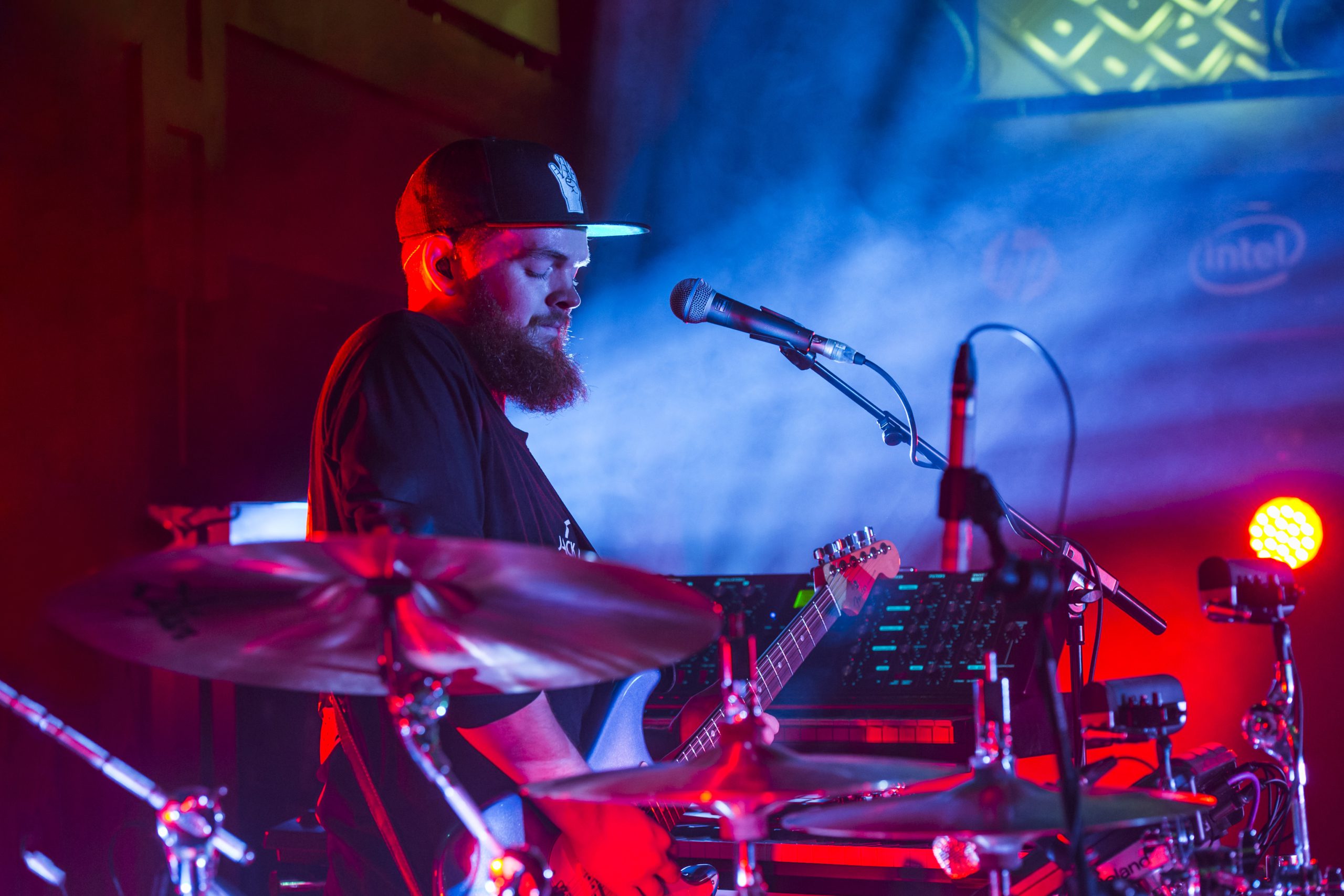 The second instalment of HP Lounge saw them team up with British musician Jack Garratt with a private gig for fans while coinciding with the showcasing their stunning new Spectre laptop. Under the banner of Reinvent Obsession the gig was played at London’s One Embankment. Continuing the exclusive private gig and online content for HP Lounge, Jack Garratt headlined with AlunaGeorge supporting. We managed to get access to Jack and ask him a few questions before he played his set. Coming off the back of his Critics Choice Award from the Brit Awards, Jack has been increasing his stock with numerous accomplished performances.

What are your musical influences?
My musical influences come from lots of various places, only because when I grew up my Mum and Dad opened my ears to lots of different genres. Without Question. It wasn’t even a forced sort of things where they’d say ‘oh Jack listen to this’. Even my brother or my sister it was never anything that we had to listen to something. There was just music everywhere and all the music was different.
I’ve been having a resurgence of Paul Simon recently which I’ve been really enjoying. I went back and listened to Still Crazy After All These Years, which I didn’t know, but is now my new favourite Paul Simon record. Right now, that album means a lot to me – I don’t know why – but on top of that, I’ve been listening to nothing but the new Kendrick record just because it’s the most inspirational piece of jazz hip hop I’ve heard in a long time.
But being able to appreciate different styles and genres of music is a very fortunate thing because it’s not something you find in everyone. I remember when I went to school and as kid and talking about all these bands that I loved and having my friends go ‘what?’, and I’d just assumed everyone had the same tastes in music. It’s only then do you realise you are person with a personality.

What music resonated with you the most growing up?
As a kid, Stevie Wonder was a big big heavy punch for me – only because he took all the things I loved and put it together. I’d listen to NSYNC and Justin Timberlake and Five and the kind of more manufactured pop side of what kids my ages were supposed to listen to. But then I heard Stevie Wonder and suddenly I put pieces together by listening to him in Justin Timberlake I listened to but it came from 30 years before. Then suddenly my whole world got blown apart by this guy who reinvented pop music and influenced a whole generation of pop musicians.
Growing up in an age where I got to appreciate and understand the music of N*E*R*D and Timberland and Justin and that kind of justified movement, as it where, and then all the other RnB influenced pop music that came out at that time. It affected me.

What influences you now?
The thing I find I get influenced the most and inspired the most are when a musician and artist does something that isn’t usual to themselves, not confined by their own name or image. So for example, Stevie Wonder who took something like pop music which was so formulaic and turned it into Songs in the key of Life. Or, Davide Bowie. Who took something like pop music and turned it into anything he wanted. Or Prince even. Those names become infamous for change rather than becoming famous for a particular sound or ability. Nothing those three artists I just mentioned did anything that sounded like anything else they did in their career because they changed and progressed. They became new every time that they needed to become new.

Is image important to you?
The likes of Bowie and Prince in particular, for those two very iconic figures in not only the music world but the art world, to do those things and stand up as men comfortable in their own skin and not even talk about the fact that they would wear make-up or wear clothes not for their sex. But they just would do those things because it shouldn’t be questioned. It’s an incredibly inspiration thing to see. I was interested in acting and performing and I was interested in image and the way something looks.
I would hope that it’s not horrendously important to the sale of a record to look a particular way, but I can also understand how it is. I spent 20 years of my life not really enjoying anything about my appearance and the way I looked and they way that I was perceived by other people. I was fat and didn’t do myself favours and stuff like that. As a teenager I grew my hair out and had an afro, much to the disappointment of my sister and my mum.
But now it’s been really fun for me to be getting into fashion and seeing what’s out there. I’ve actually been wearing a lot of dungarees recently just because. Male fashion seems to me to be a very strange place because it’s either like ‘hey cool – nice plain jeans’ and ‘those are some white sneakers’ and ‘I like the way your top doesn’t have anything on it’. It’s a lot of that. Otherwise it’s like, ‘I like the 6ft wings that come out of your jacket’ but you have to wear it on runway otherwise it doesn’t make sense. Mens fashion exists in those two parallels and it’s kind of difficult to find a nice middle ground where you can wear something interesting and unique.

What inspired you to start growing your beard?I just forgot to shave for a couple of weeks. I was unemployed and at home and didn’t have a girlfriend at the time. I was just like ‘I forgot to shave again’. And then a friend of mine I was living with asked if I was growing a beard. I ran with it and said I was. It’s been a funny one only because I like it and I have no other reason to have it on my face other than I like it. I oil it, wash it and comb it and treat it like any other hair on my body.

How do you think a streaming service like HP Lounge benefits your fans?
The way the internet and live media are working together at the moment is interesting because it’s still very much in it’s infancy. It’s the same with music and online with the immediacy of that and being able to download any song. The immediacy of it all is incredible but also dangerous and I think live streaming is the next logical step but I’m interested to see what happens with it. For stuff like this (performing at HP Lounge gigs) I get to do a show and people at home get to watch it. Though I would encourage people to go see the real thing, you’re allowed a moment, such as when people record on their phones at a gig. This is a nice way to hybrid those two ways of thinking that you can exist in a moment but also capture it.

HP Lounge – Get Closer to the Artists you Love

Building on its successful partnership with Universal Music Group, the world’s leading music company, HP is also introducing HP Lounge, a new entertainment service that lets users immerse themselves in the universe of their favourite artists.    HP Lounge is a truly immersive platform for music fans. Users can enjoy specially curated content from HP and Universal Music including behind-the-scenes news, making-of videos, artist interviews and album reviews. They will also have the chance to win concert tickets and gain access to exclusive money can’t buy music experiences such as meet and greets with their favourite artists, recording studio visits and VIP packages to private showcase events. Customers can also enjoy 12 months of ad-free, unlimited web radio streaming of the biggest names from Universal Music’s unrivalled catalogue via a variety of stations grouped by genre, artist or mood.

“The HP Spectre is the thinnest notebook in the world, and unlike the majority of other super thin PCs on the market, this laptop doesn’t compromise power or features,” said Louis Perrin, director, consumer products, Personal Systems EMEA, HP Inc. “A beautiful edge-to-edge display, Intel® Core™ i processors coupled with Bang & Olufsen sound and a sexy and thin design, HP amazing engineers set a new standard with the all new Spectre.”

HP reimagined every element during the design of the HP Spectre to ensure the best user experience coupled with maximum performance. The result is a premium notebook PC that does not force users to compromise on style, function or performance.