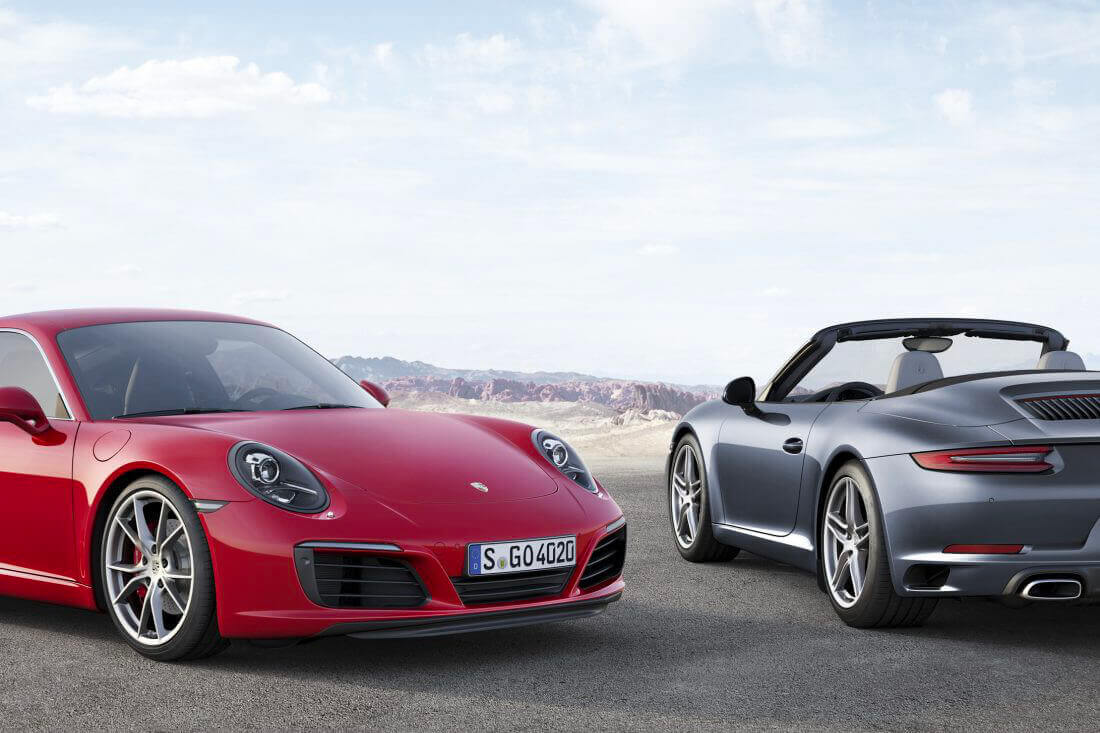 The 911 has been the world’s best-selling sports car for decades, and the new generation builds on this success with innovative turbo flat engines, an advanced chassis with an even greater spread between performance and comfort and a new infotainment system.

We see rear-axle steering available as an option for the Carrera models for the first time- helping to deliver the 911’s fastest lap time on the North Loop of the Nürburgring ever, in just 7 minutes and 30 seconds – ten seconds faster than before.

The big news with the new 911 models is the aforementioned turbo additions in the ‘standard’ Carrera models, but as ever Porsche have refined the 911’s exterior features: these range from new headlights with four-point daytime running lights to door handles without recess covers, a redesigned rear lid (what does everyone think of this?) with vertical louvres and new rear lights – including the characteristic four-point brake lights.

In the interior the new standard Porsche Communication Management with a multi-touch display offers a considerably expanded range of functions and simplified operation.

The completely new engine generation with bi-turbo charging delivers a 20 hp power increase coupled with lower fuel consumption, with 370 hp (272 kW) of power in the 911 Carrera. The 911 Carrera S now delivers 420 hp (309 kW). In both cases this represents a power increase of 20 hp (15 kW). Both engines have a displacement of three litres.

The greater power of the 911 Carrera S results from turbochargers with modified compressors, a specific exhaust system and tuned engine management.

The 911 Carrera Coupé with Porsche-Doppelkupplung (PDK) and Sport Chrono Package can hit 0-62 mp/h in 4.2 seconds – making it two tenths of a second faster than its predecessor. The 911 Carrera S with PDK and Sport Chrono Package arrives in just 3.9 seconds (also 0.2 s faster). This means that it is the first 911 in the Carrera family to undercut the magic four second mark.

The active rear-axle steering that is available as an option for the 911 Carrera S is chassis technology adopted from the 911 Turbo and 911 GT3. It further enhances the turn-in behaviour of the 911. In addition, it makes for high driving stability when changing lanes at high speeds. At the same time it ensures greater manoeuvrability in city traffic thanks to the turning circle reduced by 0.5 metres.

A standard feature of the new 911 Carrera models is the newly developed Porsche Communication Management System (PCM) including online navigation module and voice control. The PCM can be operated by performing multi-touch gestures on the seven-inch display, similar to operating a smartphone. User inputs by handwriting are possible, for instance. Mobile phones and smartphones can now also be connected via Wi-Fi. The smartphone tray being integrated for the first time in the centre armrest also offers battery-saving charging and optimised mobile phone reception. Also new is the option of connecting an iPhone to the PCM to use Apple CarPlay. Real-time traffic information is available for significantly improved navigation. It gives the driver a quick overview of the traffic situation and guarantees dynamic adaptation of the route to this information. Google Earth and Google Streetview are also being integrated for the first time to offer better orientation. Other components of the PCM are Porsche Car Connect and the Porsche Connect app, which can be used for such functions as remote control of vehicle functions, transfer of destinations to the PCM for navigation and use of music streaming services by third-party providers via the PCM.

The new Porsche 911 Carrera models will be launched in Germany on December 12, 2015 at the following prices including VAT and country-specific equipment: