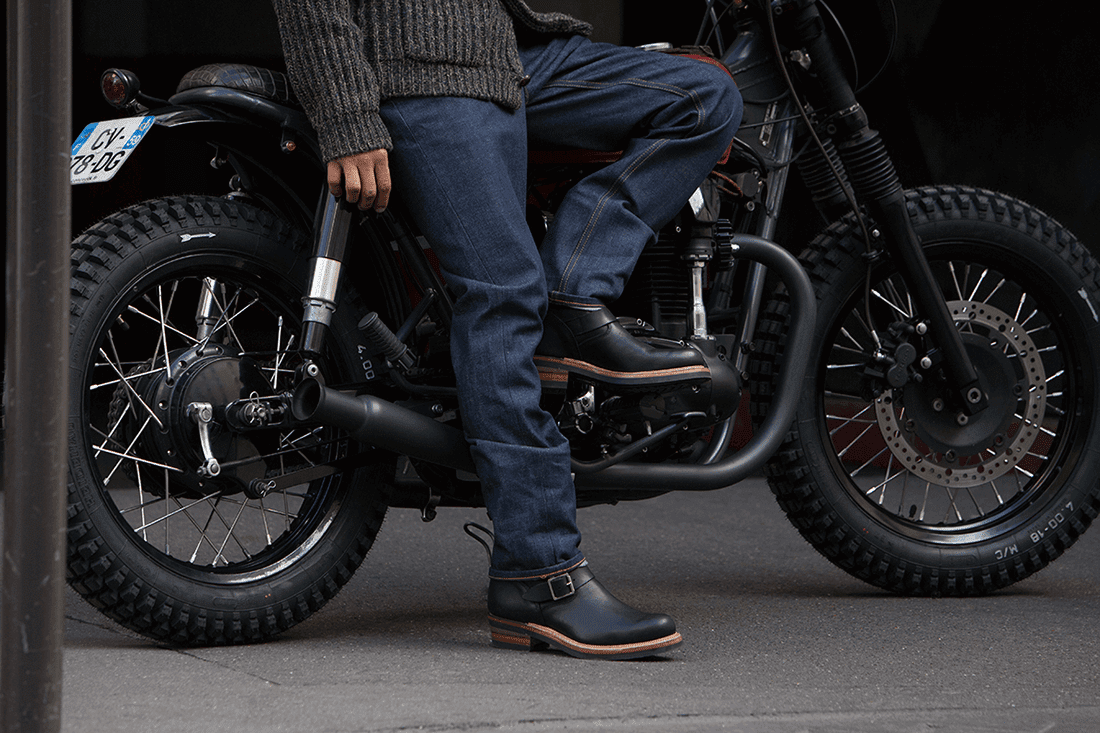 Today we are talking about craft and more specifically Australia’s iconic boot maker, R.M.Williams who has teamed up with Paris-based custom garage, Blitz Motorcycles to create a unique custom motorcycle and footwear collection. Together, R.M.Williams and Biltz Motorcycles have handcrafted a bespoke scrambler which will launch at Harrods in London on 29th September, 2017. The collaborative project seeks to celebrate craftsmanship and R.M.Williams’ passion for hand-tooled leathers while referencing the Australian drovers who utilise motorcycles to heard cattle over the Australian outback. 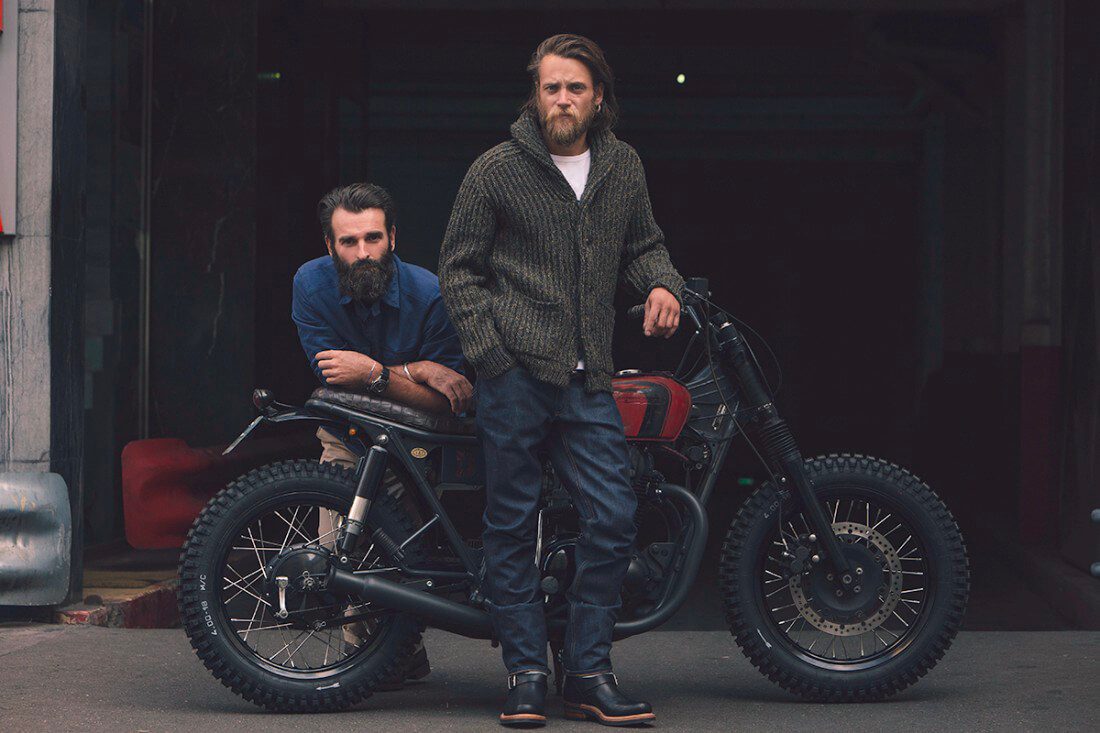 Many of the original drover motorcycles were based on vintage parallel twin-engine bikes. In order to convert these into a scrambler model, more effective for the outback terrain, the Blitz team has followed the customisations made by drovers in the mid Twentieth Century. The motorcycle frame has been lowered and knobbly tyres added to provide improved handling on sand and desert as well as grassland. To complete the scrambler style, track handlebars have also been added. 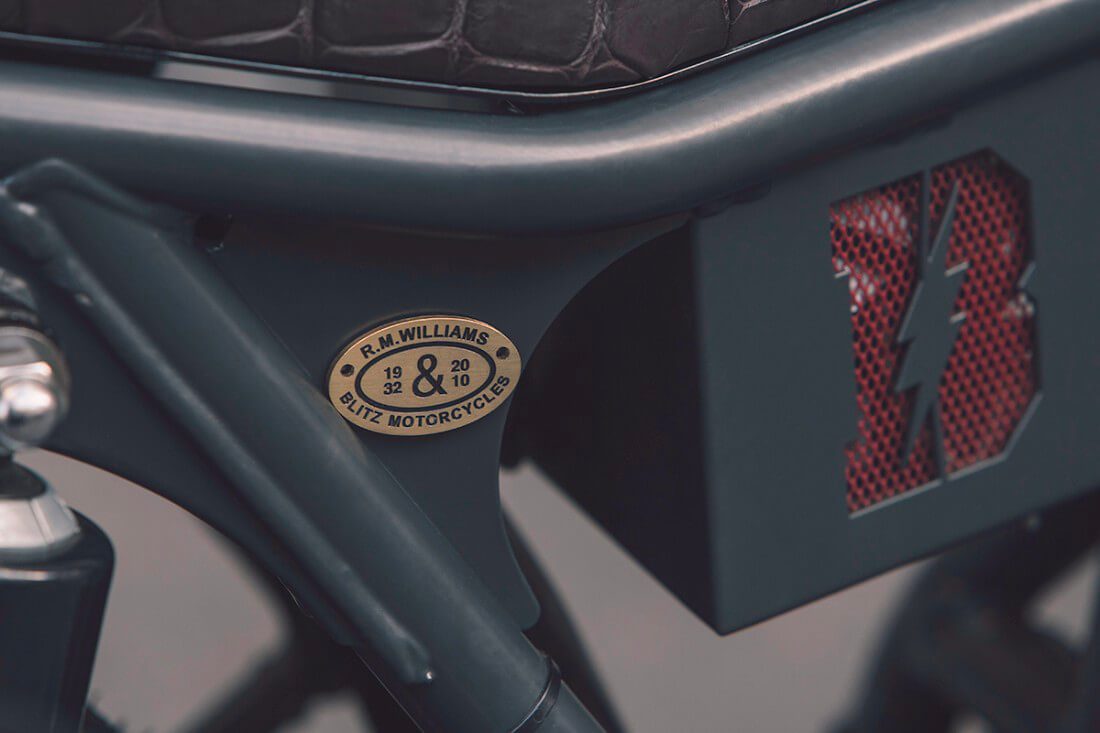 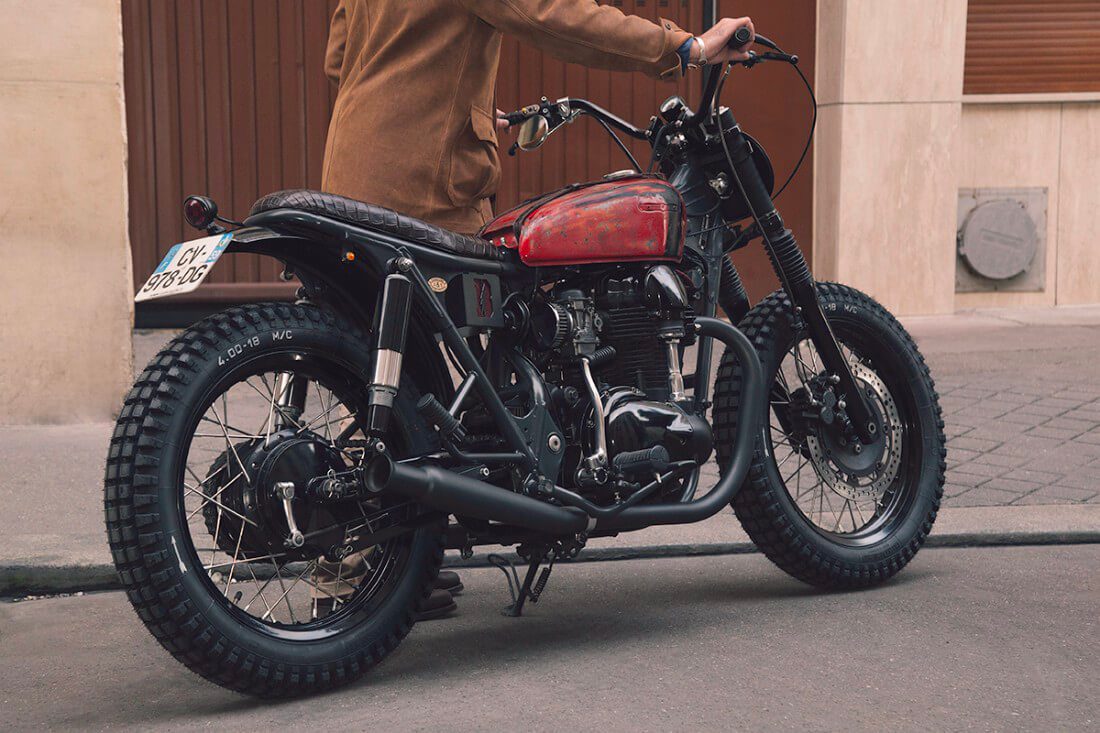 In addition, R.M.Williams recreated two versions of the brand’s original motorcycle boot, first created in 1993. The Scrambler boots will be available in two leather options, chestnut crocodile, an exotic leather available through the brand’s bespoke service and priced at £4,995, and black New Zealand cowhide, a leather exclusive to the collaboration, priced at £595. The Scrambler boots feature a tread rubber sole and are the result of 85 hand-held processes. These limited- edition boots will be available for purchase both at Harrods on the Fifth Floor though the R.M.Williams Made-to-Order service and via the RMWilliams.com website. 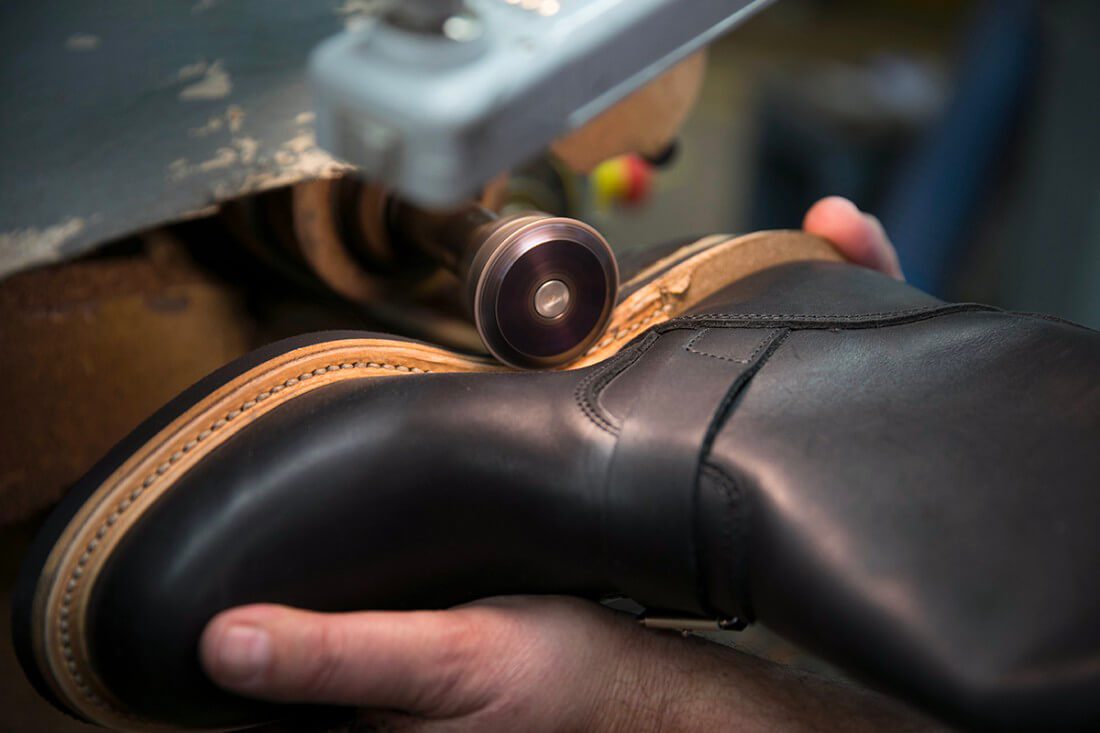 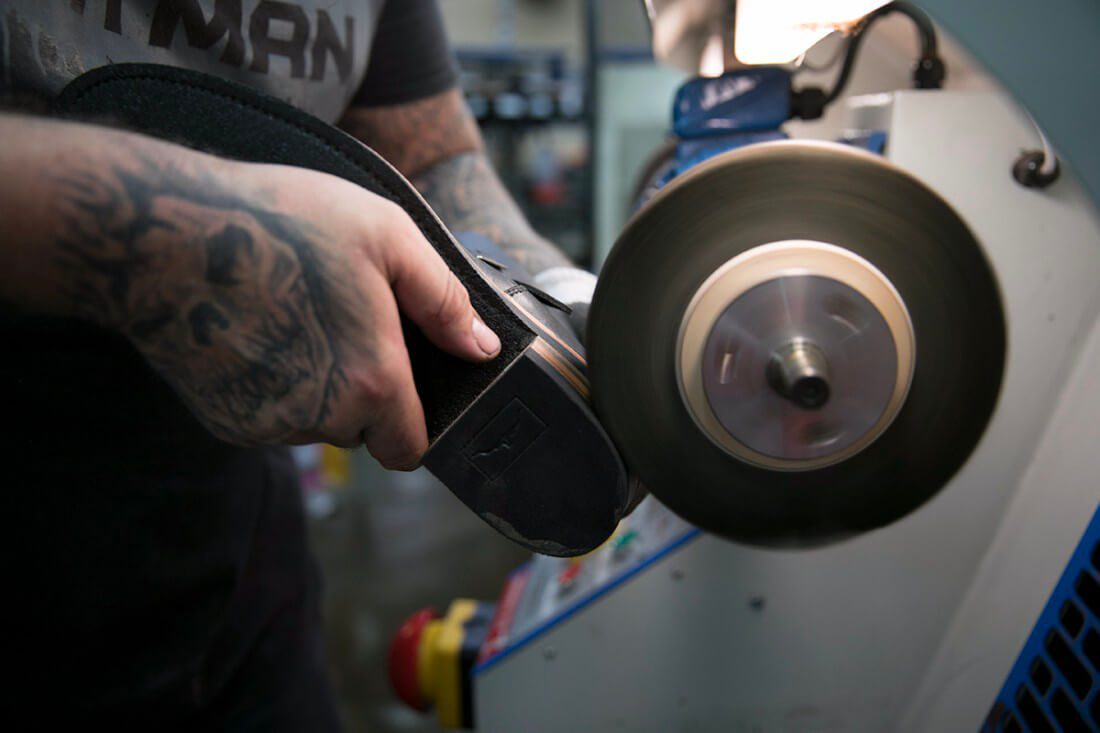 Echoing the Scrambler boots, the unique motorbike features the same exotic chestnut crocodile for its saddle, handlebar grips and tank straps- all handcrafted at the R.M.Williams workshop in Adelaide, Australia. The bike also features a front plate carrying the RMW initials and a race classification plate featuring the number 32, the date R.M.Williams was founded. Priced at £40,000, the motorbike is supplied with a pair of bespoke crocodile skin Scrambler boots handcrafted from the same pelt as that used for the bike’s saddle, grips and tank straps. 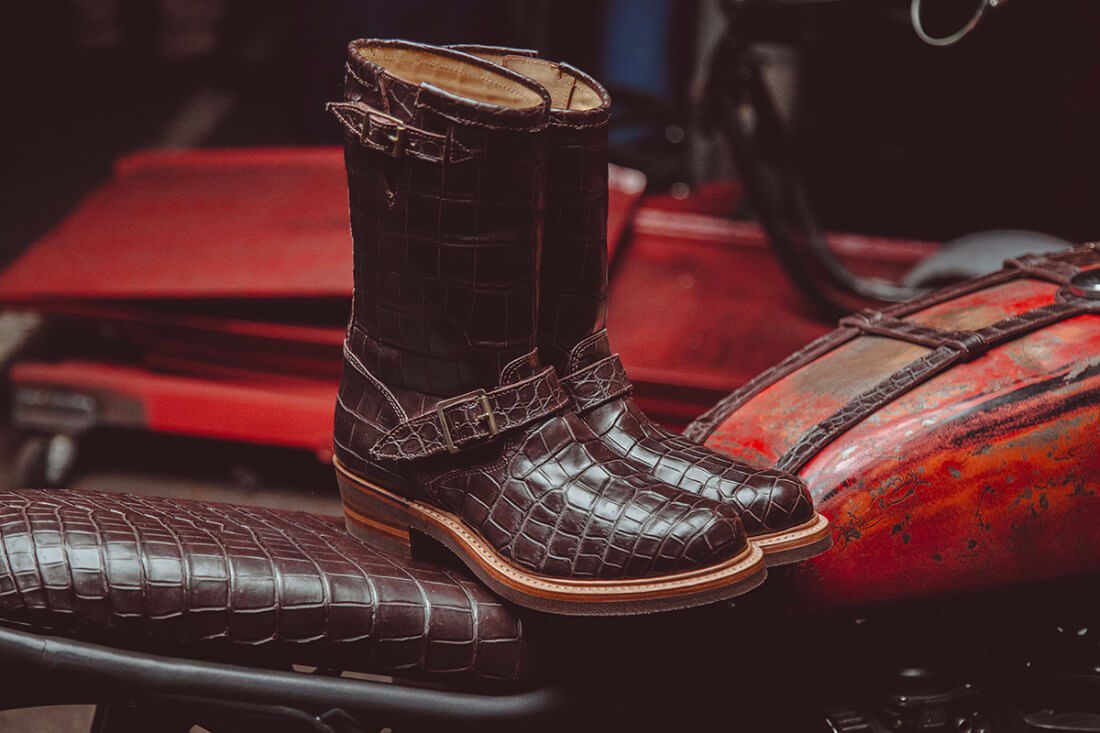 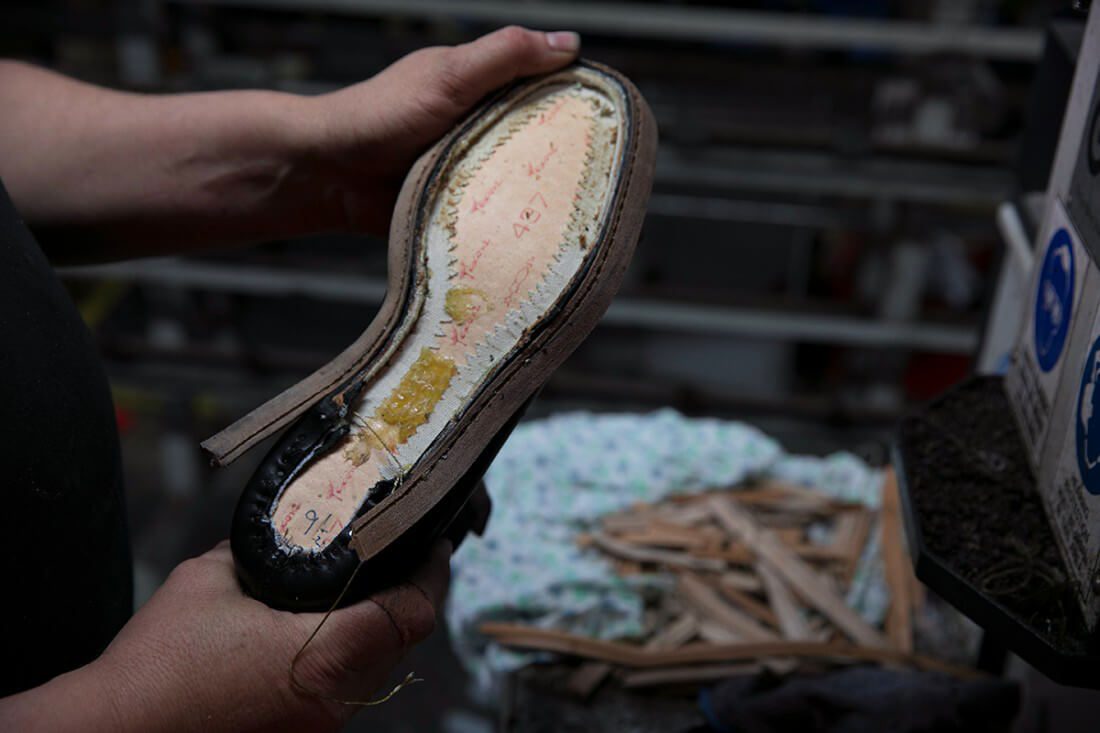 The Blitz team has been meticulous in its technical modifications to this unique motorcycle. At the heart of the bike is a parallel twin 650cc engine featuring a K&N air filter and re-jetted caburettors. Eighteen-inch trial scrambler tyres have been applied to both the front and rear and a 1970’s vintage fuel tank has been added with bespoke R.M.Williams strapping. A bespoke rear loop has been welded onto the original frame with a signature Blitz battery box welded underneath. All electrics have been fully rebuilt with wiring connecting to Blitz Motorcycles mini-switches mounted on vintage US Triumph handlebars. The braking system has also been fully serviced and updated with new pads, a new master cylinder and a bespoke braking hose. A Campbell muffler has been connected to the original exhaust pipe which has been ceramic painted. Also, the entire frame, pegs, side stand, triple tree, fork legs, swing arm, handlebars and engine covers have been powder coated. Additional modifications include a bespoke rear mudguard and new shock absorbers.

The R.M.Williams x Blitz motorcycle will take centre stage in an installation launching on the Lower Ground Floor at Harrods on 29th September and featuring throughout October. The area will also present a film chronicling the six-month development of the R.M.Williams Scrambler boots and this unique motorcycle. On the Fifth Floor, there will be a bespoke R.M.Williams trunk, showcasing the extensive options offered as part of the brand’s bespoke footwear service.