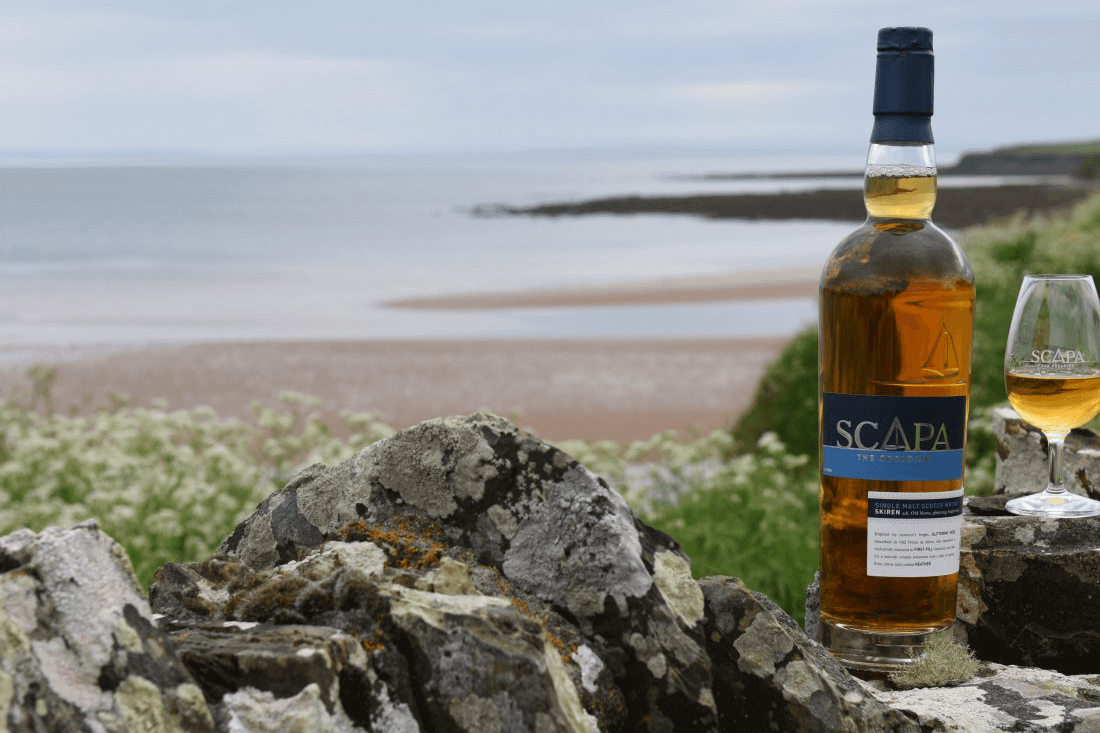 One of Orkney’s ninety islands is inhabited by an order of monks –another by a ex Jethro Tull roadie. It’s typical of the contradictions rife throughout the Scottish archipelago. The pace of life seems slower – yet the islands are home to the world’s fastest commercial flight (47 seconds between Westray and be at Papa Westray.) And although Orkney lies just thirty miles north of mainland Scotland, most Orcadians feel a distinct separation – “we talk about ‘going to Scotland’ as if we weren’t part of it,” one local explains.

One art form which does associate the islands with the mainland though is the tradition of whisky-making. It’s home to both Highland Park and Scapa Distillery. Whisky-drinkers shouldn’t expect a traditional island malt though. Indeed, the newest expression at Scapa Distillery harnesses Orkney’s trademark unpredictability.

Scapa Skiren whisky is bottled at 40% ABV and aged in first-fill American bourbon casks, which are stored in a grey Orkney stone warehouse. The warehouse is so close to the coast, it could be licked with sea spray. Yet there’s little present in the whisky. Instead, Scapa Skiren is rich with tropical, pineapple flavours – hints of sweet pear and old leather.

A tour round Scapa Distillery reveals the process to be unique too. The distillery is still run manually. There’s not so much as a calculator in sight, let alone automated machinery. Distillation is done in a Lomond still – the only remaining one in the Scotch whisky industry – which is responsible for the fragrant sweet whisky. Most remarkably though, the whole operation is run by just five men.

The distillery dates back to 1885. The building and machinery have largely resisted modernisation, but there are rumblings on the horizon. Since May, production increased from 400,000 to 1,200,000 litres per year, and a visitor’s centre also opened four months ago. The implication is that parent company, Pernod Ricard, are positioning Scapa Distillery for bigger things.

With the constant growth of whisky tourism, and the allure of Orkney, it’s no surprise. The name of the new expression, Skiren, is Old Norse for ‘glittering blue skies’ – a siren’s call to whisky enthusiasts. Yet Orkney’s glittering blue skies are the islands’ ultimate unpredictability. Just as the weather can coax jumpers off backs, so the blue skies can suddenly be engulfed by bands of Orcadian fog and sea-haa. A dreich day makes this tropical dram even more delicious, but somehow more incongruous than ever.

Scapa Skiren has a RRP of £40. It’s avail at select retailers including The Whisky Shop from mid September.