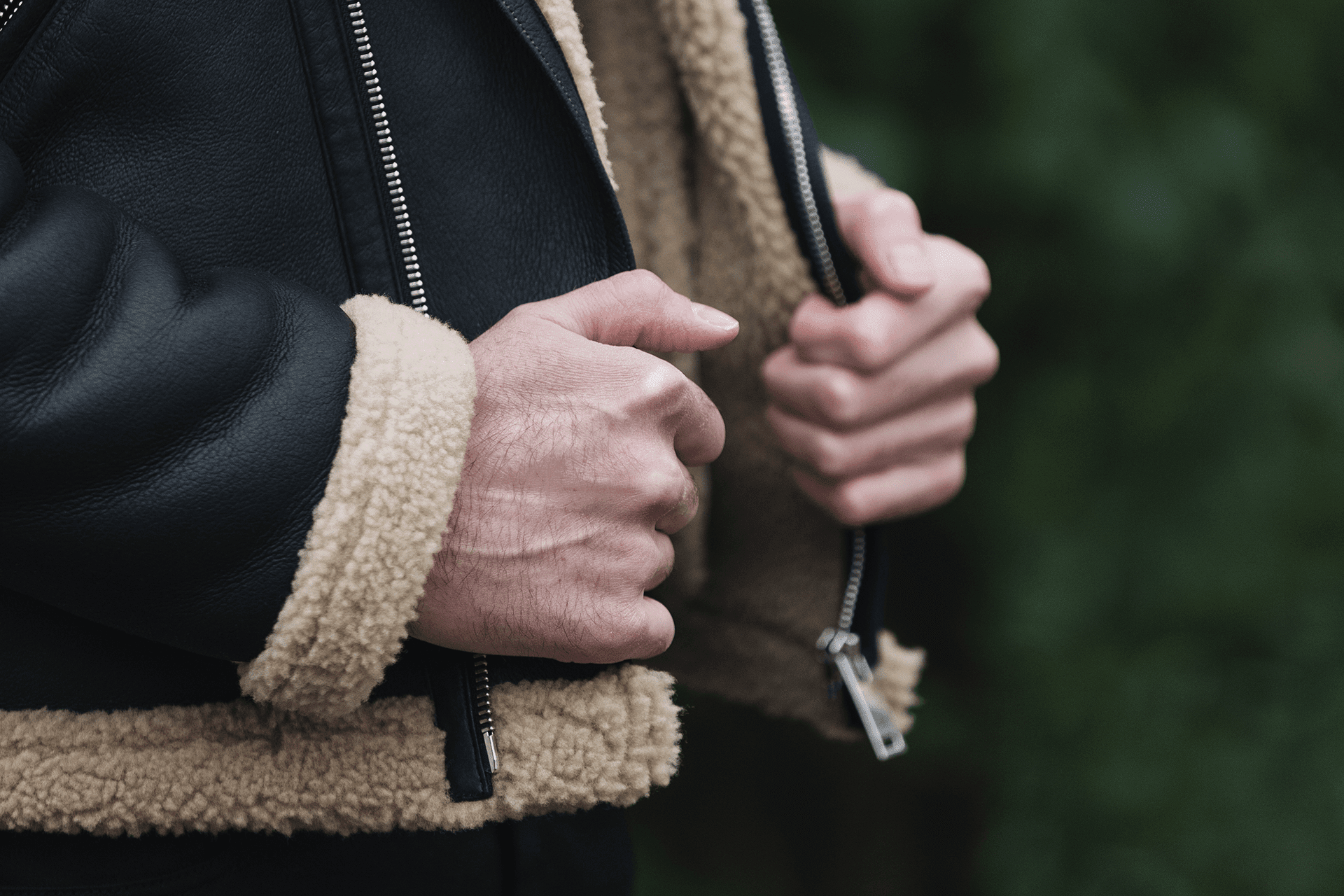 The shearling (or sheepskin) jacket is a classic piece of outerwear as well as a supremely functional asset for any winter wardrobe. Immortalised as part of the uniform of Second World War aviators, the iconic coat has a long and illustrious history dating back even as far as the dawn of European civilisation. In the following, Ape covers the timeline of the shearling jacket, discusses its most celebrated wearers, and shares our secrets to wearing shearling with style.

The Story of Shearling

Wearing sheepskin as a form of protection from the elements is a tradition which began as long ago as 4,000 B.C. and the Stone Age. The soft, warm and light properties of the material were as revered then as they are today, although the form of the jacket was a far cry from the modern appearance we now know, being used mainly as a simple raw material to be draped over the body.

The first significant progress came over 3,000 years later, during the Iron Age. As the quality of the material improved, sheepskin was used as a symbol of social status and recognition. The better quality sheepskin you wore, the more important you were.

The use of shearling as a luxury status symbol as well as a source of comfort and warmth continued for centuries into Tudor times, where aristocracy and royalty alike opted for large sheepskin gowns as their outerwear of choice. It was not until the Victorian period – the starting point for many of the innovative technologies and designs we appreciate today – that the shearling jacket as we know it was formed. A classic winter coat with a masculine design, the way was paved for its growth and impact in the centuries that followed. 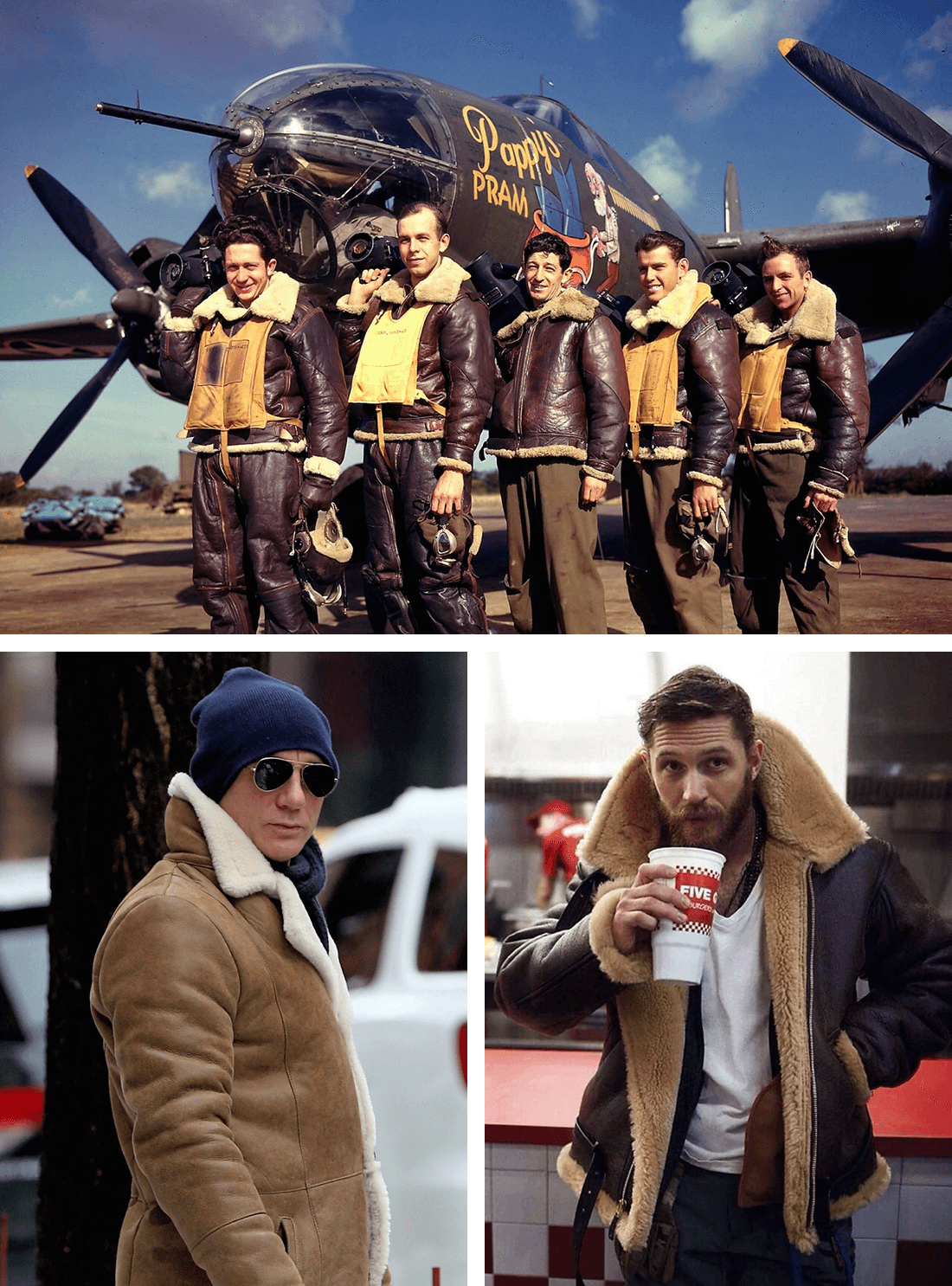 However, it was the 1940s and the Second World War that truly cemented the shearling jacket as a cultural focus point. The B3 sheepskin bomber jacket saw plenty of action – a piece of standard issue uniform since 1934, it was worn frequently by pilots in the US Air Force. The RAF on the other hand, opted for the Irvin jacket.

While the grade of sheepskin used in the Irvin was considered heavy, the jackets themselves were light and free from restriction, keeping pilots and crews warm at altitudes where temperatures would regularly drop to sub-zero levels, while also allowing them to control the aircraft free from the hindrance of a more unwieldy winter coat.

Images of brave flight crews heading out on sorties and raids during the Battle of Britain, D-Day and beyond became iconic, and the sheepskin jackets they wore became a symbol of courage and freedom. Of course, as with any trend, it wasn’t long until the shearling made its way into Hollywood, where it took on a new life during the US economic boom of the 1950s.

The cultural revolution that kicked off in the ’50s saw the movie industry look to the shearling as its go-to outerwear piece for its greatest leading men. One of the first notable wearers of the jacket on the silver screen was Marlon Brando, in 1954 crime drama On The Waterfront, while symbol of teen rebellion James Dean also donned the shearling in the 1956 western Giant. The ’80s saw the sheepskin jacket enjoy somewhat of a resurgence, spearheaded (for better or for worse) by Tom Cruise in 1986’s Top Gun. Meanwhile, on the other side of the Atlantic, the shearling was given a more lighthearted role, providing warmth to David Jason’s Del Boy Trotter as he wheeled-and-dealed his way through Peckham.

The prominence of the much-admired jacket remains as strong as ever in the modern day. In 2012, shearling was given a touch of evil charm in The Dark Knight Rises, dressing Batman’s nemesis in the form of a particularly well-dressed Bane, played by the equally stylish Tom Hardy. Away from the land of fiction, you don’t have to look hard to find a multitude of famous shearling wearers – the likes of Mark Ronson, Drake, ASAP Rocky, Ewan McGregor and countless more have all been recently photographed sporting the coat.

How to Wear Shearling

The shearling might look fantastic on the world’s leading men, but can the average gent wear a sheepskin to the same effect? The short answer is yes, but it’s vital to style the remainder of your outfit appropriately to have the best impact. As with many garments that began life in the military, the functional aspects of the shearling are fantastic – these alone in fact, are reason enough to wear one. In its wartime usage, the long sleeves were zipped to allow for easy wearing of gloves, the wide collar provided great insulation around the neck area, and the belt fitted at the waist prevented draughts from creeping in. While the original jackets didn’t require pockets, many modern styles have included them for extra functionality. 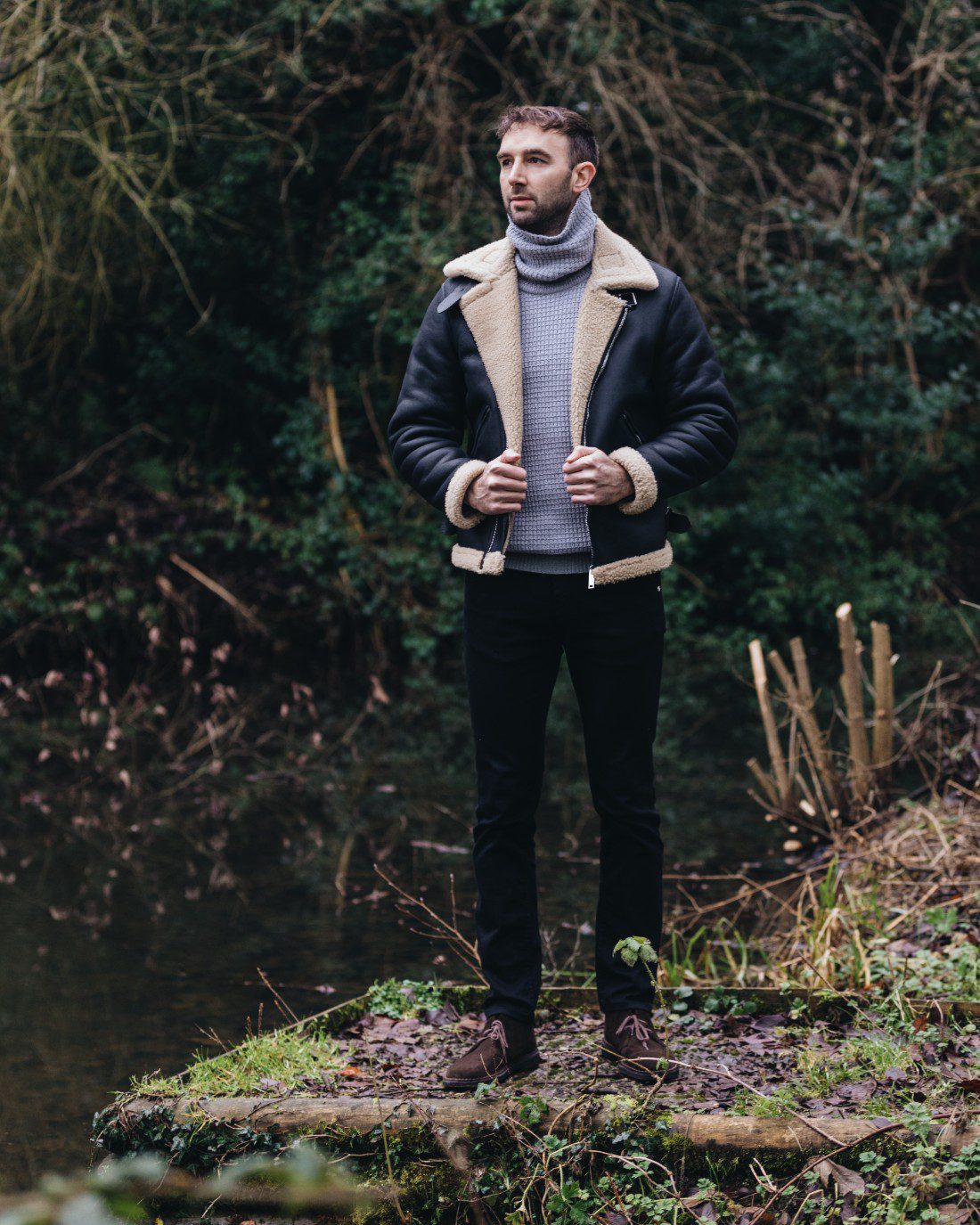 For a modern take on James Dean’s old-school ’50s Western approach to the shearling, wear it with a classic pair of denim jeans, or even a denim shirt – but make sure you don’t over-egg the pudding by wearing both of these together. If you’re new to the shearling, or simply want to stay warm without making too much of a statement, consider a shearling-lined corduroy jacket – the darker colour of the exterior commands less attention, but still retains that classic style. 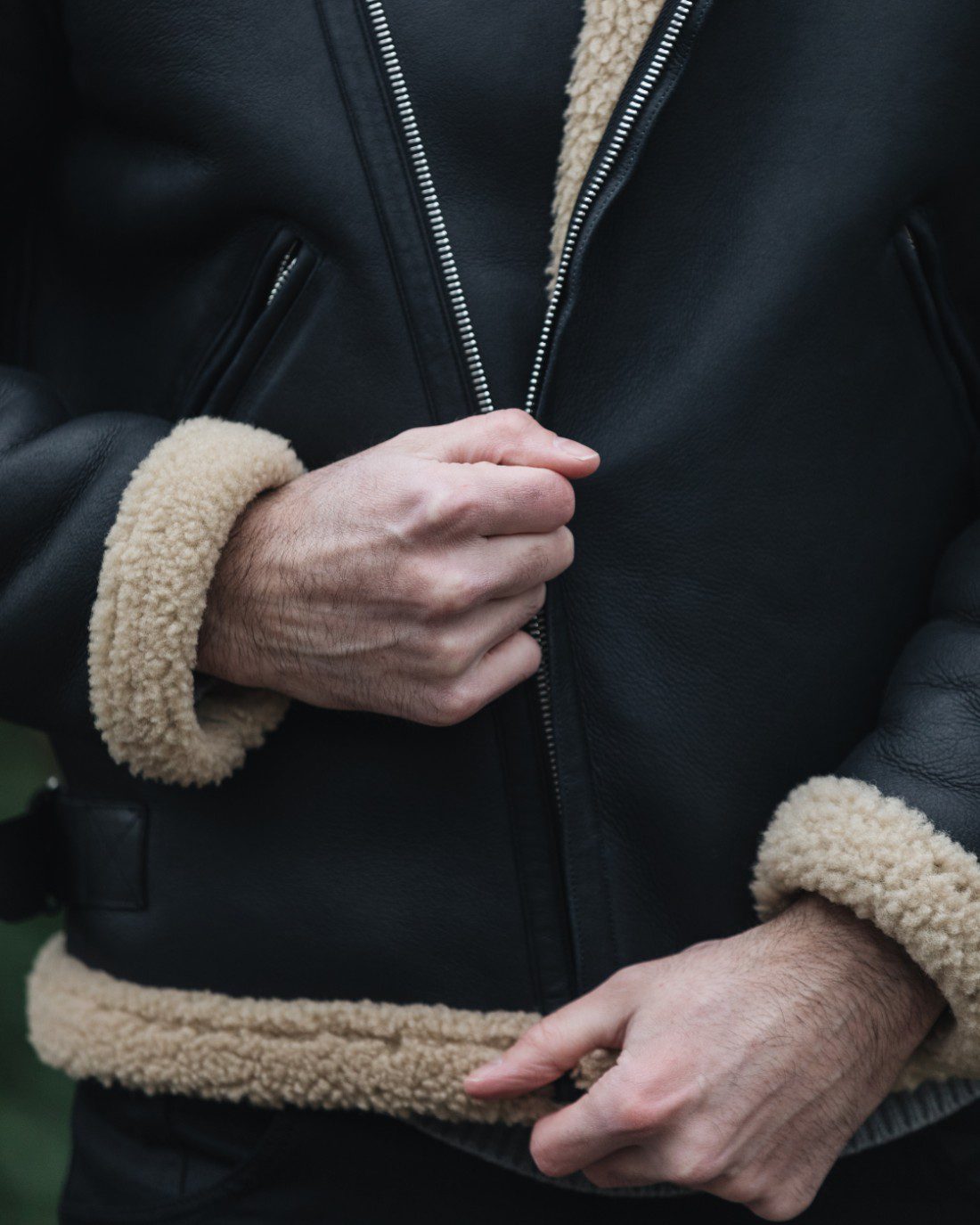 For a versatile off-duty look, stick with a pair of jeans or coloured chinos alongside a crew-neck for something a little more understated, or alternatively a graphic t-shirt if you’re really looking to stand out. Leave the aviators at home unless you’re attending a fancy dress party as Maverick. 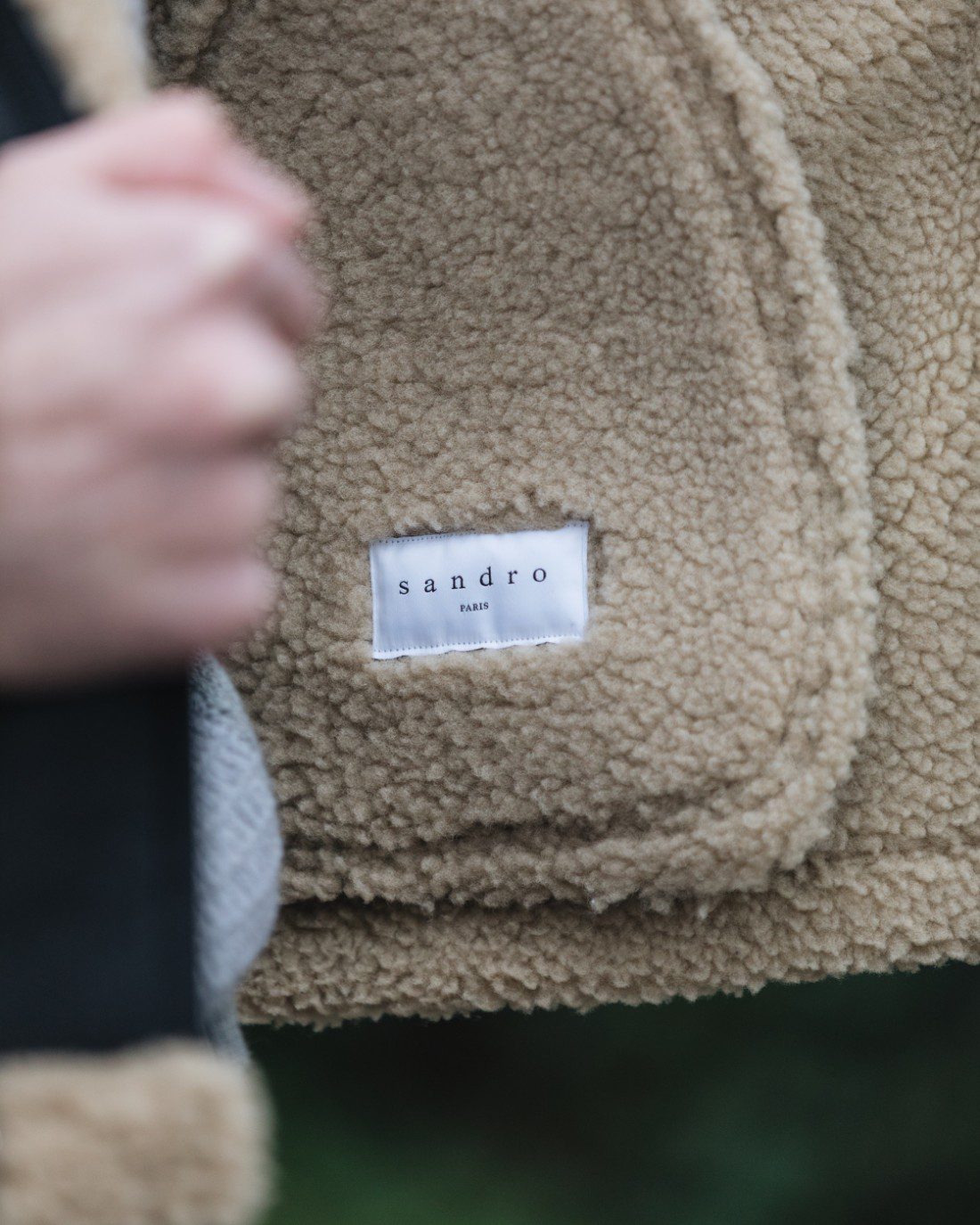 For smarter occasions, you may want to consider wearing a longer length shearling with your suit to guarantee warmth and formality in equal measure. Alternatively, a matching button-up shirt and smart trousers alongside a well-chosen pair of brogues will help your shearling stand out as the centrepiece of a bold smarter outfit.

The greatest functional strength of the sheepskin jacket is its warmth and comfort, and your choice of accessories can capitalise on this. A knitted, well-fitting roll-neck sweater and plain scarf will provide detail and depth without taking too much attention away from your jacket, as well as keeping your head and neck warm in the most challenging conditions. A sturdy pair of boots will allow you to wear your jacket in less hospitable terrains, while also adding an aspect of rugged style to your outfit.

An item respected for its functional capabilities as well as renowned for its place in the style landscape over many decades, the shearling jacket is powerful addition to any man’s wardrobe. At its best, this versatile, classic piece of menswear is a true icon – wear it well.