Cigars have an undeniable appeal and to many of us they form a key part of the quintessential gentleman’s image, and taste superb (in the main). Beyond this and much more importantly – the act of smoking a cigar, a one on one with a good friend or a business associate. Your phone on silent, a drink in hand, a serious conversation – a moment of mindfulness and a deep connection with your fellow cigar enthusiast, this is the true benefit of a cigar. If you’re new to cigars, however, it can be overwhelming to know where to start – but fear not for we have some words to assist. Taking a little time to select the right cigar to begin with will pay off in the long run. Many new smokers have been turned off from cigars simply because they failed to start out with the right cigar. Where to Buy Your First Cigar

If you can, purchase your first cigar at a bricks and mortar tobacconist. While there are advantages and disadvantages to buying at a bricks and mortar (it might cost a little more than shopping online), you do get the priceless benefit of being able to speak with the owner. It can be helpful to get some advice from someone with experience who can help you choose your first cigar to meet your personal requirements. If you don’t have access to a traditional tobacconist, we recommend shopping online for a sampler (a pack of five different cigars for example) so that you don’t break the bank on a box of cigars which you may or may not ultimately like. Why shouldn’t you purchase a cigar at a convenience store? These cigars usually aren’t stored in humidors, which means they aren’t of the highest quality. If your first cigar hasn’t been stored properly, it probably won’t be all that enjoyable and you may make the mistake of thinking that cigars aren’t a pleasurable experience.

The next obvious question is of course what you should get.  To start with, you need to learn the basics. Most cigars are straight cigars (parejos) or fancy cigars (figurados). They come in different sizes which are quoted by length and ring gauge: it’s the diameter, expressed in. A cigar’s flavours come from the tobacco leaves used in the wrapper, binder and filler. The filler consists of the innermost leaves, surrounded by the binder, and the wrapper is the leaf enclosing the whole. We recommend you start out with a milder cigar in a standard size like a robusto (see below for our size guide) so you don’t overwhelm yourself (many new smokers are surprised at how strong cigars can be). There are plenty of good cigars in the £10-20 range which would be ideal for a new cigar smoker to try out. To begin, find a specialist tobacconist (information below), equipped with a humidor which keeps the cigars in optimum condition. Havana cigars are excellent but don’t overlook New World cigars. While Cuban cigars are legendary, and were the standard in the market and with good reason there are seven other countries that are worth considering too: Mexico, Ecuador, Brazil, Honduras, Cuba, Nicaragua and Dominican Republic.

Montecristo No.4 – a Cuban classic and the biggest selling handmade Habano in the world. Plenty of flavour, without being full in body, spicy and peppery throughout but not overwhelming. A reasonable strength without being sharp. £12

Hoyo de Monterrey Epicure No.2 – another classic Cuban cigar, suitable for beginners to experts, it’s full of light, ethereal charm in robusto size. It’s very approachable, easy to appreciate, and with plenty of depth for the educated palette. Mellow, yet flavourful. £16

Davidoff Nicaraguan Box Pressed Toro – originating from the Dominican Republic (with materials from Nicaragua) this rich and zesty Habano with full-bodied flavour offers palate-pleasing notes of earth, spice, leather, and espresso all complemented with a creamy sweet finish and pleasing aroma. £20

And for those of you who are on more of a budget, a few examples are Arturo Fuente Flor Fina 8-5-8 (a great cigar from one of the most famous manufacturers), Avo Domaine (a more expensive cigar which looks as good as it smokes) or, if you have access to Cubans, a Por Larranaga Petit Corona.  These are all mild to medium yet flavourful cigars which won’t break the bank. The great thing about visiting a bricks and mortar tobacconist is that you can get personalised suggestions according to the kind of flavour profile which interests you.

Now you just need to know how to smoke the cigar. If you get this wrong, you may end up missing the pleasure of which a cigar brings. A lot of beginners have some serious misconceptions about cigar smoking. For example, they try to inhale. This is a quick way to turn yourself off cigars forever. Smoking a cigar is not the same as smoking a cigarette. Here’s how to go smoking your first cigar.

First, you’ll need a cutter to cut about two-thirds of the cap off your cigar. The cap helps holding the wrapper – the outer leaf, responsible for a significant part of the cigar’s flavour – together. You can either use a cheap £5 guillotine cutter (sometimes you might even get one for free at a bricks and mortar) or a more sophisticated tool from brands like Davidoff and S.T. Dupont. You can also use a punch for “fat” cigars or scissors if you really want to stand out. 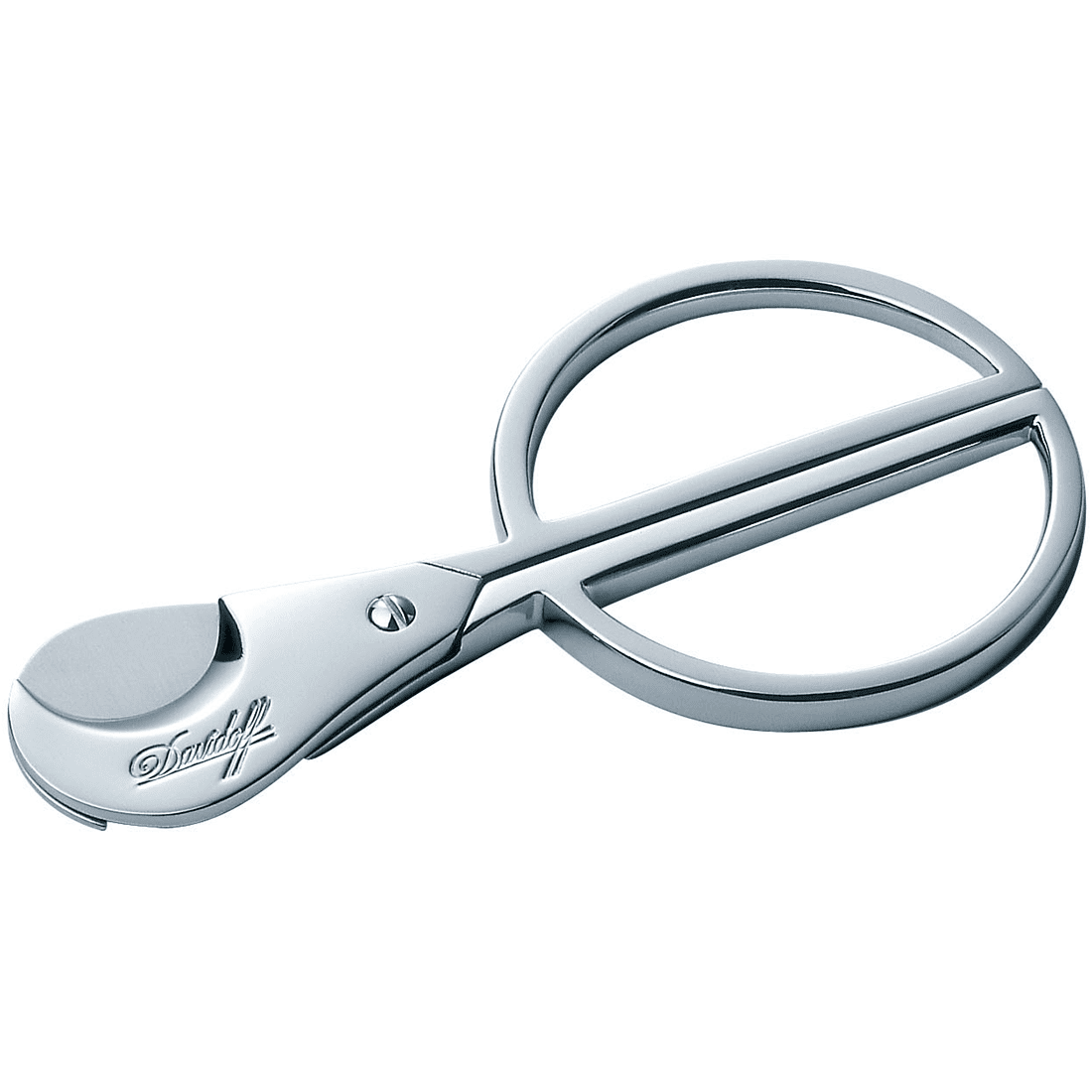 Not everyone holds a cigar one single way, but typically you would use your index finger and thumb. It’s a good idea to remove the band for reasons of smoking etiquette (no need to show how much your cigar is worth) and also so that it doesn’t interfere with your smoking experience later. It’s easiest to pull off the band several minutes into your smoke since the heat will reduce the adhesion. To light your cigar, the most orthodoxal way is to use a cigar match (it’s longer than a regular one) or with a butane lighter. Hold the cigar horizontally and, as you light it, rotate the foot (the end that you are supposed to ignite) so that you get a nice, even burn. Toast it well before putting it in your mouth. It’s important to work on the foot so all the surface is burning, then enjoy. The most important thing you can probably learn from this is do not inhale, at all.

To reiterate, do not inhale, at all.  It will just make you feel ill. Just keep the smoke in your mouth for a while, savour all the flavors, then slowly exhale. A couple of puffs a minute is the rate at which you will probably want to smoke most cigars. Again, a cigar is not like a cigarette. A cigarette is something quick you squeeze into your lunch break in the middle of the day. A cigar is a chance to unwind, relax, and really immerse yourself in an experience. Most cigars take about an hour to smoke, give or take. If the cigar goes out while you’re smoking, don’t fret. Just shake the ash off, relight, and exhale through the cigar to eject the cold smoke. Another etiquette question which often comes up is what to do with the ash. There aren’t any rules here, but generally speaking the longer the ash sticks to a cigar, the better made it is, which is why shaking off ash prematurely is sometimes seen as discourteous. If you feel like it is starting to obstruct burn or draw, then it’s time to shake it off. When is the cigar finished? The last couple of inches usually burn too hot and leave an unpleasant aftertaste. Don’t believe the nonsense that only the first half of a cigar is good – most premium cigars offer a satisfying experience right up until those last couple of inches. Cigars range from 20 minutes to 75 minutes in smoking time so don’t be afraid of making mistakes; you’ve got plenty of time to practice, and most people do but hopefully now you’ll be less likely to.

Where to Smoke It

If you’re planning at smoking your cigar of choice at home then I recommend heading to a specialist cigar shop to ensure you’re investing wisely and buy the right cigar for your taste. And there’s none better than James J Fox at 19 St James’s Street, London. It’s one of a very few number of shops to be exempt from the smoking ban making it possible to enjoy your cigar in their in-store cigar lounge as a sample with the view to buy more if you wish. Please also remember to pick up a humidor to ensure your cigars are kept fresh – a desk sized option is affordable and well worth the investment. If you want to enjoy your cigar away from your home make sure it’s somewhere with cigar smoking ‘facilities’ – the last thing you want is to feel ostracised for being a smoker. I like to relax at one of London’s finest cigar-friendly establishments – ideal for catching up with an old friend over a tumbler of cognac or whisky. Some of the best include No. Ten Manchester Street Hotel, The Corinthia Hotel Garden Lounge and The Den at 100 Wardour Street.

The recipe for success alongside fine conversation is pairing a drink to the cigar’s body (flavour profile). For instance, with a full bodied cigar, you likely need a full-bodied spirit that will not be overpowered by the cigar. They need to work in harmony with both the cigar and the beverage standing out so you can differentiate between the two. A full bodied cigar would work well with a peaty Scotch whisky like Lagavulin 16 whereas a medium bodied cigar would work better with a Speyside Scotch whisky such as Glenfiddich 12 or a VSOP Cognac from Hennessy. And that’s it gentleman, smoke well.