With a rich history and a design suited to both casual- and formalwear, penny loafers more than deserve a space in your footwear rotation. A silhouette favoured by everyone from rock stars to presidents, penny loafers have strong associations with preppy style, but their versatility means the shoe can be worn as easily with a business suit as they can denim jeans and an Oxford shirt.

From their Scandinavian origins to the most stylish versions you can buy today, here’s everything you need to know about penny loafers.

What Are Penny Loafers? The penny loafer has an interesting history. It went mainstream in the 1930s, when it was introduced to America by shoemaker George Bass (of G.H. Bass fame). But it was originally designed in Norway, where it was considered a practical shoe worn by local fisherman. It’s often thought that the penny loafer was an American invention, but it was merely made popular in the States when the likes of Bass started producing it and magazines such as Esquire began discussing it as early as 1936.

It’s easy to see why the style became such an overnight hit in the US, and why it continues to be a favourite among the fashion conscious today. The basic premise of the penny loafer is a simple one, with its easy-to-wear slip-on design, sleek silhouette and subtle detailing on the vamp. It’s comfortable, versatile and appropriate for all manner of occasions, from casual weekend outfits through to chic tailored looks.

There are subtle variations between penny loafers that influence their formality. Those produced on slimmer lasts, with more angled toes and minimal detailing are inherently smarter, whereas more laid-back takes feature chunkier soles and ‘beef roll’ stitching on either side of the vamp – a design trait that’s become a G.H. Bass Weejun signature. 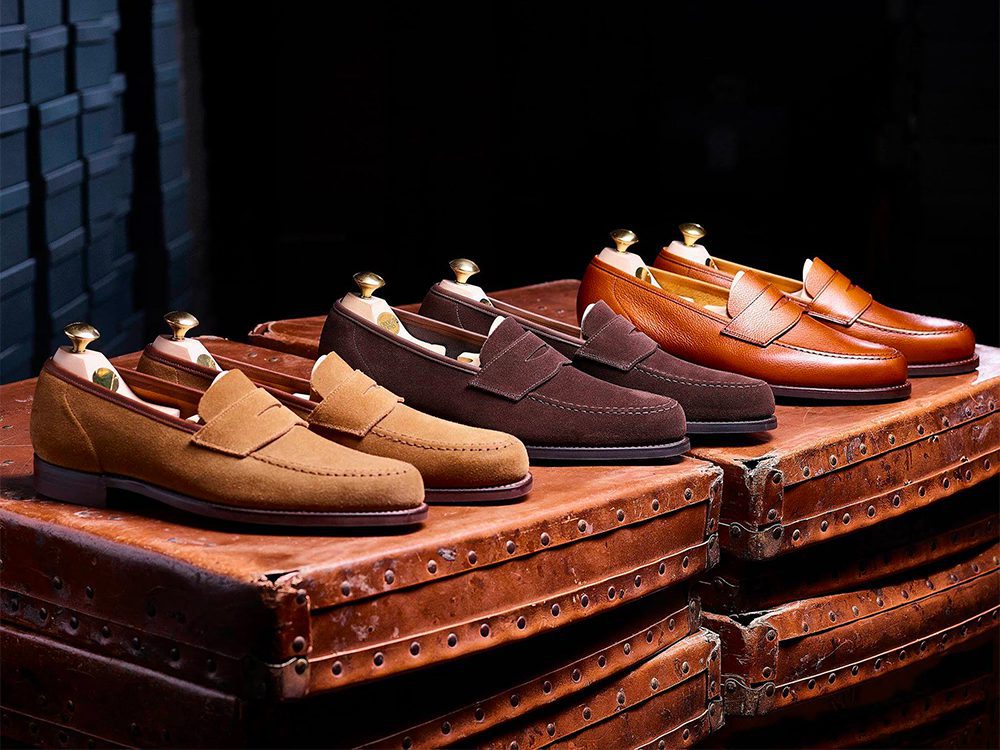 One of the main considerations when buying penny loafers is which finish to go for. The two main options are leather or suede, but as is usually the case with shoes it’s not quite as simple as that. You can pick from high-shine leather, softer waxy leather, fine nap suede or more durable roughout suede, to name but a few.

Which material you go for is largely down to personal preference, but it also depends on when and where you intend to wear them. Glossy leathers tend to be more formal, so if you want to wear your pennies with a lounge suit, this is your best bet.

If your style leans more casual, you might want to consider a duller, waxier leather, which better complements denim and cotton twill chinos. Likewise, suede is a more relaxed option, and one best suited to the warmer months of spring and summer, but it’s also worth remembering that it’s less durable than leather and will therefore age quicker. Penny loafers are most widely available in classic shades of black, brown and oxblood, although you can sometimes pick up suede versions in navy or stone for a summery twist.

As always with shoes, the darker the colour the smarter it looks, so for the most formal option go for black or dark brown leather. The former doubles up as the ideal finish to monochrome outfits, so if you want to complete an all-black outfit of a T-shirt, jeans and leather jacket, black pennies are the perfect choice.

A contemporary alternative to black or brown is oxblood, a colour which, in our option, excels in penny loafer form. In fact, it’s one of the only leather shoe styles – along with Dr. Martens boots – that suits the shade, so if you want to introduce variety to your shoe game, look no further. When it comes to classic penny loafers, G.H. Bass is the original and arguably the best. The brand’s founder introduced the shoe to the US in the 30s, kickstarting its widespread popularity, and it still makes the shoe to those same specifications today.

While the quality won’t quite reach the heights of those produced by high-end shoemakers, the silhouette, value for money and heritage of the brand’s ‘Weejun’ is hard to beat. Myrqvist prides itself on its quality construction and expertly sourced materials, so expect to find beautifully made, classically designed shoes from the Scandinavian shoemaker.

Its penny loafers are a case in point: sleek silhouettes and minimal detailing is married with the finest leather and suede, creating shoes that perfectly straddle the smart casual divide. 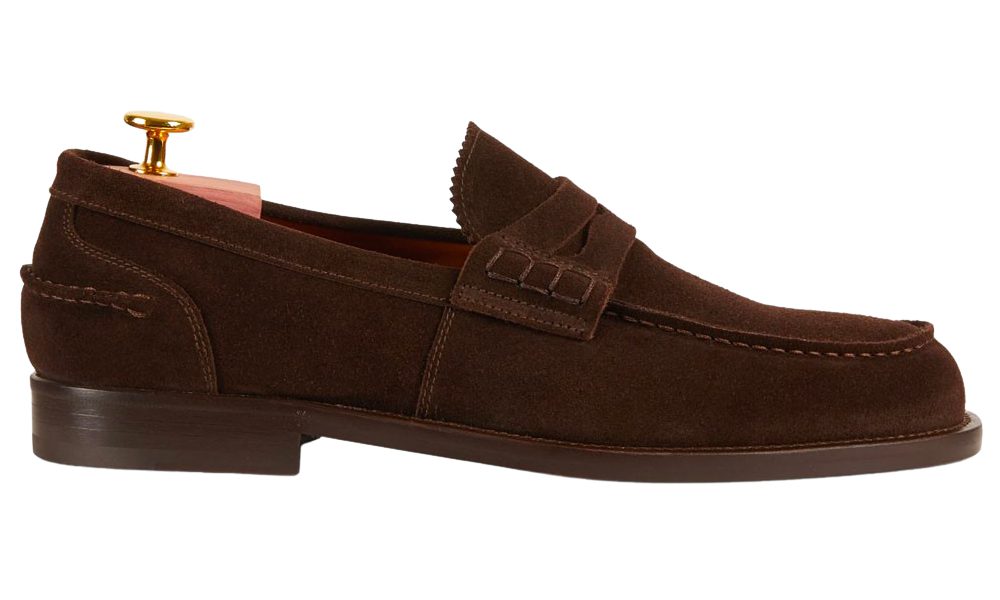 Although relatively new to the shoe game, Velasca has quickly marked itself as one to watch due to its commitment to exceptional design, quality construction and fair pricing.

It offers a wide range of loafer styles, including penny silhouettes inspired by the American Ivy League colleges of the 50s. 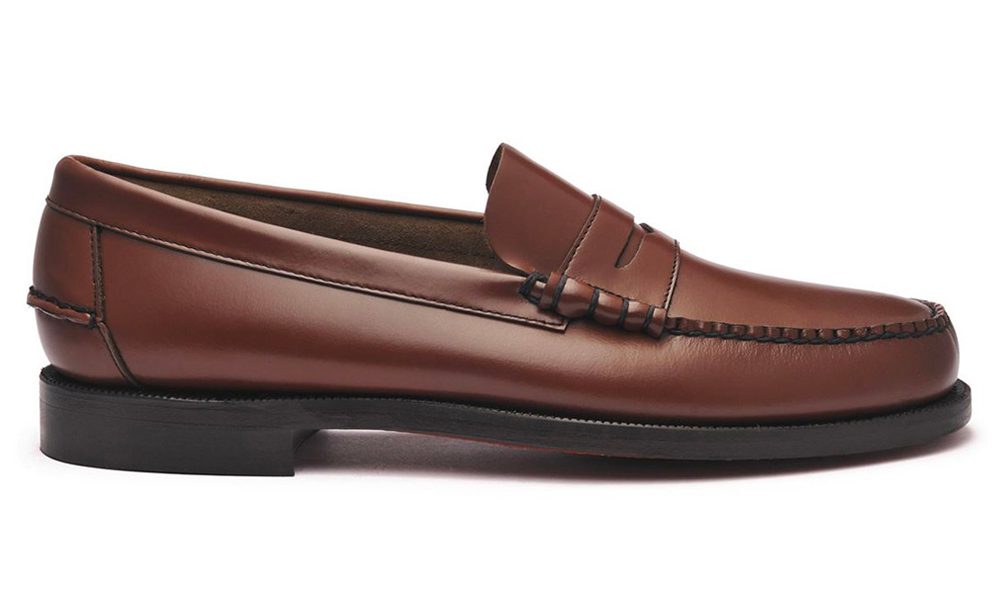 Established in 1946, Sebago is another American company with a rich history producing penny loafers. With handsewn construction and high quality leathers on offer, this is one of the best value for money brands you will find in the sector. One of the UK’s most prestigious shoemakers, Crockett & Jones has been manufacturing since 1879, and continues to produce shoes to the highest standards from its home in Northampton.

Today, you can expect the highest levels of craftsmanship and only the finest leathers and suede. These are penny loafers designed to last a lifetime. Another historic shoemaker, Alden was founded in 1884 in Massachusetts. Regarded as one of the USA’s finest, Alden’s reputation for crafting beautiful shoes extends to its range of penny loafers, which are constructed using the traditional Goodyear-welting technique, allowing them to be resoled over and over again, in the finest hides. A relative upstart compared to some of the names on this list, Duke + Dexter was founded in 2015 and prides itself on designing in London and producing its wares in the UK.

Its penny loafers boast clean design, rounded toes and soles which are neither too slim nor too chunky, making them ideal for wearing as part of a smart casual weekend look. Of the many elite shoemakers in the UK, John Lobb stands out. Its eponymous founder created it back in 1849, and each and every one of it shoes are still made today using around 200 individual processes.

Of course, you’ll have to pay for that level of craftsmanship and attention to detail, with the brand’s signature Lopez penny loafer costing over £1,000. Edward Green is yet another highly regarded UK shoemaker, which was birthed in 1890 in the Mecca of shoemaking, Northampton.

Its designs are classic and timeless, as you would expect, with its penny loafers sitting at the more formal end of the spectrum thanks to their slim lasts and refined detailing. The perfect finishing touch to tailoring. Distilling a touch of classic French elegance into the penny loafer is J.M. Weston. Since 1891 the luxury shoemaker has been hand-crafting the finest footwear from its own factory in Limoges, France, and today it even continues to tan its own leather.

The brand’s signature 180 Loafer is perfectly proportioned and available in a wide array of finishes, from classic black calf leather to nut brown lizard leather.

How To Wear Penny Loafers 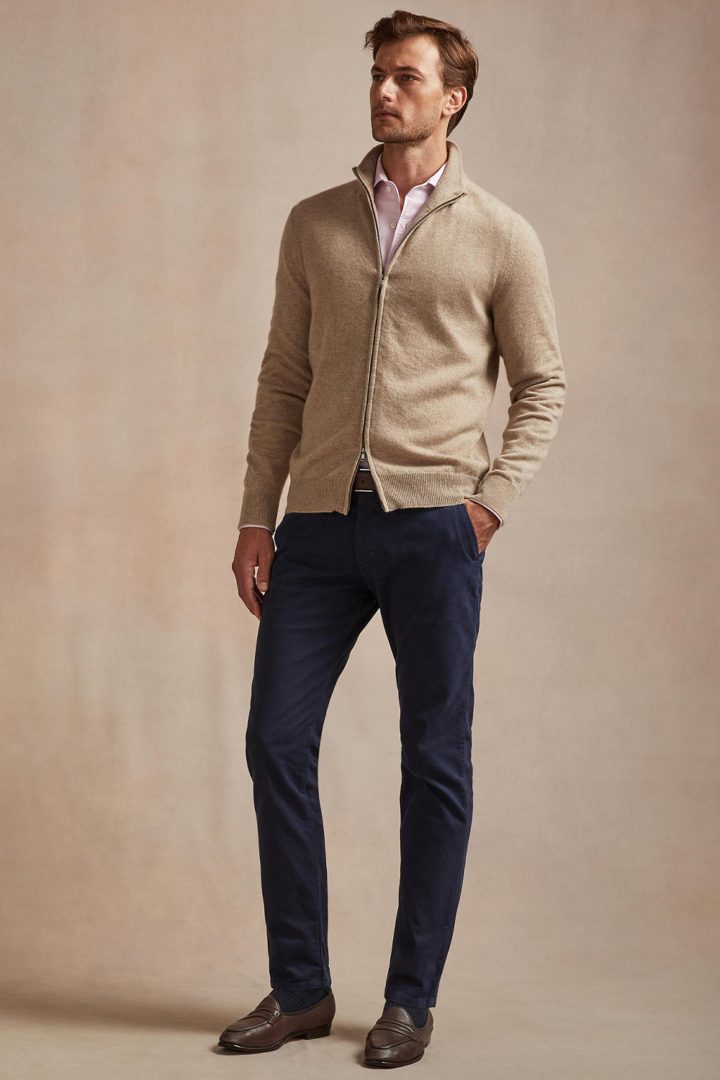 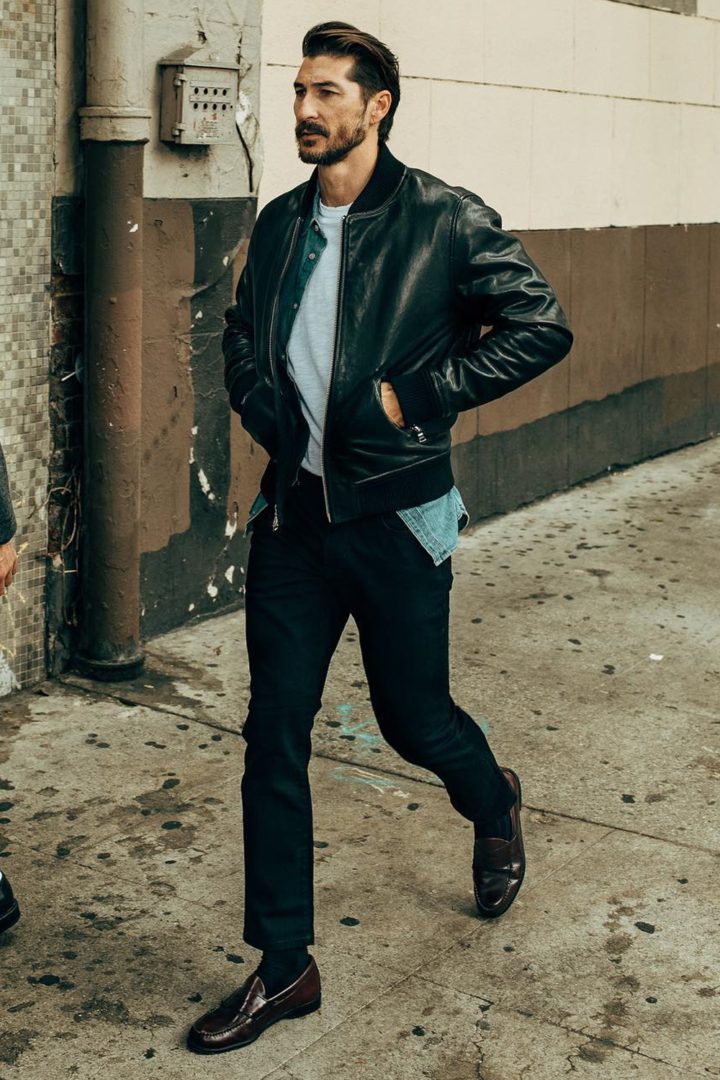 One of the main attractions of penny loafers is their versatility – they work with a suit just as well as they do with shorts and a T-shirt in summer. But you need to pick the right type.

As previously mentioned, smarter styles are slimmer in shape and feature more pointed lasts. While this style works well with tailoring, it’s too severe to combine with jeans or chinos as the contrast between smart and casual is too extreme.

Instead, take your cues from the Ivy League set of the 60s and opt for penny loafers complete with beef roll stitching and a shorter vamp, which give the shoe a more laid-back feel. The ideal accompaniment for a smart casual look, try wearing yours with raw denim and a knitted polo shirt.