The most arresting image of the shearling coat is, unfortunately, not its most effective advertisement. Only Fools and Horses’ Del Boy has cemented for many the relationship between the trusty sheepskin and market trading, a wide fluffy collar for the wide boy. If not him, the sheepskin was for many years a staple of football managers screaming from the sidelines during frosty winter fixtures, or of John Motson, a little cosier in his commentary box.

But what unites their appreciation for the sheepskin coat – more widely known as shearling, a coat that’s been made from sheepskin, tanned and dressed with the wool left on as its natural lining – is the fact that few winter coats, outside of the highly technical ones, are quite as warm. Seriously warm, in fact. And, often, since so much work goes into making said coats, seriously expensive. The same idea was not lost on the aviators of World War Two. Undoubtedly more stylish, if only for its more macho associations, the flying jacket associated with The Few of the Battle of Britain – all outsized and belted up over those RAF blues – was also a shearling jacket, its exterior tanned and polished to a sheen, but the fleecy interior and huge collar retained. Before the advent of electrically heated flying suits, a jacket like this one literally kept you alive at altitude, as was the intention of its designer, one Leslie Irvin, who also invented the parachute ripcord system.

Those of a less patriotic bent might suggest that it was the USAAF – the US wartime equivalent of the RAF – that wore the style best, with its B-3 model, complete with various waist and cuff adjustors, zips and pockets, and sometimes made from untreated raw white sheepskin. It became an icon of military clothing. The model had been standard in the USAAF since 1934 and such was its success it was still being worn well into the 1950s, when packing more technology into a cockpit – and a new wave of synthetic fabrics – made its bulkiness impractical. Not that it was a new idea for either side of the Atlantic – Iron Age man wore sheepskin coats, which had their moments of high fashion during both the Medieval, Tudor and Victorian periods. Marlon Brando wearing a shearling jacket in On The Waterfront (1954)

But, of course, the warmth of the sheepskin or shearling coat is just one of its benefits. It’s the style that really sells it in these centrally-heated times – which is also why, for ethical reasons, many modern interpretations are faux shearling, with the best examples looking just as good. Levi’s classic trucker jacket with sherpa collar – sherpa being a kind of synthetic, wool-look polyester fleece – is a case in point. Plenty of brands, from Zara to AMI, YMC to Stella McCartney, have rightly ridden this horse.

Not for nothing did Skinheads – that austere style tribe spin-off from Mod – make a sheepskin their go-to winter outerwear, when the cropped 501s or Sta Prest trousers and Doc Marten cherry reds kept the winter out, but that MA-1 bomber jacket really didn’t. Worn over button-down gingham shirt and braces, the sheepskin looked its best. The various panels that come together to make a sheepskin coat – as yet sheep big enough to provide a skin sufficient for an entire coat alone has yet to be born, though genetic tinkerers are no doubt working on it – have to be stitched. And a good example is sewn with a precision flat stitched seam which is so flat that the coat can be worn reversed, albeit at risk of looking something akin to a yeti. Perhaps this is why, despite lighter, warmer, more compact and ethical man-made alternatives today, the sheepskin coat endures. Look at Marlon Brando with his shearling collared jacket in On the Waterfront or James Dean’s ranch coat in Giant. Or, more market-trader-meets-hoodlum style, look to Steve Buscemi in Fargo or Ryan Gosling in Blade Runner 2049 (yes, even 30 years from now they’re still wearing them).

Seeing as a shearling jacket is an investment purchase, before parting with your hard-earned cash it’s wise to consider the following. Funnily enough, you don’t get much in the way of slim-fit shearling. This is hefty outerwear with a chunky silhouette and big lapels or collar. You feel the weight of it when you wear it. If you normally buy a size up with winter coats to slot a knitwear layer underneath, consider how skinny your legs will look before you head to the checkout. Short, stocky guys are advised to go for a long overcoat rather than a cropped boxy jacket for similar reasons. 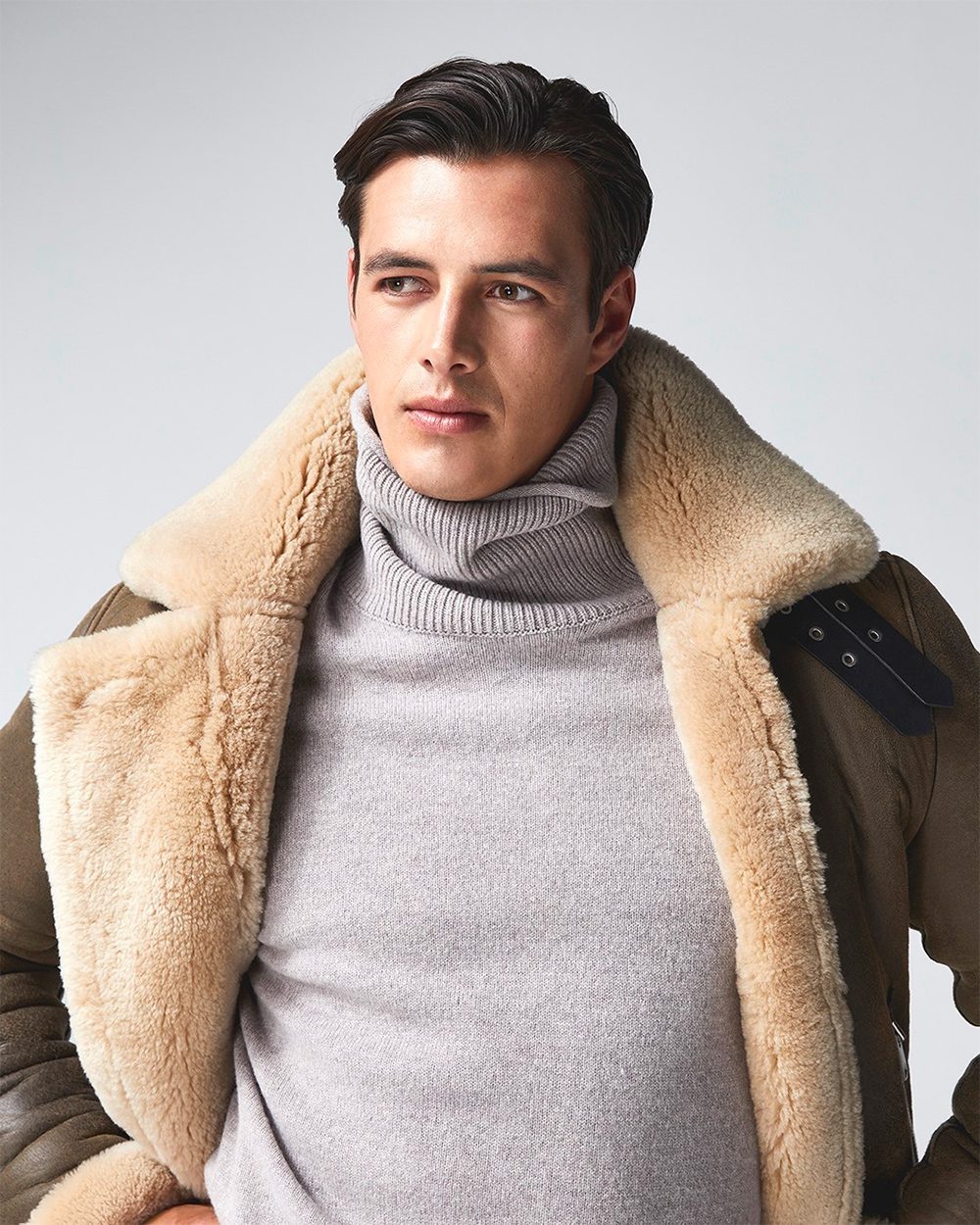 In recent years, flight jackets have been the most common shearling coats, possibly to the point of overexposure. They’re masculine, practical and style up or down quite easily. Shearling or borg truckers are more casual – think that Brokeback Mountain, winter-in-Wyoming kind of aesthetic. Longer shearling styles include dusters and overcoats, but you’ll also find the odd shearling parka or trench coat. They all have a certain decadence about them, not least because of the number of digits you’ll find on the price tag. 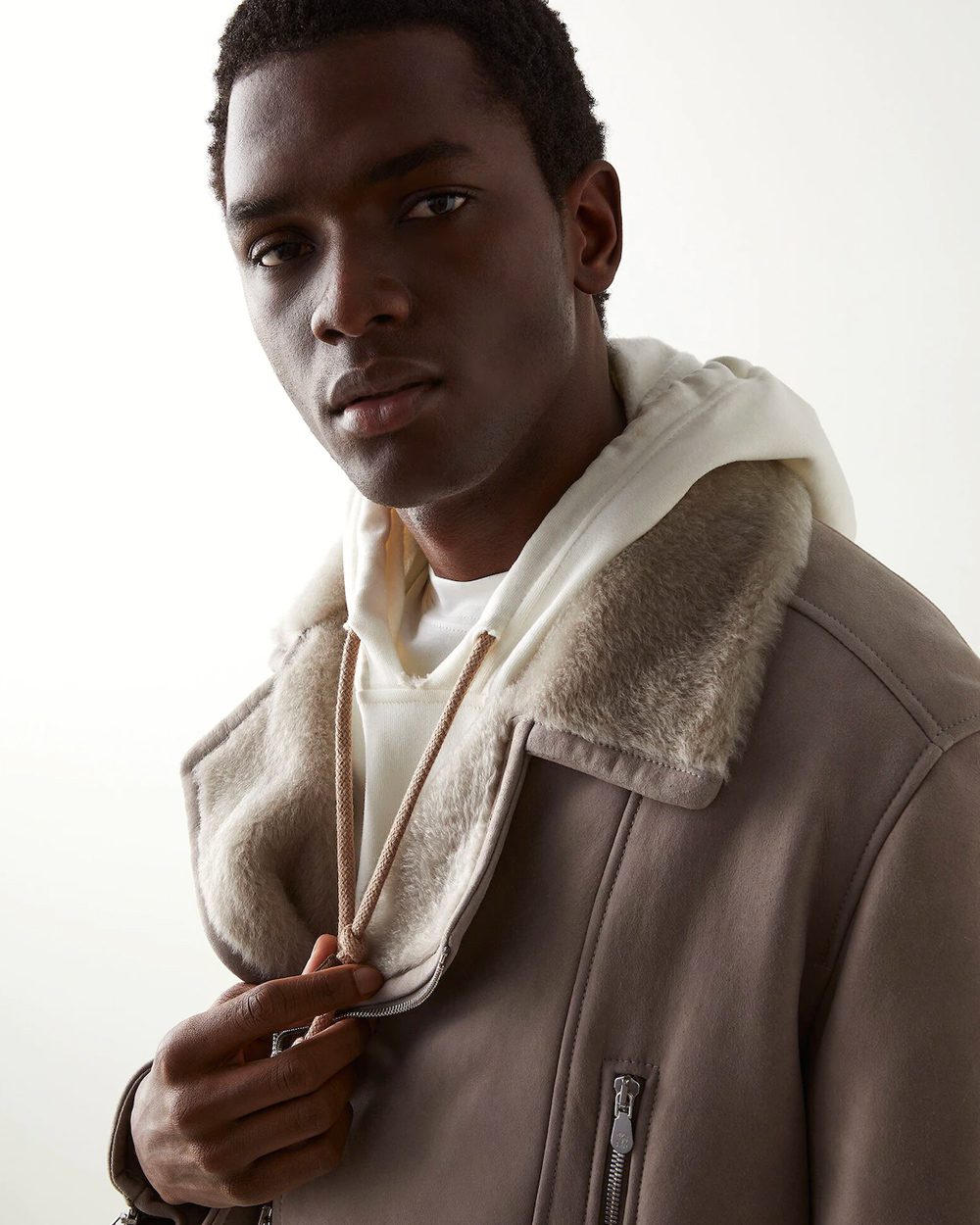 There’s a complicated conundrum around what constitutes ethical fashion these days, and it comes up when you’re shopping for shearling. Some conscious consumers refuse to buy the real thing on the grounds of animal cruelty. But if you go for borg, the vegan alternative, then you’re likely buying petroleum-based polyester, which may not last as long and sheds microplastics. Only you can decide what the right option is. Tan-coloured shearling is the most natural and common style you’ll see, but it does come with those Del Boy connotations. Black is a smart alternative, especially on a flight jacket, but don’t discount chocolate brown or even the occasional navy or green. A contrast lining or collar in white sheepskin leans traditional, while a lot of modern styles have the lining dyed to give a tonal look.

Now you’ve figured out exactly what type of shearling jacket you want to buy, here are the brands you should be looking at.

Closed originally started as a denim brand in the late 1970s but has since progressed into a fully-fledged fashion label with both men’s and women’s lines… and some of the nicest shearling outerwear around. The brand uses Spanish lambskin to make its shearling coats and jackets, with designs ranging from classic bomber and aviator styles to parkas. But whatever the style, expect these jackets to be warm, soft, comfortable and stylish.

Sitting at the premium end of the high street, Reiss have built a reputation for producing high-quality, affordable leather jackets, and their shearling versions certainly don’t disappoint. Releasing a small, curated line each autumn/winter, you can expect buttery-soft sheepskin in a wide range of colourways and classic silhouettes, from aviators to truckers, brought bang up to date via contemporary detailing and design elements.

Leaning hard into the Del Boy aesthetic is east London’s Percival, a brand with a track record for taking classic menswear items and giving them a contemporary twist. Its Marshal jacket is a heavyweight shearling with a button-up front, revere lapels and a rich tan colour. Lovely jubbly. It also does an excellent Aviator style which, like the Marshal, is made in London.

Schott NYC started out supplying bomber jackets to the US Air Force in World War II before shooting to fame after Marlon Brando donned its Perfecto biker jacket in seminal film The Wild One. Widely considered the ultimate leather outerwear brand, the American company offers shearling versions of all its classic models including the B-1, G-3, trucker and biker.

The shearling jacket was a natural progression for a brand that made the leather biker an integral part of its collections during Hedi Slimane’s tenure. The designer may have since left the company but his trademark aesthetic remains, with Saint Laurent’s designs oozing rock ‘n’ roll swagger.

Known for crossing between the realms of culture, art and fashion, Acne Studios’ experimental twist on Scandinavian style has earned it legions of loyal followers across the globe. Its shearling outerwear stays true to form, with the Swedish label giving this age-old silhouette a contemporary update via colour, shape and detailing without straying from its minimal design ethos.

If money is no object and you’re looking for a true investment piece, Brunello Cucinelli offers some of the most luxurious shearling jackets and coats on the market. The highest quality sheepskin is complemented by premium details such as cashmere trims and subtly engraved hardware to create a superior product. Expect to pay upwards of £5,000 – but they’re worth every penny.

The preppy stalwart offers a superb range of authentic Americana workwear via its RRL sub brand, with shearling outerwear taking pride of place. Expect classic, masculine shapes including the trucker, bomber and ranch jacket that will slot straight into your weekend wardrobe. Meanwhile, Ralph’s Purple Label line offers high-end versions in sleek shapes that ooze luxury – and have price points to match.

This French tannery makes some of the best leather jackets around, and small wonder given its history – Lindbergh wore a Chapal jacket for his trans-Atlantic flight; and Chapal invented a lamination process by which sheepskin coats can be waterproofed. But expect to pay: its B-3 is €5000.

If you want a B-3 gilet or a sheepskin duffle coat, this family firm could be the place to come. BSC grew out of the once major sheepskin industry of Somerset, which sadly went into rapid decline in the early 1980s.

This company has rightly won a reputation for making some of the best military reproduction jackets on the market, and its sheepskin designs are no exception. Its B-6 is a more toned down version of the B-3, best teamed – at least for the adventurous – with a pair of A-3 sheepskin trousers. 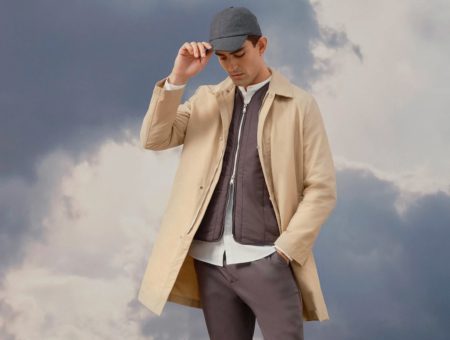 Return Of The Mac (Coat): The Best Raincoat Brands For Men 12 Fashion Essentials All Men Should Own For Fall 2022