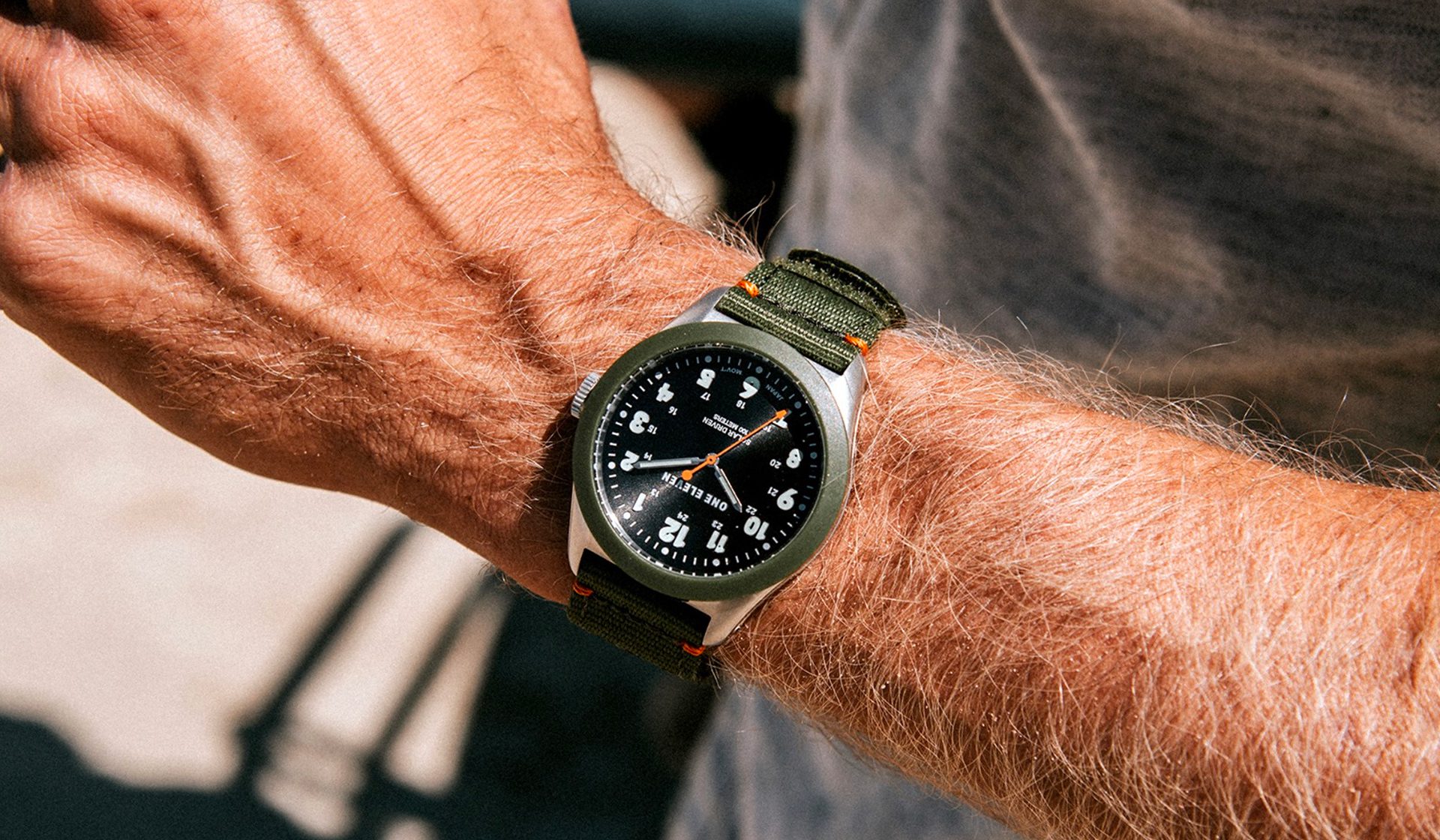 Despite their name, solar powered watches can seem like a bit of a mystery. Light goes in, something happens and you never have to charge it again. To paraphrase Leonard Cohen, this isn’t about how the light gets in, but where. And what does it do when it gets there?

Who Invented The Solar Power Watch?

First, a bit of history. The bets would have been on Seiko to launch the first solar powered watch, especially after its success with the Quartz-Crisis-causing Astron. However, it was actually a semiconductor company that got there first called Ragen.

The watch was made by the inventor Roger Riehl and named Sychronar 2100, because it was programmed to keep the correct date until 2100 taking into account leap years and Daylight Savings Time adjustment. It was an LED watch with solar cells built on to the top of the case.

Next up was Citizen, which devised the first analog solar powered timepiece in 1976 with its Cryston, powered by four cells that were mounted on the dial.

Seiko was rather late to the party, launching its version in 1977. However, it made up for it in 2012 when it became the first brand to create a GPS solar powered watch, the GPS Solar Astron.

How Do Solar Powered Watches Work? Before the how, you need to understand the whats that go into solar cells. The most important ‘what’ is the photovoltaic (photo-light, voltaic – electricity) cells, which convert light energy into electrical energy. These cells are invariably made from silicon – a semi-conductive material, which is used to convert sunlight into electricity – while the photovoltaic (PV) cells turn photons into electrons.

In a PV solar cell this silicon is usually in the form of modified crystals and chemicals are added to the cell in order to create a pathway through which the electrons can flow; this flow is called DC current. A semiconductor has specific characteristics necessary for the flow of electrons – it is part way between a conductor, which presents very little resistance to the flow of the electrical current and an insulator, which blocks it completely. Now for the science bit. When a photon particle from sunlight hits the cell’s surface, this absorbed sunlight dislodges electrons from the silicon atoms of the cell. This makes them excited, causing them to be released from their parent atoms, which in turn moves them into a higher valency – a state that makes them more reactive. These overexcited electrons are eventually kicked out of the atom, which allows them to freely roam around the semi-conductor. This ejection creates a hole, which, if this occurs in an electric field will cause the electrons from one silicon layer to move into the holes in the other layer.

If you connect these two layers with metallic wire, the crossing between the two, at a point known as the depletion zone, creates a flow of electricity. In a watch, this electrical energy is passed into the battery, where it is slowly released.

Now you know the hows, here are the solar powered watches worth considering. There is a real lack of luxury solar powered watches around. It’s possible watch brands don’t think them worth the R&D budget, but they are willing to mess about with NFTs so who knows what the criteria is for worthwhile investment.

Cartier is the exception, because it brought this excellent option to market. That Cartier decided to make one of its most iconic designs, the Tank, solar powered shows it obviously thinks there is merit in the technology.

It doesn’t look any different from a mechanical Tank and only a microscope would reveal the perforations on the Roman numerals that allow the light to reach the PV cells underneath. The technology was four years in the making, which has led to speculation that other Richemont brands might soon be going solar. Timepieces that are radio controlled are designed to receive a time signal to keep them accurate via radio transmitter. Because radio reception works nationally, Junghans Mega watches only worked in Europe, the UK, the US and Japan, or regions that are radio controlled. That has been fixed with the creation of a smartphone app, which will broadcast a time signal, allowing the watch to work anywhere in the world.

The movement also has an Advanced Moving Function, which starts the hands moving a fraction of a second before the step in time so the watch shows the correct current time rather than being fractionally behind. And then there’s the Intelligent Time Correction to analyse the position of the seconds hand 1,440 times a day, and once a day for the hour and minute hands, in comparison to the radio signal.

There’s a perpetual calendar too, should all that not be enough. Not a brand that is probably on many radars but one that is entirely built on solar powered watches. Whereas a lot of companies lean into the technological aspect of having a PV cell-powered timepiece, creating designs that look hypermodern, One Eleven has gone retro with this particular piece.

It looks like a classic military watch with its bold, luminous numerals, inner 24-hour ring and material strap. But for One Eleven it’s not just design that’s important, it is also a brand built on sustainability. It uses recycled plastics and steel for its cases and straps, the packaging is recyclable and uses biodegradable inks and, as a 1% For the Planet partner, 1% of sales goes to environmental causes. So, you can look good, while doing some good. It could have been dismissed as a pointless gimmick when it came out in 1999, but Japanese watchmaker Tissot’s T-Touch technology foreshadowed Apple Watch’s haptic interface by six years. Now it’s gone solar.

Because Tissot wants you to see this as a timepiece first and foremost, it has two modes: ‘watch’, when it’s not connected to your phone; and ‘connected’, for when it is. Watch mode gives you a perpetual calendar, second time zone, countdown timer, alarms, chronograph, compass, as well as the activity tracker with accelerometer. Connect it and you have the internet at your fingertips.

The watch is charged via tiny solar sensors on the dial, and it needs just seven minutes in sunlight to be fully charged for a whole day. Despite being stuffed full of electronics, it is also good to 100m, so you won’t get a nasty shock when you jump in the pool. 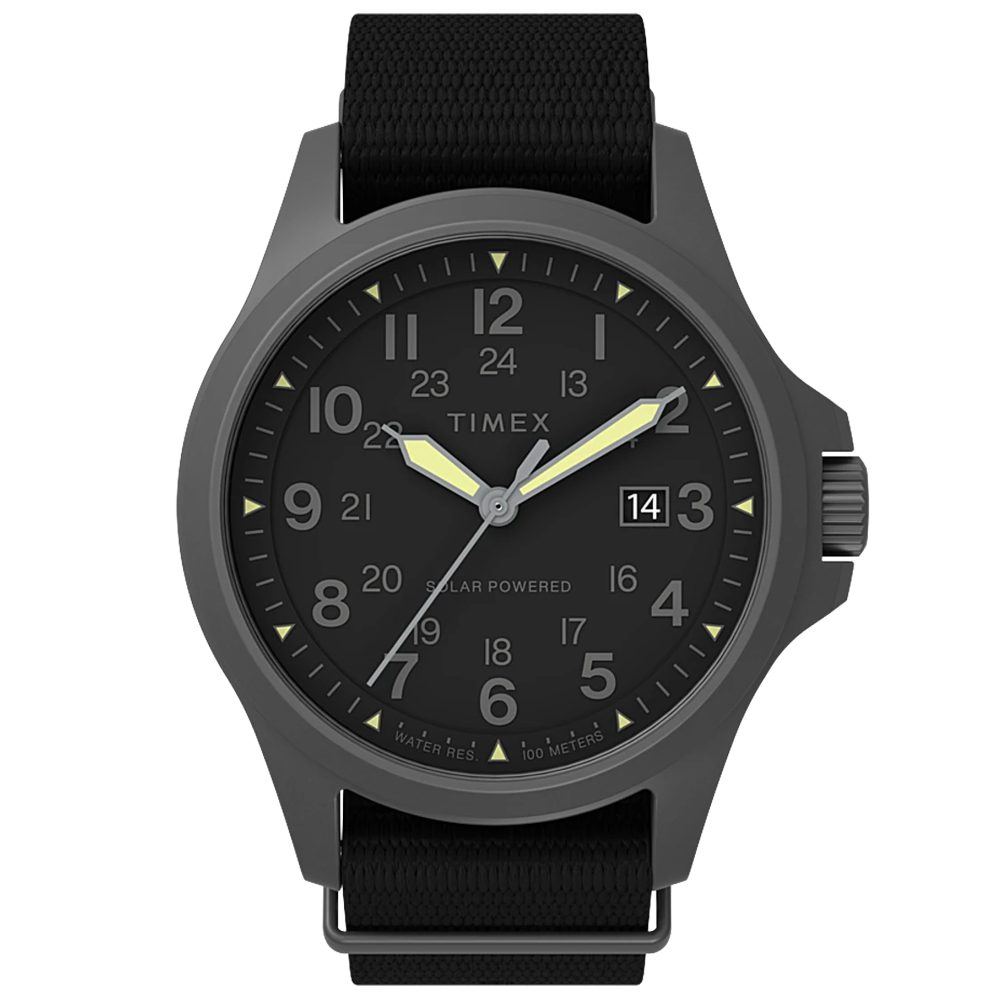 Although Timex’s military contract was rather short lived – about a month between February and March 1982 – that hasn’t stopped it making military-inspired timepieces, such as this. For something that’s solar powered, Timex has really gone all-in on the dark shades here. With slate-grey numerals and a matte black dial, the only thing that brings any brightness to the dial are the tiny luminescent hour markers and the hands.

Keeping the lack of colour theme going, the strap is black and made from recycled plastic. Though if you do want to jazz this timepiece up a bit, it is also interchangeable. Seiko managed to get its face in quite a few of the 1980’s most iconic films. It was on Ripley’s wrist when she landed on LV-426; the Ghostbusters gave them a call in 1984; and Doc Brown took it back to the future. However, one model – the Prospex H558 – became associated with the decade’s most famous action hero, Arnold Schwarzenegger. Worn in both 1985’s Commando and 1987’s Predator, this analog-digital dive watch was so synonymous with the star it now bears his name.

For 2019, it was updated with a solar powered movement, the ability to set a second time zone using the digital display for the local time, and a battery check system. It also has a dive bezel and a water resistance to 200m.

At 47mm, it’s certainly not delicate but when you’re stalking technologically advanced aliens in the Central American rainforest, it’s exactly what you need. No brand is more associated with solar power than Citizen. It’s been making them since the 1970s and its Eco Drive collection is the one for which it is best known.

In 1995, Eco Drive 7878 advanced the possibilities of solar powered designs by becoming the first light powered movement with the PV cells mounted under the dial. Previous iterations of solar watches had them on the dial, but improvements in thin amorphous silicon solar cells changed that. By making the dial translucent, the now more-effective cells could be easily charged.

While Eco Drive watches tend to be chunky, tech-heavy designs, this Corso shows Citizen can also do elegant. The aesthetic here is very much classic with a twist, with the lushly verdant dial adding flair to a quintessential men’s everyday timepiece.

It’s the type of watch to take you from boardroom to bar to weekend away. With the added bonus of never needing a battery change.