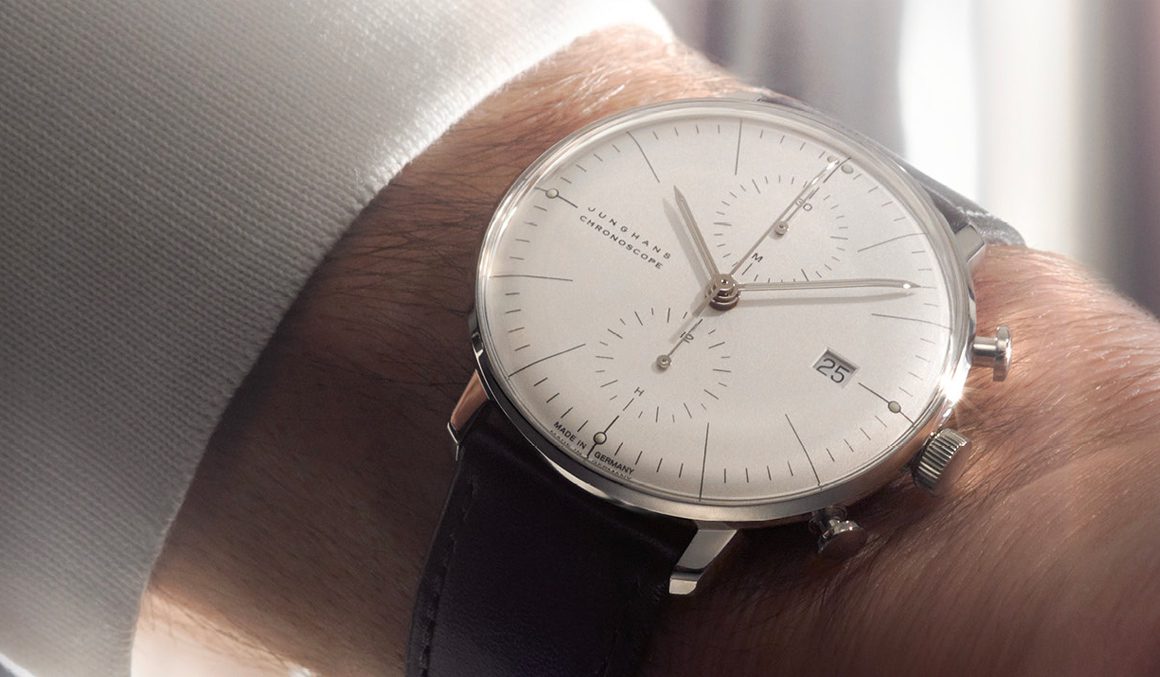 Let me tell you a secret: watches don’t need to be expensive. I know, shock horror, barbarians at the gates of Geneva! Sure, fine watchmaking is expensive; they’re finely-tuned mechanical marvels with plenty of gold, guilloche and grandiose design elements to match. But “fine” watchmaking isn’t all there is.

Everyone aspires to a Ferrari 488 (or I do at least, you can shove your Lambo) but that doesn’t mean there’s no place for the insanely fun Focus RS or an ever-handsome BMW. It’s the same with watches. You might not be able to afford a Greubel Forsey, but it doesn’t mean you can’t have yourself some decent wrist candy.

Here, then, are five watches that you don’t need to break the bank – or even really dip into your drinking money – to make your own. If you’re obsessed by the clean, Bauhaus look that defines Nomos Glashutte but don’t fancy the prices that the tiny Saxon village commands, look no further than Junghans. They have enough minimalist aesthetic to charm an architect, especially in the fittingly-named Max Bill collection.

In case you’ve never heard the name – and I wouldn’t hold it against you – Bill was a renaissance man of architecture, typography, art, design and anything visual. In fact, the charming, semi-industrial font used on the watch is his.

There are automatic and manual versions of the watch, as well as the seriously cool Chronoscope, but for our sub-£500 purposes the quartz version is your friend. After all, what’s more Bauhaus than being more accurate, practical and unfussy as a quartz movement? Full disclosure: I own a couple versions of the Khaki myself and may well pick this one up at some point soon. Based on a 1960s Hamilton that was in turn based on the famous A-11: the WWII model dubbed the “Watch that Won the War”. It’s pure military. This is a watch that was designed to have the living hell beaten out of it and come through the other side – and it shows.

The dial is easy to read at a glance, even going so far as to show all 24 hours, and the case is as robust as a 38mm piece can be. That size is small compared to some brands but given the slant towards smaller watches at the moment it’s on point. It’s finished with a canvas NATO strap, the kind that never seems to wear.

In short, you’re paying under £400 for a cool, contemporary take on a classic with a mechanical movement. That’s a damn good deal. A dress watch needs to be gold, which means keeping things under £500 can be difficult. Even plated tends to push the price up. And if you’re after a mechanical movement – good luck. Or, you know, just look at About Vintage. Their 1820 Automatic in on-trend rose gold is pretty perfect.

Named after the year Thomas Prest filed the patent for the first self-winding movement – a little bit of horological trivia that has no impact whatsoever on the watch – the 1820 is what happens when the Danes start designing watches. It’s clean without being too minimal, simple without being unrefined and could pass for something many, many times the price.

Not that it’s not a decent watch in and of itself of course, it’s just that if you’re in need of a dress watch you’ll be seeing some serious timepieces out there; just because you’re buying cheaper doesn’t mean you want to look like it. I’m almost getting tired of including Seiko in anything to do with affordability but dammit, they need to be there. Take this, for instance: a black-on-black version of the Japanese watchmaker’s famous Turtle diver, it’s one of the coolest, most affordable diving watches out there, especially if you’re looking for something a little out of the ordinary.

It takes its name both from the oddly charming shape of the case and its stealth makeover, but there’s more to it than that. From the unusual crown at 4 o’clock to the signature rubber strap, it’s a lot more interesting than the usual array of Submariner rip-offs.

If there’s one downside it’s that 200m resistance isn’t technically professional standard (that would be 300m), but at this price point it’s pretty easy to replace if you do go a little too deep. That is, if you can get hold of it. This little diver has got one hell of a following right now. Yes, that Victorinox – the company with the toothpick-sporting Swiss Army knives. As well as tools to keep scout troops enamoured, they make some of the most hardwearing watches out there. They can survive being crushed by tanks. They’re hardcore. However, this is more on the sporty side of things – in fact, it’s one of the best priced racing watches out there.

What makes it a racing watch? The tachymeter, the outer ring used to measure speed if you know distance (whatever the length of a lap is), and the time taken (hence the chronograph). That’s all. This particular watch is dressed in black as shorthand for that petrolhead, performance look, with a few flashes of red for much the same reason.

It has a quartz movement, which isn’t a surprise; you can’t really expect to get a decent mechanical chronograph for under £500. Even if you do, it’s not going to be quite as cool as this.