In conversations about on-screen style, one name always crops up more than any other: James Bond. The fictional intelligence officer is famous for his razor-sharp formal attire, effortlessly cool casual clothing and hair-raising swimwear. His name is synonymous with black tie, fine timepieces and general debonairness, and his status as a style icon is sewn into the very fabric of menswear itself.

Every men’s style aficionado has their favourite Bond era, from Roger Moore’s fashion-forward take on 007 to Connery’s classic tailoring. But, for us, it’s incumbent Bond Daniel Craig’s wardrobe that really stands out. It’s refined yet relaxed, timeless yet modern and plays host to some of the most respected designer names in menswear.

But what are those names? Here we delve into the wardrobe of Daniel Craig’s Bond and reveal his go-to labels. From modern tailoring courtesy of Tom Ford to formal footwear from Crockett & Jones, these are the current 007’s favourite brands. 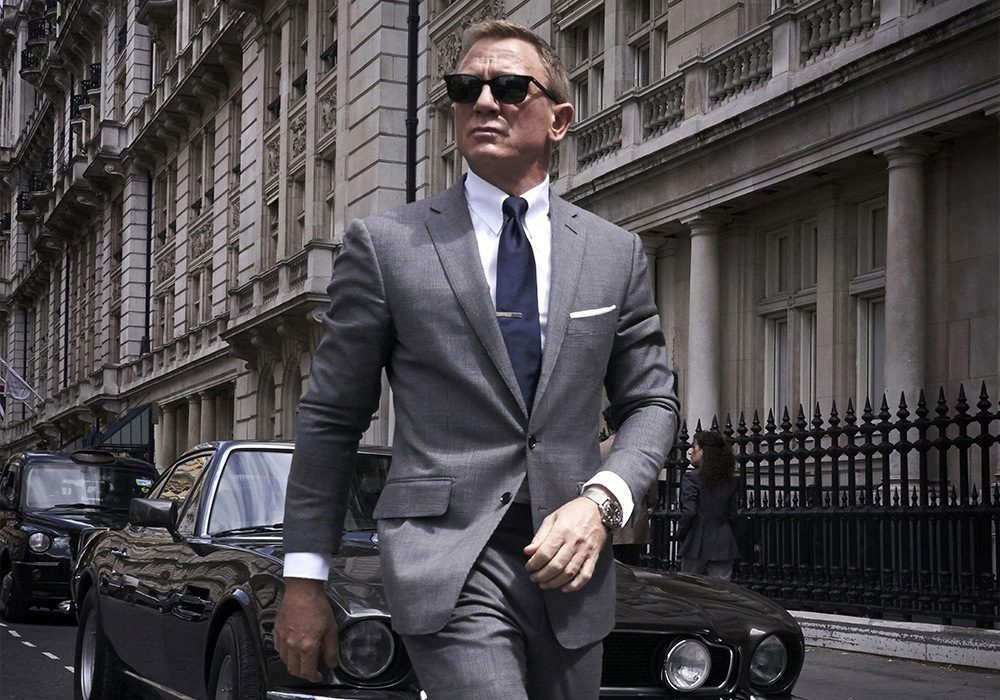 If there’s one label that will be looked back upon as the one that defined this era of Bond, it’s Tom Ford. The American designer’s razor-sharp, modern suits have become a trademark of Craig’s Bond, in addition to everything from sunglasses to casualwear.

No Time To Die will be the fourth consecutive film in which 007 is dressed by Tom Ford, with the esteemed designer working closely with the movie’s costume designer to create bespoke garments for the man himself. 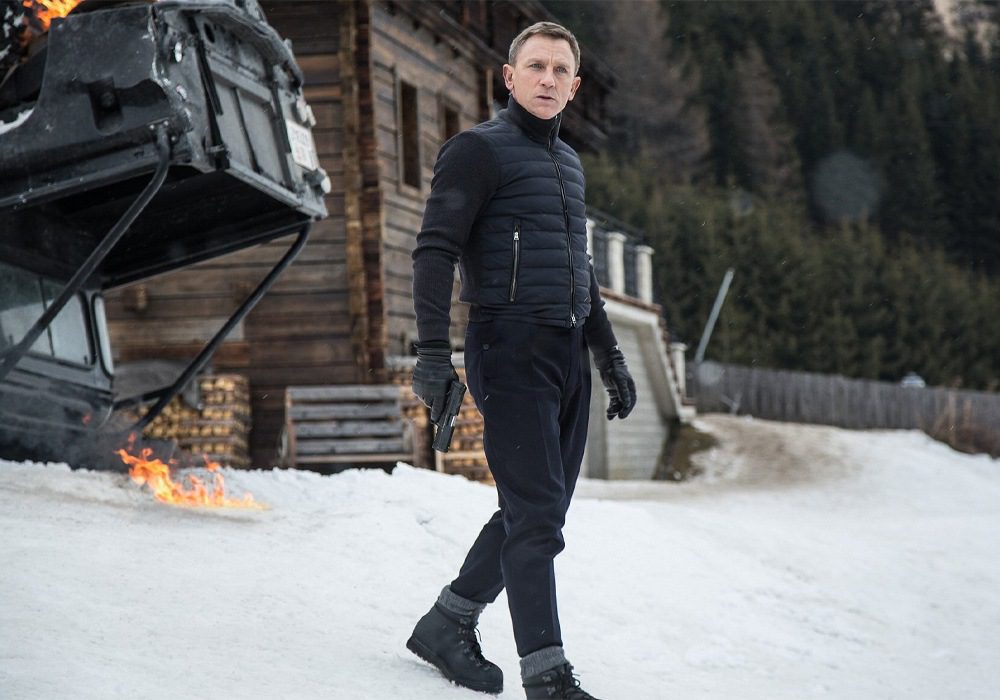 Danner’s boots have only cropped up once on the feet of Bond to date, but they’re set to make another appearance in No Time To Die. Craig wore the Oregonian brand’s Mountain Light II hiking boots in scenes in the Austrian Alps in SPECTRE and dons a pair of black Danner tactical boots in the upcoming film.

Danner has been making some of the best hiking, work and military boots in the game for just shy of 100 years, making it an obvious choice for 007. 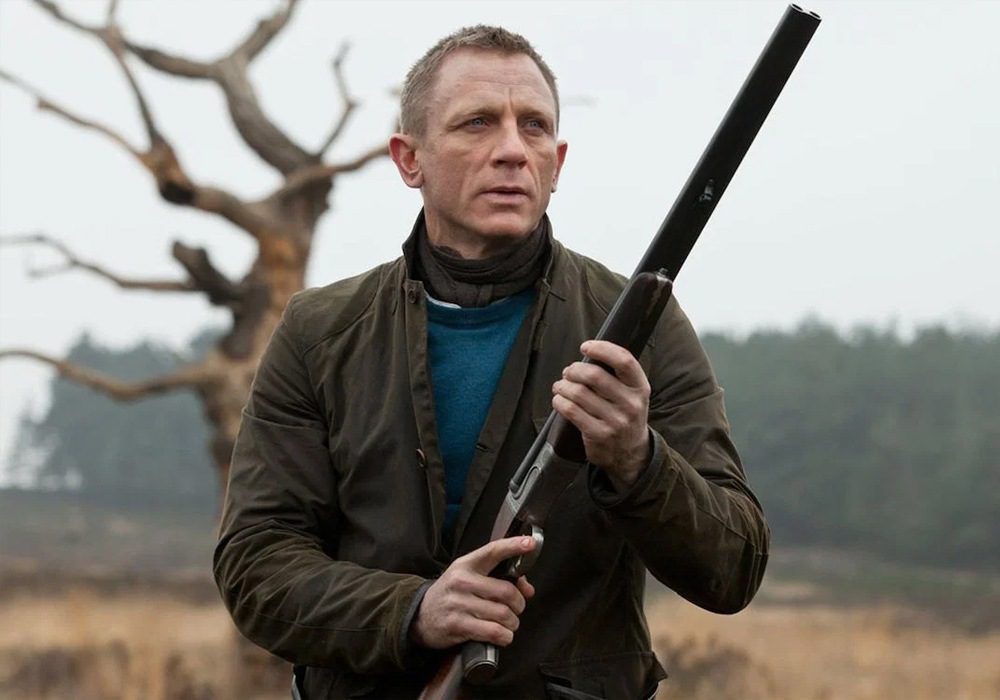 Bond wears outerwear from British country-attire brand Barbour in two of Daniel Craig’s films. In Skyfall, that takes the shape of a Beacon Heritage Sports Jacket from the Barbour To Ki To line, created by Japanese designer Tokihito Yoshida. Bond can be seen wearing the jacket while shooting in some of the Scotland scenes.

In No Time To Die, he wears the Graham jacket in navy waxed cotton from a collaboration between the Newcastle-based brand and Engineered Garments. Craig-era Bond is well known for his skimpy swimwear. His Orlebar Brown swim shorts may not be his most iconic pair (that title is reserved for the famous side-striped La Perla ones that will be seared into the minds of all who witnessed them for the rest of time), but they’re our personal favourites.

The exact model is the Orlebar Brown Setter and they can be spotted on Bond in the hotel-pool scene in Skyfall. British label Sunspel is Bond’s brand of choice when it comes to basics. Whether it’s a plain T-shirt, a polo shirt or a long-sleeve tee, if Daniel Craig is wearing it on the set of a Bond film, chances are this is where it came from. 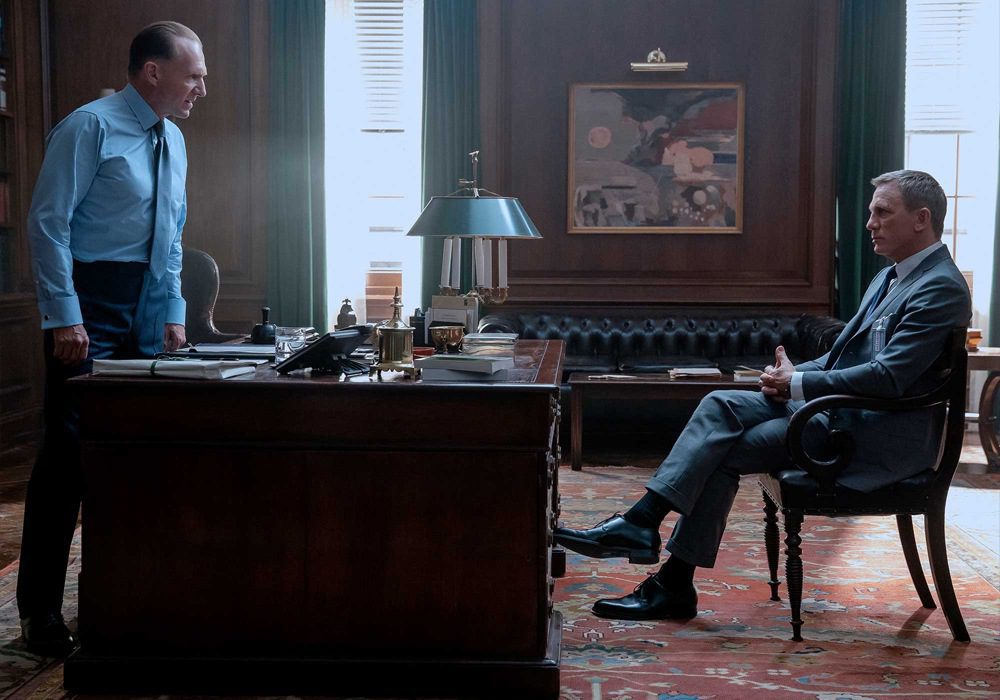 Most of Bond’s formal shoes are made by Crockett & Jones, apart from the occasional pair of Church’s in Quantum of Solace. When it comes to smart footwear, Bond has always favoured his classic Northamptonshire brands and Daniel Craig has kept that tradition alive and well.

No Time To Die will be no different either, with the brand having supplied a number of styles for Bond to wear on-screen, including the Highbury Derby shoe, which has previously cropped up in Skyfall. 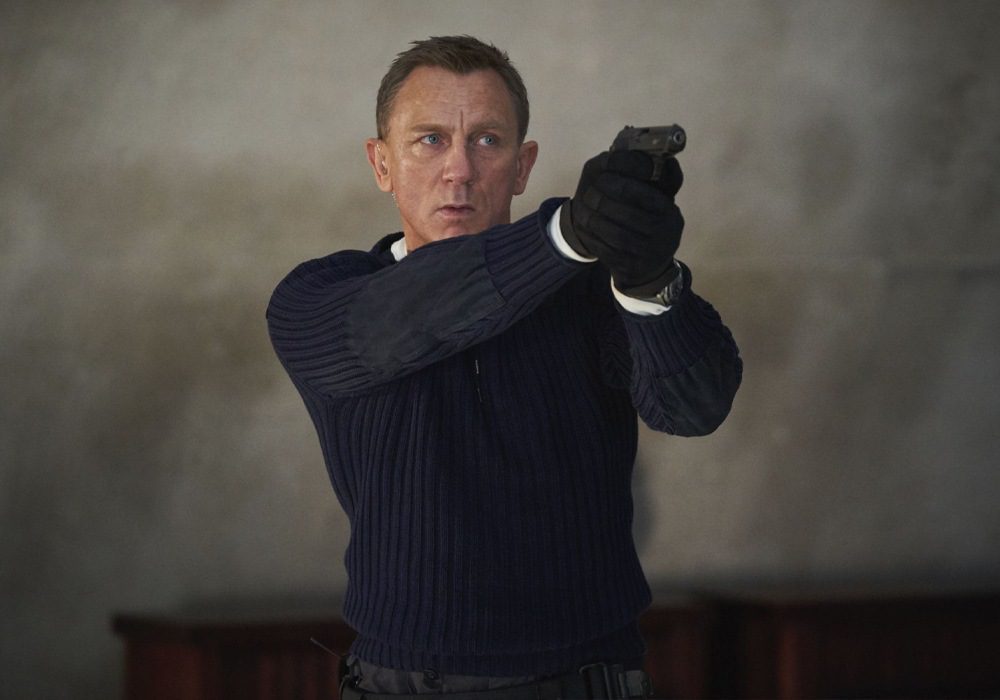 John Smedley has historically been Bond’s knitwear brand of choice, but Craig’s Bond has more of a soft spot for N.Peal. The British cashmere label’s pieces are seen in most of his films, although he does wear a Smedley V-neck briefly in Skyfall.

The brand can be spotted in Bond films dating all the way back to From Russia With Love, but Craig’s Bond wears it almost exclusively when it comes to knitwear. 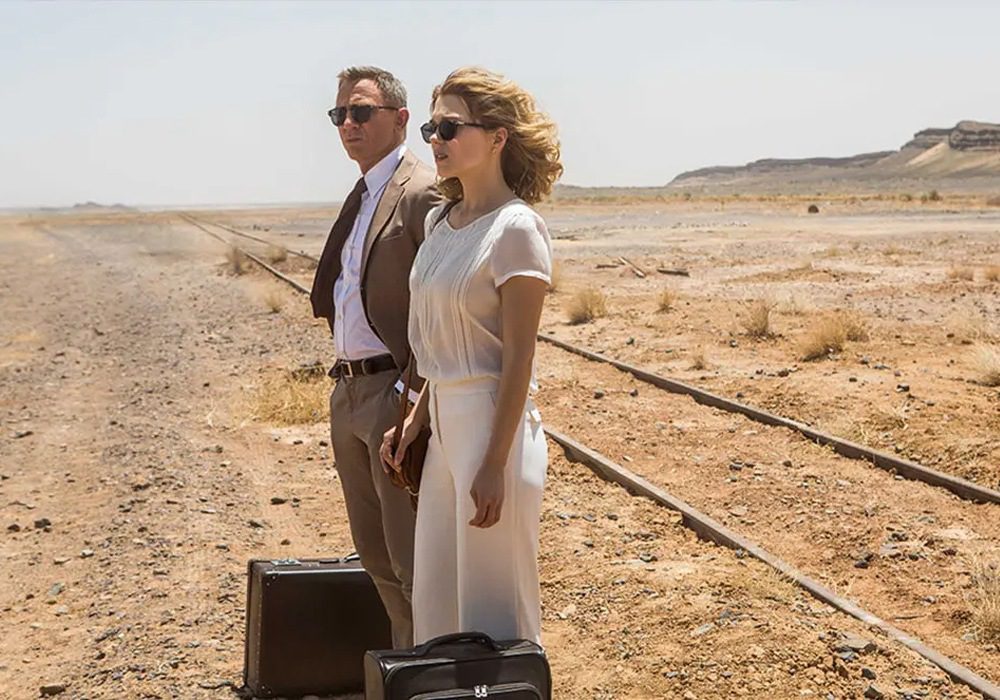 From briefcases to weekend bags, if it’s luggage and Daniel Craig’s James Bond is carrying it, it’s probably from Globe-Trotter. The English brand has been going strong since the 1800s and most recently kitted Bond out with a selection of hard-shell suitcases for upcoming film No Time To Die. 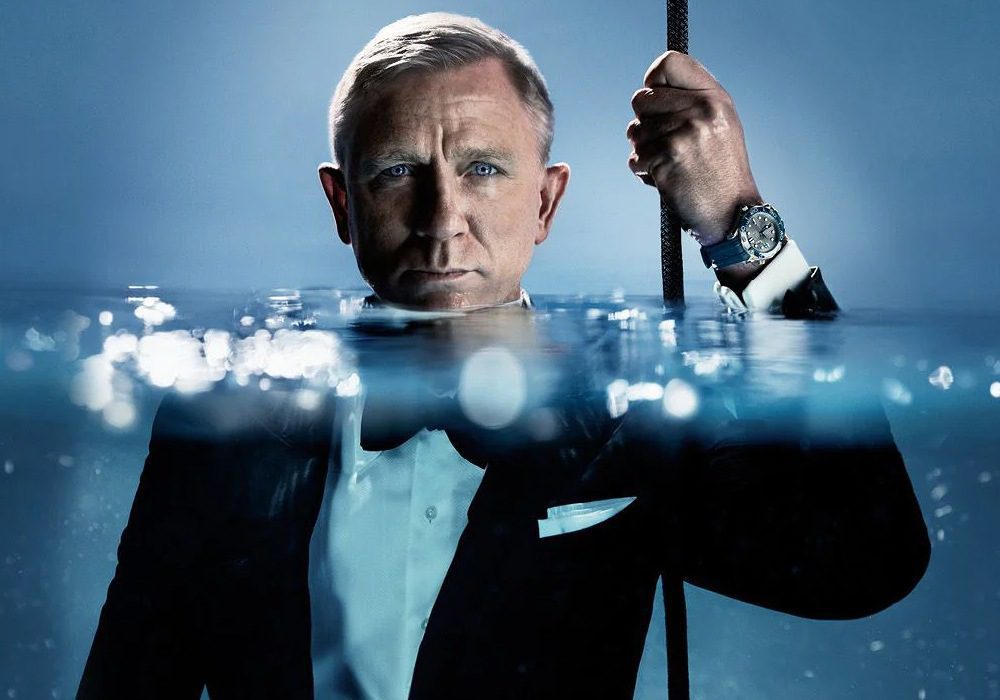 Maintaining a long-running relationship, Craig’s Bond still favours Omega watches as his wristwear of choice. Since 1995, Bond has worn one of the brand’s Seamaster watches in every film and Craig has kept that tradition alive.

Of all the Omega watches Craig’s Bond has sported, a couple of our favourites are the Seamaster Special Edition on the black and grey NATO strap in SPECTRE and the Seamaster Aqua Terra from Skyfall. 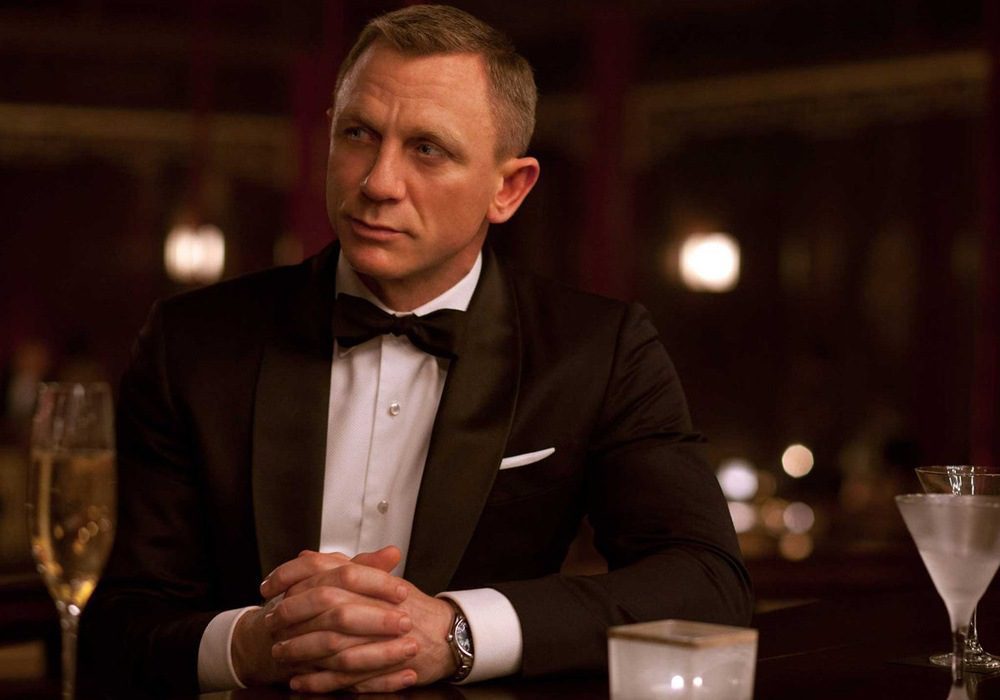 Turnbull & Asser has long been supplying shirts and ties to 007, from the iconic Dr. No shirt worn by Sean Connery to the more recent crop sported by Craig himself. Sadly, the brand stopped working with the Bond franchise after Casino Royale when Craig wore its shirts for the last time on-screen, but it’s still a huge part of Bond’s history and undeniably one of his favourite brands.