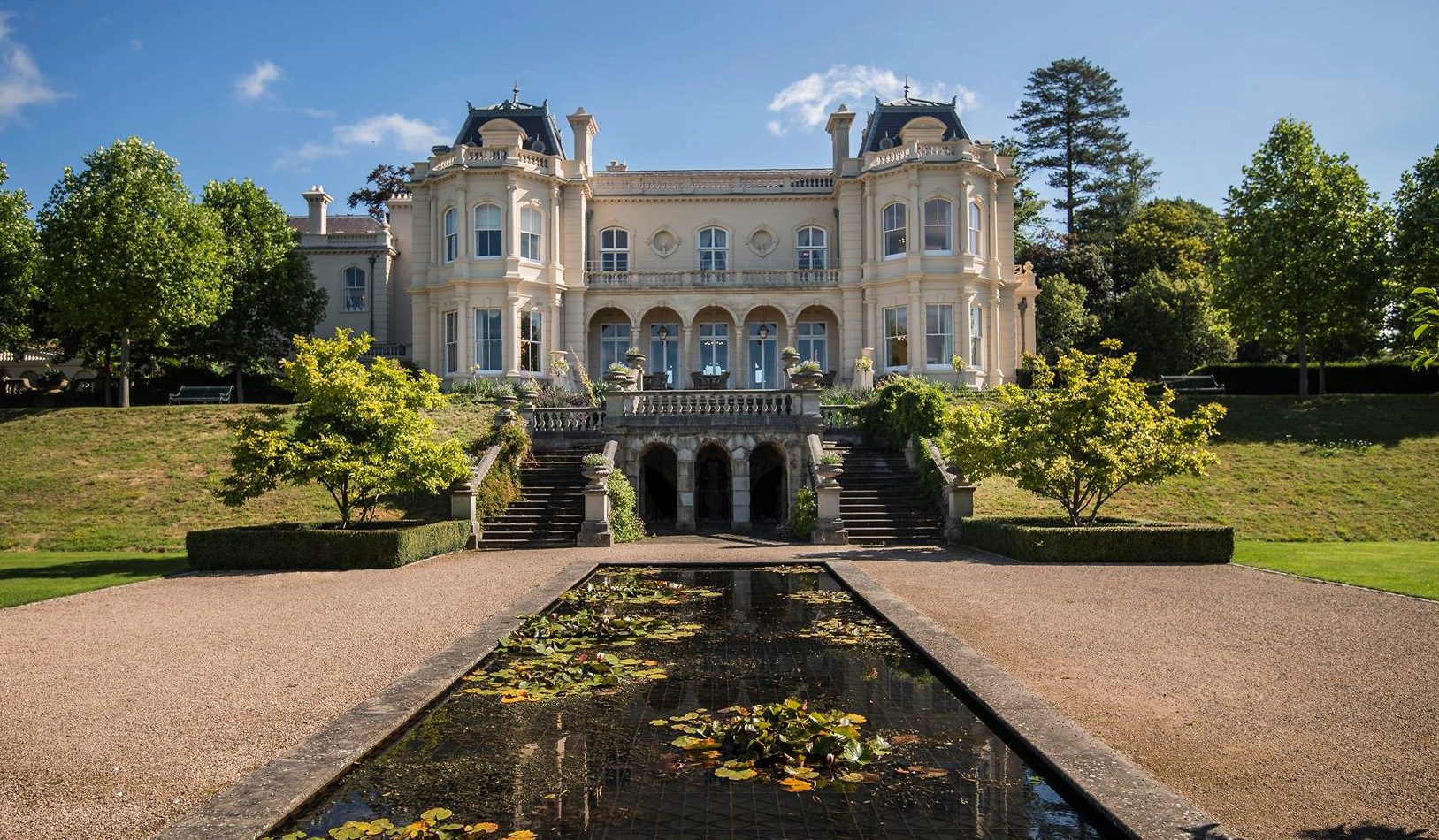 You need a holiday. Admit it, you know we’re right. Nothing too far afield, just a break, a chance to recharge. In fact, you need a holiday where the hotel is the holiday. A few days tucked away in the countryside amidst lush surroundings, bit of greenery to walk around in, enjoy some world-class food and then return to normality feeling fresh and raring to go.

Luckily for you, we’ve compiled a list of where you should go. Thank us later.

Let’s start with the sunsets shall we? They’re magnificent. Truly awe-inspiring. Granted, they’re not the work of Head Chef and owner Michael Caines CBE, but he’s made sure that as guests, you can make the most of them. Drink them in, along with a complimentary Williams gin and Fevertree tonic, as you sit in your balcony’s outdoor bathtub (selected rooms). Peak relaxation.

Day-dreaming aside, Lympstone Manor really is one of those truly once-in-a-lifetime experiences. Exclusive, but still extremely welcoming, Michael himself can be seen mooching around and often greeting guests upon arrival. Interiors reflect the pastel estuary surroundings, rooms are glorious spaces with bathrooms clad in marble and shower heads the size of dustbin lids. Needless to say, the on-site restaurant was awarded a Michelin star within six months of opening. Book yourself in and you’ll never forget it. 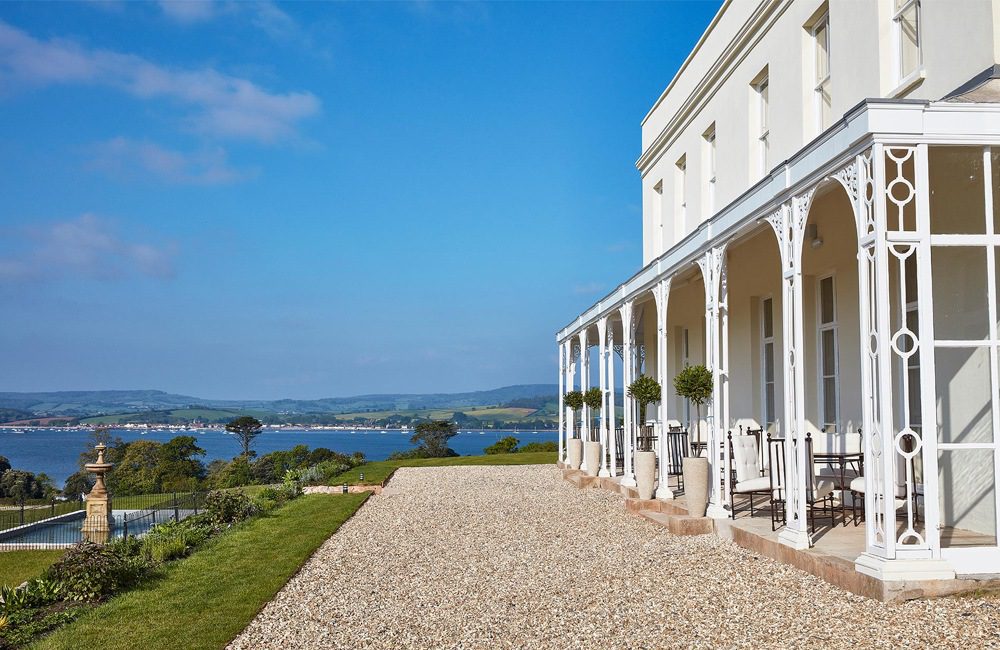 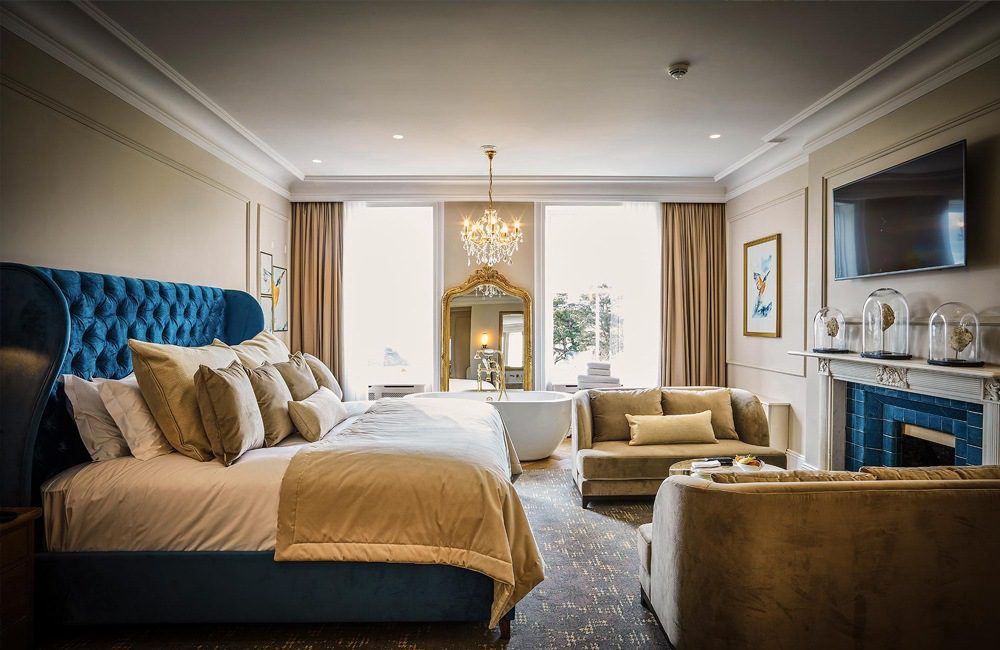 Roll call time: The Duke of Buckingham, 1st Earl of Orkney, Sir George Warrender, 2nd Duke of Sutherland, 1st Duke of Westminster, a former Prince of Wales… you get the picture. Cliveden’s got history, so when Chewton Glen took over after years of decline, it was good news. One of the country’s most celebrated country house hotels given a 21st-century makeover.

The surroundings are peak English aristocracy, but despite this, there’s a delightfully friendly atmosphere inside and the building now has a relaxed and hospitable feel. We don’t want to underplay it however – expect serious luxury with each room and impressive menus courtesy of decorated chef Andre Garrett. 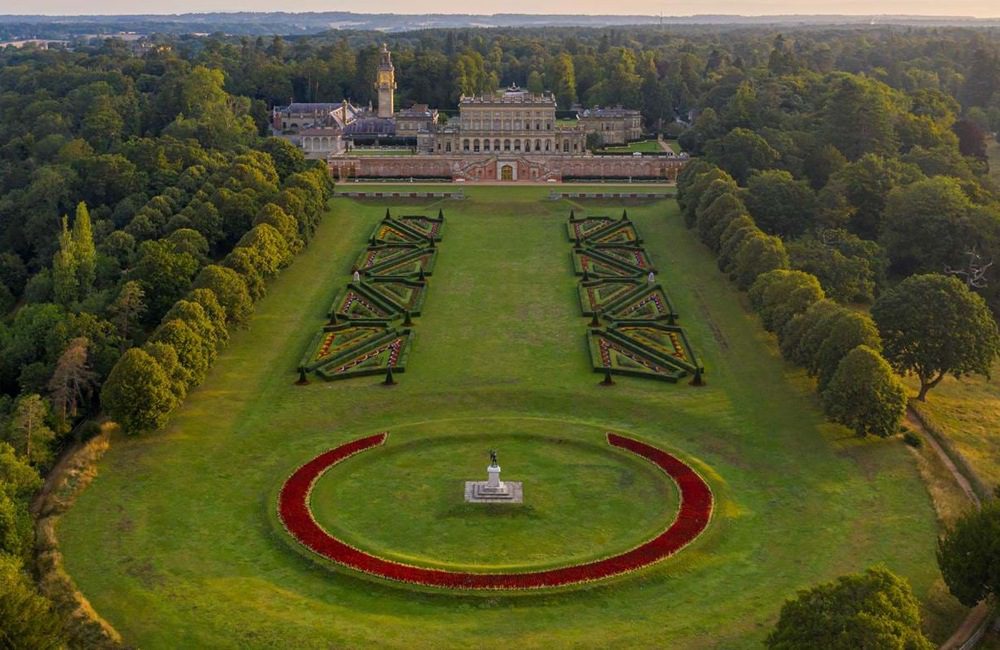 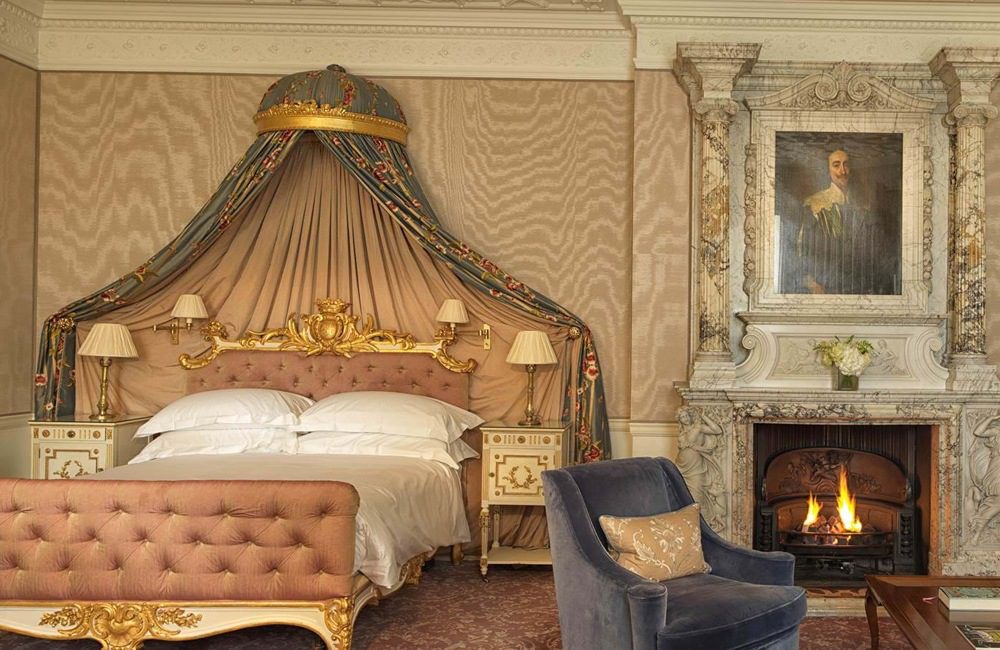 A hybrid mix of contemporary design and architecture coupled with classic country house vibes gives this retreat in the heart of the Cotswolds a wonderfully relaxing feel. There’s plenty to do for here for the most active of gentlemen (think cycling, swimming, disc golf, croquet and tennis) whilst those preferring to take a load off can unwind in the spa, which offers a wide range of Elemis and aromatherapy treatments, amongst other traditional services.

Rooms are spacious and understated in neutral colours, some with tall ceilings and exposed wooden beams. Roberts radios (with iPhone docks) come as standard, as do Aromatherapy Associates soaps and shampoo. Dining comes in the form of casual gastropub fare or decadent restaurant bites. 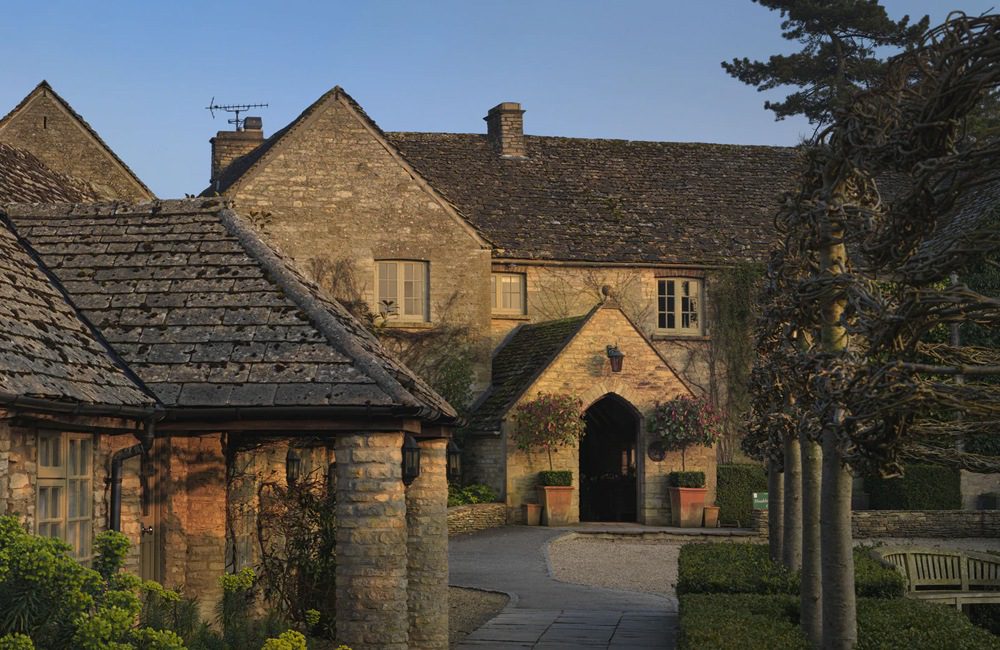 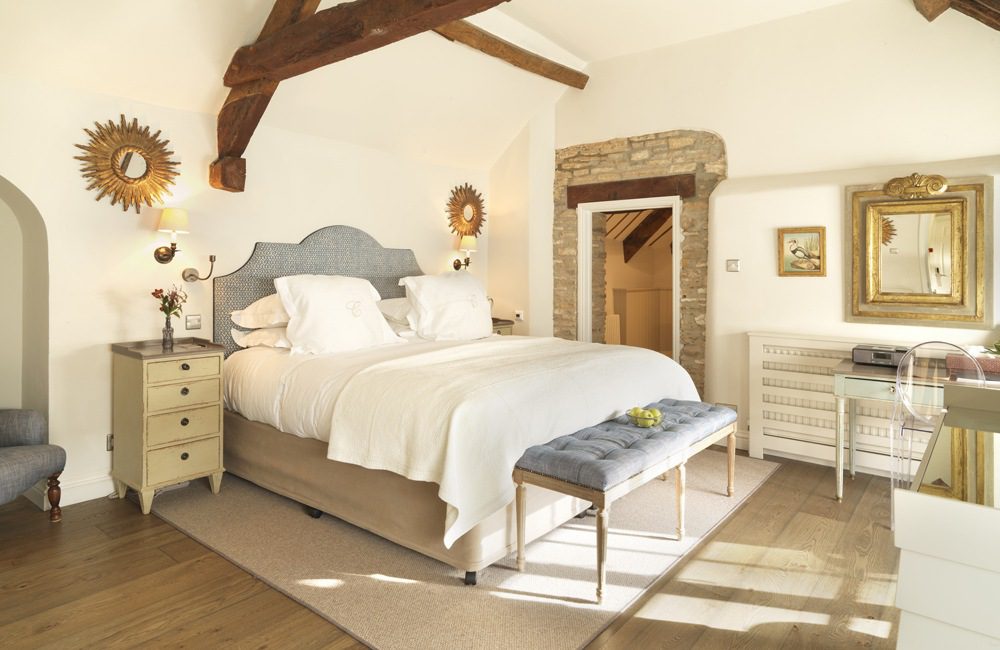 Grand Designs-levels of glass and luxury abound at one of the Lake District’s foremost luxury stays. There’s an original Edwardian whitewash house, renovated and extended, with further separate modern Scandinavian outhouses and a luxe lake house to top things off. Every whim is catered for: spas, terraces, lounges, hot tubs, an indoor pool, streams, ponds, even llamas frolic in the grounds. All of which channel a chic but endearing country feel.

Rather than the obvious star-spangled tasting menus, food follows an Asian theme with Michelin-starred dishes available at the hotel’s headline restaurant, HRiSHi. Nearby Gilpi Spice offers small plates continuing with the theme, all of which are fantastic value for money, despite prices being at the higher end. Endless staff are on hand to make every stay as smooth and rewarding as possible. 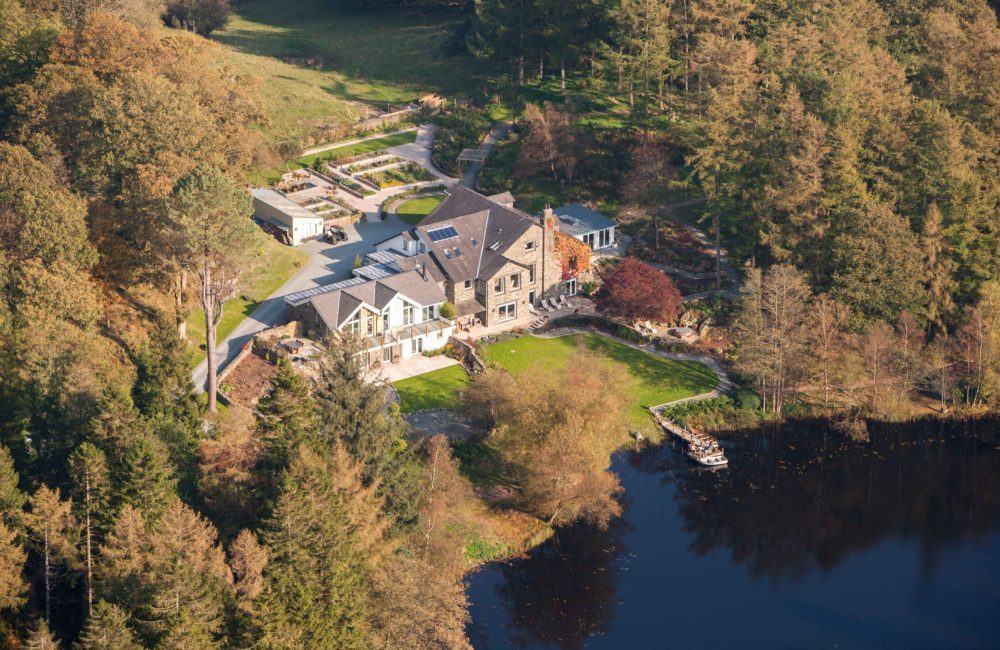 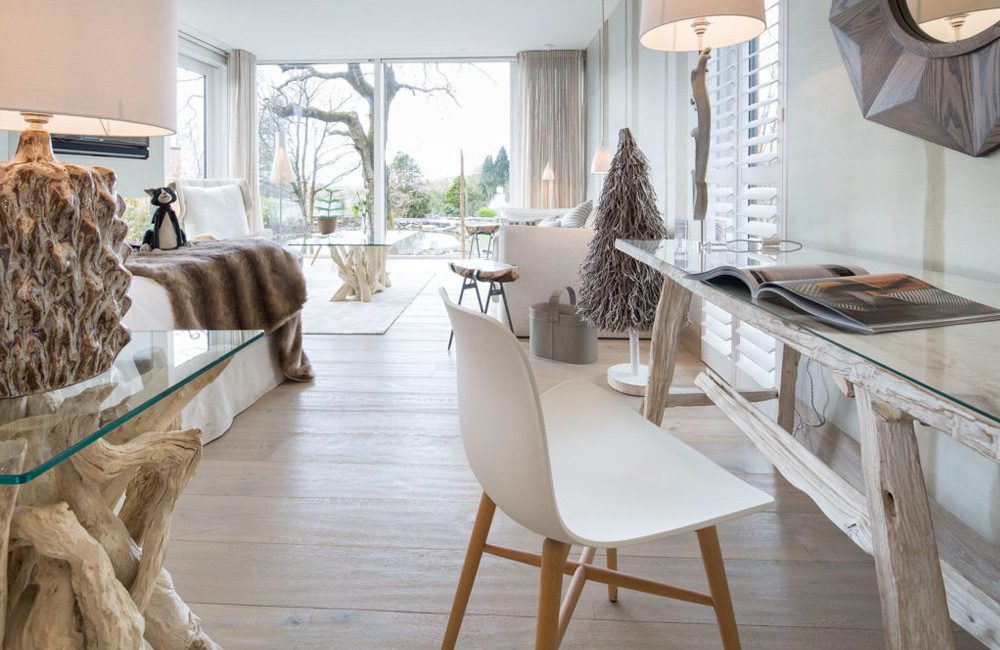 The House At Beaverbrook, Surrey

A mere 18 miles from London, The House At Beaverbook – former residence of press baron Lord Beaverbrook – is a walk back in time to the decadence of 1920s high society with a truly 21st century finish. The 18 rooms, designed by Susie Atkinson, are elegant and homely, whilst the house itself, home of the UK’s first home cinema, has been updated without sacrificing charm. Delightful staff make sure guests don’t lift a finger.

To complement the stately charm of a house that once witnessed casual visits from Churchill himself, the guest experience has been fully modernised. Guests can borrow iPod touches and iPads complete with Netflix , whilst rooms come with Apple TV, lush bathrobes and complimentary Sipsmith sloe gin. Charmingly off-piste dining options include a Mediterranean-themed restaurant and a Japanese venture from ex-Nobu chef Maruyama Taiji. 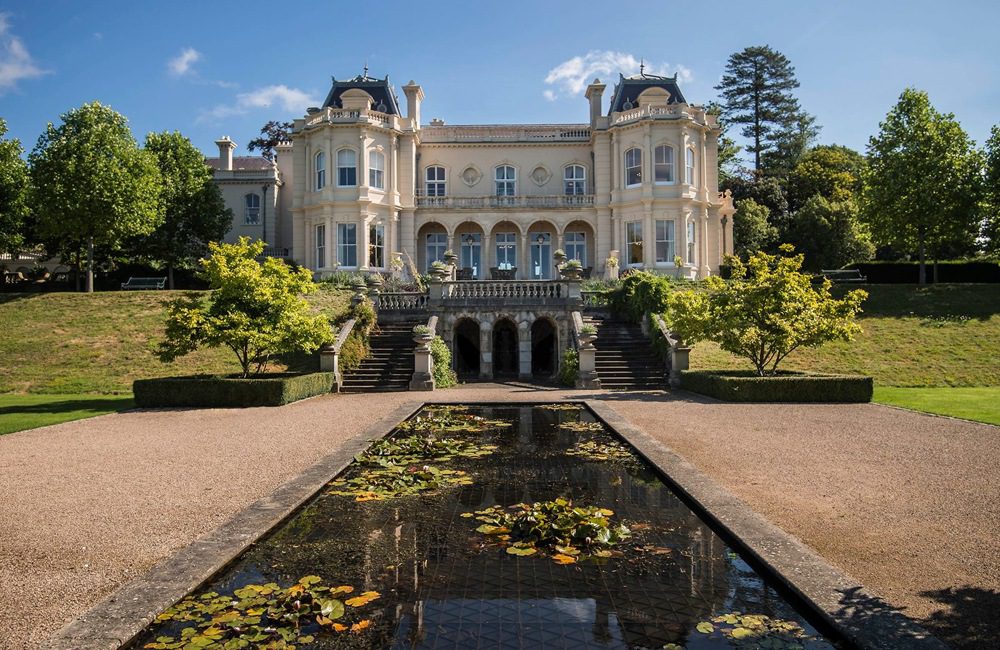 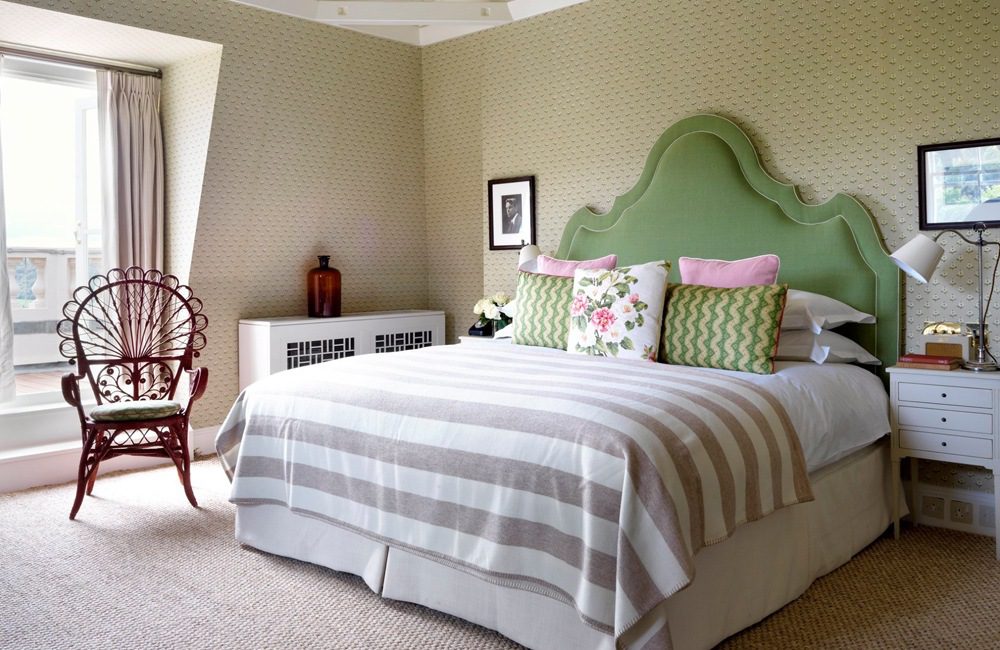 If you’re looking for a base to explore some of the best coastal stretches and mountainside panoramas Wales has to offer, Bodysgallen Hall & Spa is a luxurious and welcoming period property set against acres of landscaped gardens and unspoilt parkland. Both the décor and atmosphere is in-keeping with the buildings wonderful vintage exterior and corridors and rooms make for a wonderfully period setting.

If you’re after relaxation and calm, the on-site spa is a real joy, featuring a hot tub, indoor pool and steam room. A trip to the gym is optional. Suites come with four-poster beds and the restaurant is strictly smart attire. Speaking of restaurants, head chef John Williams’ work in the kitchen is a far cry from the traditional essence of the rest of the building with local ingredients thrust deliciously to the fore. 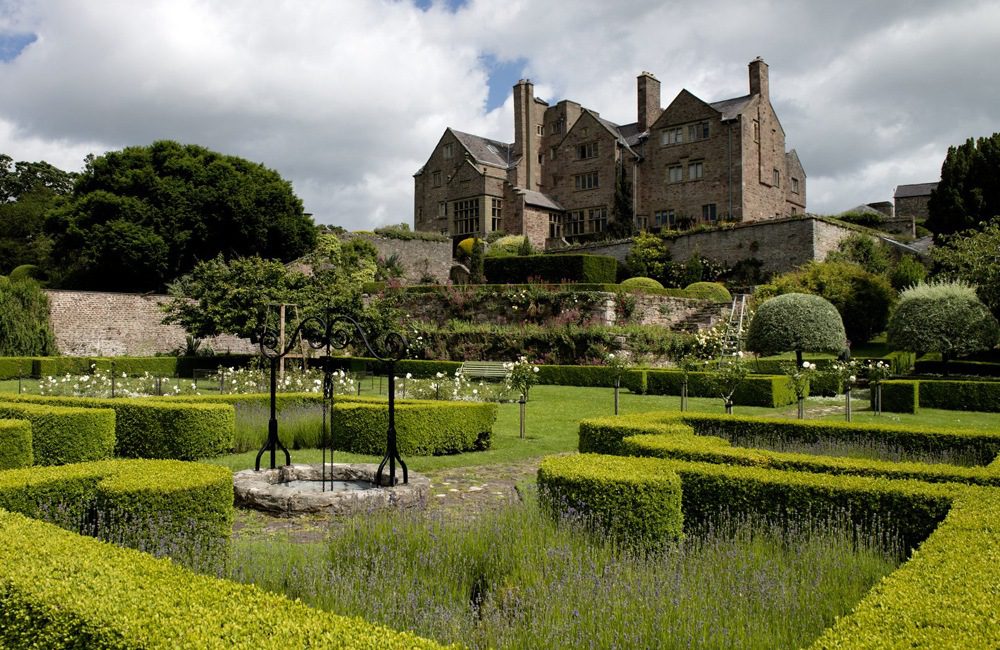 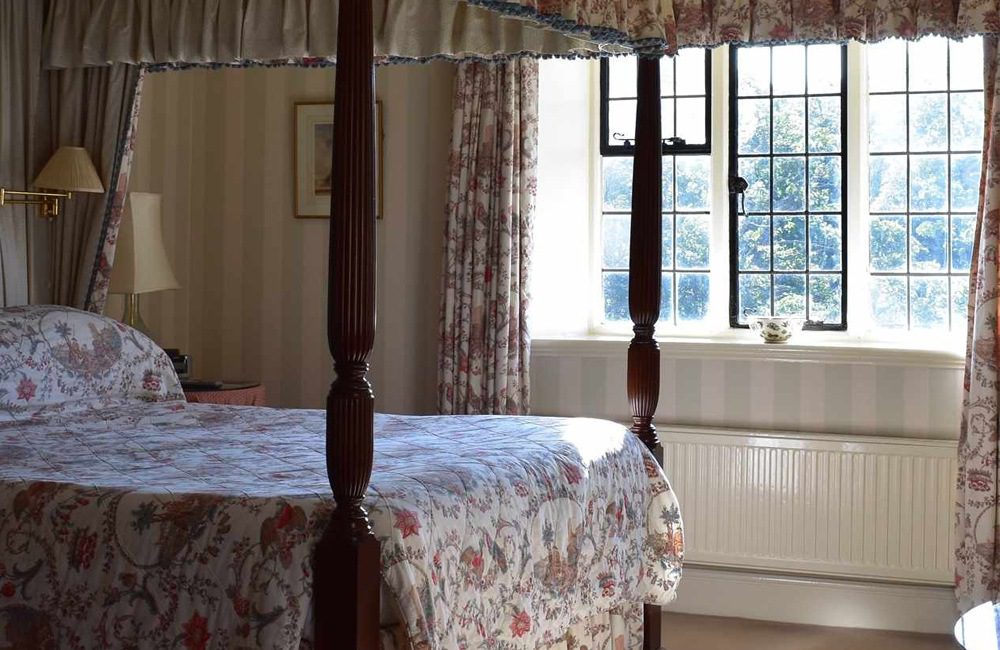 Another luxury option, with serious walking potential in dramatic woodland. There’s even complimentary Hunter wellies. Lime Wood really is beautiful. A classic Georgian country house exterior counterbalances a contemporary interior featuring flourishes of grandeur and an impressive array of pieces by the likes of Emin and Cocteau.

Rooms come with a range of goodies including magazines, walking guides, wine glasses, ice buckets, room pantries with snacks and Bamford toiletries, whether standard or suite. Needless to say, the suites – which take in unique parts of the building – are a true delight. The spa is otherworldly, with treatments ranging from standard facials to LED light therapy. Meanwhile Hartnett Holder & Co do wholesome, delicious food with flair. 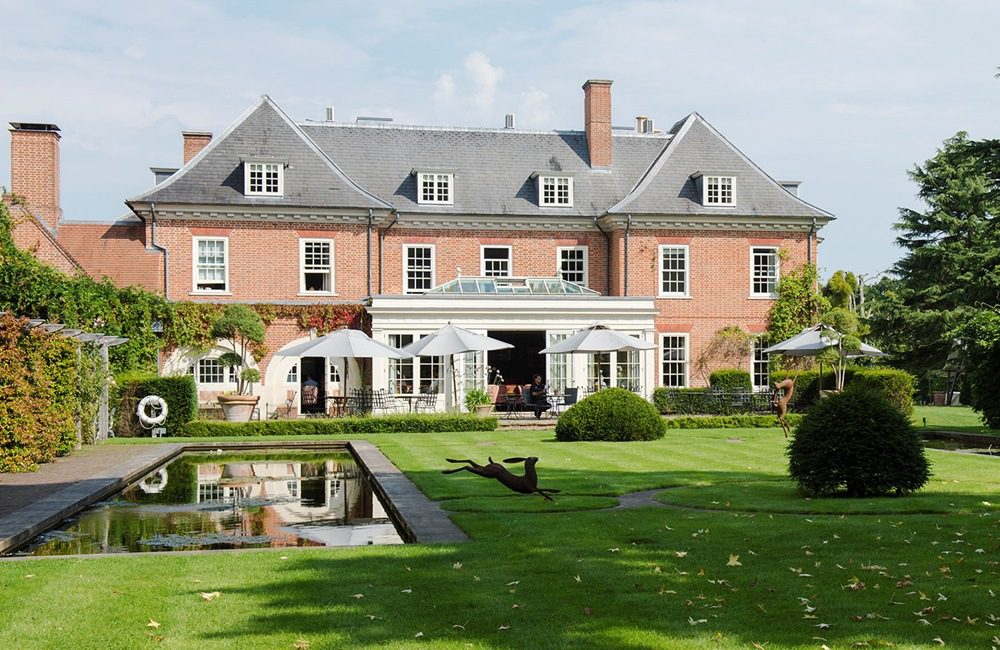 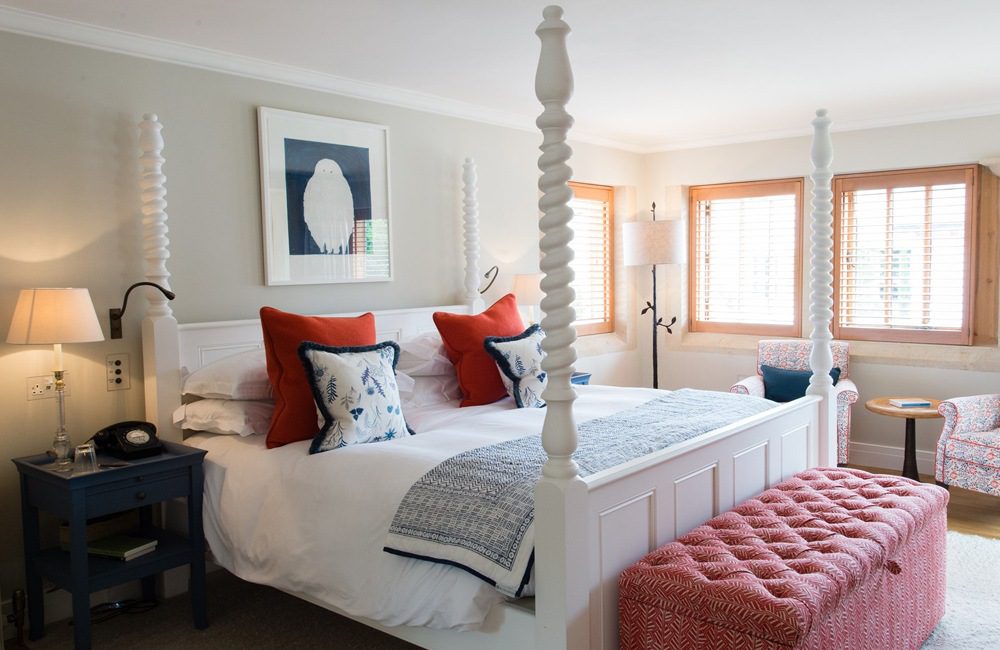 Saving the most remote until last. If you want a good bridge length between you and civilisation, complete with classy surroundings, head to the Isle of Eriska and check in. This 19th-century Scottish mansion is a stunning fleck on truly awe-inspiring Highland scenery with idyllic silence aplenty. Comfortable elegance is the theme here, with enough balance between fresh and traditional as not to be stuffy.

The spa is an impressive one and country pursuits such as archery and clay pigeon shooting are encouraged. Boat trips can also be arranged from the private pier. Rooms are spacious, welcoming and finished off with Molton Brown toiletries. Cottage and spa suites are equipped with outdoor hot tubs.

The on-site restaurant makes the most of traditional local ingredients – guinea fowl and Scotch beef make for ideal post-wander feasting. 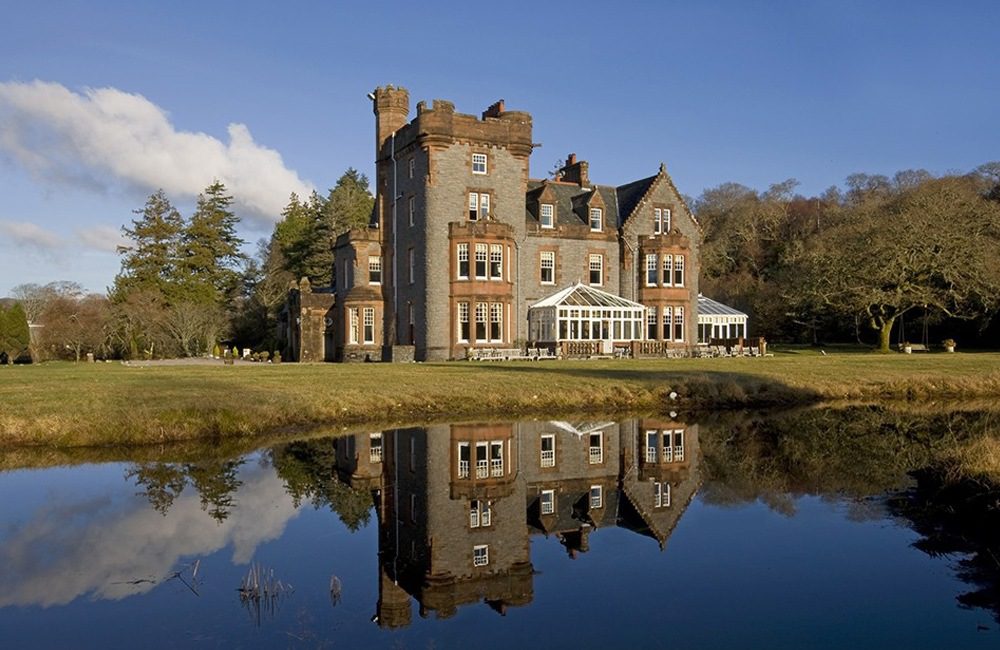 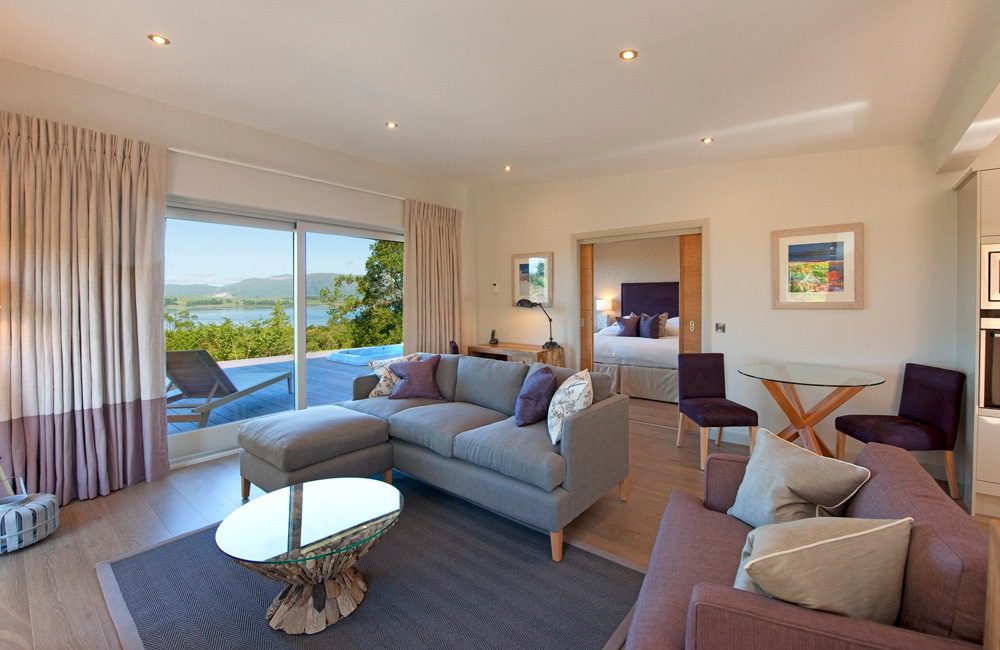