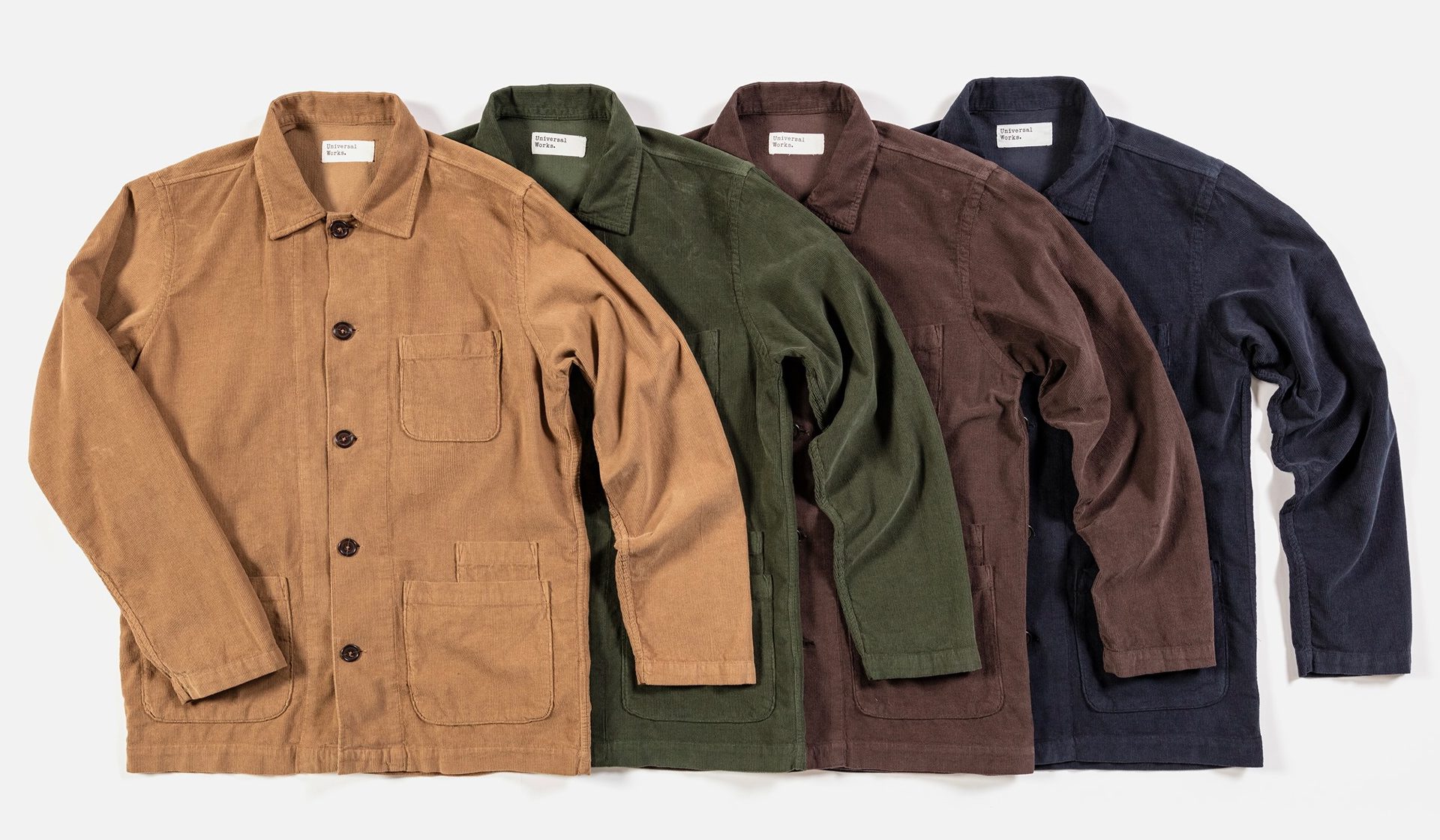 Simple, durable and easy to throw on, the chore coat is one of the most functional pieces of outerwear. But its humble origins belie its now ubiquitous status as a menswear staple.

It began life on the factory floor, kitting out labourers and machine workers with its multi-pocketed design and lightweight, hardy cotton twill fabric that could take a beating. However, with its collared neck and simple button front the jacket gives a surprisingly smart look, and since then it’s been adopted over the decades by everyone from Bill Cunningham to N.W.A.

If you’re looking to add one to your rotation, you’re in the right place. From choosing the right fabric to the best chore jacket brands, we’ve got you covered. Back in the day, chore coats were made from either cotton twill or moleskin, two fabrics renowned for their hardiness and ability to withstand the rigours of working life. So, if you’re after the kind of chore jacket you’d find over a century ago in industrial France, that’s the way to go.

Both fabrics are still incredibly popular – even if they’re only worn to sip flat whites rather than operate heavy machinery. Due to the jacket’s versatile nature though, all manner of fabrics are available today, from corduroy and wool to cashmere and denim. As such, when looking for your perfect chore jacket, think about where you might wear it most: if you’re after something smart casual leaning then consider a more luxurious fabric vs something more casual and durable. 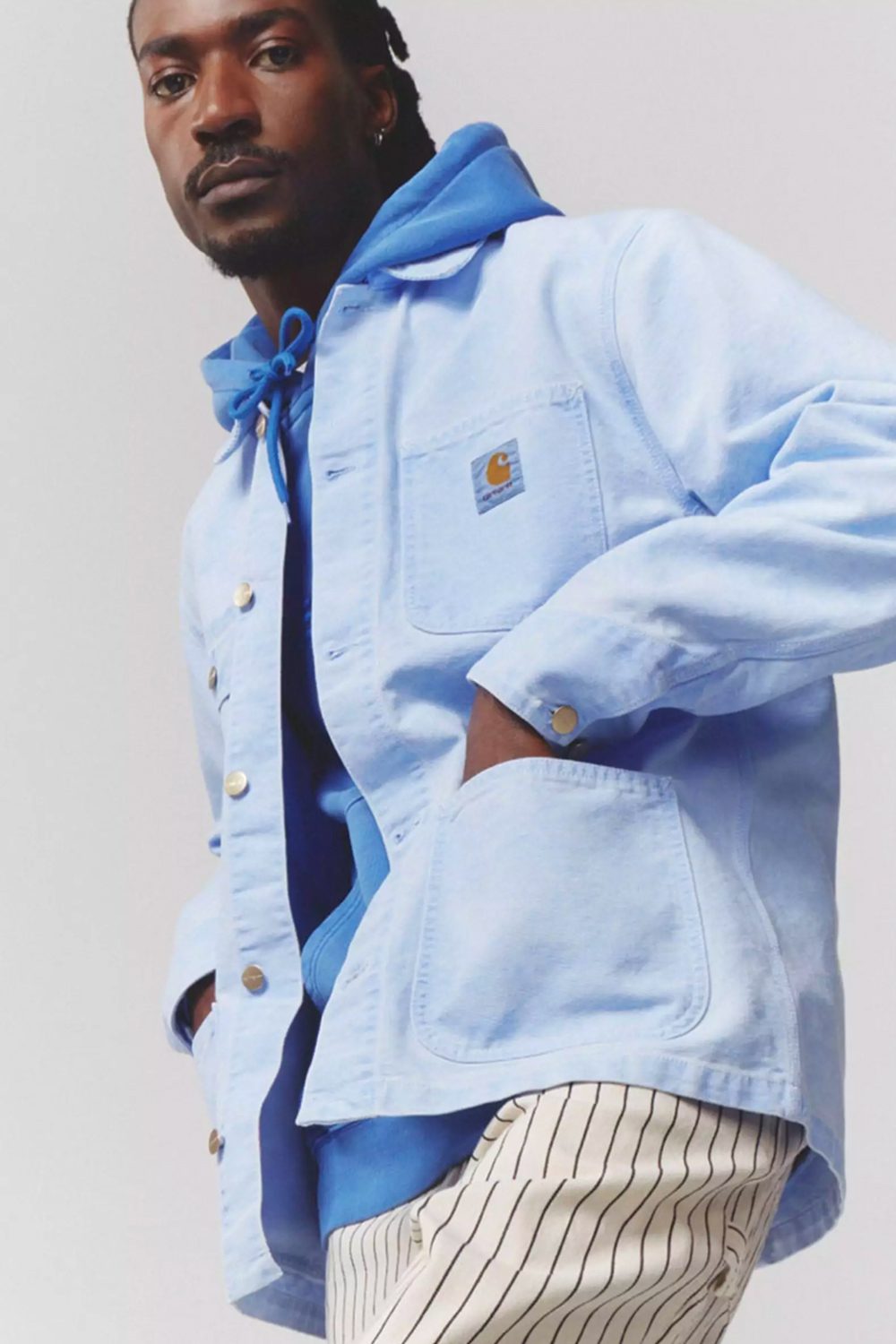 Due to their previous life as a working garment, chore jackets are traditionally cut with unstructured, boxy silhouettes designed to be easily worn on top of overalls. In general, workwear tends to be made up of relaxed fits, designed as much for function as they are comfort. If this is the look you’re going for, the chore jacket will slot seamlessly into your rotation.

Go for a classic take and you’ll be able to wear it over a T-shirt as an outer layer, or under heavier outerwear, such is its versatility. For smarter looks though, you will want to seek out a slimmer fit. Chore jackets wear surprisingly well with tailored trousers, Oxford shirts and smart shoes, so if you’re after a coat to wear for smart casual occasions, consider a slightly sharper silhouette. Chore jackets are largely associated with two colours. The garment originated in France at the turn of the last century and was almost exclusively available in a rich blue colour. As a result, the jacket became known as ‘bleu de travail’ in its homeland, which literally translates as ‘work blues’. So, for much of Europe, the chore jacket has always been bright blue.

For America, however, where this classic worker style took off in the mines and factories of the early 20th century, the chore coat was brown. Detroit brand Carhartt has been closely associated with the style for decades, with its unique brown duck canvas being used to produce thousands of workwear garments.

So, for a vintage-inspired look that pays homage to the workers of yesteryear, those are your choices. For the rest of us, the chore jacket is widely available in any and every colour today. As a layering piece it can be the perfect way of adding a pop to your look, so consider greens and deep reds for a subtle statement.

The original American workwear brand, Carhartt has been producing chore jackets pretty much since its founding in 1889. Expect hard-wearing, durable designs with riveted pockets, blanket linings and corduroy collars – a feature the US brand added to its earliest versions.

Another staple chore coat option, Dickies has been supplying ranch hands, miners and factory workers since 1922, so it knows a thing or two about crafting well made workwear. It’s renowned for putting function first and foremost and its designs feature plenty of handy pockets – perfect for storing your daily essentials.

ISTO’s take on the chore jacket is heavily inspired by the original bleu de travail, and is even available in a blue that’s strikingly similar to the classic French shade. Making use of organic cotton and a slim, tailored fit, this is a jacket perfect for those looking for something on the smarter end of the spectrum.

When it comes to wardrobe essentials, few do it better than Percival. The east London-based brand specialises in classics, from perfectly fitting knitted polos to tailored overcoats.

Its chore coats are some of the finest you can buy and feature detailing unique to Percival. Slanted side pockets replace the usual patch pockets, while the fit is boxy through the body making it ideal for wearing open over a T-shirt or buttoned up with tailored trousers.

Placing as much importance on sustainability as it does functional design, Asket is refreshingly transparent with its production and the cost of making each of its garments. Its chore jacket ‘overshirt’ is no different, and might just be the only version you’ll need.

Crafted from a mid-weight organic cotton and with classic three pocket detailing, it’s the ideal layering piece, perfect for wearing year round.

Form and Thread is built around the idea of a capsule wardrobe. Each of its pieces are minimally designed and made to be interchangeable – you could get dressed in the dark with Form and Thread and look great.

Its chore jacket is one of its core pieces. Available in a range of colours and finishes, it’s perfect for wearing with wide-legged chinos and high tops.

Shop now at Form and Thread

If you’re after a breathable chore jacket you can wear in the warmer month, Flax London is the place to go. It uses a mid-weight 15oz canvas linen by Libeco, which it crafts into a classic worker jacket silhouette.

Expect three large patch pockets (all lined with un-dyed linen), as well as a soft, unstructured fit that’ll only get better with age.

Based in the UK, Universal Works’ elevated take on workwear sees it make use of luxurious fabrics ranging from Italian wool to Japanese selvedge denim. As such, its chore jackets have the look of tried-and-tested workwear, but the feel associated with more high-end garments.

For chore coats tailored with a slimmer fit, Todd Snyder is well worth a look. The US brand applies its preppy feel to its workwear, giving its staple pieces a more smart casual edge.

Expect chore jackets cut from fabrics including needlecord cotton and Harris Tweed as well as fits that are slim through the body and arms.

Nigel Cabourn specialises in accurate reproductions of both military and workwear, from WWII parkas to 1950s denim jeans. Its chore jackets boast unique details such as back pockets designed to carry tools, raglan sleeves, shirt-style hems and buttoned cuffs, while they’re cut from the finest Japanese cotton and denim fabrics.