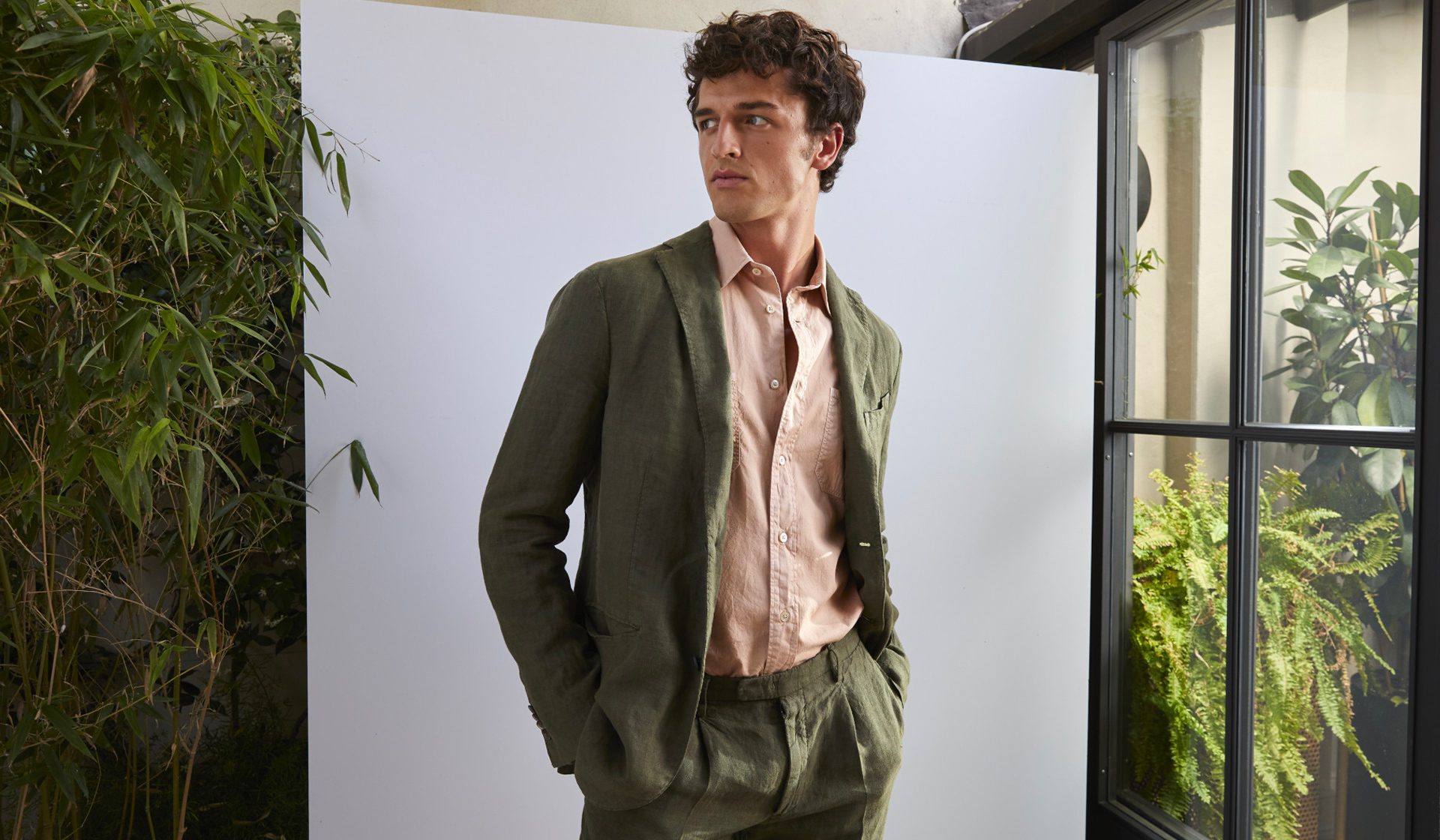 When we think of tailoring, the colours that intrinsically spring to mind are charcoal and navy. Traditional, safe and versatile, both tones have come to represent the vast majority of suits sold today, but there are a plethora of other tones that should also be considered.

Because of their widespread adoption in the workplace, charcoal and navy tend to imply a sort of innate conformity. Of course, they can look stunning when done well, but there are occasions when a different suit tone can raise the sartorial bar, elevating your two-piece from uniformity to extraordinary.

With that in mind, we’ve highlighted our favourite suit colours and offered some advice on how and when to wear them to give your smart wardrobe more dynamism and individuality.

The black suit is something of an enigma because while it can look extremely slick when done correctly, the fact that it is standard funeral uniform puts a lot of people off. But when black has long been the go-to tone for the fashion pack, why not for a more sartorially-inspired wardrobe, too? We think the answer lies in how you style it.

Traditionally, the single-breasted, single-button matte black suit would be worn with a classic spread collar white shirt, black tie and white pocket square = monochromatic uniformity. This is great when the suit silhouette is slim cut a la Hedi Slimane, but you need the figure to match. It’s also very out of place anywhere but the most formal of settings.

A much more forgiving look would be to swap out the white shirt and tie for a black shirt, fine gauge sweater or a knitted polo in a charcoal tone. That way you soften the look, break up the textures and make it so much more chic and individual.

It’s difficult to define charcoal as a single colour since there are so many tonal variants and nuances to this most popular of suiting shades. Suffice to say you can’t own enough charcoal suits, since they are perfect not only for a day-to-day smart office environment, but also smart casual looks too.

Whether you prefer lighter or darker charcoal tones is up to you (typically, the darker the tone, the more business-like the aesthetic), but the critical consideration is fabric. Cut, of course, has to be as close to perfect no matter what suit you’re talking about, but with charcoal wools, a flat shiny cloth is a disaster.

Instead, you want to go for a cloth that is textural, with interesting tonal nuances. Flannel is ideal for this since it is woven from carded yarns which retain the longer wool fibres, hence the melange finish. This really brings charcoal tones to life and is ideal for a fall/winter suit or wearing as separates.

A non-negotiable colour when it comes to building a suit collection, navy is a fundamental and essential suit tone to own. Unlike with charcoal, which can look flat and cheap when it has a little shine in the cloth, navy can benefit from a touch of gloss (emphasis on ‘touch’). That being said, a matte navy tone has an almost ‘dry’ look and texture to it which can also look great in the summer months, especially in a basketweave fabric such as hopsack.

Navy suits love the clean crisp contrast of a white shirt, or failing that, a sky blue style for a tonal approach. Because it’s such a versatile colour, it allows you to wear bold contrast tones in your tie and pocket square, so don’t be shy. A flash of orange, yellow or red silk can work wonders against the rich complexities of a navy wool cloth.

Where people sometimes struggle with a navy suit is choice of footwear – black Oxfords are a failsafe option, but don’t be afraid to wear tan or oxblood monks, double monks or brogues as these colours all complement navy well.

Given that the wavelength of green is the most easily visible to the human eye, it’s strange that the colour isn’t more popular when it comes to tailoring. Typically a country hue, you’ll find plenty of green tweeds and tartans, but a smart green suit is a rare thing.

Dark green tones – be they olive, forest or moss – are excellent when applied to linen suits. The slubby nature of linen creates a beautiful melange effect that really enhances the complexities of the green tone (linen takes dye really well too), so look for unstructured single-breasted styles for the warmer months.

It’s a versatile colour, and while splashes of bold hues can complement it, we would suggest a softer counterbalance by wearing tan, beige, off-white and khaki instead.

When it comes to the question of brown suits, there is only one possible answer: tobacco linen. It’s the sophisticated European’s best-kept summer secret that takes the traditional formal suit silhouette and turns it into a casual piece of relaxed tailoring.

Linen, especially that of Ireland and Belgium, is lightweight, breathable and with a natural drape that gets better with age. The crumple in the fabric imbues the suit with that much revered Italian sprezzatura, while the tobacco tone has an air of countryside elegance.

Moreover, tobacco brown is a doddle to style, complemented by any number of other colours. We would suggest a white or pastel shirt with a knitted silk tie of a brighter tone or pattern, bookending the look with a pair of suede tan or navy loafers.

Alternatively, ditch the shirt and tie and go with an off-white merino tee to dress the suit down even further.

Typically only associated with summer suits, ivory or off-white can be an extremely elegant option to have in your tailoring arsenal (just don’t order the ragu for lunch). The ivory suit looks its best in a linen or linen-blend cloth (often woven with cotton or silk).

Whereas bright white can veer too close to a Miami Vice vibe, the softer ivory tone has a regal feel to it, while the slubby linen cloth offers a more off-duty texture than wool. George Lazenby wears a great example of a modern single-breasted ivory linen suit in On Her Majesty’s Secret Service, likewise Leonardo Di Caprio in his rendition of Jay Gatsby.

Keep the look clean with a white or pastel tone linen shirt and contrast tie, or to dress it down further, a knitted polo in a pastel hue is a great way to add understated colour and additional texture.

For some reason, even the notion of the pastel suit strikes fear into the hearts of some men. It’s as if the mere thought of wearing blush pink, pistachio green or sky blue would somehow emasculate their entire identities. Far from it, pastel tone suits present a man bristling with confidence and creativity, an aesthetic harking back to the heady jazz age.

Linen is, once again, the prime fabric for such colours since the slubs in the cloth add a textural quality that prevents the pastel tone from looking flat. For a stunning example of how to do it right, check out Di Caprio once again in The Great Gatsby, where you’ll find him attending Nick Carraway’s birthday party in a perfect single-breasted pale pink suit complemented with a burgundy and peach repp tie.

If that look is too formal, then drop the tie and wear a white cotton shirt with a soft roll to the collar.