Arguably no pop-culture phenomenon in the last 20 years has had a more measurable impact on men’s hair than Peaky Blinders. The BBC drama, which charts the rise of Birmingham’s Shelby family from small-time crooks to international organised-crime syndicate, is as well known for undercuts as it is for Brummy accents and flying fists.

When the show first aired almost a decade ago, it renewed public interest in early 20th century men’s style. Young male fans were getting excited about tailoring again, trying desperately to decide if they could pull off a flat cap (they couldn’t), and, most of all, marching to their local barber shops, clutching photographs of the show’s main characters.

Protagonist Tommy Shelby’s tousled crop and disconnected sides get the most attention, but it’s not the only influential Peaky Blinders trim. Below we take a closer look at some of the show’s character’s signature cuts and how to get them, as well as answering the all-important question: just what exactly is the ‘Peaky Blinders haircut’ anyway?

What Is A Peaky Blinders Haircut? There are multiple notable hairstyles across multiple notable Peaky Blinders characters, which change slightly from season to season. How then, one might wonder, is it possible to lump them all into one category? Well, there’s one common theme that unites many of the show’s most iconic cuts: the undercut.

With the exception of a few, most of the key Peaky protagonists sport an aggressive disconnected undercut. This is the name given to a style in which the back and sides are clipped very short with longer hair left on the top of the head and no graduation between the two. It’s a look that was popular with young working-class men during the time period in which Peaky Blinders is set and is bigger today than it ever has been.

The disconnected undercut is great as it is neat, easy to maintain and can be worn in endless variations depending on how the hair on the top of the hair is cut and styled. It provides a way to reduce volume in longer hair, or add some extra character to traditional trims like crew cuts and Ivy Leagues.

Should I Get A Peaky Blinders Haircut?

Thinking about getting a Peaky Blinders haircut yourself? You might be wondering whether or not it will suit you. The good news is that there are so many different styles to pick from that there really is something for everyone. The most important factor in deciding which will be right for you is face shape.

Face shape refers to the rough outline of your face and which of five shapes – oval, square, round, rectangle and heart – it most closely resembles. Think of oval as a sort of tonsorial status quo. The goal is to balance out the proportions of the head in order to get things as close to an oval-shaped outline as possible.

For example, the aim for someone with a long, rectangular face is to either add some bulk to the sides or avoid adding any additional volume on top of the head. This is because any extra height will extend the face further, taking the overall shape further away from that oval target. Of course, the Peaky Blinders haircut is defined by its short sides, so the best option in this case would be to choose a variation that’s cropped very close to the head on top.

The other thing to think about before heading to the barber is your lifestyle and place of work. Sure, the office is a very different place now than it was even a decade ago, but those who work in strait-laced corporate environments could still end up raising a few eyebrows if they turn up on Monday morning with the sides of their head shaved. Tommy is the ringleader of the Shelby family and the main protagonist of the entire show. He’s the most calm and measured of all the Shelby brothers but he can also become brutal and unhinged when his temper frays – something which is reflected in his iconic haircut.

Tommy’s hair is cut into a soft, textured crop on top and swept to the side. This is contrasted by an aggressive disconnected undercut to the back and sides, with the hair shaved almost completely down to the skin.

Ask the barber for a crop with a disconnected undercut. Make sure they know you want to style the hair on top to the side too. Once the scissors have been put away styling can be achieved with a little pomade, softening it up in the hands before using it to tousle the hair, creating texture, and work it to one side. 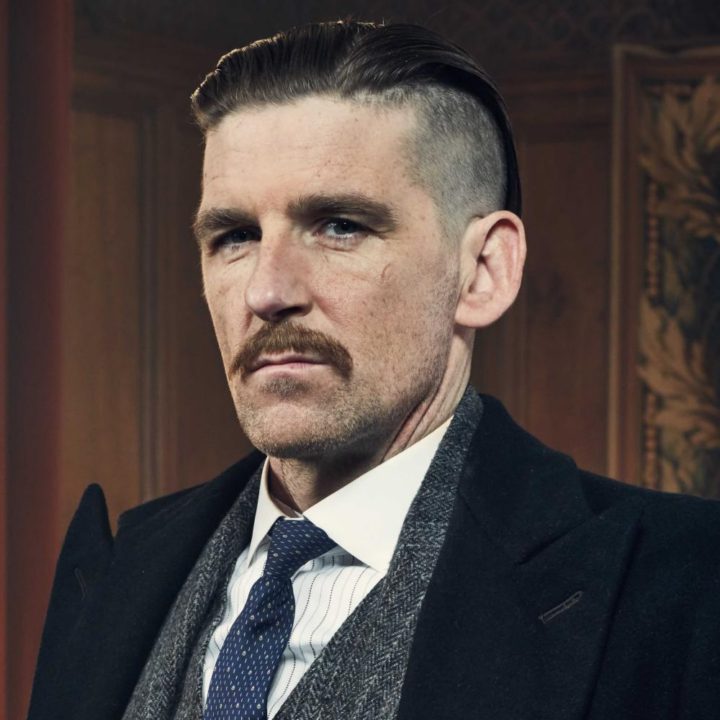 The most volatile, violent and unpredictable of the Shelby clan, Arthur has a short fuse and isn’t hesitant to use his fists. His haircut is also the most aggressive of all the brothers, boasting an extreme contrast in length between the long hair on top and the clipped hair on the back and sides of the head.

To get the look, your hair will need to have sufficient length to begin with. On top, it needs to be long enough to lie flat when combed back over the top of the head.

When it comes to visiting the barber, ask for a slick back with a disconnected undercut. Make sure they know you want the hair on the top to be kept a reasonable length and take a photo along if you want to be sure.

Styling-wise, you’ll need a comb, a blow dryer and some pomade. Apply the pomade to slightly wet hair and use the comb and blow dryer to style the hair backwards. Keep it loose though – there should be some volume rather than the hair being completely plastered to the top of the head. 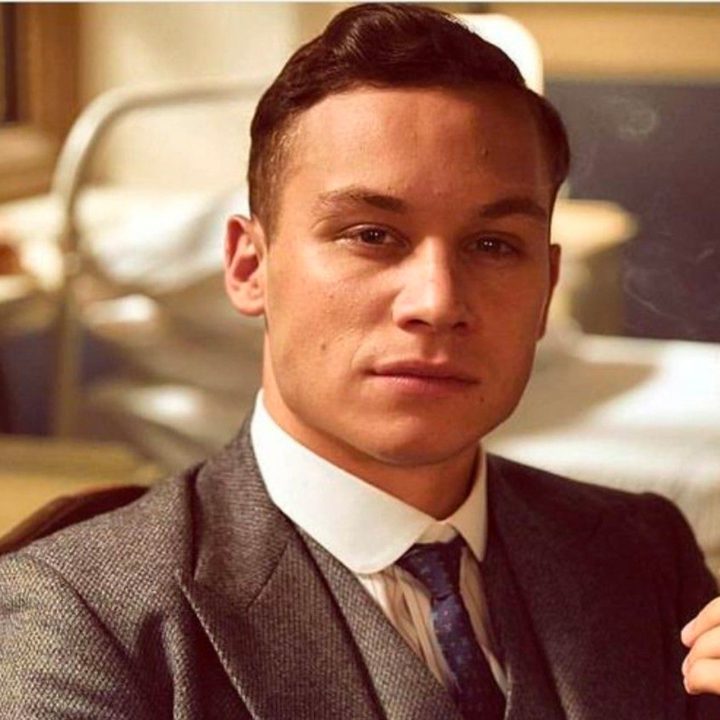 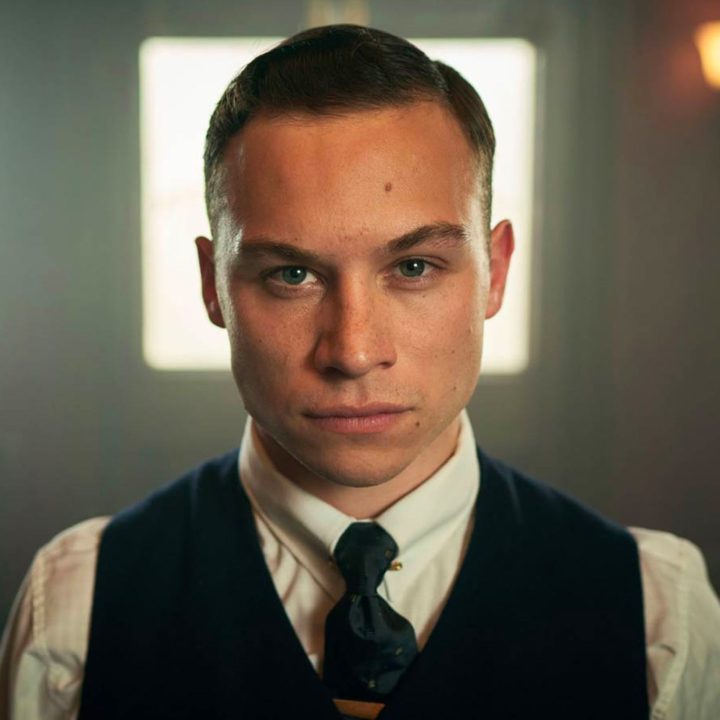 Son of Polly Shelby and cousin to the Shelby brother’s, Michael Gray becomes a high-ranking member of the gang before things turn ugly. His haircut is a classic 1920s side part, and one of the most timeless and traditional styles of all the main characters.

Ask the barber for a classic side part, with tapered sides, cut with scissors. This results in a softer, feathered transition, as opposed to the sharp contrast as seen in many of the show’s other haircuts.

To style, use a blow dryer to push the hair in the direction you want the parting to go. Then use a styling cream or gel for shine and hold, combing it into place. 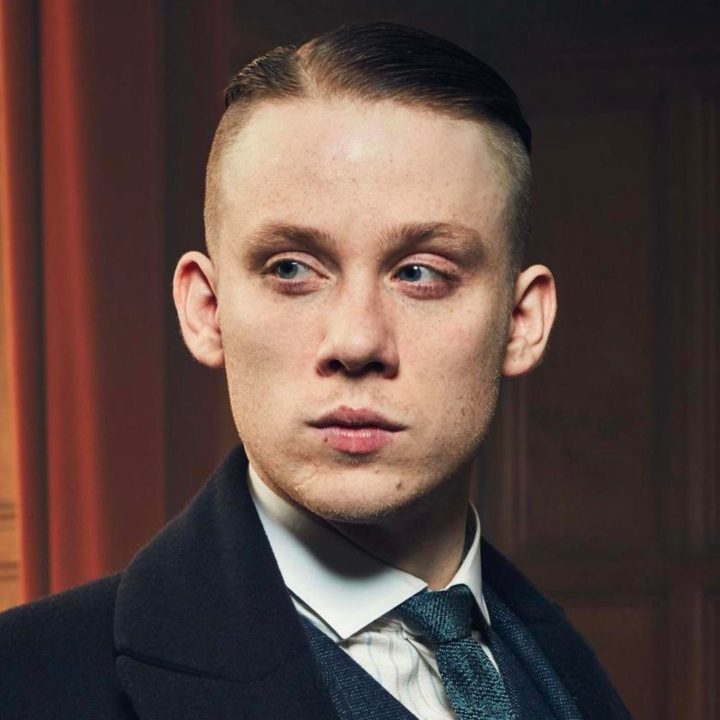 The younger brother of Tommy and Arthur, John sports a shorter version of his elder siblings’ aggressive undercut hairstyles. It’s a great option for anyone who likes the look but wants a neat, relatively low-maintenance alternative to the show’s lengthier styles.

Tell your barber that you want a short side part with a disconnected undercut. Again, it’s always a good idea to take a photograph along for reference, just to make absolutely sure that both parties are on the same page. The barber will cut the hair into a short crop with length just sufficient for it to be styled into a parting.

This style is great as it requires little in the way of styling. Simply arm yourself with some wax to keep the side parting in place and you’re good to go.