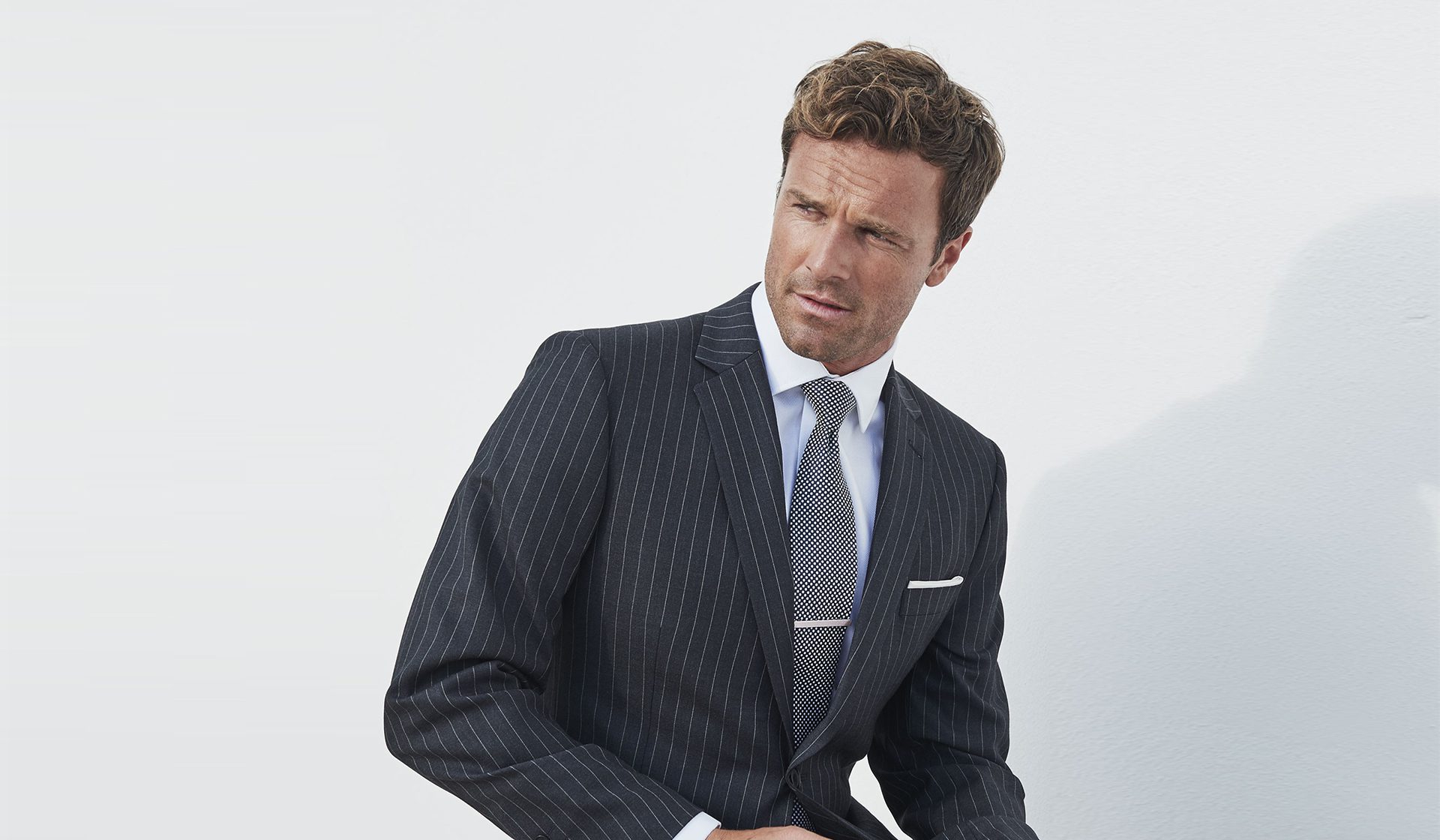 There’s something about the guy in the pinstripe suit that always makes you double-take. It’s not a violation of the eye by any means, but it demands you look nevertheless. The precise vertical lines, whether bold or chalky, just seem to have an unerring knack of announcing themselves long before you’ve even noticed who it is actually wearing them. They are a bold, ballsy, sartorial statement, and ‘twas ever thus.

In the Victorian era, bank employees would don pinstripe suits with certain widths between the stripes to represent the financial institution they worked for. Using pinstripes to delineate different groups or institutions was a sartorial device that the Victorians had already deployed in the world of boating. Stripes were a simple and easily recognisable trope to separate tribes of competing British men, whether on water or in commerce. When the trend eventually sailed across the Atlantic, it was not in tailoring form that pinstripes first landed but in that of baseball uniform, with the Giants, the Cubs and the New York Yankees all adopting the style. The turn of the suit came a decade later in the Prohibition 1920s, when American culture became enamoured by the striped motif, with the pinstripe suit getting top billing in the wardrobes of the power- and infamy-hungry bootleggers such as Al Capone, along with film stars du jour and jazz impresarios.

Quite why the criminal kingpins of the time adopted pinstripes suits is thought to be because the vertical stripes made them look thinner, given many of them had literally fattened up on ill-gained profits. Furthermore, they also saw themselves as legitimate businessmen with sartorial nous, well-dressed pillars of a lawless and dangerous society, powerful men to be respected, all of which seem to be the innate deceits of gangsters throughout time. Mainstream adoption came in the late 30s and early 40s with the likes of Clark Gable and Cary Grant, the former of whom famously wore a pinstripe suit in Gone With The Wind, before the political class sought the strength of the stripe during the Second World War. Messrs Roosevelt and Churchill both favoured the pinstripe, with the latter famously pictured wearing a pinstripe jumpsuit while toting a Tommy gun.

That’s the thing with classic motifs – they never really go out of style, but instead form a constant source for reinterpretation and reinvention. The pinstripe suit has actually been on a tear in womenswear in recent years as the trend for bold boxy tailoring has gripped runways, but what of the men?

Well, recent shows have been full of pinstripes, with Prada, Dolce & Gabbana and Louis Vuitton all experimenting with new takes on three-piece pinstripe suiting. Time to get in line. Before you incorporate pinstripe tailoring into your wardrobe, the first question to ask relates to the stripes, namely how big or bold do you want to go? There are typically two types of stripe, a classic white stripe or a chalk stripe, with the latter being a much softer and less obvious style.

The distance between the stripes also determines how striking you want to appear, with widely spaced white stripes serving up a large dose of impact versus narrow chalk stripes which can seem imperceptible from distance. One thing to consider with the bolder style is that the blazer becomes a much more wearable separate with chinos, and not simply one half of a pinstripe suit. 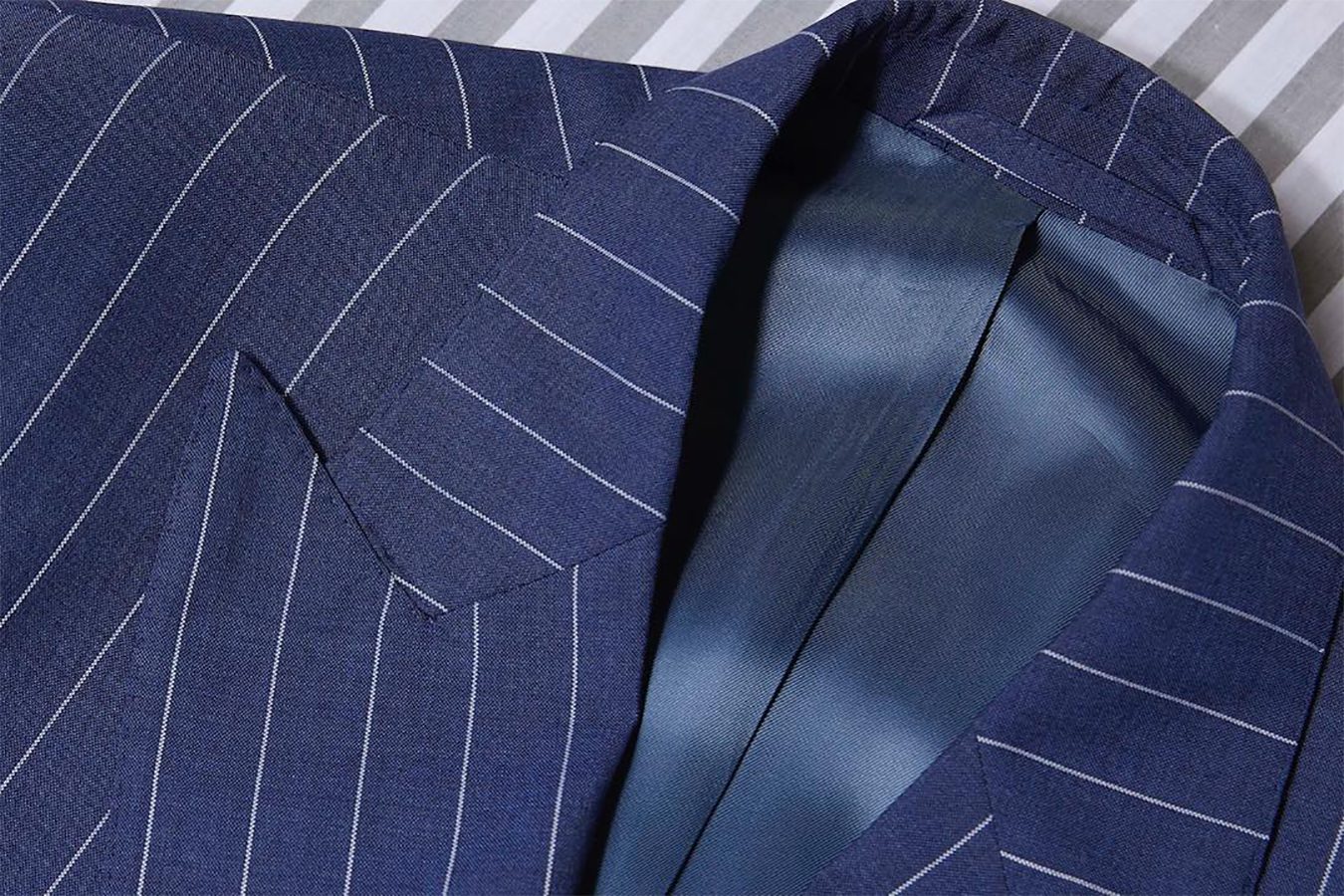 True with all tailoring but especially so here: always go for the best cloth you can afford because a high-quality wool will age that much better than a synthetic mix. Worsted flannel cloth has a beautiful textural quality that works really well with pinstripes and any good tailor will be able to show you a wealth of options. 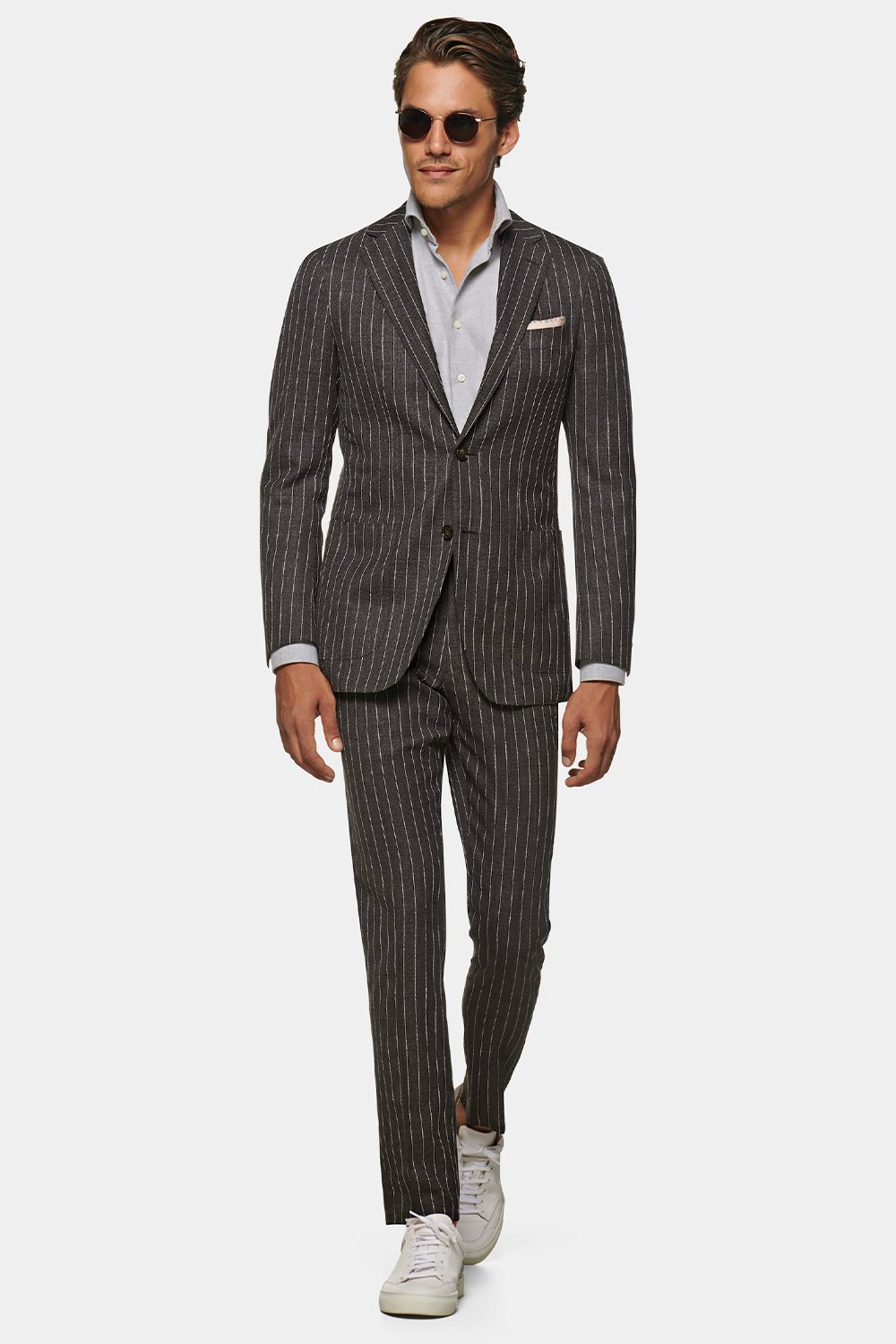 Whether you opt for a blue cloth or a charcoal cloth (or any other colour cloth for that matter) is entirely up to you. A rich navy with bold pinstripes can verge on 80s caricature if one’s not careful or lacks the confidence to pull it off, so we’d recommend a charcoal suit with a chalk stripe as a good pinstripe starter kit, then you can take it from there.

That said, bold blue pinstripe blazers can double up as great other-halves to neutral-toned chinos, white denim or wide-legged trousers so that’s also something to consider. Pinstripes do have a slimming effect too, which is better utilised in a single-breasted cut rather than double-breasted.

You’ll find no end of tailors able to source amazing pinstripe cloth, so if your budget permits then go the bespoke or made-to-measure route. Savile Row is the obvious port of call but we’d recommend scooting down to Knightsbridge and dropping into Edward Sexton, especially if you prefer to opt for a double-breasted suit jacket. Sexton’s chalk stripe DBs are simply stunning and his cutting skills are second to none.

If you prefer a more casual silhouette then Neapolitan tailors are where it’s at with the likes of Rubinacci, Cesare Attolini, De Petrillo and Dalcuore all able to serve up perfectly proportioned slices of pinstriped sprezzatura. If you don’t want to burn an Italian-shaped hole in your new trouser pocket, then there are other good options off-the-peg.

Suitsupply, as ever, delivers excellent value and offers some great cloths by the likes of Vitale Barberis Canonico. For more contemporary fits, Paul Smith and Hugo Boss are great options, while at the cheaper end of the price scale, Reiss and Charles Tyrwhitt are well worth a look.