I generally tell people to avoid buying a watch for the investment. It’s not exactly the most volatile market in the world (it’s won’t bankrupt you) but there are so many new pieces released each month, including limited editions, that it’s impossible to know what’s going to stick. Often, it’s best to just buy what you like. If it makes money, great; if not, you still have a timepiece you love.

That said, there are some key models out there that will always be worth more than their weight in gold – the kind of timepieces that have entire tomes written about their design choices. They’re the only constant in watchmaking and are the handful of pieces that will always (generally speaking) go up in value.

Most are still in current collections, but with waiting lists that make them more of a time investment than anything else. That is, of course, unless you go for pre-owned. Waiting be damned; the classics are always the classics. With that in mind we’ve teamed up with Watchfinder & Co. to showcase five models that are as close to a guaranteed investment as you’re likely to find. 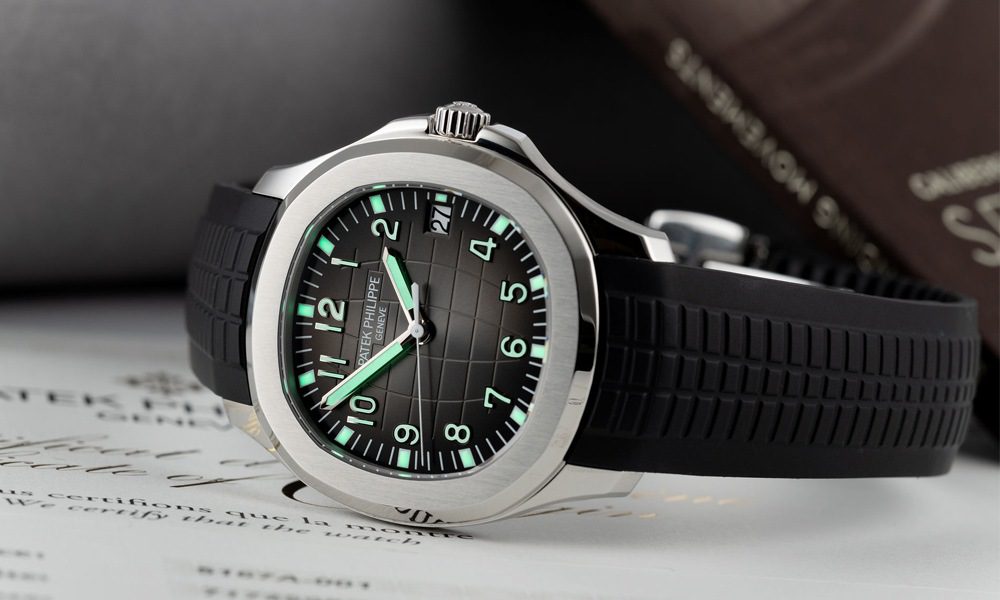 Sure, it’s all about the Nautilus in most collecting circles, but truth be told there’s not a great room for appreciation in those prices now. They are wince-inducingly expensive no matter where you look; you can get a Patek perpetual calendar for cheaper. The Aquanaut on the other hand has yet to be hunted to near extinction. It lacks the muscular shoulders of its older brother, but it shares the same sports luxe style that made the Nautilus an icon, from the integrated bracelet to the porthole-shaped bezel in an arguably more wearable format.

As Patek Philippe continue to play hard to get with the Nautilus and collectors look for alternatives to their favourite watches, the Aquanaut is perfect to fill that very particular void. It’s also – and here’s the clincher – a hell of a lot easier on your bank balance. The Royal Oak is the definitive model of the 1970s. Designed by watch design maestro Gerald Genta, it was the first steel sports watch priced up there with gold and a big, bold, disruptive statement of intent. It’s one that Audemars Piguet has been working with ever since and, aside from the occasional concept and the overcompensating Offshore chronographs, it’s barely changed in all the years since. The standard Royal Oak still has its octagonal bezel, complete with visible screws, and its industrial, integrated bracelet.

There might be quite a few Royal Oaks out there, with more being produced each year, but demand hasn’t exactly waned. Get it in the blue and you can find a buyer at a moment’s notice. If you can bear to take it off, that is. Rolex doesn’t have the only Submariner in the game and Tudor’s is arguably more iconic in collecting circles. It came to define Tudor back in their early years and is a good indication of why they’re so popular now, with the Submariner laying the groundwork for the incredibly popular Black Bay. What you’re essentially getting is a Rolex for less money, but with the same build quality inside and out. Even if it doesn’t have the resurgent Tudor snowflake hour hand, it’s still a lot of watch for the money.

Collectors are starting to snap up old Tudor models with almost as much fanaticism as Rolex and the younger brand is only on the up. If you want a slightly cooler alternative to a modern Tudor – and potentially a better investment – a vintage Sub is a good bet. The Daytona is a legend. It’s arguably the most iconic watch ever built and continues to command incredible prices at auction, especially for the lusted-after Paul Newman versions with their high-contrast subdials. By those standards, the newest Cosmograph models are at the kiddie end of the pool. That said, they are still Daytonas and the white-dialled steel version especially is a handsome piece – at the time it was the model’s first major upgrade for a decade and a half, introducing a touch of Cerachrom to the mix.

Of course, when anyone talks about waiting lists and watches, this is the piece they mean. If you want one any time soon, the only way to do it is to buy pre-owned. You’ll likely pay a bit of a premium, but it’s one you can more than make back if you decide to sell it on in a few months. Take all of the points I just mentioned in the Daytona and apply them here. The “Batman” colourway – featuring a black and blue bezel – is the latest version of the GMT Master II and, while not as famous as the Pepsi Cola’s red and blue, is still a lusted after watch. The case shape has been changed a little from the original run of GMT Masters, making it a newer interpretation rather than a throwback, much like the Cosmograph to the original Daytonas.

Once again you’ll pay a premium to get it on your wrist right away, but I don’t imagine the waiting lists getting much shorter for this particular piece – arguably one of the coolest modern Rolexes for a good while. If that’s not worth an investment, what is?

Effortless Cool: Everything You Need To Know Before Buying A Leather Jacket

The Most Impressive New Timepieces From LVMH Watch Week