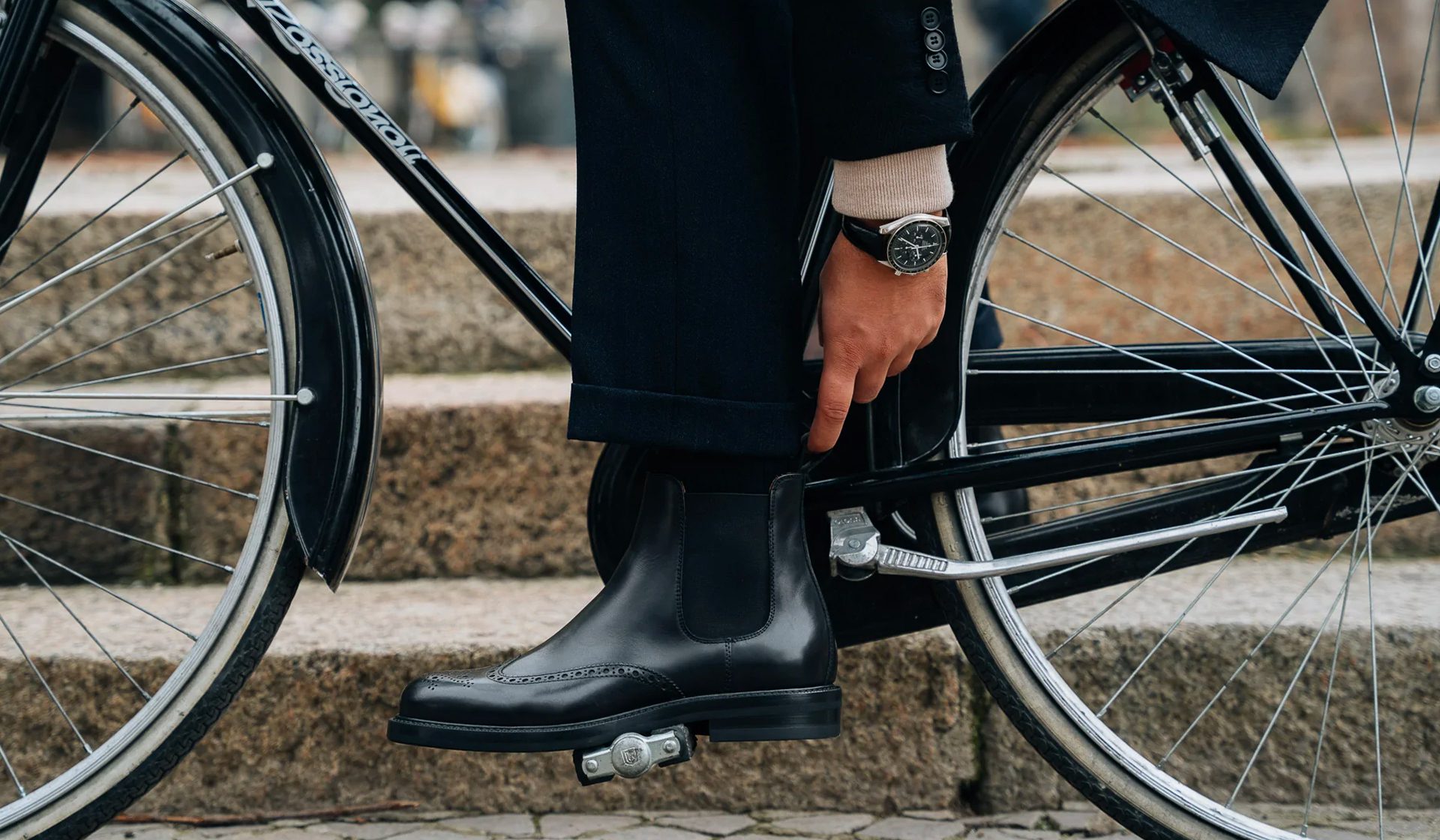 Fashion is a pendulum, swinging in perpetual motion. No matter how surefooted the styles of the time may appear to be, eventually things will begin to move in the opposite direction. We’ve gradually watched formal footwear silhouettes die out to be all but replaced by sneakers, and now, decades later, we’re beginning to watch smarter shoes and boots reemerge.

Dress boots are one such style. The likes of brogue and Derby boots have been scarce on the streets for a long time now. Once the go-to everyday shoes for men, they were toppled by more casual designs that became popular in the early-to-mid 1900s, including things like chukka boots and sneakers. But as tailoring regains a foothold in mainstream menswear, it’s time to start paying these formal stompers some attention again.

Of course, dress boots never went away. The same brands that have been making them for centuries have kept churning them out decade after decade, unconcerned with fluctuating mainstream shoe trends. Here, we’ll take a look at some of the best you can buy right now, as well as explaining what exactly a ‘dress boot’ is, and when the best time might be to pull a pair on.

What Is A Dress Boot? So, what exactly do we mean when we talk about ‘dress boots’? In short, it’s an umbrella term that covers a number of different types of footwear. We’ll go into the specifics of those later on, but generally speaking, a dress boot is any type of boot that can be worn with tailoring.

They’re usually simple, free from excessive detail or branding, and made from smooth leather as opposed to suede. Dress boots also tend to have a low-profile sole. This is often made from leather, particularly where the classic Northamptonshire brands are concerned. If it has a chunky commando sole slapped on the bottom of it, it’s going to jar against the clean, sleek lines of a pair of dress pants.

One exception to the detail rule is broguing. This is the term used to describe the decorative perforations in a shoe or boot’s upper. They’re usually laid out in swirling patterns, and were originally designed for British country boots to allow water to escape when wading through marshland on shoots. Many brogue boots can still be considered ‘dress boots’ in today’s use of the term.

Which Boots Are Dress Boots? Chelsea boots feature a simple upper with no detail and no laces. Instead, they employ an elasticated panel to each side of the ankle to allow the boot to be pulled on and off with ease. They were popular with the mods of the 1960s, who teamed them with slim-fitting Italian tailoring, and they’re still great for adding a bit of character to tailored looks today. Derby boots are essentially just Derby shoes that extend further up the ankle. Just like their low-top counterparts, they feature an ‘open’ lacing system, which means the eyelets are stitched on top of the vamp, leaving a gap at the bottom.

It’s a traditional style that has been around for hundreds of years, and makes a great alternative to a Derby shoe during the colder months. Again, Oxford boots are just a loftier version of Oxford shoes. Unlike Derby boots, they feature a ‘closed’ lacing system, where the vamp is stitched over the eyelets so that they’re tight together when laced up.

It looks smarter and sleeker, but isn’t a great option for those with wide feet. Oxford boots, although less common these days than Derbies, are really the quintessential dress boots. As mentioned above, brogue boots feature elaborate perforated patterns to the uppers. Worn by the landed gentry, this was originally a feature designed to let water escape when wading through marshland shooting game, but it has stuck around as a decorative quirk to this day.

When To Wear Dress Boots

The best time to choose dress boots over shoes is during autumn and winter. The taller shape offers more protection from the rain and cold, and the smooth leather is better suited to wet weather than other materials, like suede or nubuck.

Seasons aside, the other thing to consider is the setting. Dress boots are supposed to be worn with smart outfits, so it’s best to save them for formal events and special occasions. If the dress code requires you to wear some sort of tailoring, dress boots will generally work nicely.

The Best Brands For Dress Boots Mryqvist is a label with one clear objective: to enable more men to enjoy the luxury of handmade footwear. The Swedish brand achieves this by operating a direct-to-consumer model, which means no retail markup, lower operation costs. This allows the brand to deliver premium shoes at affordable prices.

Myrqvist’s range covers all sorts of footwear, from Oxfords to luxe sneakers, all handmade in Portugal using high-quality materials from France and England. There’s even the option to have bespoke shoes made to order.

As far as dress boots go there are a number of great styles to choose from. We’d recommend taking a look at the Tjärnö and Abisko boots: both classic Derbies with different levels of detail. Direct-to-consumer brand Velasca is all about making the best possible shoes with the lowest possible price tag. Everything is handcrafted by skilled artisans in Italy’s shoemaking capital, Marche, with all the quality and attention to detail you’d expect from the region.

We’re particularly fond of the Lampionèe Chelseas, which feature wingtip broguing to the toe for a bit of extra character. 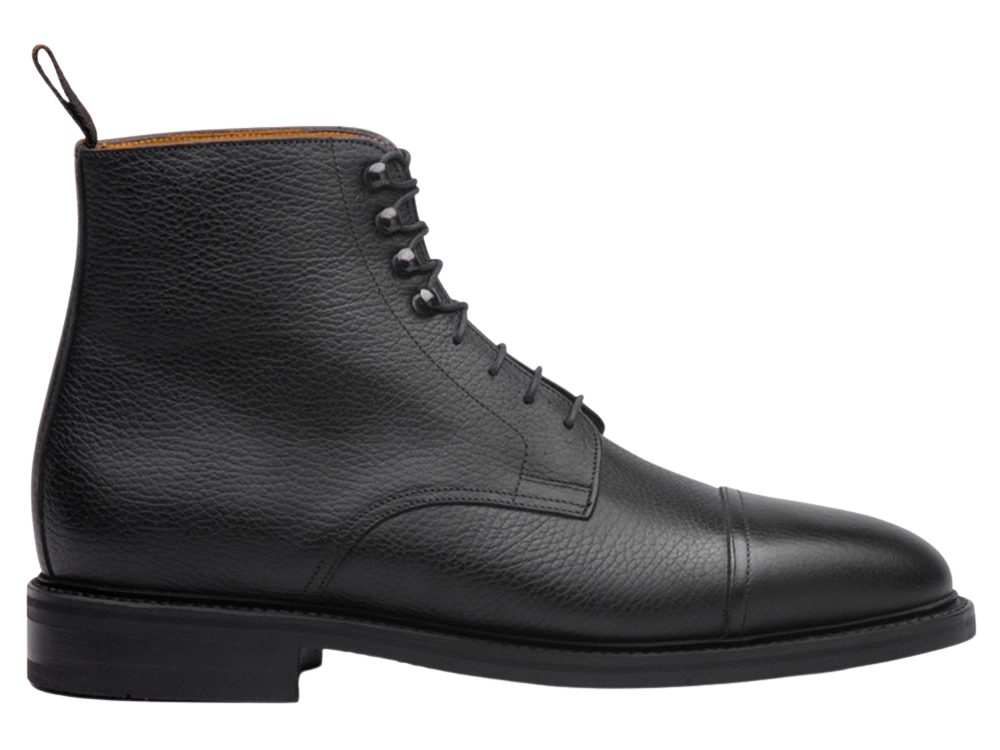 Morjas is another direct-to-consumer footwear brand that focuses on timeless style and quality materials, aiming to deliver the best possible shoes and boots for the lowest possible expense.

The label offers a range of lace-up and slip-on boots styles to cater to all tastes and occasions, all featuring the same high-end materials and artisanal craftsmanship. Grenson is one of the original Northamptonshire shoe brands, and has been crafting classic but characterful footwear in its historic factory for more than 150 years. Some of the first styles Grenson ever made were boots, and it still carries an excellent selection to this day.

The Fred brogue boot is a bestseller, for good reason, but if you’re after something even more traditional, check out the confusingly named Shoe No.1: a classic Edwardian toe-cap boot that’ll perfectly complement a nice pair of tailored trousers. Australian brand R.M. Williams has been making its iconic gusseted riding boots for almost a century. Originally aimed at ranchers, bushmen and farmers, the label has more recently moved into the luxury market, producing a full range of high-end leather goods, including shoes, boots and even clothing.

The Craftsman boot is R.M. Williams’ signature style, and is essentially a Goodyear-welted Chelsea boot, handcrafted in Australia. The oldest shoemaker in Britain, Tricker’s has been crafting handmade shoes and boots for country pursuits since 1829. The brand is best known for its brogue designs, which are still handcrafted in England to this day, but there are plenty of other options available too.

The Burford Plain Derby Boot, for example, is a classic style that sits firmly in the dress boot category. It features a smooth upper, free from broguing, and is available with either a Dainite or traditional leather sole. John Lobb is a family-run shoemaking business now in its fifth generation. The brand specialises in bespoke shoes and boots, uniquely fitted to each individual customer, and as a result makes some of the finest boots money can buy.

In addition to the bespoke offering, John Lobb also carries a range of ready-to-wear footwear, including classic dress boot styles like the Alder Derby boot. British brand Crockett & Jones has been hand-making some of the finest shoes and boots on the planet since the 1800s. In that time, it has produced footwear for some big names, including royalty, and even James Bond.

In fact, Crockett & Jones has been 007’s go-to label for a number of films, with the brand’s wares featuring in Skyfall, Spectre and No Time To Die, to name a few.