With watch design you can always instantly tell what’s wrong, but putting your finger on precisely what makes a design right is much harder. When you’ve stripped a timepiece down to its basics you have nowhere to hide.

You can’t confuse the eye with complications or dazzle them with diamonds. It’s just a dial, a bracelet and a case, which is precisely what these brands have decided to focus on – perfecting that particular triumvirate in the pursuit of minimalism. With the odd added date window for some panache. 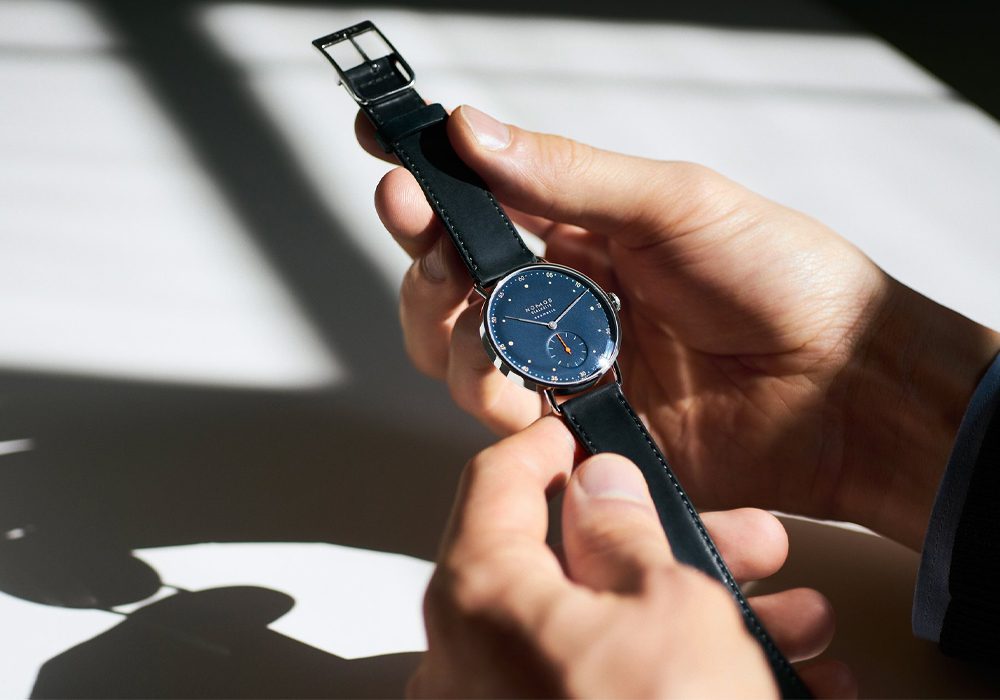 Set up in 1990 after the fall of the Berlin Wall, Nomos made it clear from the beginning that it would be singing from the Bauhaus hymn sheet.

Its watches are the embodiment of form following function; they are minimalist and simple. Nomos as a company has used technology to build components – most notably its swing system, which is the brand’s own escapement.

Despite residing in Glashütte, Nomos cannily keeps a design studio in Berlin, so it can soak up cultural inspiration from one of Europe’s coolest cities. Its output may have become a bit more jazzy in recent years, with the addition of the Autobahn collection and hot pink and orange cropping up as dial colours, but this is still a stereotypically German watchmaker that likes to keep things as no-frills as possible.

The One To Buy: Metro Date Power Reserve 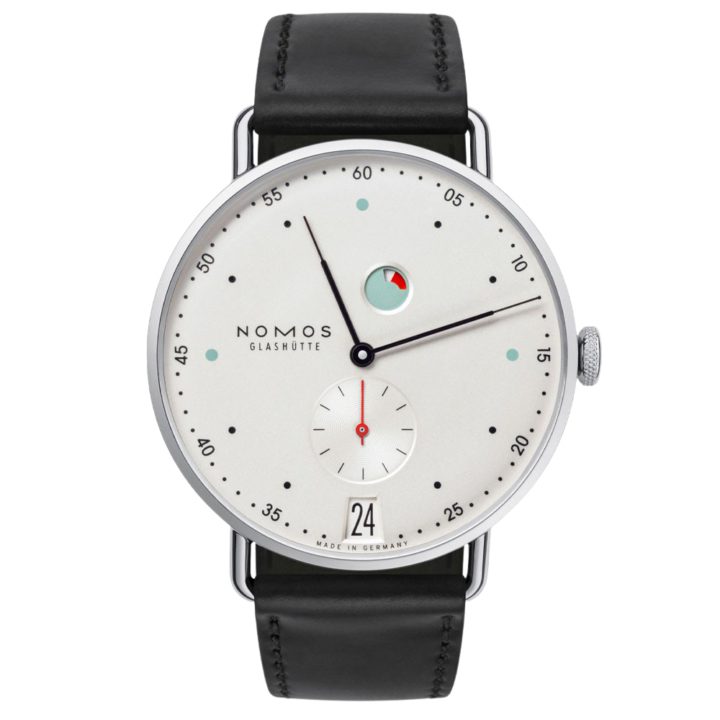 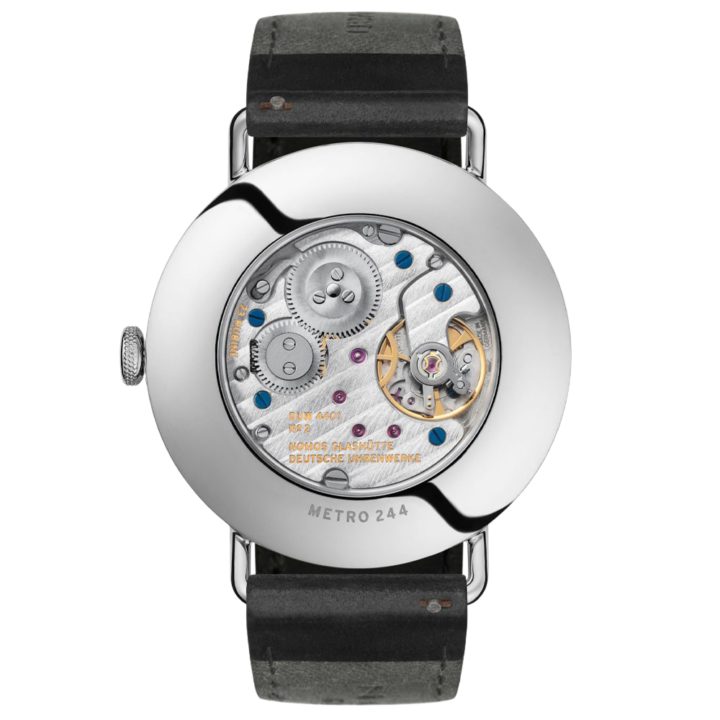 While it’s tempting to opt for the Tangente, the watch that started it all, this feels like the most Nomos watch of the collection.

Designed by Berlin-based product designer Mark Braun, it is full of clever details, such as the colour change power reserve, which is slightly off centre, the gentle doming and then flattening of the crystal, or the lack of hour numerals with only sea-green dots at 12, 3 and 9.

It’s not quintessentially Nomos but it’s a quirky design that pushes the Bauhaus boundaries and has a little fun. 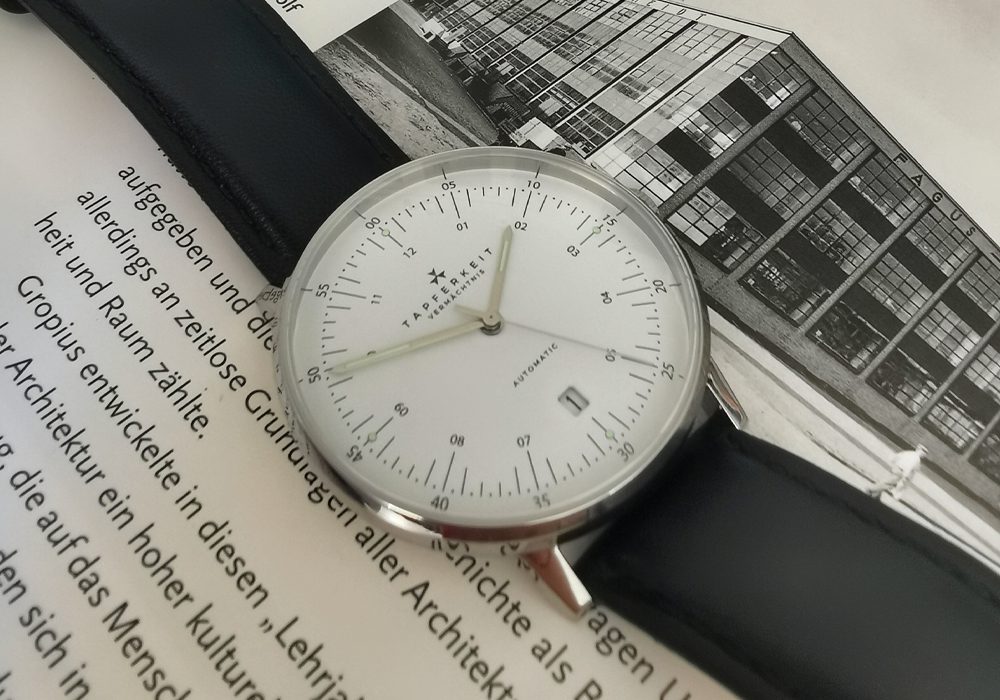 Another Bauhaus-inspired brand (minimalism is one of the 10 principles, so this is to be expected), but this time set up by a Brit. James Horner loved Bauhaus design but wasn’t so keen on the price of the watches inspired by this aesthetic. So he decided to set up a brand offering high-quality Bauhaus-inspired timepieces for much less money, naming it after the German word for ‘courage’.

The look of the dial is perfect: elongated indices, unobtrusive numerals, beautifully tapered hands tipped with lume. The colour palette is muted, mostly black and white with the odd blue or cream, and the collection comprises just five different styles, including a quartz-powered chronograph.

The cost of the automatics is kept down by using Miyota movements, which would once have been cause for snobbishness but now seems like good sense. These watches aren’t breaking any design boundaries but if you like the look and don’t want to pay a premium, they’re ideal.

The One To Buy: Freiheit Automatic Cream 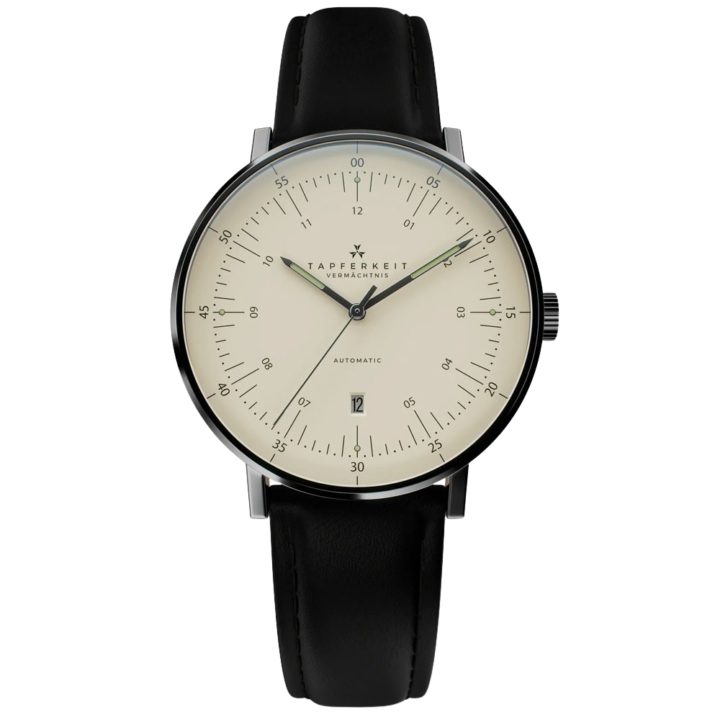 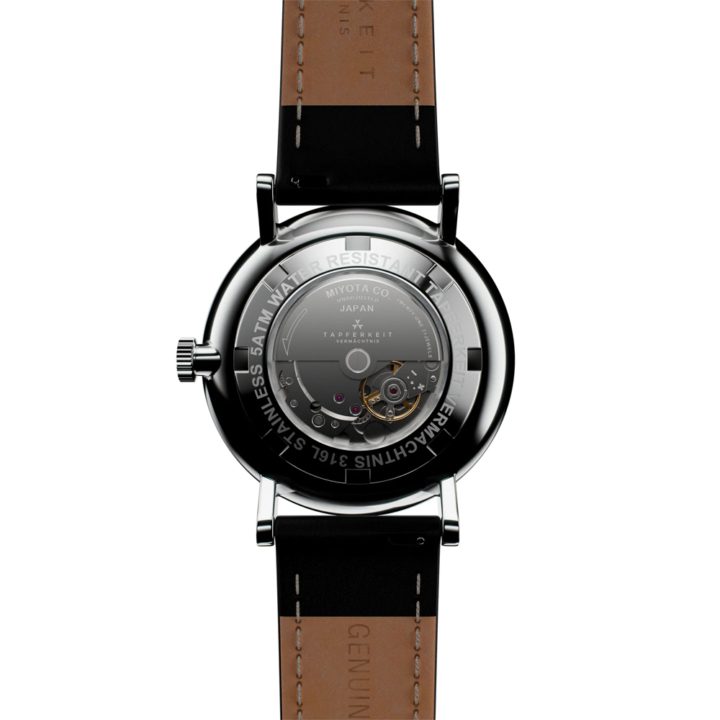 This looks the most Bauhaus of the collections. Restrained design, very little in the way of extraneous detail, and the cream dial gives it a vintage air that makes it a bit more interesting than the white version.

There’s also a choice of strap and the crystal has recently been updated – it’s now anti-reflective sapphire. 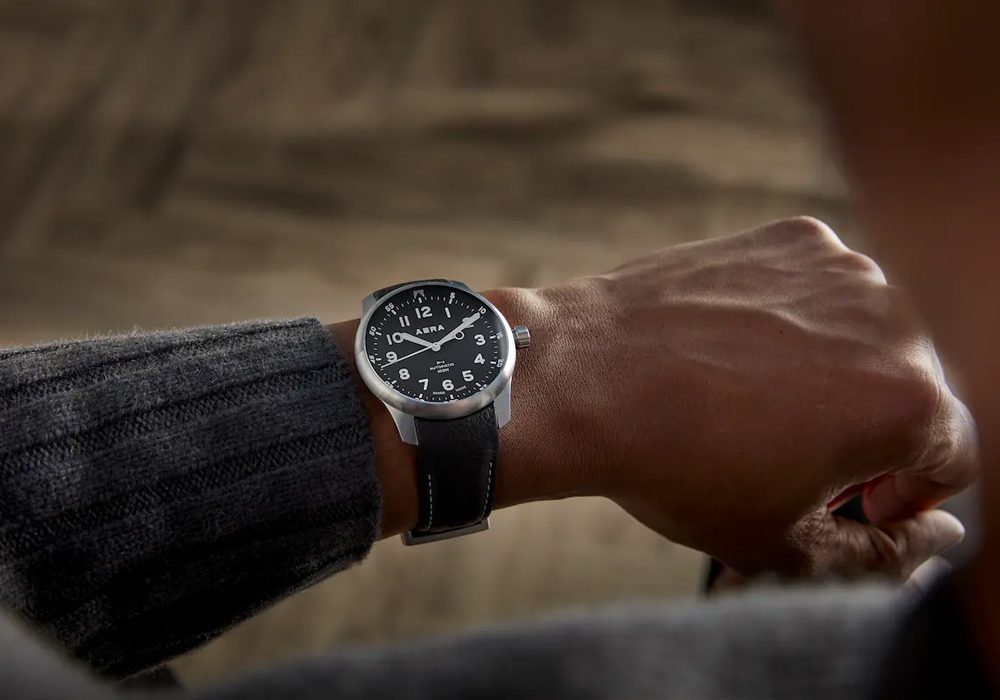 Set up in 2018 by a group of watch lovers, two of whom, Jas and Olof, met at Marc Newson-era Ikepod (an influence that can be detected in the smooth pebble-like case of its P-1 Pilot), this brand is so minimalist that at the moment it only has two watches in its collection. But what superb watches they are.

Aera has started with what it deems the two styles everyone wants in their collection: the diver and the pilot’s watch. The former ticks all the right boxes – chunky tactile bezel, superb SuperLuminova, 300m water resistance – but it is the latter where you really see the attention to detail and the team’s obsession with good design.

First, there’s the dial, which is concave. Rather than achieve this effect with two pieces, one for the sides the other for the centre, it is a single entity; something that took years to achieve. This had the knock-on problem of not being able to print on the dial, which has a matte velvet finish, so the lume had to be applied by hand.

Both designs have interchangeable straps, with a free strap with every purchase. Aera shows that marrying form and function can having sometimes surprising results. It will be interesting to see what it launches next. 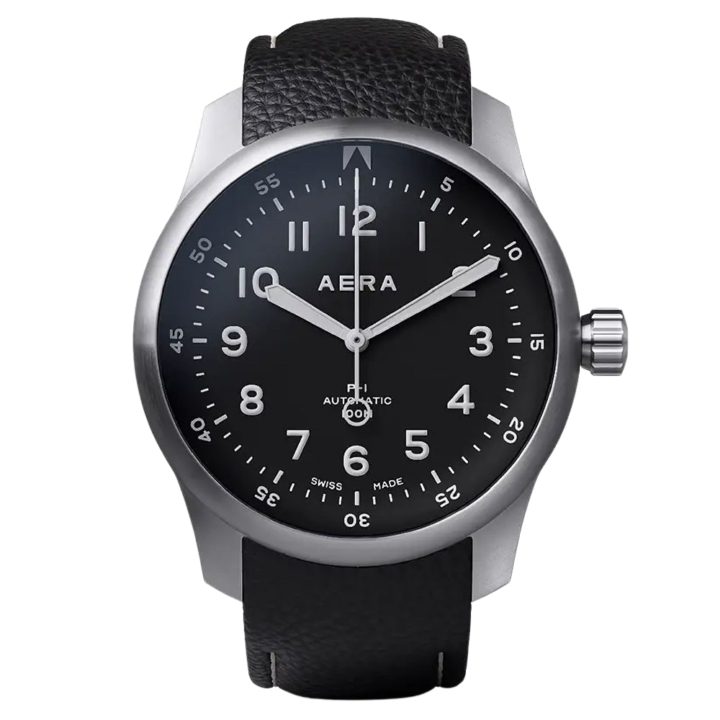 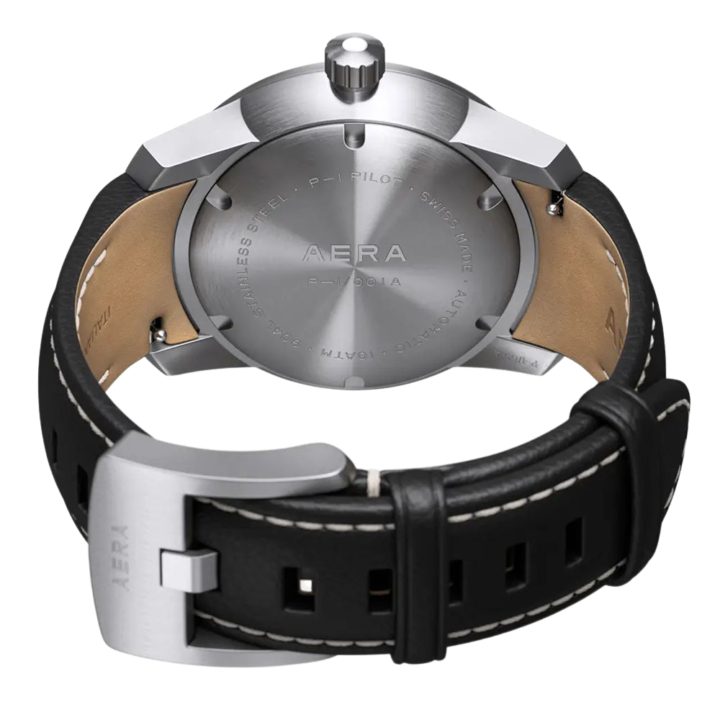 For all the reasons listed above. But also because, despite being 43mm, it wears very elegantly on the wrist. 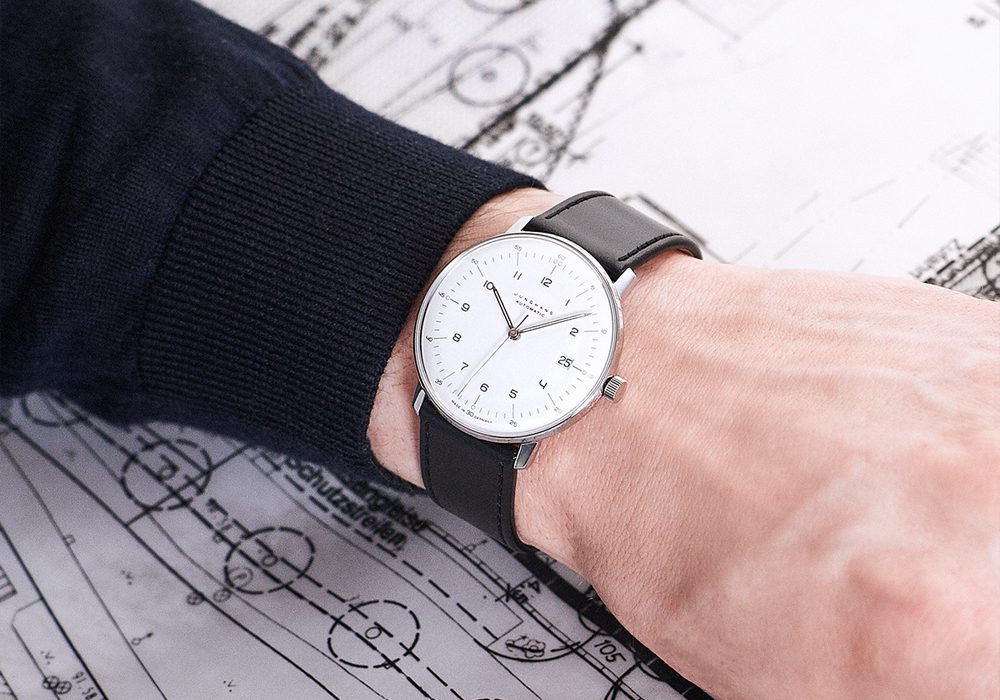 Not content with perusing the Bauhaus playbook, Junghans, founded in 1861 in Schramberg in the Black Forest, had an actual Bauhaus designer on its books – Max Bill. This Swiss architect, artist, painter, typeface designer, industrial designer and graphic designer designed wall and table clocks, and, of course, watches for Junghans during the 1950s and 1960s.

His love of geometry and mathematics was incorporated into his watches, which today remain beautiful examples of pared-back design. Even the chronographs feel miraculously uncluttered. It is not just the timepieces bearing Max Bill’s name that are minimalist masterpieces – its Meister range is too, with the only touch of flair being its signature bowl-like sub dials.

In keeping with its ethos of keeping prices down, the mechanical watches are powered by Swiss movements, but Junghans does produce its radio-controlled movements in house, from R&D and programming through to assembly.

The One To Buy: Max Bill Automatic Bauhaus 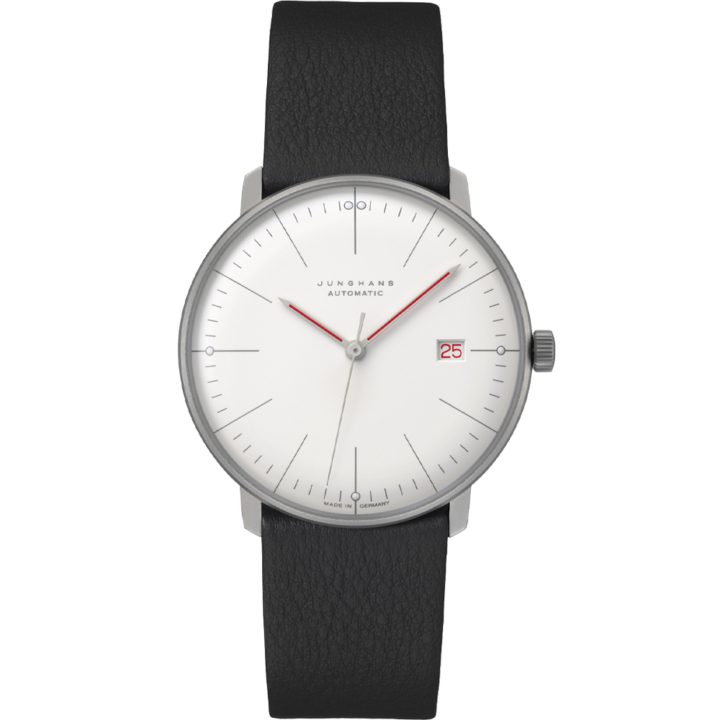 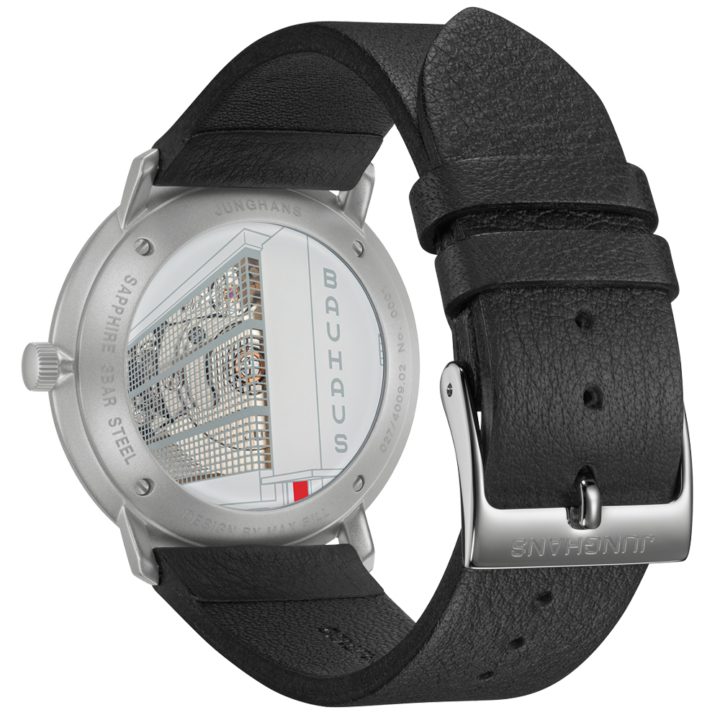 This version of the classic Max Bill was launched to tie in with the 100th anniversary of the foundation of the state-owned Bauhaus, whose window façade of the Dessau academy building is rendered in cut-out form on the back of the watch.

The famed red door is a colour accent on the case back, with its shade replicated on the hands and date. It is deceptively simple, stylish, and a timeless timepiece. 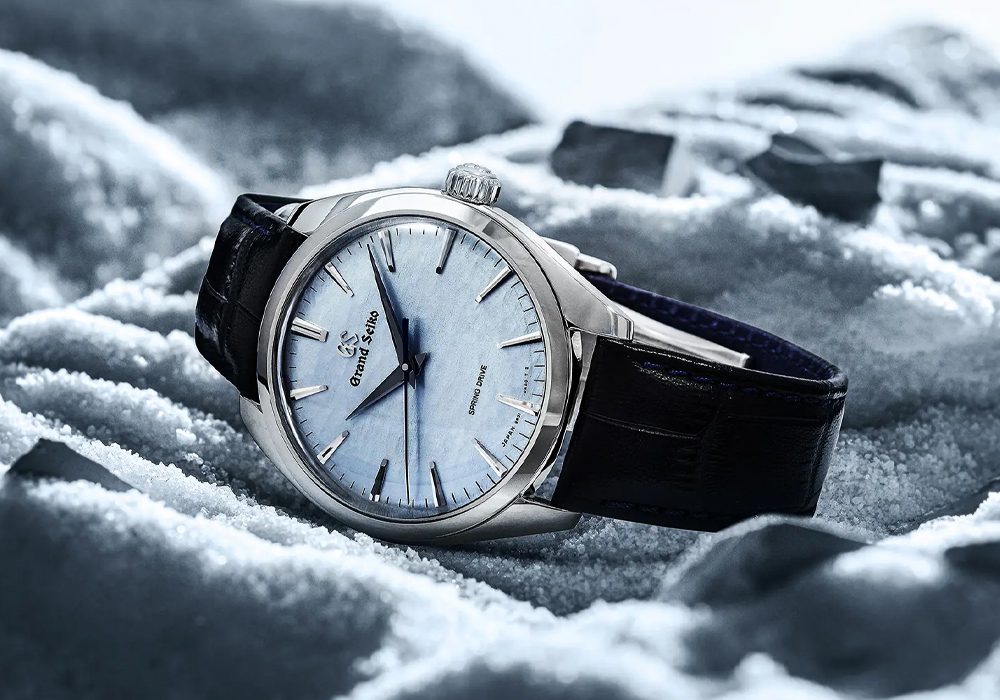 Japanese watchmaker Grand Seiko was born out of Seiko’s desire to create the ideal timepieces, which all sounds rather… OK, we won’t use the B-word again. However, it does feel like a kindred intellectual spirit to that particular German movement.

There are other connections, such as the German insistence on there being no border between artist and craftsman. And the idea that the artist is an exalted craftsman, which is basically about removing the hierarchy between the two terms and recreating them as equal.

At Grand Seiko techniques such as polishing are elevated to art forms, while dial finishing is used to evoke such things as the way snow falls outside its Shinshu Watch Studio or the particular green of Japan’s mountain forests. Artist as craftsman, craftsman as artist.

There is also the insistence on precisely tapered indices, slim hands and little dial adornment. Things do get messier around the Chronograph GMT collection; however this isn’t what watch aficionados would recognise, and what they love, about Grand Seiko. It is its commitment to less definitely being more.

The One To Buy: Grand Seiko Spring Drive ‘Omiwatari’ 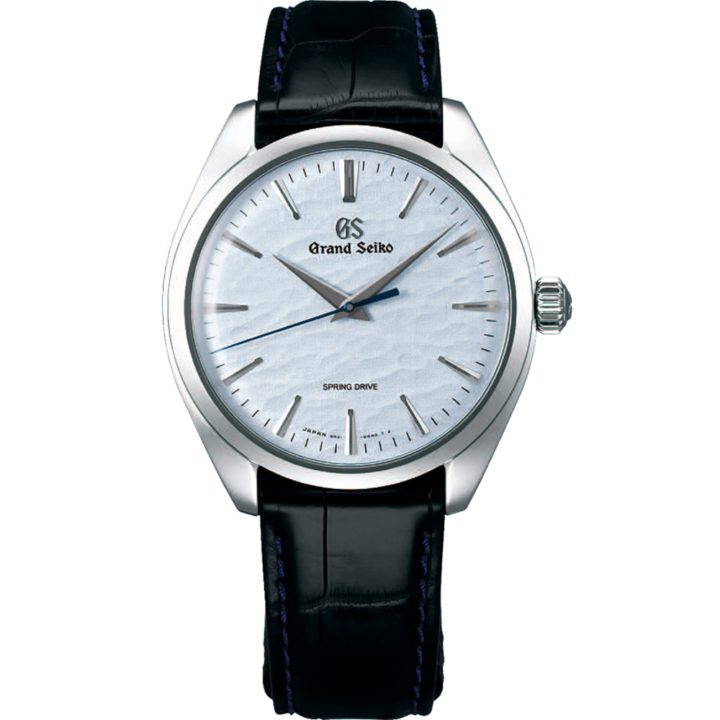 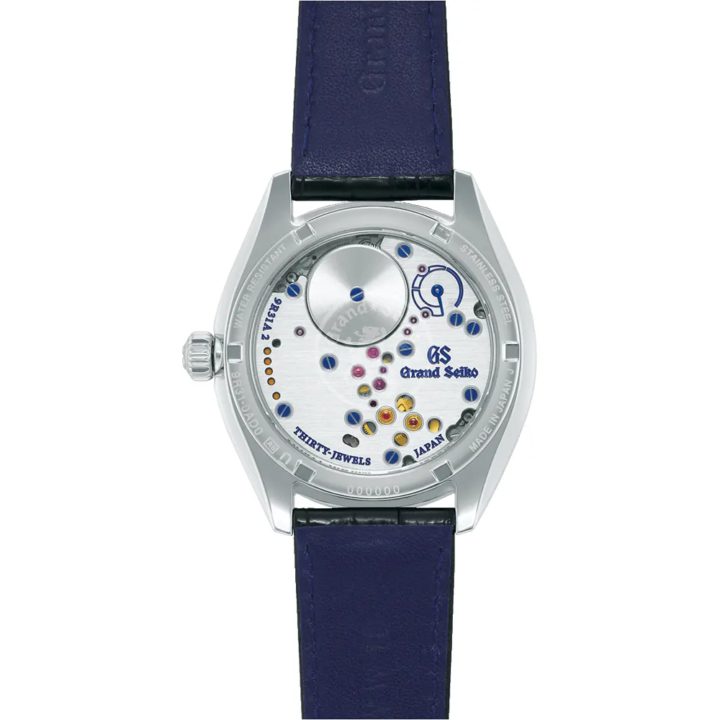 This is a classic Grand Seiko: three hands, no date, Spring Drive movement and romantically named dial. This one is named after the mysterious midwinter phenomenon called omiwatari, which occurs on the frozen surface of Lake Suwa, near Shiojiri, where the Spring Drive movement was conceived.

Omiwatari refers to ice ridges created when changes in temperature cause the frozen lake to stretch and contract. Their direction and height is said to predict the new year’s harvests and good fortune. 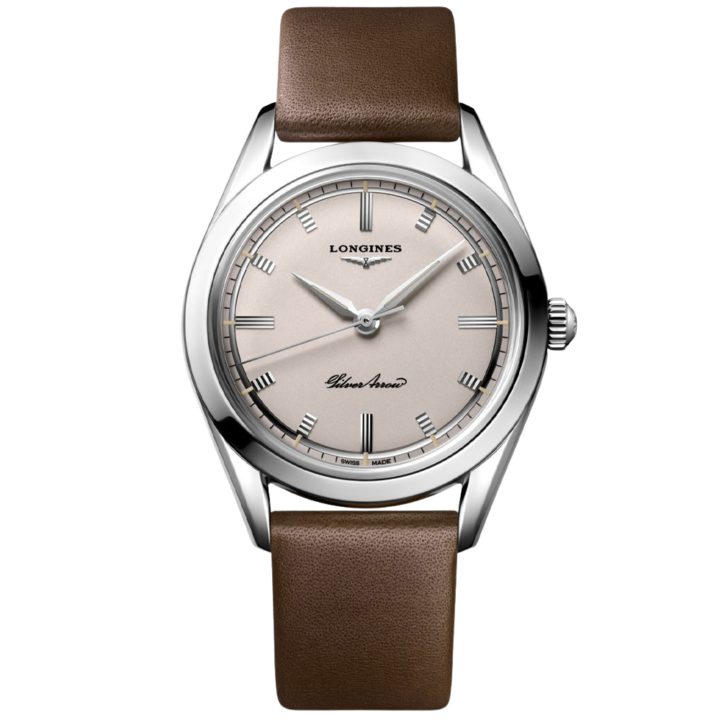 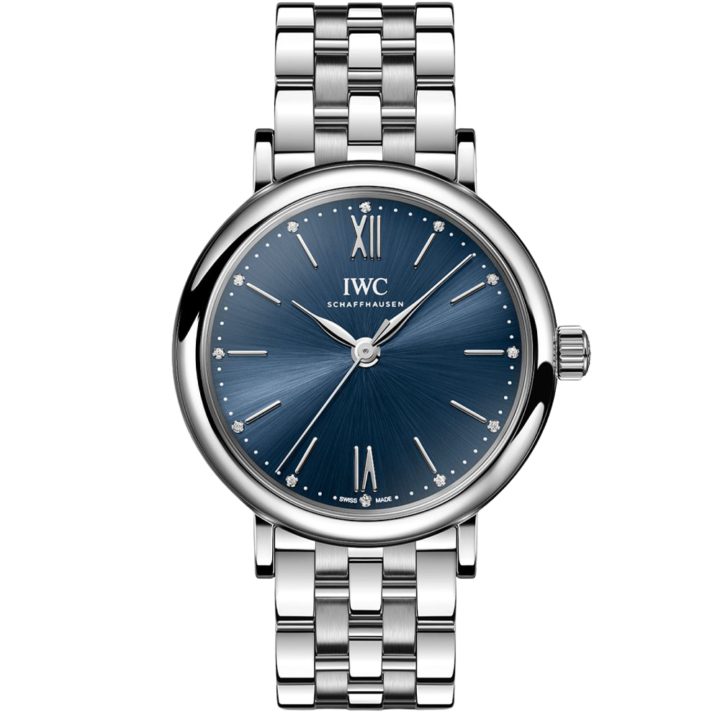 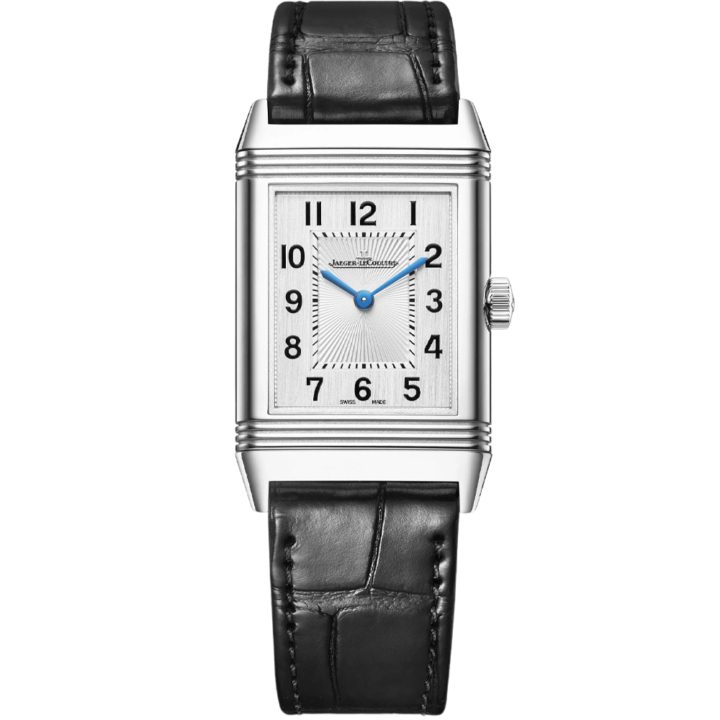 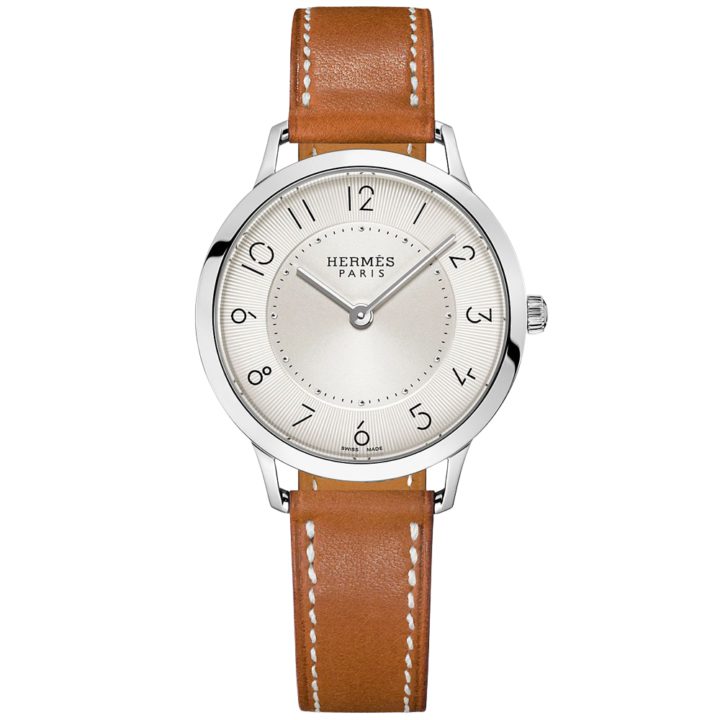 The larger the brand, the less it can be described as minimalist across the board. But there are some individual collections that fit the pared-back bill. Longines’ Heritage Collection, for example, is a masterful reworking of the brand’s past. The fanciest it gets is a chronograph, and even that is done with restraint – the only extravagance being the blued hands and tachymeter in a similar shade.

IWC’s Portofino is a collection that revels in getting a just a few details perfect; it even manages to downplay diamonds.

At it’s purest, Jaeger-LeCoultre’s Reverso is fabulously no-frills, as it should be for a polo watch, while its Master Ultra Thin also majors in minimalism.

Then there’s Hermes’ Slim d’Hermes, in its time-only iteration. With its specifically designed typeface, slender case and tone-on-tone dial and sub dial, it’s so chicly French – a country whose post-revolutionary style never had much in common with maximalism in the first place.