Choosing the 10 best watches of the year is always going to be difficult. Do you choose the ones you think will stand the test of time? Or pick the ones that blew you away today but that you know are going to fall out of favour? Does public opinion matter or just your own?

For this top 10 (plus a special mention) we’ve selected the watches that surprised, delighted and that, hopefully, will still be on people’s wish-lists in a decade’s time. We know we’ll have missed off some of your favourites and that there will be inclusions with which you’ll disagree. In which case answers on a postcard, please. Probably best to use a first-class stamp. 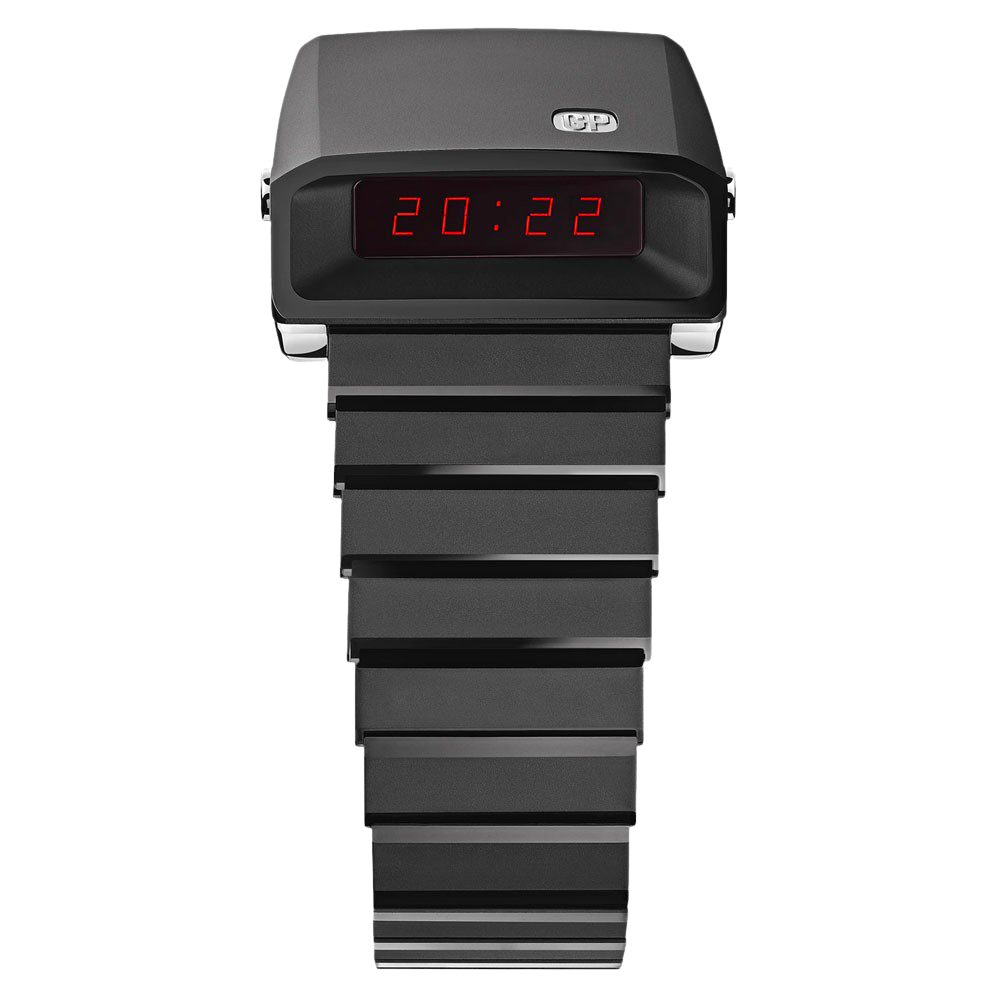 Girard-Perregaux is usually associated with elevated watchmaking, experimentation with bridges or slinky sports styles, so when it resurrected this amazing design from its back catalogue, it certainly turned heads. The original was made from 1976-1978 and only 8,200 were made, so obviously it attained the ‘cult classic’ status.

Version 2.0 has been upgraded – slightly larger and made from ceramic and titanium – but it still has the iconic case design that manages to look both retro and futuristic. It’s a vintage revival like no other. 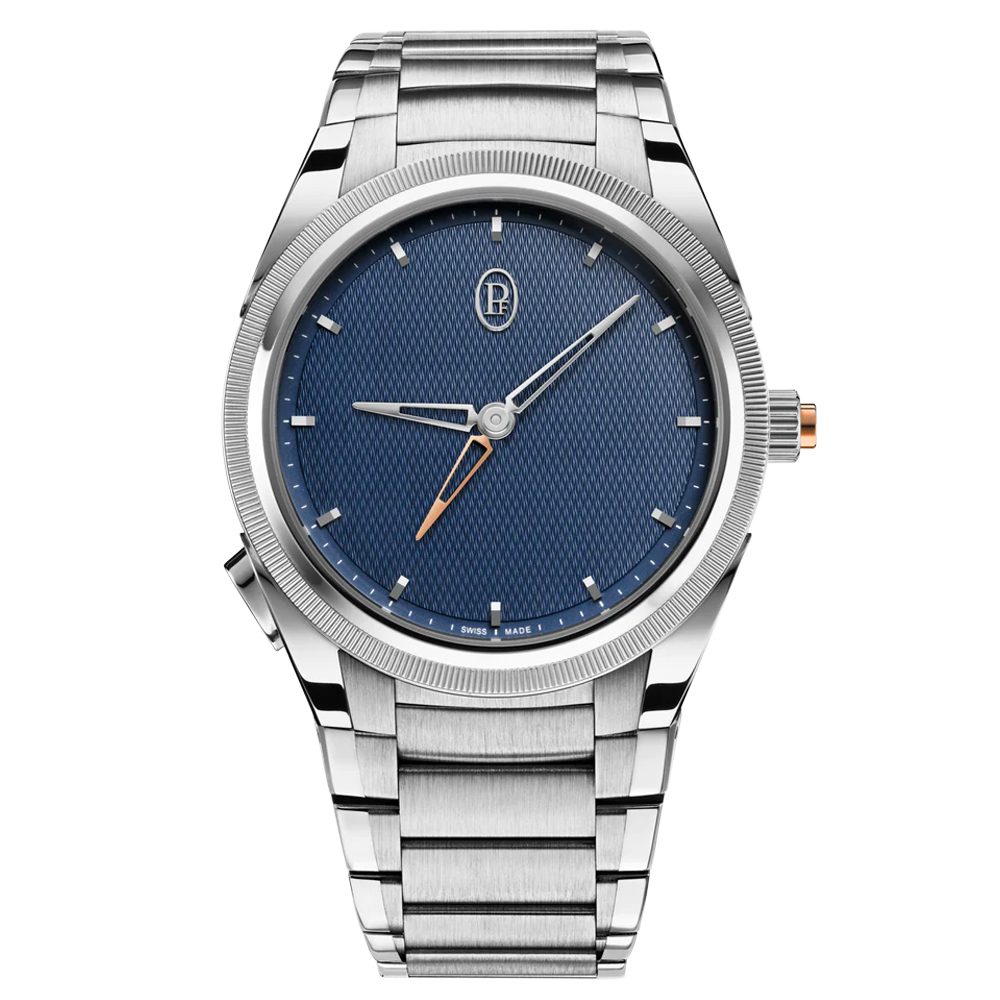 There is something so elegantly nonchalant about the second time zone function on this watch, you wonder why people haven’t done this before. Technically, it is neither a GMT nor a rattrapante, however that’s just quibbling because what this is, is beautiful.

Use the pusher at eight o’clock and the hour hand, in white gold, will start to jump by hour increments, revealing a rose-gold hand left behind to indicate your home time. Once you’re home again, use the rose-gold pusher integrated into the crown and it will slip discretely back under the hour hand again.

No hard to read 24-hour timezones, ‘where’s the manual?’ setting complications; just a single hand and a pusher. Simple. 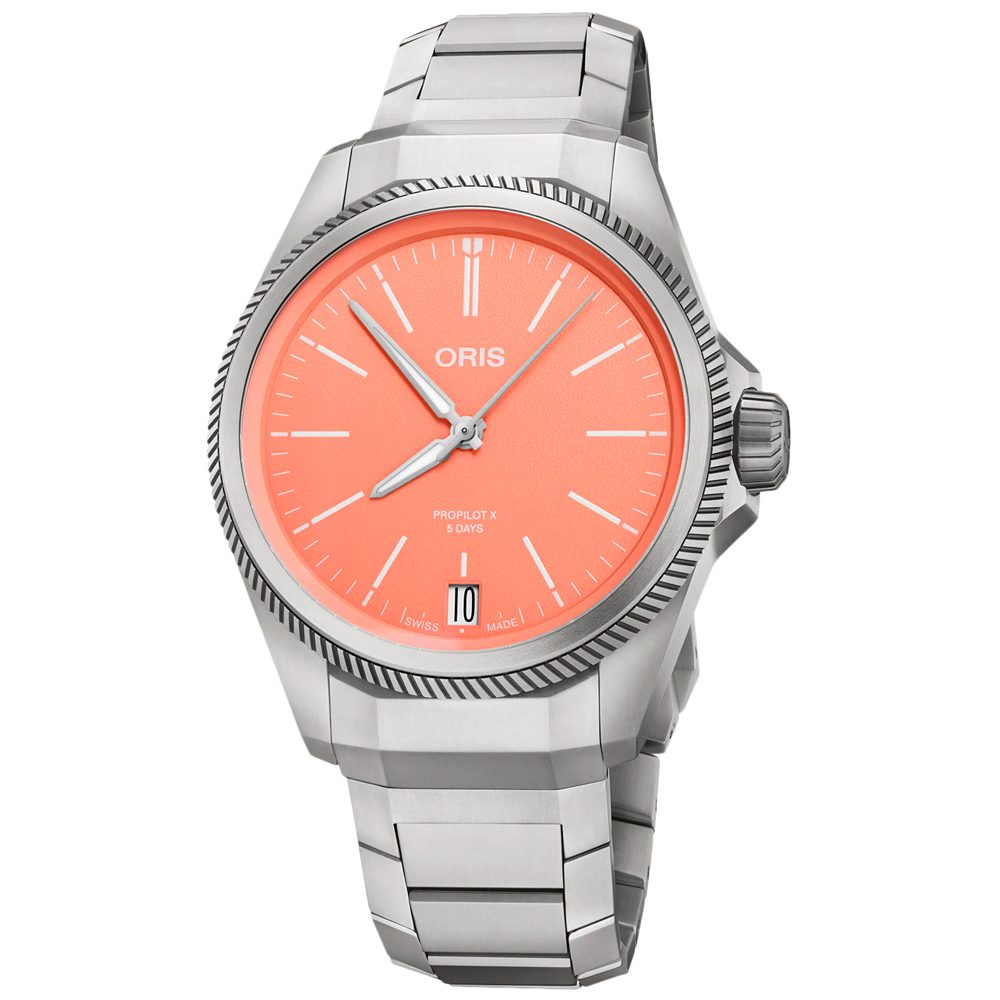 This watch is so good looking it will make you feel inadequate. On paper, it’s a titanium sports watch with a slightly off-kilter dial colour but the desirability is all in the details.

There’s the soft yet angular lines, which have led to fighter jet comparisons – something that is emphasised by the dull, not-quite-grey of the titanium. This masculinity sits in stark contrast to the ‘salmon meets PeptoBismol’ dial but, somehow, they complement each other perfectly.

Powering it is Oris’s incredible Calibre 400, which has a 120-hour power reserve and only needs to be serviced every 10 years. If you only want one watch, not a wardrobe, this is well worth getting your credit card out for.

Buy now at Watches of Switzerland 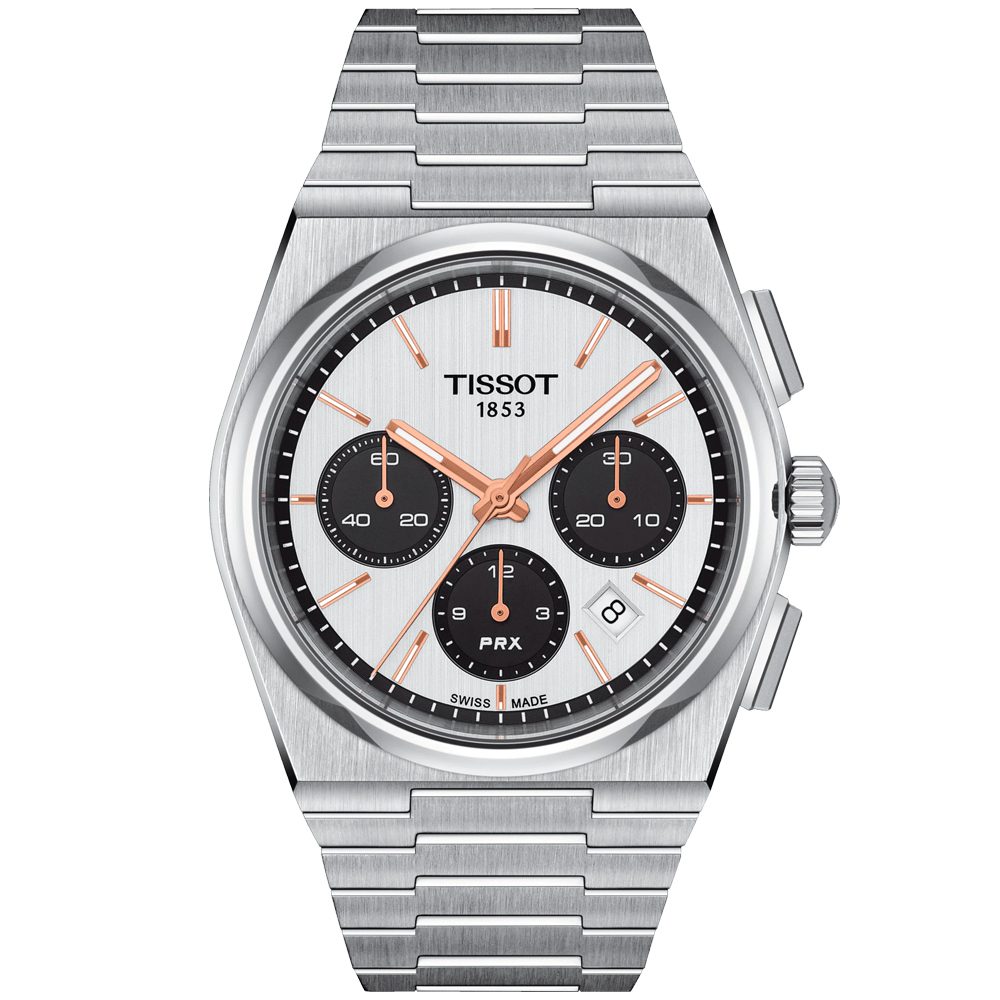 Well-priced bracelet styles were a bit of a theme in 2022. Following on from Oris’ triumph is Tissot’s. Last year, Tissot unveiled the PRX, which was inspired by the Seastar – a quartz model the Japanese watchmaker had in its collection in the late 1970s.

This year it upped the ante, and the allure, by adding a chronograph. Now what you have is an integrated, steel bracelet watch with 70s design cues. Remind you of anything? Luckily you don’t have to take out a second mortgage or sell a kidney to afford this particular timepiece.

There is a reverse Panda – dark blue dial with white sub dials – but the Panda with the rose-gold-coloured hands and indices has more panache. Keeping things ticking is the ETA A05, which is based on the Valjoux 7753, with a 60-hour power reserve should you want to take this off your wrist. But really, why would you? 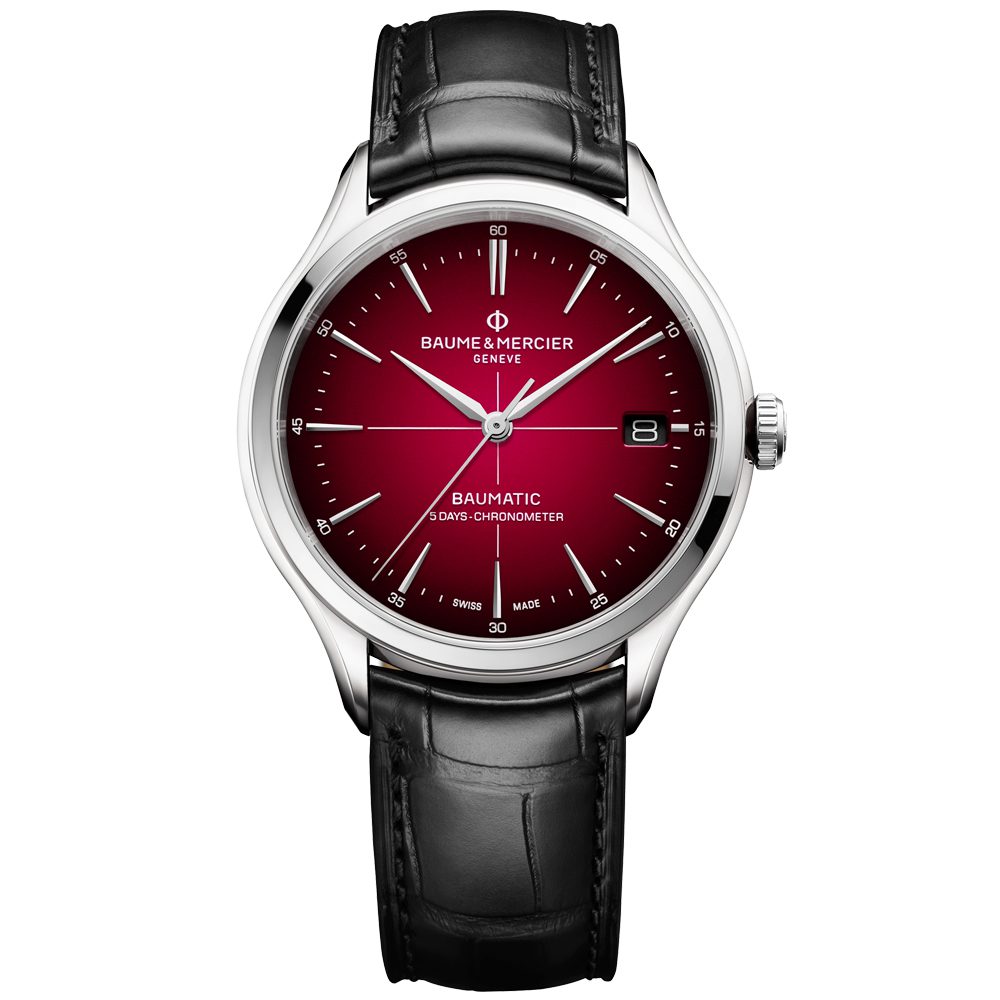 When it comes to the Richemont brands, Baume & Mercier flies under the radar, which isn’t surprising as its stock in trade has usually been polite watches for people who want something nice but don’t really care about design. Until now that is.

Red dials aren’t for everyone but if you’re after a colour and are bored with blue, then this Clifton would be the ideal switch up. The rich burgundy isn’t garish, the cross-hair detail brings sophistication, and you can even swap the strap, should you fancy matching it to the dial for a bolder look.

It’s smart enough to be a dress watch, yet the steel case means you could wear it every day – in short, it’s the ideal all-rounder. 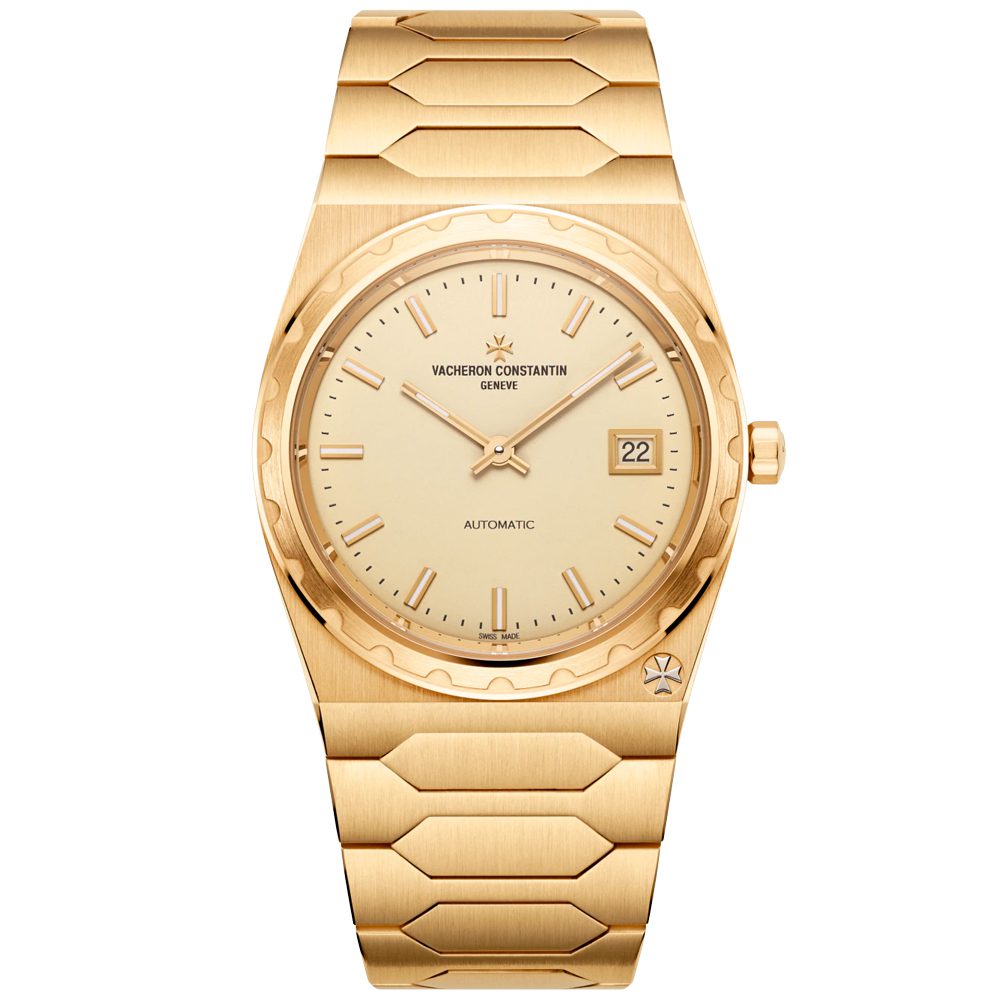 When it launched in 1977, the 222, designed by Jörg Hysek to commemorate the brand’s 222-year anniversary, completed the triumvirate of integrated steel bracelet sports watches, joining the Royal Oak and the Nautilus as style markers of a decade. The first two continued to be remember; the 222 only by a few. There’s no chance of it being forgotten again.

This isn’t just a gold version of the original 222, it is a new and improved update. The bracelet is better, the hour markers enlarged and doubled up, and the dial is also in gold to create the illusion of a seamless transition from it to the bracelet.

The movement is now Vacheron Constantin’s own creation, the 2455, not the Jaeger-LeCoultre-inspired 1120. If you’re going to revive a watch, this is the way to do it. 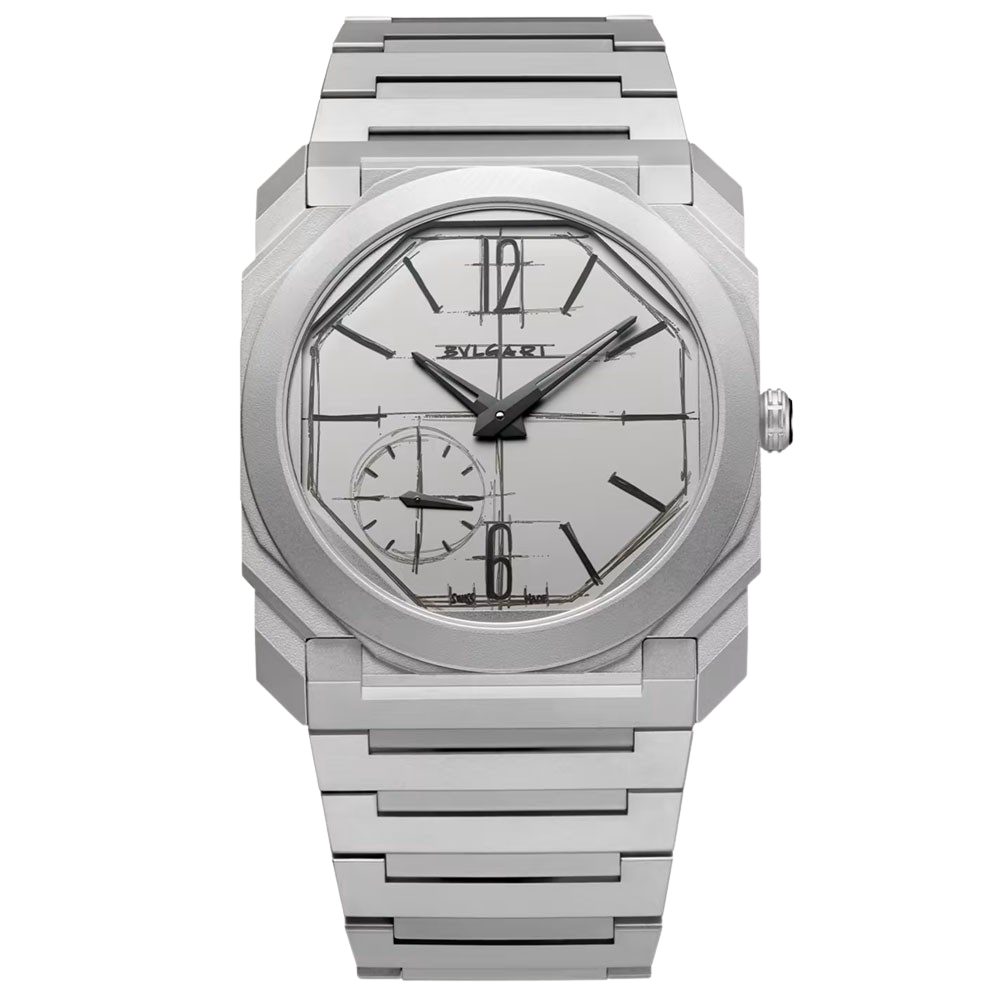 If you know one thing about Bulgari’s watches design centre director Fabrizio Buonamassa-Stigliani, it is that he loves to draw. Every new launch from the brand is accompanied by images of him and his sketches. And now his etchings have made it onto a dial.

This isn’t just a random doodle, it is his first sketch for the Octo, a collection which now has a silhouette as recognisable as the Royal Oak or the Submariner. The sandblasted titanium adds to the rough-and-ready aesthetic making this limited edition feel like owning an exclusive prototype.

It is a lovely nod to the artistic talents of the man who has transformed Bulgari’s standing in the watch world. 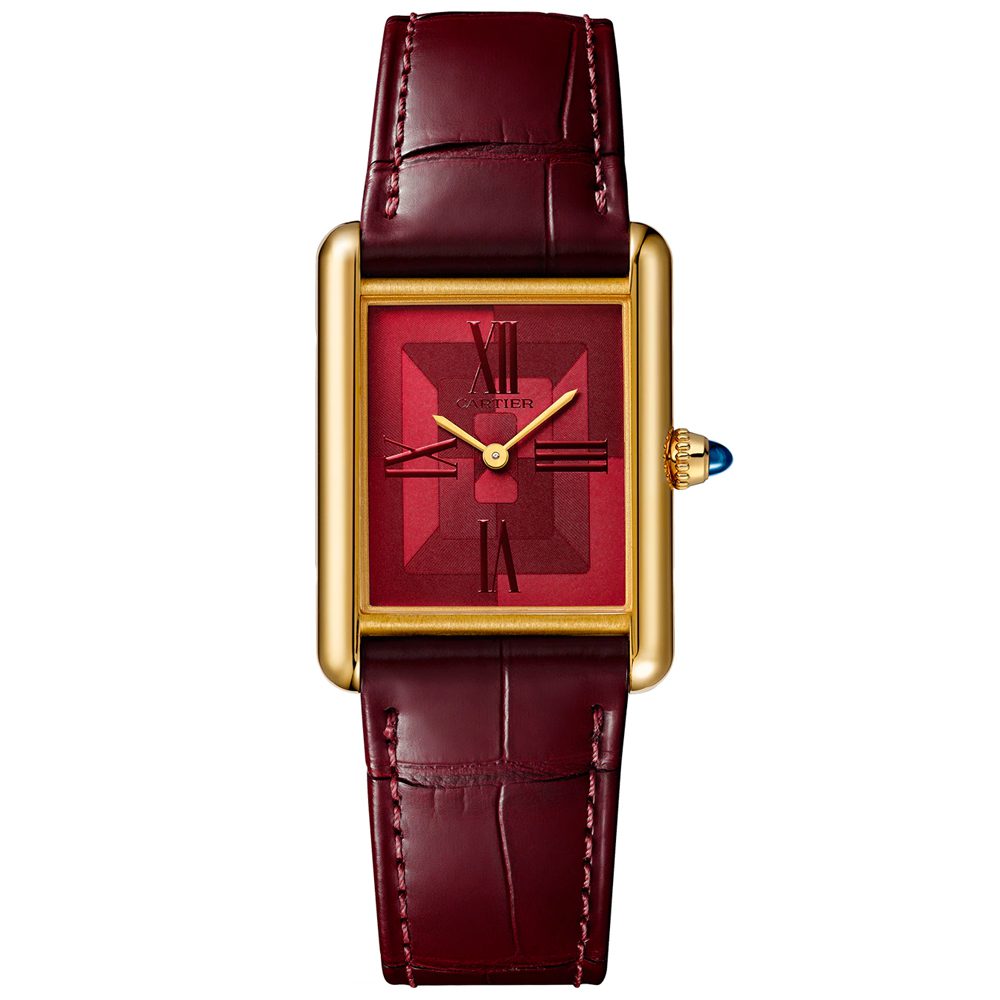 Cartier tends to launch watches you admire rather than ones you fall in love with. That is not the case with this Tank Louis Cartier. The Tank is one of Cartier’s most iconic designs, created in 1917 by Louis himself with a case inspired by the Renault F-17 tanks.

It has had many iterations and reinterpretations. This handsome manual-wind version is more dress than sports watch, with its burgundy dial reminiscent of book-lined rooms in gentleman’s clubs.

Red dials are slowly creeping from the periphery into the mainstream, being a bolder colour than blue and more interesting than black or white. This shows how sophisticated this shade can look.

The mesmeric patterning created by a brand-new electrochemical engraving technique lends an Art Deco air, while the yellow gold case brings some of that decade’s decadence. 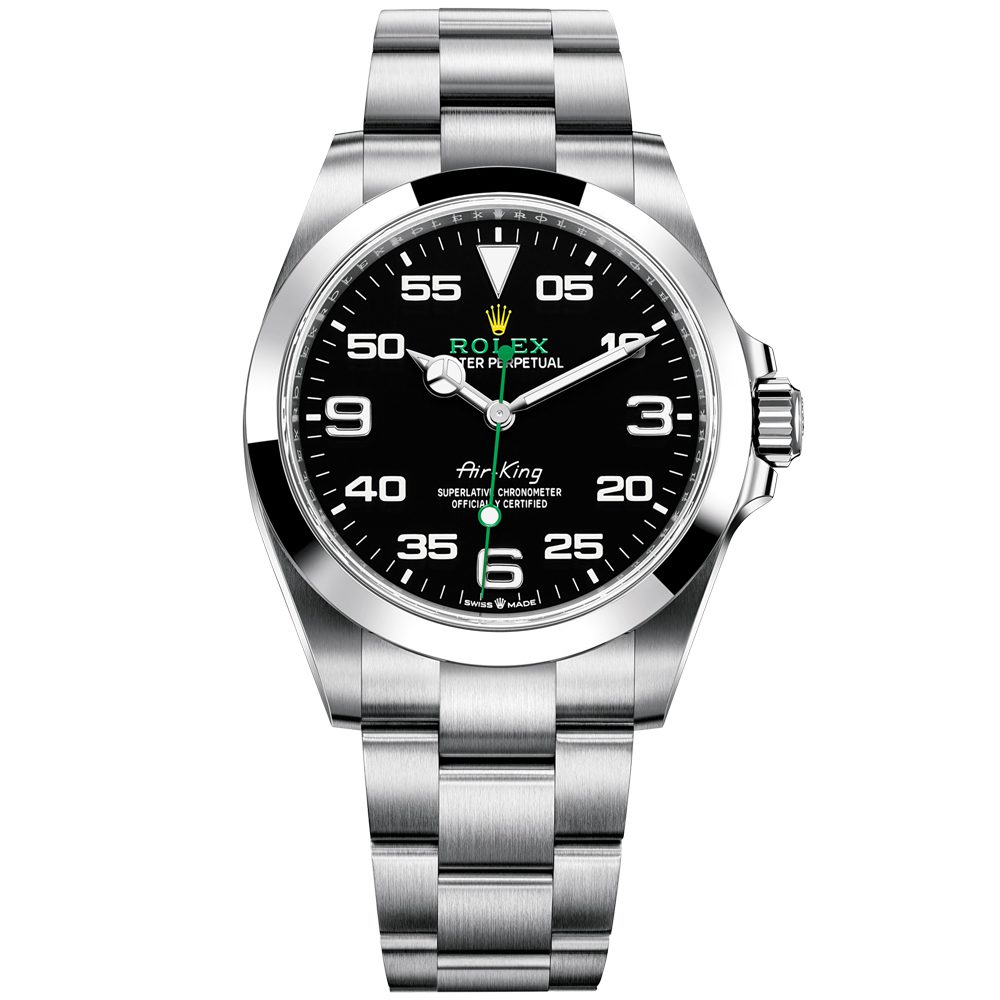 Yes, this was the year that Rolex launched its GMT Master II Destro, which garnered most of the column inches, but the real connoisseurs’ eyes were on the new Air King. The original was from 1945 and was Rolex’s homage to aviation.

It was discontinued in 2014 only to pop up again in 2016 in a 40mm redesign, with hour markers at 3, 6 and 9 and the crown motif in yellow. The reception was muted. The lack of crown guards and curved case sides meant purists didn’t consider it a true Rolex tool watch, and it’s obviously not dress, which left it category-less.

Now it’s back again. With crown guards. And a straightened-out case. And people are much happier. It also has a new movement inside, the calibre 3131, which has reduced the case from 13.1mm to 11.59mm making it easier to wear. The Destro’s fun, but this is the real Rolex of 2022. 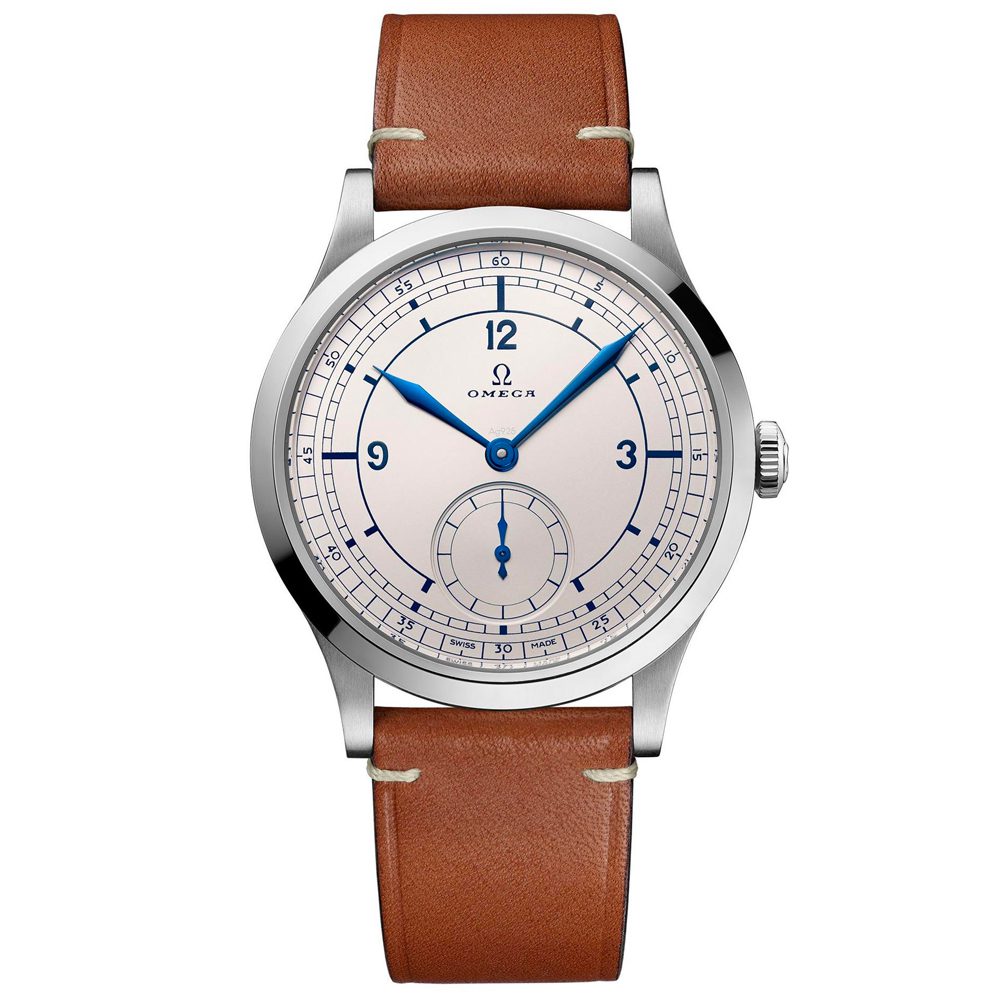 Behind all the Bond noise, and transforming its Ultra Deep – which went deeper down the Mariana Trench than Rolex – into an in-production watch rather than just a concept, Omega launched this quietly fabulous timepiece.

Hand-wound, with a silver dial inspired by an Omega design from 1939, a small seconds at six o’clock and Omega’s old logo on the dial, it’s a masterclass in subtle sophistication.

The only nod to modern preferences is the increase in case size from 37mm to 39mm. Otherwise, this is a retro reissue that looks like you’ve been spending ages on forums trying to find that perfect vintage model, when all you’ve done is walked into your nearest Omega boutique.

Special mention: most hyped watch of the year 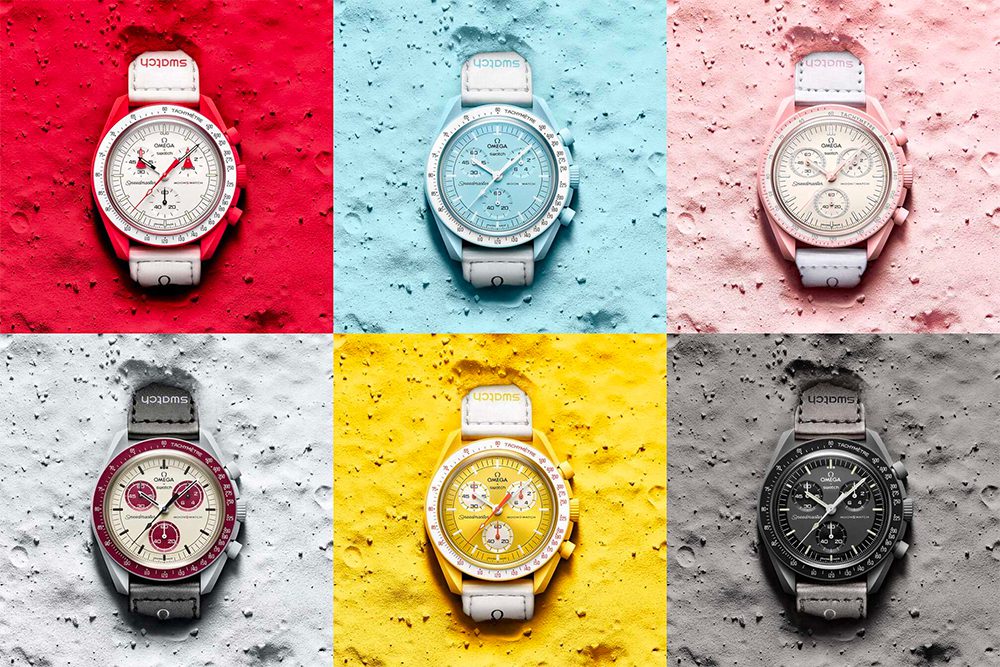 You don’t expect fights to break out over a bit of Bioceramic, but that’s exactly what happened in March this year when the Moonswatch – essentially an Omega Speedmaster in a colourful material – dropped on an unsuspecting public.

In London, police had to close Swatch’s Carnaby Street store; law enforcement was called in to manage crowds in Singapore; there were rumours of a stabbing in the New York queue; and, even now, all 11 models, named after the planetary bodies of the solar system, are still like hen’s teeth.

Was the hype worth it? Definitely. Yes, there have been images of the case dye from the Neptune transferring to people’s wrists – this iteration has now been recalled – and apparently the quality of the straps isn’t great, but people want a slice of history and, as horological landmarks go, this launch is one for the books.