There has been one definite benefit to a year when new watch launches were as scarce as a green-dialled Patek Philippe Nautilius’ – the chance to re-evaluate the classics. We’re not talking about the reissues here. These are the timeless designs that really haven’t changed that much since they were first unveiled.

Obviously, this is a highly subjective list. However, hopefully it will serve as a reminder that buying a new watch doesn’t necessarily mean purchasing something that came out yesterday. Sometimes, a quintessential style is best. This is the watch that launched a thousand imitators. Horological legend has it that it was a late-afternoon call from then-managing director Georges Golay to famed watch designer Gerald Genta, in 1972, about designing a steel sports watch to impress the Italians that led to the Royal Oak’s creation. Whatever actually happened, it was the watch that saved the brand from collapse during the infamous Quartz Crisis and remains its lodestar.

Its design language – steel, sporty with an integrated bracelet – remains one of the most copied. Even Genta couldn’t resist imitating himself when he came to design Patek Philippe’s Nautilius. That’s some serious self-flattery. Andy Warhol wore one unwound because he was in love with the way it looked, while Truman Capote apparently owned seven of them. This design may have been through other iterations – the Americane, the Cintree, the Francaise; it has even been “crashed” and turned Asymetrique – but its recognisable square or rectangular outline with elongated sides that turn into lugs hasn’t changed since 1917, when Louis Cartier saw the treads on a Renault FT-17 tank and felt inspired.

Most brands have one true icon. Omega has two: the space watch and the Bond watch. The Speedmaster was first launched in 1957 and went into space courtesy of Wally Schirra’s wrist in 1962, on the Mercury 8 mission. When NASA wanted to equip its Gemini-programme astronauts with timepieces, they asked brands to submit designs for testing. We know how that went: this bracelet watch – with its sunken sub-dials and raised-edge sapphire crystal – was worn by Buzz Aldrin when he made it to the moon.

The Seamaster, although made in 1948, is synonymous with one man: James Bond. Despite Rolex being Ian Flemming’s timepiece of choice for his 007, Omega took the screen credits when famed costume designer Lindy Hemming decided her new modern, European Bond (as played by Pierce Brosnan) should wear an Omega instead. It is also rumoured she thought the blue dial matched Brosnan’s eyes.

Since then, the Seamaster has accompanied Bond on all his missions and, on a sartorial note, made a very strong case for diving watches with suits. Flemming would never have stood for that. Technically the 8th addition to IWC’s iconic Mark series of pilot watches – the first was the Mark IX in 1936 and there isn’t a 13 or 14 – this is watch design reduced to its most practical essentials.

The numerals are large and legible under any lighting conditions, even total darkness. It has no frills apart from a date window, it is anti-magnetic, has a decent water resistance and is that wonderful timepiece that goes with everything in your wardrobe. In 1953, Rolex launched three watches that were to change the direction of the company from being a maker of dress and all-purpose timepieces, into a name synonymous with sports watches. One of this trio, which included the Turn-o-graph and the Explorer, was the Submariner.

60 years on, this watch – with its rotating bezel, Mercedes hands (added in 1954) and steel bracelet – is instantly recognisable. Even if the chances of seeing a steel one in a retailer’s window is rarer than the chances of Jeff Bezos admitting how much tax he owes. 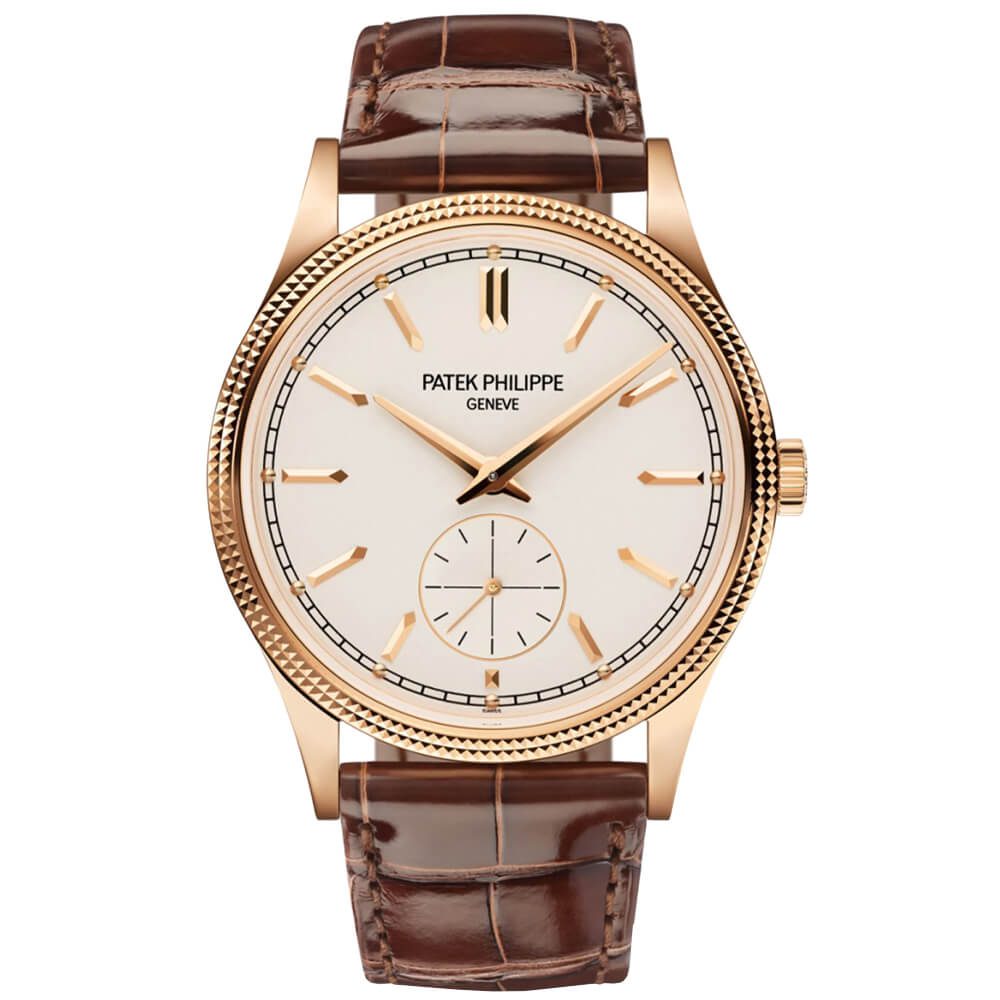 This was the watch that saved Patek Philippe. When the Stern brothers bought the business in 1932, they needed a timepiece that would broaden the luxury watchmaker’s appeal and bring the accounts back into the black. They settled on a dress style, inspired by the Bauhaus school of design: no frills, just the timekeeping essentials.

Aside from the addition of a date, the option of some diamonds, a dabbling with Breguet numerals and the brief foray into a pilot’s Calatrava – more for the officer’s mess than a cockpit – this ür-dress watch hasn’t changed. No wonder it’s the watch of choice for the next generation of Sterns. For some this is the ultimate pilot’s watch. In 1952 Breitling took its Chronomat and added a slide rule. This logarithmic scale measures the three most important units for pilots: STAT for standard mileage, KM for kilometres and NAUT for nautical miles. It’s basically a mini-computer for aviators.

The Navitimer was also the timepiece into which, in 1969, Breitling would put the revolutionary Calibre 11 – the first automatic chronograph developed in collaboration with Heuer and Dubois. And it looks amazing too, from the notched outer casing to the smooth movements of the inner rotating bezel. It’s square, also contained the revolutionary Calibre 11 and was worn by Steve McQueen – when it comes to retro cool, the TAG Heuer Monaco gets all the points. The design was by Erwin Piquerez, owner of a Swiss casemaking business, and it was the first-ever square water-resistant watch. The CEO Jack Heuer was canny enough to get him to sign over the patents and, on March 3, 1969, in New York and Geneva simultaneously, the Monaco was unveiled.

It broke the mould and still continues to standout today, thanks in no small part to its bold dial colours. In a world of similar looking automotive watches, this one takes poll position. Despite appearances, this is a sports watch; one born on the polo fields of India. During the winter of 1930-31, a Swiss watch dealer, César de Trey, was challenged to design a timepiece strong enough to withstand being hit by a polo ball by a British polo player who had just had his watch glass broken by the aforementioned ball. De Trey approached Jacques-David LeCoultre for the movement and Jaeger S.Ato make the case. They roped in French designer and engineer Rene Alfred Chauvot to design the ‘slip and flip’ mechanism. Et voila, watch history made.

It has been made bigger, smaller, had complications added to it, but you should still be able to wear a Reverso on a polo pitch, and a polo bar, with confidence. When Hublot blasted on to the horological scene in 1980, CEO Carlo Crocco decided his first watch needed to make a statement. So, he launched a gold watch on a rubber strap. And it was quartz. Crocco’s rational for the rubber strap was that he wanted ease of use around water, but convention dictated that only lower-priced styles were on rubber, not solid gold ones.

It was a hit and snapped up by Euro royalty. Literally – the kings of Greece, Spain, and Sweden all wore them. For those with movement snobbery, for the Classic Fusion’s 40th birthday it received an internal makeover and is now powered by the Caliber Hublot HUB111. It’s still on a rubber strap.